Netanyahu is out, but do liberal American Jews have anything to celebrate? 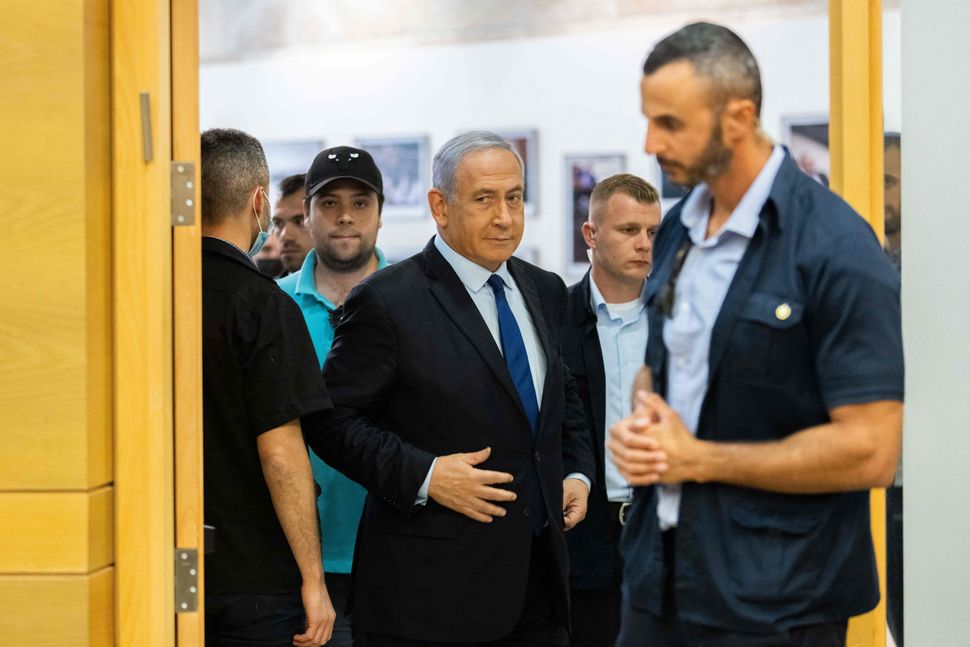 Israeli Prime Minister Benjamin Netanyahu arrives at the Knesset, the Israeli Parliament, to deliver a political statement in Jerusalem, on May 30, 2021. – Nationalist hardliner Naftali Bennett said today he would join a governing coalition that could end the rule of the country’s longest-serving leader, Prime Minister Benjamin Netanyahu. (Photo by YONATAN SINDEL / POOL / AFP) (Photo by YONATAN SINDEL/POOL/AFP via Getty Images) Photo by Getty Images

Matt Nosanchuk was in the White House Situation Room six years ago when word came down that Israeli Prime Minister Benjamin Netanyahu had accepted a GOP invitation to oppose the Iran nuclear deal before a joint session of Congress.

“We were passed a note that informed us for the first time this was happening,” said Nosanchuk, who served on the National Security Council staff at the time. “That was just an outrageous thing for him to do.”

“It really doesn’t matter whose name plate is outside of the prime minister’s office,” said Jeremy Ben-Ami, J Street president.

The Likud chief’s brash and ultimately failed attempt to sabotage the Iran agreement on American soil was indicative of what Nosanchuk, who now runs the New York Jewish Agenda, and other progressive leaders, describe as a pattern of Netanyahu infuriating American Jews.

In addition to the speech before Congress, Netanyahu forged a close relationship with former President Donald Trump and other Republicans, partnered with extremist politicians in Israel and allowed the ultra-Orthodox veto power over questions of religion in Israel. All of this alienated many Jews in the United States, a group which, a new Pew Research Center survey and other polls show, leans left and overwhelmingly votes for Democrats.

With that in mind, many liberal Jews are celebrating Netanyahu’s apparent ouster this week by an ideologically diverse coalition of political parties, even as they acknowledge the new government is unlikely to change much on many issues important to American Jews, including a major sticking point: Palestinian human rights, and Israel’s occupation of the West Bank and Gaza.

“For the sake of the health of Israeli democracy, and also for the U.S.-Israel relationship in the long run, getting Benjamin Netanyahu out of the prime minister’s office is an extraordinarily important move,” said Jeremy Ben-Ami, president of J Street, the liberal pro-Israel group.

But, Ben-Ami said, that is only half the battle.

“It really doesn’t matter whose name plate is outside of the prime minister’s office,” he said. “What matters is the policies that are followed.”

On that front, there is optimism that the planned coalition led by Yair Lapid of the centerist Yesh Atid party, and ultranationalist Naftali Bennet, head of Yamina, could adopt more progressive positions on issues like non-Orthodox conversion and operating public transportation on Shabbat, and that members of liberal parties like Meretz and Labor will have control over portfolios like the environment, police and diaspora affairs.

Rabbi Josh Weinberg, director of the Association of Reform Zionists of America, said he was excited by who was excluded from participation in the new government, including far-right nationalists Bezalel Smotrich and Itamar Ben Gvir, as well as Avi Maoz, of the anti-LGBT party Noam, all three of whom won seats in the March election. He also celebrated the exclusion of ultra-Orthodox parties from the coalition, saying that they had “held the country hostage” on religious issues over the past few years. The absence of those more conservative elements, and a government that will include left-wing parties, makes the prospect of a leader like Bennet, who will serve as prime minister for the first two years of the agreement, more palatable.

“Do I look at Naftali Bennet and say, ‘Oh, he’s a dream come true guy?’ — No, of course not,” said said Weinberg, who is also a vice president of the Union for Reform Judaism. “He’s a champion of the settlements, pro-annexation, all that stuff, but he’s not going to be able to pass that through with the government he has.”

Weinberg also applauded the inclusion of the Islamist Ra’am party, which, though not progressive, may be able to force the Israeli government to improve its treatment of Israel’s Arab minority.

But the question of how liberal American Jews, who overwhelmingly express an emotional attachment to Israel even while rejecting Netanyahu’s leadership, will respond to a new government remains unclear. And fewer of them may be following Israeli politics closely.

For the 12 years that Netanyahu sat in the prime minister’s chair, many American Jews described their connection to Israel with a caveat — they love the country, but not its prime minister. They looked forward to Netanyahu’s ouster, and a replacement government that would enter into negotiations to end to the occupation, help birth a Palestinian state and put an end to wars with Hamas that leave American Jews conflicted. Many during last month’s hostilities found themselves defending Israel’s right to defend itself, but also deploring the suffering inflicted on Gaza, where 256 people were killed in the violence — nearly 20 times more than those who died in Israel.

Israelis in general, American Jews may discover in the wake of Netanyahu’s departure, hold different priorities, and have a very different understanding of what ensures their national security.

Dov Waxman, chair of Israel Studies at the University of California, Los Angeles, said that Netanyahu’s series of governments fairly represented much of the Israeli public’s political preferences and that the new coalition does not represent an electorate that is moving closer to the liberal values held by most Jewish Americans.

“The Israeli public as a whole is becoming less liberal in its views,” Waxman said.

But American Jews — and particularly younger American Jews — seem to be embracing more progressive attitudes toward Israel and Palestinians. Last month a Jewish Democratic senator, 34-year-old Jon Ossoff of Georgia, led the charge in Congress for a cease-fire between Israel and Hamas, a move unthinkable in years past, when American lawmakers left Israel to make military decisions on its own. Thousands of Jews joined in the protests against Israel’s airstrikes in Gaza last month.

And the new Pew survey shows that younger Jews are far less likely than older ones to consider caring about Israel as essential to their Jewish identity — 35% of Jewish adults under 30 hold that view compared to 51% of Jews 50 and older.

In contrast, Orthodox American Jews are becoming increasingly conservative and more closely aligned with the Republican party — and the denominational and political polarization within the Jewish community is closely correlated to views on Israel.

Other observers agree that the post-Netanyahu government is unlikely to change course on the country’s relationship with the Palestinians.

“It’s not just the policies of the Netanyahu government we’ve been opposing, it’s occupation, which obviously predates him,” said Rabbi Jill Jacobs, director of T’ruah, a liberal rabbis group. “We have decades of occupation that precede him and we’re not getting out of that situation any time soon.”

Without any movement on the Israeli-Palestinian peace process, then, American Jews may continue their drift leftward on Israel, a shift also indicated by the growth of leftist organizations like IfNotNow and Jewish Voice for Peace and more centrist organizations including J Street, which recently came out in favor of conditioning some American military aid to Israel.

Netanyahu is out, but do liberal American Jews have anything to celebrate?