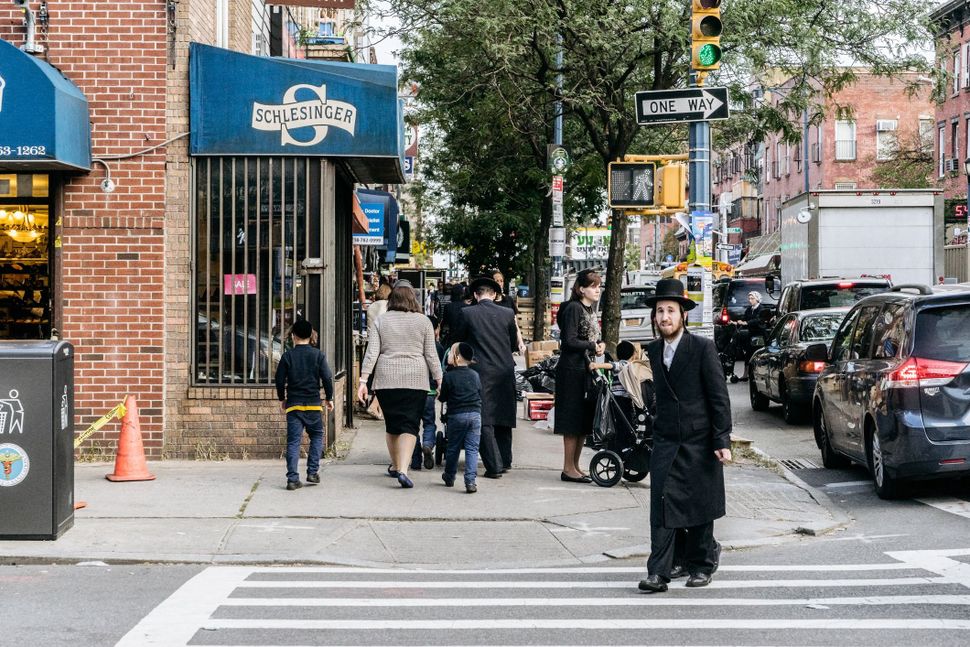 A new, detailed survey of American Jews from the Pew Research Center shows a deepening divide between the Orthodox and the less observant, a rising number of Black, Hispanic and Asian Jews, more intermarriage and growing concern about antisemitism.

The increasingly stark religious and political differences between the Orthodox and other Jews is likely to be one of the most studied findings of the 248-page “American Jews in 2020,” which was released today. It lends credence to a worry common among religious and secular Jewish leaders that the community is splitting into two groups increasingly focused on what separates rather than what unites them.

The study found that 17% of Jews 18 to 29 identify as Orthodox, compared to just 3% of those over 65. Roughly 30% of young Jews identify as Reform and another 41% with no particular branch of Judaism. 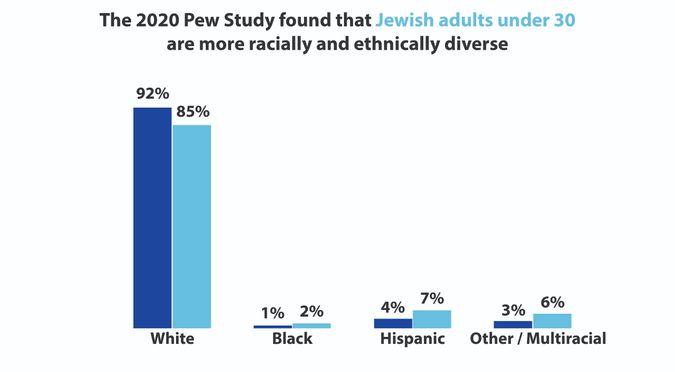 American Jewish adults under 30 are the most diverse of any living generation. (Designed by Laura E. Adkins for the Forward; data from Pew Research Center’s “American Jews in 2020” report)

Jews are also growing farther apart along political lines. The number of Orthodox Jews who identify as Republican increased from 57% in 2013 to 75% in this year’s survey, while 70 to 80% of Reform, Conservative and nondenominational Jews lean toward Democrats.

“The divides between American Orthodoxy and liberal Judaism in America are growing rapidly,” said Rabbi Shmuly Yanklowitz, who leads an organization for progressive Orthodox clergy. “If we don’t create common ground spaces we are going to lose the illusion of there being a Jewish people.”

Like Pew’s landmark 2013 study, which coined the term, “Jews of no religion” to describe what was then considered a surprising number of Jewish Americans who did not relate their Jewish identity to religious belief or practice, the report Pew released today underscores the same disconnect: only 1 in 5 Jews surveyed told Pew that religion is very important to them. That compares to 2 in 5 Americans overall.

The latest Pew survey also shows that the rate of intermarriage continue to grow: 72% of non-Orthodox American Jews who married since 2010 have a non-Jewish spouse. Among the Orthodox, however, almost all — 98% — marry other Jews. 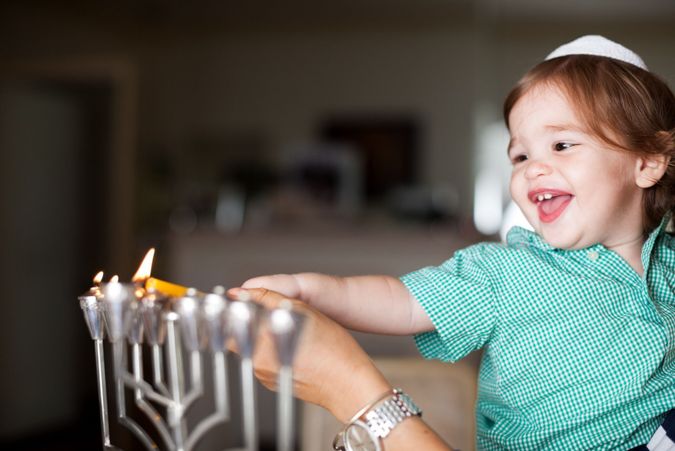 But those concerned that intermarriage means fewer Jews in the future may take heart in another Pew finding: nearly 70% of interfaith couples are raising children to be either religiously, culturally or partly Jewish.

“Intermarriage was once a ticket out of Judaism and today that’s not the case,” said Leonard Saxe, director of the Steinhardt Social Research Institute at Brandeis University.

The study also found that the Jewish population of the U.S. is stable, rising in terms of absolute numbers but remaining about the same percentage of the general population.

Researchers at the non-profit, Washington-based Pew center, which has authored comprehensive reports on other groups, including Catholics and Muslims, also found many commonalities among American Jews.

In general, Jews care about being Jewish. Three-quarters consider being Jewish either somewhat or very important in their lives.

Among attributes most American Jews consider essential to being Jewish, 82% say caring about Israel, with 58% saying that they feel attached to the nation; 76% say remembering the Holocaust; 72% say leading an ethical life; and 59% say working for justice and equality.

This year’s survey, more closely than Pew’s 2013 report, examined racial diversity among American Jews. Eight percent of the Jewish population identify as Hispanic, Black or Asian — or anything other than non-Hispanic white — a share that nearly doubles to 15% among Jews between 18 and 29. These numbers are sure to be closely examined as many Jewish institutions grapple with how to welcome “Jews of color,” though the Pew study did not use that term — which refers to Jews who are not white. Some of those surveyed identified with more than one race. 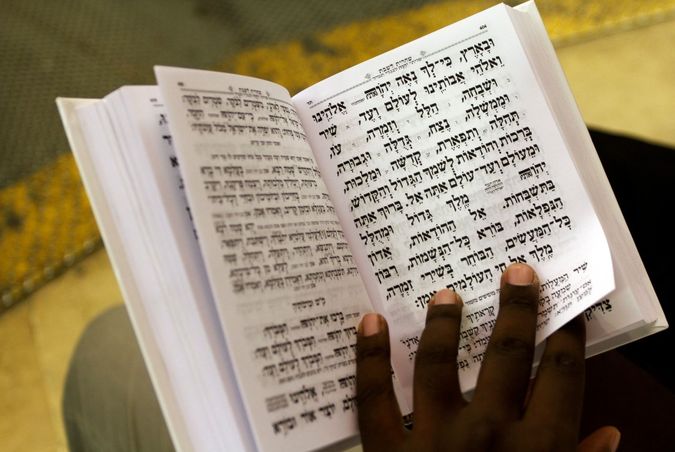 The report also found that 13% of those who responded to the survey said they live in multiracial households. Overall, 17% of those surveyed said they lived in a house where at least one person is multiracial, Hispanic, Black, Asian, or of another non-white racial group.

Two-thirds of Jews identified as Ashkenazi — Jews who follow the customs of Central or Eastern Europe. Seven percent call themselves Sephardic (of Spanish ancestry) or Mizrahi (of Middle Eastern heritage), alone or in combination with another identity.

Denominational identity among Jews held steady when compared to Pew’s 2013 study. Just over half of all Jews belong to either the Reform (37%) or Conservative (17%) movements and 9% to Orthodox Judaism.

American Jews are increasingly concerned about antisemitism, with three-quarters saying there is more antisemitism than there was five years ago and more than half of Jews reported feeling less safe, including 61% of “visible Jews,” most notably the Orthodox, whose attire more easily identifies them as Jewish.

While the survey did not ask which end of the political spectrum Jews saw antisemitism coming from — a hot topic in the debate over how to define antisemitism — it did ask respondents whether former President Donald Trump and the two major U.S. political parties were friendly or unfriendly toward Jews.

Half of American Jews said the Democratic Party was “friendly” to Jews, while just 10% said it was “unfriendly.” In contrast, 37% said Trump was unfriendly to Jews and 26% said the same of the Republican Party. This question exposed one of the sharpest denominational divides, with only 2% of Orthodox Jews saying that Trump was unfriendly to Jews and 60% taking a favorable view of the GOP.

Some observers argue that the gap between Orthodox and less observant Jews goes far beyond politics and is driven by a lack of interaction and understanding between the two groups. Erica Brown, a modern Orthodox scholar, said that Orthodox Jews often have a difficult time relating to Jewish behavior that is not grounded in Jewish law, like keeping kosher or strict observance of Shabbat.

Meanwhile, Brown said Reform Jews find “all of these legal behaviors as small-minded and sometimes threatening,” and said Orthodox Jews were being grouped together and criticized as rule breakers in regard to COVID-19 restrictions.

“Especially now there’s a lot of micro-aggression coming from non-Orthodox movements toward Orthodox Jews,” said Brown, who runs the Mayberg Center for Jewish Education and Leadership. “There are ways that progressives speak about Orthodox Jews that they would never speak about people of color.”

Some argue the gap between Orthodox and less observant Jews goes far beyond politics.

Others played down the differences between Orthodox Jews and those with more liberal practices. Rabbi Rick Jacobs, president of the Union for Reform Judaism, said there were countless examples of Orthodox and Reform clergy collaborating on Jewish programming across the country.

“We don’t all vote, earn, believe, pray the same way,” Jacobs said, “but we share a deep commonality and a mutual interconnection nonetheless and I think that’s profound and I think it’s a beautiful thing.”

But even Jacobs hinted at tensions between the different movements, saying that while Reform Jews made a point to stand in solidarity with Orthodox Jews, the relationship sometimes felt one-sided. “It’s not always reciprocated,” Jacobs said. “But that’s OK. That’s not how we teach our children — to do something because it’s reciprocated.”

Leonard Saxe, of Brandeis’s Steinhardt Social Research Institute, cautioned of making too much of the high-rate of young Jews identifying as Orthodox and said he saw little evidence that there was a growing gap between Jews based on level of observance.

“People have different views about how to enact Judaism. I don’t think it’s a new story” said Saxe, who added that it can be difficult to accurately analyze a group as small as the Orthodox and suggested that Pew might have over-counted the number of young Jews who identify as Orthodox.

Saxe said that his main takeaway from the report is the many different expressions of Judaism Americans Jews reported. “This study reinforces that there are diverse ways to be Jewish in America,” he said.

Roughly half of American Jews who rarely or never attend religious services said they express their Jewishness in other ways, including 74% who share culture and holidays with non-Jews, 63% who host or attend a Passover seder and 46% who fast on Yom Kippur.

The report also painted a nuanced picture of American Jewish attitudes toward Israel. Unlike the 2013 Pew report, this survey asked about the Boycott, Divestment and Sanctions movement, which targets Israel for what BDS supporters describe as its human rights abuses and occupation of Palestinian land. BDS has been aggressively fought by the Jewish establishment. But only a slim majority of Jews surveyed had heard of the movement; 34% oppose it and 10% are in favor. 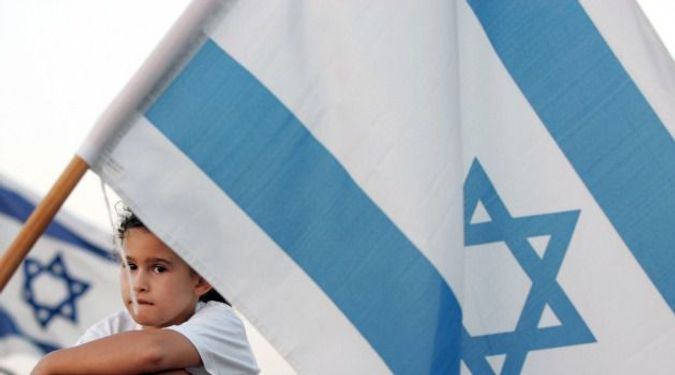 Few Jews believe that either Israeli or Palestinian leadership is sincere about achieving a peace settlement, with a total of 33% of Jews saying that Israel is sincere and 12% saying the same about Palestinian officials. That question was strongly correlated with level of education; 51% of those with a high school education or less believed Israel was sincere while just 21% of those with postgraduate degrees said the same.

The Pew survey was based on interviews with 4,718 Jewish adults between November 2019 and last June. The research center contacted respondents by mail rather than telephone, the method used in the 2013 study, because of falling participation rates in phone surveys. For that reason, Pew researchers cautioned against making direct comparisons between the two surveys, despite the fact they asked many of the same questions and largely yielded similar results. The margin of error for the overall report is 3%, although individual questions may have a higher or lower margin.

Those who agreed to take the survey could complete it in either English, Spanish or Russian.