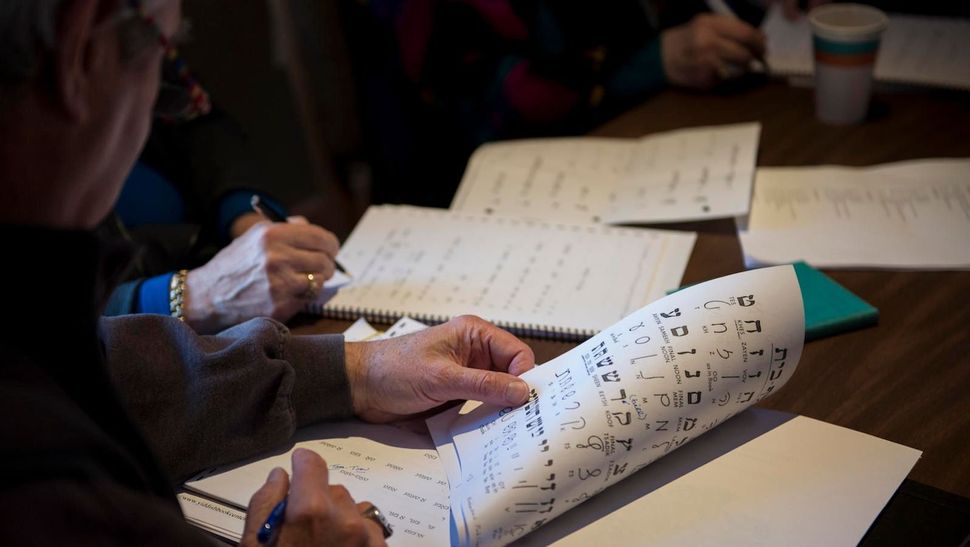 Students review Yiddish characters in print and in script. Courtesy of The Yiddish Book Center

I had good reason to expect this, since the number of people studying Yiddish has increased greatly in the past eight years. Online classes at the Workers’ Circle, which used to attract about 50 students a year, now have more than 1,000 students (no doubt spurred on, at least in part, by the pandemic). Last summer, the intensive Yiddish summer program at YIVO Institute for Jewish Research, conducted online due to Covid-19, reported that so many students registered in the program that YIVO needed to add new sections and hire teachers at the last minute.

The Forward’s own YouTube series, Yiddish Word of the Day, has received about 750,000 views since its inception in April 2020. And when the language-learning app, Duolingo, added Yiddish to its list of 39 languages last month, a quarter of a million people signed up in just two weeks.

It was surprising, then, that the 2020 Pew study has no mention of Yiddish whatsoever.

In fact, 32% of Jewish adults do not consider themselves members of any religious Jewish branch or denomination of American Judaism, and 27% categorized themselves as “Jews of no religion.” This includes those who describe their religion as atheist, agnostic or nothing in particular but who have a Jewish parent or were raised Jewish and say that they consider themselves Jewish in some way – such as ethnically, culturally or because of their family background.

As it did when the 2013 study came out, the ongoing drop in synagogue affiliation among American Jews is bound to elicit lots of hand-wringing among Jewish community leaders regarding the future of American Jewry. But part of the reason these numbers sound so depressing is that we’re assuming that a lack of interest in synagogue life connotes a lack of interest in being Jewish, period.

It fails to take into consideration the many American Jews who may not believe in God, but who identify strongly with the Jewish people and express it through non-religious means, whether it be by chatting with older Jews about the past, collecting Jewish-themed works of art, sprinkling their speech with Yiddish words and inflections or, as mentioned before, actually taking Yiddish classes.

Respondents were asked, for example: “Do you listen to Jewish or Israeli music?” But if the question had been phrased as: “Do you listen to Yiddish or Hebrew music?”, it could have revealed a much deeper Jewish connection among secular Jews that is just as meaningful for them as attending a synagogue service is for more religiously inclined Jews.

If the goal of the study is to try to understand what really makes American Jews feel more Jewish, shouldn’t these options have been included in the study as well?

A majority of Jews, for example, cite remembering the Holocaust as essential to their Jewish identity – a sign that for many, connecting to Jewish history is very important. Furthermore, 52% of American Jews say that being Jewish is a matter of ancestry and 55% pointed to culture either alone or in combination with other answers.

Taking these three factors together – remembering the Holocaust, connecting to one’s ancestry and learning about Jewish culture – this study could have been an ideal opportunity for the researchers to ask the respondents how they, particularly those of Ashkenazi extraction, connect to the rich Jewish culture that had existed in Europe before it was decimated by the Nazis.

The strong connection that Jews feel towards Jewish culture was revealed through other questions as well. About 7 in 10 U.S. Jews say they often or sometimes cook or eat Jewish foods, “making this the most common form of participation in Jewish culture asked about in the study.” Yet the researchers apparently didn’t see this as evidence of Jews connecting to the culture of their grandparents and great-grandparents — because if they did, the question of preparing or eating Jewish foods should logically have led to questions about connecting to Yiddish or Sephardi culture in general.

The creators of both Pew studies on identity have done a tremendous service by giving us a glimpse of how American Jews think and feel. But they need to understand that many Jews are far less connected to religion than they are to Jewish ethnicity, history and culture. By glossing over this crucial aspect of modern Jewish identity, they – and we – fail to see just how Jewish these non-religious Jews are, and how much potential there is in the future of American Jewry.