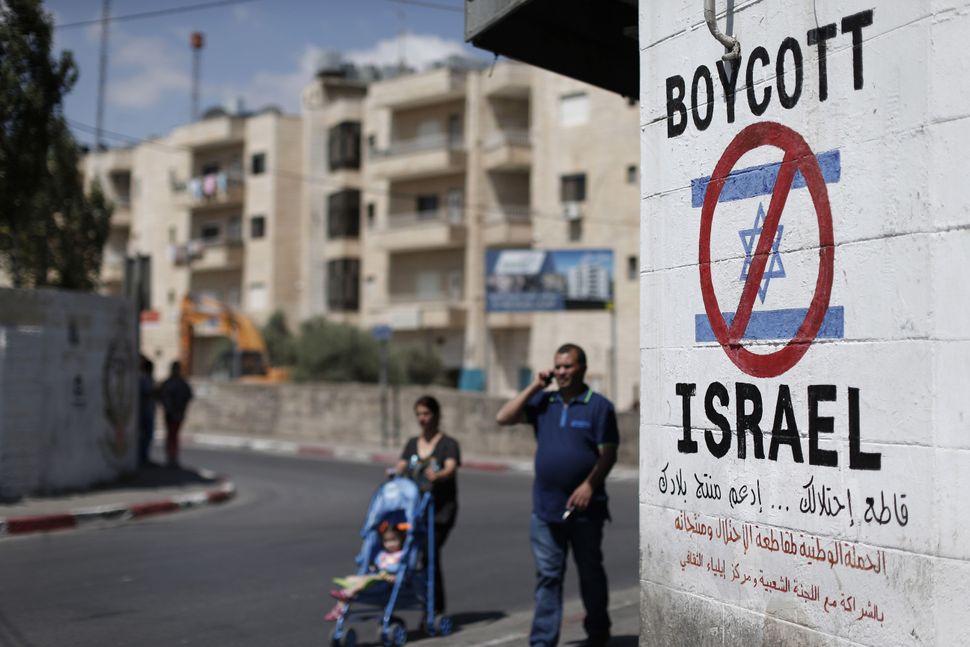 Palestinians walk past a sign painted on a wall in the West Bank biblical town of Bethlehem on June 5, 2015, calling to boycott Israeli products coming from Jewish settlements. The international BDS (boycott, divestment and sanctions) campaign, that pushes for a ban on Israeli products, aims to exert political and economic pressure over Israel’s occupation of the Palestinian territories in a bid to repeat the success of the campaign which ended apartheid in South Africa. Photo by Getty Images

Boycotting Israel and calling for an end to its Jewish majority is not inherently antisemitic, according to a new definition of antisemitism released Thursday by a group of more than 200 scholars of Jewish studies.

The Jerusalem Declaration on Antisemitism represents the latest salvo in the debate over how to define anti-Jewish bigotry and is the most permissive of the mainstream definitions when it comes to attacks on Israel.

“It belongs to the realm of political debate.”

Alon Confino, a Jewish studies professor at the University of Massachusetts Amherst who helped draft the definition, said the document purposely did not take a position on the Boycott, Divestment and Sanctions movement that has been a third-rail issue in Jewish circles for years — or on whether a two-state solution to the Israeli-Palestinian conflict or the establishment of a single binational state would be preferable. Instead, he said, the group intended its declaration to help clarify the bounds of legitimate discourse.

“The JDA does not, of course, insinuate that the Jews do not deserve a state, but merely that denying this right is not in and of itself antisemitic,” said Confino, who is also director of the Institute for Holocaust, Genocide, and Memory Studies at UMass. “It belongs to the realm of political debate.”

The Jerusalem document asks that governments and institutions use it as an alternative to the International Holocaust Remembrance Alliance’s working definition of antisemitism, which Jewish establishment groups have been calling on the Biden administration to adopt in various forms.

Under the IHRA standard, denying Jews the right to self-determination and applying a double-standard to Israel — by, for example, boycotting it but not other nations that engage in similar policies — are both considered antisemitic in most contexts. Supporters of the IHRA definition, which has been endorsed by dozens of leading American Jewish organizations, argue it is necessary to combat criticism of Israel and Zionism that are really, at their core, attacks on Jews.

But critics of the IHRA definition say that its adoption by federal agencies and some universities has had a chilling effect on free speech and that it has been primarily used to go after Palestinians and their supporters over legitimate advocacy work.

The new declaration, which was announced in a Forward op-ed on Thursday morning, seeks to create more breathing room for criticism of Israel by stating that it is not antisemitic to “support arrangements that accord full equality to all inhabitants” of Israel, the West Bank and Gaza Strip — including a binational or other non-Jewish state. It also describes boycotts as “commonplace, nonviolent forms of political protest against states.”

While the document states that it is antisemitic to deny Jews in Israel the right to “exist and flourish, collectively and individually, as Jews,” it does not address an explicit Jewish right to self-determination. That is in contrast to both IHRA and another alternate definition released last week by a group with the endorsement of many liberal American Jewish leaders.

Confino, the UMass professor, said the concept of self-determination was important but that it has so far been poorly defined and inconsistently applied.

“Does it apply, for example, to the Basques in Spain?” he asked. “Or the Kurds who, like the Jews, inhabit different countries? If so, does it mean that they should have their own sovereign state?

“People can argue on either side of this question without being racist,’” Confino added.

IfNotNow, a left-wing Jewish group opposed to the Israeli occupation, praised the new definition and said that it would make space for advocacy and debate around Israel’s relationship with the Palestinians to take place more freely.

“It creates more room for organizing for Palestinian rights and limits bad-faith accusations of antisemitism that have tried to derail Palestinain rights organizing and have obscured the threat of violent right-wing anti semitism and white nationalism,” said Morriah Kaplan, an IfNotNow spokesperson.

Others on the left welcomed the definition with more skepticism. Jewish Voice for Peace, which supports the BDS movement, said that while the Jerusalem declaration was a “welcome alternative” to the IHRA definition, it nonetheless focused too much on Israel.

Palestine Legal, a nonprofit that has defended Palestinian activists accused of antisemitism, said that “politicized definitions” were unproductive.

“The JDA rightly intends to ameliorate the harm that IHRA’s promoters have done in equating anti-Zionism with antisemitism to censor speech,” Dima Khalidi, the group’s director, said in a statement. “But the new definition risks reinforcing the impulse to decide for Palestinians and their allies what is acceptable to say about Israel and Palestinians’ lived experiences.”

The Jerusalem Declaration on Antisemitism (JDA), despite its omission of representative Palestinian perspectives, provides an alternative to the fraudulent IHRA definition in the fight against anti-Jewish racism, discrimination and hostility.https://t.co/EiyMIUme3I pic.twitter.com/FCjlFJm6cn

The Jerusalem declaration also came under fire from at least one liberal Jewish organization that has also taken issue with aspects of the IHRA definition. Joel Rubin, director of the American Jewish Congress, disagreed with the new definition’s approach toward boycotts and a one-state solution.

“I would argue that delegitimization of Israel and calls to boycott, sanction, divest and isolate it without the goal of peace between a state of Israel and Palestinians are in the antisemitic lane,” Rubin said.

His group has adopted the IHRA definition but also signed onto a January letter with the Union for Reform Judaism, Anti-Defamation League and World Jewish Congress cautioning that IHRA had the potential to damage free speech and should not be codified into law. 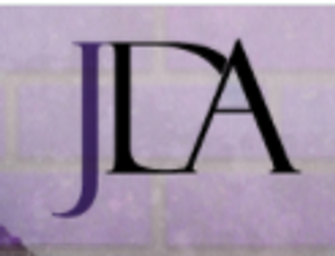 The Jerusalem Declaration on Antisemitism launched with a logo created from a stylized version of its acronym, JDA.

The ADL and the Conference of Presidents of Major American Jewish Organizations, which has led the effort to ask the Biden administration to adopt the IHRA definition, did not immediately respond to a request for comment about the Jerusalem declaration.

The declaration was signed by scholars of Jewish, Israel and Holocaust studies in North America, Europe, the U.K. and Israel. Notable signatories include Na’ama Rokem, director of the Center for Jewish Studies at the University of Chicago; Dmitry Shumsky, director of the Center for the Study of Zionism, the Yishuv and the State of Israel at the Hebrew University of Jerusalem; and Rabbi Jill Jacobs, director of T’ruah, the rabbinical human rights organization.

It is hosted on a slick website dedicated exclusively to the declaration, and including a logo for the definition that stylizes the “JDA” acronym. It is available in English, Hebrew and German.