Allan Gerson and his son David at the Zamosc Memorial site in Paramus, New Jersey, 1998. Courtesy of David Henry Gerson

“When my father was nearly on his deathbed, a last effort at surgery was attempted, and a dutiful surgeon, asking him routine questions, inquired of the cause of his parents’ death.

The puzzled surgeon asked him to explain himself.

“Gas chamber,” my father said. ”They died of gas chamber.”

My brother Sam and I who witnessed the exchange later asked him why he’d been so aggressive in his answers.

“So that he should know who he is operating on,” he said.

He died in 1991 and is buried at the Zamosc Memorial site in New Jersey, his gravestone inscribed: “Ohev Yiddish,” a lover of Yiddish For beyond honoring memory and the fallen, beyond all he had endured, was his acute power to persevere and never let go, finding dignity and revival in the beauty of language and poetry.”

My father, Allan Gerson, wrote those words about his own father, my grandfather, Morton Gerson, in the epilogue of his just-published memoir, “Lies That Matter.” The book is about my dad’s time working in the Office of Special Investigations bringing Nazi collaborators in the United States to accountability.

Those years in the Justice Department, when my father was around the same age that I am now, were formative years for him. While he believed strongly in the necessity and importance of the justice pursued by OSI, he came to have complex feelings about prosecuting aging collaborators —especially as he was just coming to discover his own parents’ choices – including their own falsifications made for the purposes of U.S. immigration – and their own humanity.

On Father’s Day, I find myself looking back to my father’s creative explorations on justice —in addition to being a lawyer and a memoirist, he was also a photographer and sometime poet. I’ve been revisiting his musings on his own father, and thinking about his legacy as a son of Holocaust survivors. And I find myself reflecting on my own legacy as the grandson of Holocaust survivors. Those lines he wrote of his father, “finding dignity and revival in the beauty of language and poetry,” land in my gut today as a fundamental theme and guiding principle. 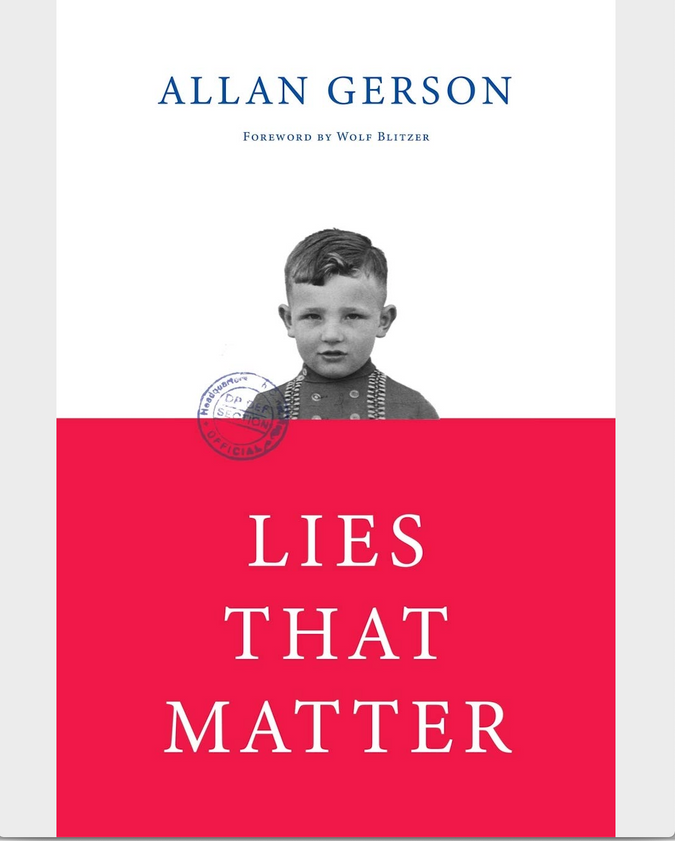 In the final line of my Dad’s book, he writes of another book: a tome, made by the survivors as a memorial to all the Jews from Zamosc, Poland, where his parents were from, who were murdered during World War II. His memoir’s final line reads:

“I recently had the book rebound and cleaned,” my father wrote, “so that its embossed gold and red letters, emblematic of the flames that would engulf that way of life, shine on.”

“Shine on” — his last published words.

My father died on December 1, 2019, quite suddenly of a rare brain disease called Creutzfeldt-Jakob. In September, just before the disease kicked in, he completed the final revisions of his memoir – a memoir that started as a screenplay in 1989, then a novel, then, finally, an intimate, self-reflective memoir.

In his last week on this earth, my mother and sisters and I invited my father’s publisher to see him – we wanted to make sure he knew that his last written words would be published. Then, after he died, we, as a family, began keeping our word.

My mother, Joan Nathan, writes meticulously-researched cookbooks in which food is a key to culture. My sister Daniela is an immigration journalist and professor, and knows much more about the policies of exile and immigration, which she often writes on. My other sister, Merissa, is also a professor and a writer, who has many insights into how to confront loss, and how to process grief. She even wrote a book about it, “Forget Prayers, Bring Cake: A Single Woman’s Guide to Grieving,” which will be coming out in August. I am a filmmaker. 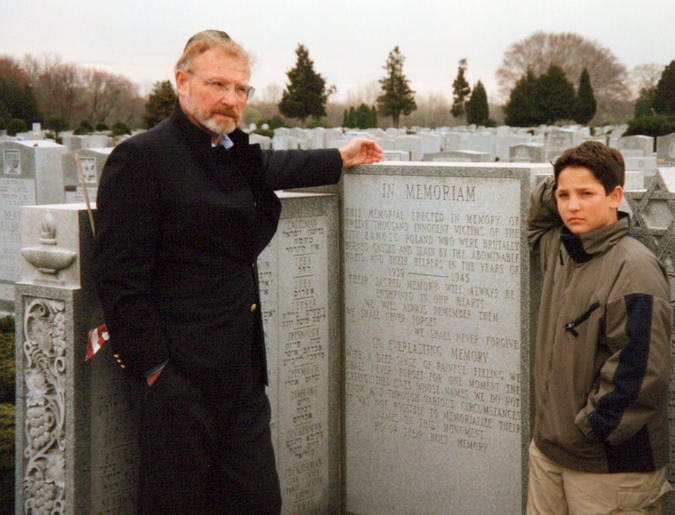 Allan Gerson and his son David at the Zamosc Memorial site in Paramus, New Jersey, 1998. Courtesy of David Henry Gerson

With our disparate skill sets, we became a team with a clear unifying purpose. My mother and sisters each took turns editing and fact-checking the book. I gathered photographs, and helped design the cover. We incorporated two key icons of my father into the front and back of the book: a photo of him as a refugee in the Foerenwald Displaced Persons camp, circa 1948, with the UNDP stamp over his photo. On the back, a photograph of him from his U.S. Attorney badge, circa 1979, with the Department of Justice stamp over it.

We asked Wolf Blitzer, my father’s old friend, to write a foreword. Wolf wrote of their shared love of Yiddish, their shared backgrounds as children of refugees. He explained that my father lived a life driven by the pursuit of justice: prosecuting Nazi war criminals, working in the UN, and eventually becoming known for suing Muammar Qaddafi on behalf of the victims of the Lockerbie bombing. Along the way, my father changed the laws in the U.S., enabling civilians to hold foreign dictators accountable for acts of terror.

I knew all this well, but, to be embarrassingly honest, I had never read a single draft of his memoir (nor the novel version, nor the screenplay). I promised myself not to read the book until it was published – as a means of ensuring that it would, in fact, get published. But frankly, I knew little of his time in the OSI. The time in his life that he spent 30 year struggling to write about was a mystery to me.

Today, though, just before writing this, I at last finished reading my father’s final work. For a parent to leave their own story behind, in their own voice, for their children, is a beautiful gift. I read the book, and instantly my father was alive again.

While I was working with my family to put the final touches of my father’s book together, I was also simultaneously working on a new film, “The Story Won’t Die,” a documentary about Syrian musicians, painters, dancers and other artists in exile, which has its U.S. Premiere on June 26 at AFI Docs.

While the differences between my grandparents’ experiences as Jews fleeing Poland and theirs as Syrians fleeing their homelands are myriad, the similarities were great. To film the project, I spoke often to the subjects about my father, and about his father, about fleeing and about finding artistic means of processing the past. In many ways, making this film was an attempt to understand the roots that my father, and his father grew from. 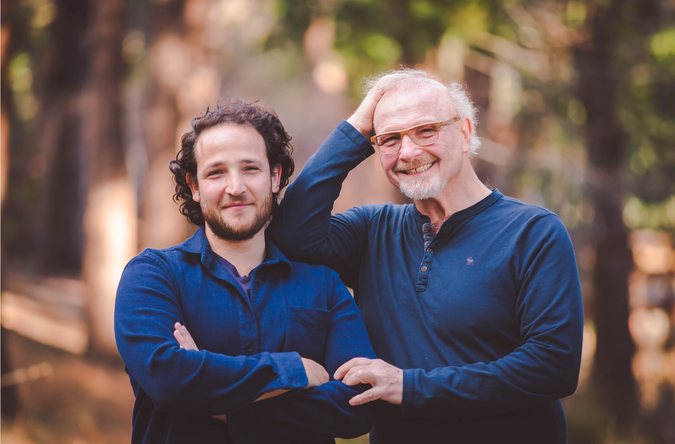 David Gerson and his father Allan Gerson in 2018

When my Dad died, these Syrian artist friends became the sources of some of my greatest comfort. They understood grief and exile. And they understood, creatively, what my father meant to me.

I have learned (and continue to learn) to process the loss of my father, and all our history he represented, in much the way he wrote of his own father, in “finding dignity and revival in the beauty of language and poetry.” And as I close the chapter on my father’s creativity, and witness the blossoming of new creativity, I am comforted by the opening words of my new film, which came from some of my father’s last clearly spoken words to me.

After the first week in the hospital, I turned to him and said, “Dad, I am going back to California soon. I’ll be thinking of you.”

He stopped me, and with a wry smile he said:

“It’s not what you think about a person when they are gone, it’s what you create inspired by them.”

He faded away over the next few weeks. I believe those words never will. May my father, and his father, may all fathers, shine on in our creations.