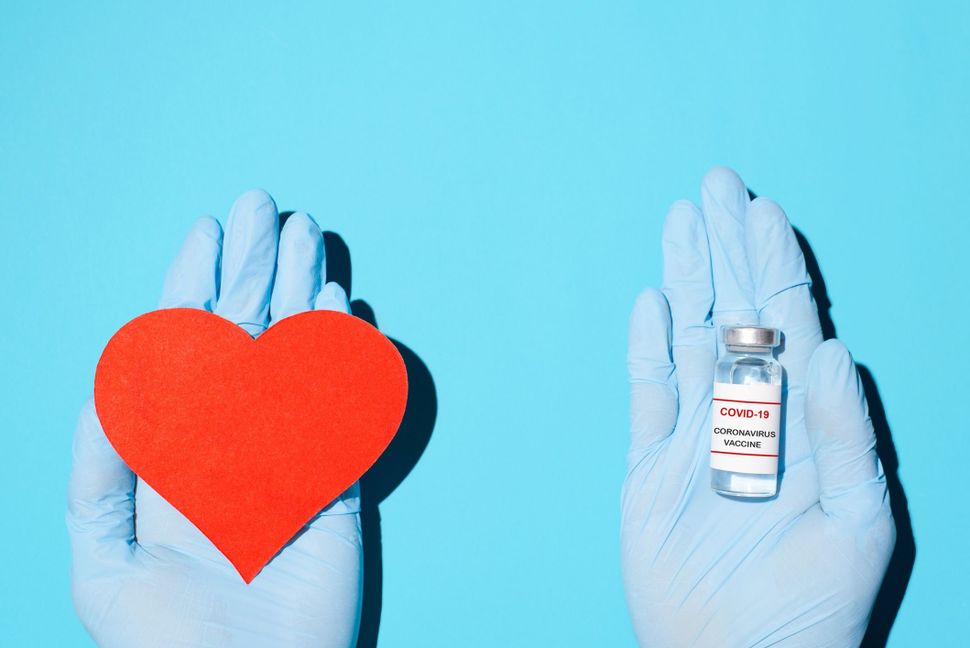 The impromptu matchmaker is providing services free of charge. By Sergey Dementyev//Getty Images

Three decades ago, Israeli real-estate agent Daniel Michael was set up with his wife by a neighbor with a knack for matchmaking. Now, Michael is providing the same service, but for a niche demographic: Jewish singles who have opted not to get the COVID-19 vaccine.

Prior to last month, Michael had little experience with matchmaking. Since then, he claims to have spoken with more than 100 single Jews, most of whom contacted him after seeing a social media post he made offering his services “for people who did not get ‘The Shot,’ who are looking for a like-minded mate.”

“There are many singles who are only interested in someone that is not getting the shot,” Michael said. “And I figured maybe I’m the one to put them together.”

Jerusalem-based hairdresser Shaina Schwartz has used matchmaking services in the past, but said in a recent interview with the Forward that Michael’s service is more casual. The 37-year-old single woman reached out to Michael after seeing his post circulate around WhatsApp — and following a series of phone calls, she has plans to meet up with a potential match.

“Daniel’s a person that listens and really tries to help. I’m hoping for whatever Hashem really wants for me, and to enjoy the journey,” Schwartz said, using the common Jewish term for God. “I don’t have expectations; you never know what can happen.”

With roughly 57% of its population fully vaccinated, Israel has led the world in immunization rates. In recent months, local restaurants, schools and nightlife scenes returned to a sense of normalcy. More than 2.2 billion vaccines have been administered worldwide, yet vaccine hesitancy affects the prospect of herd immunity in Israel and the United States alike. As of late May, the Kaiser Family Foundation found that 13% of Americans say they will “definitely not” accept a vaccine, with 7% saying they’ll take one “only if required.” The Pfizer-BioNTech vaccine, the most widely used vaccine in Israel, tested 95% effective at preventing serious cases of COVID-19 in clinical trials. Moreover, the CDC has determined the COVID-19 vaccines to be safe after evaluating tens of thousands of participants in clinical trials. More than half of all Americans — 171 million people — have already received at least a first dose.

Still, Michael is part of a relatively small but vocal share of Israeli adults who are choosing not to get vaccinated. Michael attributes some people’s skepticism in the vaccine to distrust in government, public health officials and media organizations.

“Wherever the person is who needs this, they are likely among people in their community who think that they are pariahs or the crazy ones— ‘the conspiracy theorists,’ they like to call us. They think there’s no one else out there,” Michael explained of his matchmaking services.

Professional Jewish matchmaking services typically cost thousands of dollars, but Michael is providing his impromptu offering free of charge, though some couples may follow through with the Jewish tradition to donate shadchanus, a payment to express appreciation to the matchmaker, known as a shadchan, if they get married.

Based out of Ramat Beit Shemesh, a city about halfway between Jerusalem and Tel Aviv, the grandfather of two said he’s helped singles from as far away as Africa, Europe and North America, with clients between the ages of 19 and 65. Each person gets a page in his three-ring binder, where he matches people together based on their age, location and religious level. Prior to setting singles up, he sends a document explaining his thought process. 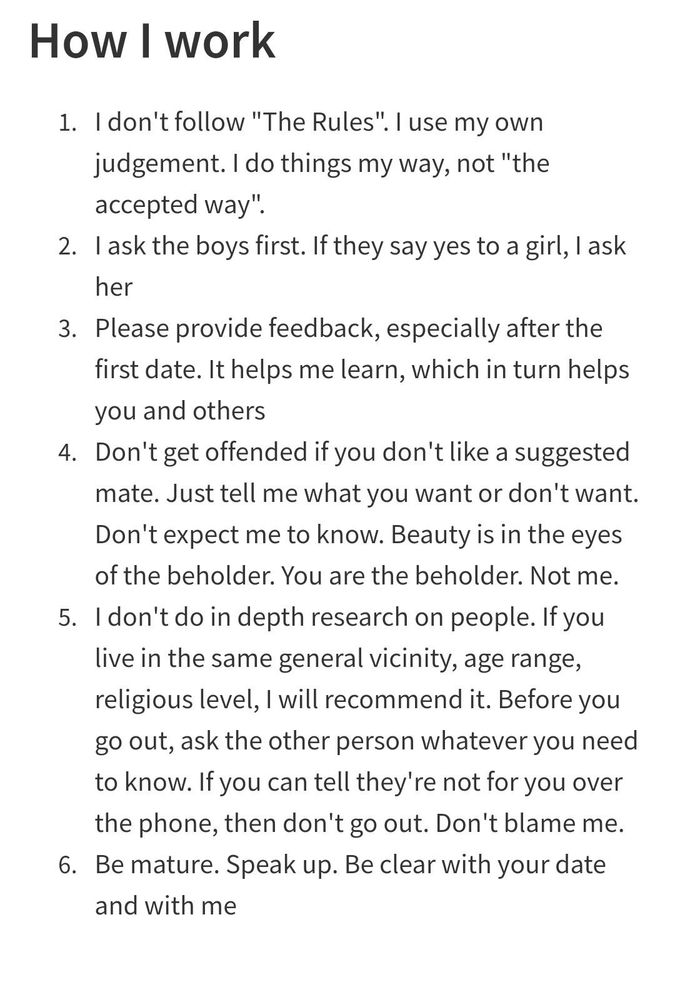 The document Michael sends to singles to explaining his matchmaking thought process. Courtesy of Daniel Michael

Like Michael, Schwartz distrusts the COVID-19 vaccine, and feels people are getting vaccinated not because they really believe in it, but because they are forced to in order to fit into society. The Modern Orthodox woman said finding others with the same vaccination views as her is important in a significant other.

“At first I thought it was crazy, but then I actually sat with it and I thought about it and was like, ‘No, this is your future Shaina, this is the way you’re going to raise your children, this is going to affect your whole life,’” Schwartz said. “When you truly believe in something you have to stick by it.”

Michael explained that his service is less about his political stance on the vaccine and more about finding a way to help a group of people in a community where the dating pool of eligible singles has shrunk. Upon receiving what he says are hundreds of messages from friends and strangers alike, he feels successful in that he is helping a group that may otherwise be ostracized find like-minded others.

“They think there’s no one else out there and now that they see me and my ad they see, even if it’s just to talk to me, that they’re not alone,” Michael said.