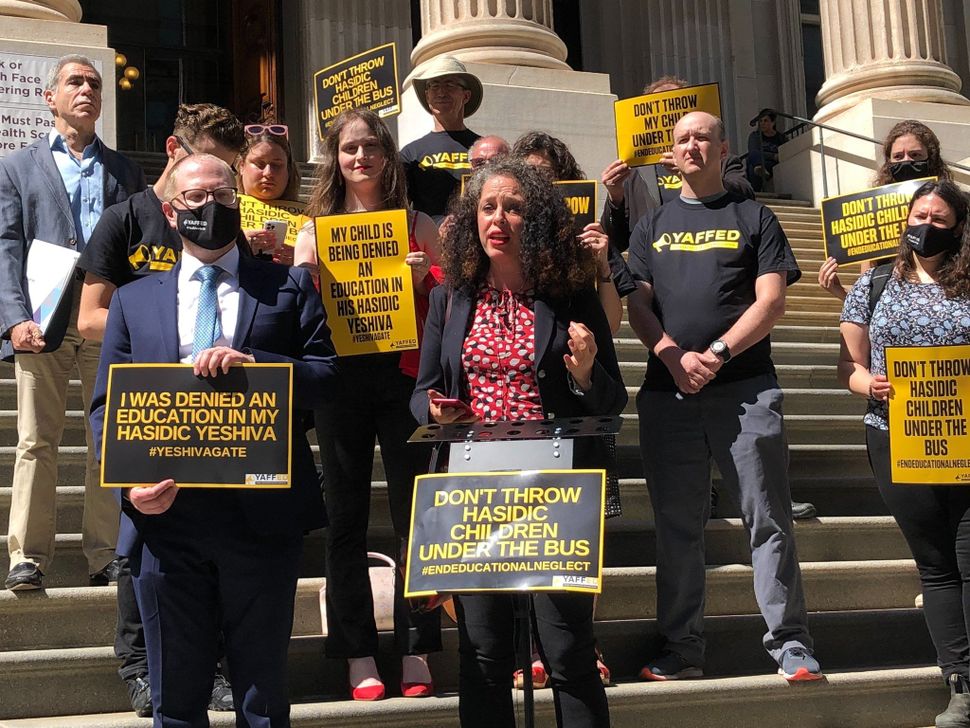 Activists and former yeshiva students at a rally in lower Manhattan. Photo by Jacob Kornbluh

The vast majority of registered Democrats support requirements for secular education at religious yeshivas, according to a new poll commissioned by the advocacy group YAFFED that was released Wednesday.

The poll, of 570 people reached from May 21 through June 6, found that more than 80% of New York City’s Democrats either strongly favor or somewhat favor “requiring that students in private schools get basic education in secular subjects that is at least substantially equivalent to what public schools offer.”

There were only three Haredi, or ultra-Orthodox Jews, among the sample, out of 186 total Jewish respondents.

The poll’s findings appear designed to convince mayoral candidates that generating Hasidic support by either remaining vague on or expressly supporting some religious yeshivas that offer paltry secular educations is not the only road to a Democratic primary victory that all but promises a seat at City Hall in blue New York City.

“Candidates would be wise to adopt stances that not only align them with a huge swath of the electorate, but that also ensure that students across New York—regardless of where they go to school—are equipped with the knowledge and skills necessary to access livable wage jobs or pursue higher education,” said Naftuli Moster, the head of YAFFED, in a written statement.

A New York City Department of Education investigation found in 2019 that only two out of 28 yeshivas it examined were found to meet substantial equivalency guidelines that require private schools teach secular subjects like English and science.

After repeated delays, the state’s Board of Regents is supposed to release revised regulations by the end of the year that will give the state power to enforce the substantial equivalency requirements.

Opponents of the proposed oversight rules say the government is overstepping its bounds, and some cite the adequate or more-than-adequate secular studies programs at Modern-Orthodox and other yeshivas rather than the Hasidic ones targeted by the probe. Others admit that many Hasidic yeshivas do not provide secular studies, but that schools should have the right to teach exclusively religious subjects.

The two mayoral frontrunners, entrepreneur Andrew Yang and Brooklyn Borough President Eric Adams, have appeared to be neck-in-neck for endorsements from Hasidic and other Orthdox leaders, in part because of their fervent defense of the religious yeshivas.

In April, Yang, who told the Forward that “we shouldn’t interfere with their religious and parental choice as long as the outcomes are good,” earned the endorsements of state Assemblyman Simcha Eichenstein and City Councilman Kalman Yeger, who both represent the Hasidic neighborhood of Borough Park. In May, Yang won the support of both of Williamsburg’s dueling Satmar factions.

But after Adams in Mishpacha, the Orthodox magazine, in late May warned that “the worst thing you can do right now is abandon your old friend,” and surged in the polls last week, the minority Aroni Satmar faction switched its endorsement to him.

It’s unclear if the poll will have an impact on the frontrunners. On the day of the poll’s release, both Adams and Yang visited the Aroni Satmar faction’s leader.