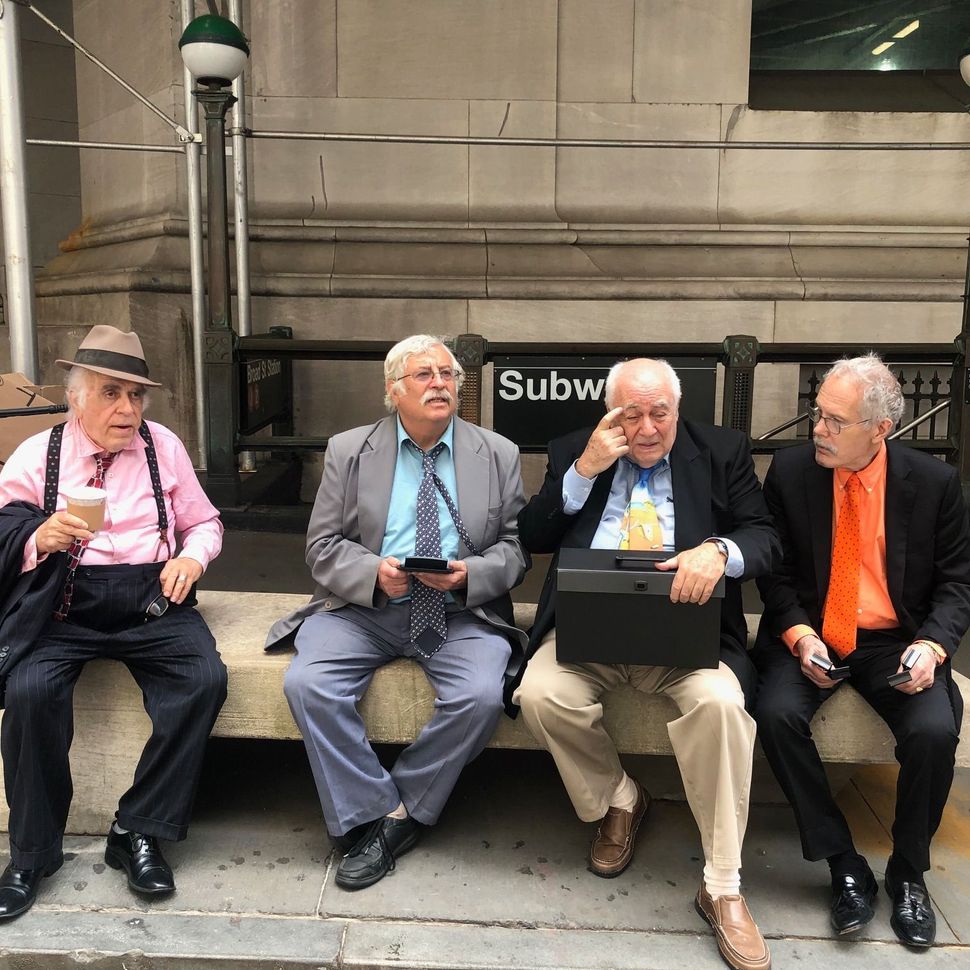 Old Jewish men are a unique species all their own. Few depict the phenomenon better than the Instagram and TikTok accounts ‘Old Jewish Men’ with more than 50,000 followers between them.

The posts range from an old Jewish man kvetching about lox prices with a DIY cardboard sign reading, “MAKE LOX $2.99 PER POUND AGAIN” to candid pictures of old Jewish men caught off guard at a baseball game or on the streets of New York, often with balding heads and furrowed eyebrows. Another features a video of an old Jewish man sauntering down the beach, scantily clad in a two piece swimsuit; as one user commented on Tik Tok, it’s like “Larry David but tan and wearing a bikini.” Their most recent endeavor is one that’s likely to have a strong backing: a petition for more public toilets in New York.

The group has gained traction in recent months for its antics and branded merchandise, earning features in the Cut and Vogue for their “Ralph Lifshitz” Ralph Lauren spoof T-shirt and stylish “OJM solar” shades. Despite the account’s undeniable fame, its origins are notably mysterious: turn to the “About” page of the website and the only image is of a shirtless man smoking a cigar in all of his old Jewish man glory.

In a surprising turn of events, the mastermind behind the profile of ‘Old Jewish Men’ is actually, well, not an old Jewish man at all. He’s a millennial screenwriter. We caught up with founder Noah Rinsky, a self-described “future old Jewish man,” to chat about the account’s growing traction.

How did “Old Jewish Men” start?

I started the account about five-and-a-half years ago when I was visiting my parents who retired in northern Israel. I was just recording videos of my dad around the house, and when I came back to New York there seemed to be a lot of response about him, but I was out of materials so I just changed the handle from ‘DadAroundTheHouse’ to ‘OldJewishMen.’ I just went all over the Lower East Side for years taking pictures of old Jewish men and posting them. Back then, a lot of material was from hassids because I lived underneath a shul.

What kind of reaction has the account garnered from your friends and family?

At first, people thought I was wasting my time. People always thought it was really just very weird, because I would always be hanging out with people and I would say, ‘I’m sorry I gotta go, I gotta chase that guy down.’ You know, and that would happen all the time. And they’d be like, ‘Dude, what are you doing?’

So where do you find the old Jewish men?

They’re people I approach in public, family friends; I’ve done casting calls, sent direct messages to people to try to get in touch with their parents and grandparents. I’ve travelled a lot trying to hit the beaches and talk to old Jewish men, all kinds of stuff.

Wow. What’s your success rate in getting photos?

The good thing about running this account is that these guys, they’re not the fastest guys in the world, so you can usually get the shot. You just have to get a little bit ahead of them. So that’s helpful that I kind of have that to my advantage.

What’s been your favorite video so far?

I think the stuff we did on Wall Street was my favorite. We got some bits of the guys on the trading floor that were really funny, listening to the soundbites from that was probably my favorite moment so far.

Do you draw inspiration from any particular old Jewish men?

Oh man, there’s just so many. Henry Winkler, Jerry Adler, Harvey Keitel, Judd Hirsch, Richard Lewis, James Caan, Billy Crystal, Jackie Mason, Albert Brooks are some. I think when I started the account, that in a lot of ways, what I was going for is trying to create a world that appreciated the irreverence of the old Jewish man. The way they act and dress completely ignores the rest of the world. They just exist as if nothing else around them is there. I think that’s what people respond to a lot of with Bernie Sanders and Larry David, I mean, the reason why that Bernie Sanders image of him at the inauguration is so compelling is that there is no one even looking at him, he’s just sitting there as if he’s not being broadcasted to 50 million people or whatever, he just exists in his own atmosphere, and I think that’s what’s so great about being an OJM.

My best friend is my dad. So I think that I’ve always kind of wanted to more or less pay tribute to who he is, you know, what the breed of men his age are. He’s a little bit less schlubby than I would like him to be, he’s in decent shape and he’s kind of on the good-looking side. I would probably cast him in one of these things but I wouldn’t be too happy about it.

Is there a possibility that some of these old Jewish men may not actually be Jewish?

Old Jewish Men is a vibe. Yes, it helps to be Jewish, but some guys just have it. It’s a whole mishmash of junk that somehow goes together well and is unique to them. And it’s obvious when you look at it that what they look like or who they are is so unique to them that it really couldn’t belong to anybody else, that they’re not pandering, they’re not trying to be anything they aren’t. I think it’s really a confident way of being. It doesn’t mean that you’re necessarily Jewish, it just means you have this way of living that is very OJM.

Are there any future plans for “Old Jewish Men”?

We’re in the process of filming a show, actually. We just casted a bunch of guys and a short pilot has been written and we start filming in July. It’s a very independent project, we’re more or less bootstrapping it. A lot of it will be about these old Jewish men working together in an office, it’s about a group of old Jewish men who work together at a hedge fund called OJM Capital.