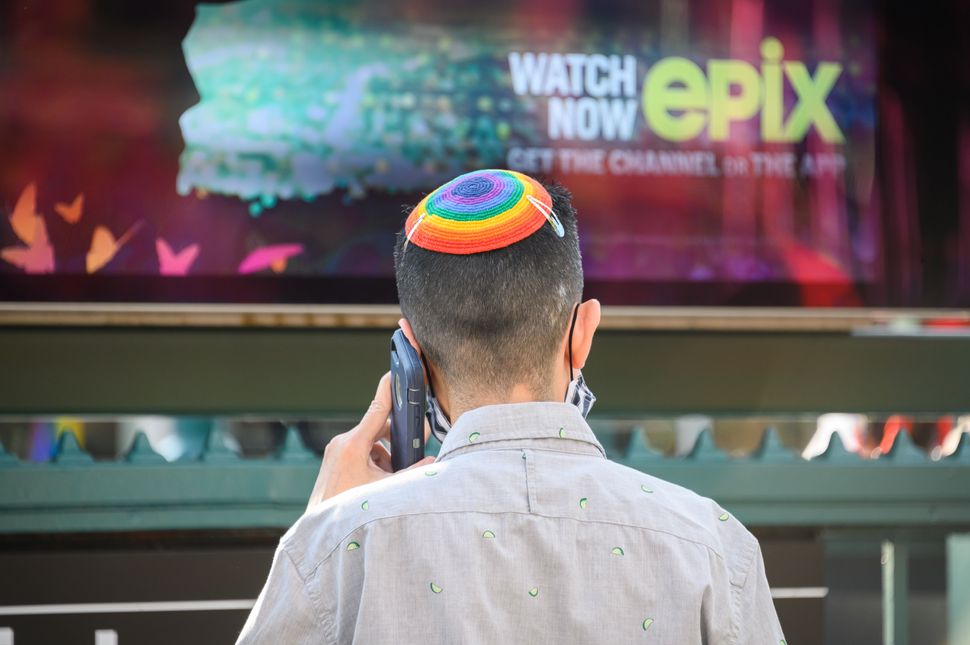 A person wears a pride themed yarmulke in the West Village on June 26, 2020 in New York City. Due to the ongoing Coronavirus pandemic, this year’s pride march had to be canceled over health concerns. The annual event, which sees millions of attendees, marks its 50th anniversary since the first march following the Stonewall Inn riots. Photo by Getty Images

But the demand for religious spaces where gay, lesbian and other queer Jews could gather didn’t disappear. Two years later, Beth Chayim Chadashim was founded in Los Angeles with more robust support — including an assist from the Reform movement — and became the first sustained “gay synagogue.” By the mid-1980s there were at least two dozen synagogues serving LGBTQ Jews not only in meccas like New York City, San Francisco and Los Angeles but in cities like Denver, Cleveland and Houston.

Today, many of those institutions have disappeared altogether and those that remain have spent recent years grappling with how to define themselves now that most non-Orthodox synagogues across the country openly welcome LGBTQ members and straight Jews are increasingly interested in historically queer congregations.

“The best problem for an LGBT-founded synagogue is that too many straight people want to join that it prompts a conversation like, ‘Are we still queer?,” said Rabbi Caryn Aviv, who co-edited an anthology about queer Jews 19 years ago, at a time when she said some community leaders insisted “there are no gays here and they’re not welcome,” and others said “everybody’s welcome — but don’t hold hands in the pews.”

“It’s been pretty amazing to see that change in the span of just one generation,” Aviv said.

With the liberal denominations including the Reform, Conservative and Reconstructionist movements ordaining and placing LGBTQ clergy at pulpits across the United States and JCCs offering packed calendars of events for Pride Month in June, some diversity advocates have shifted their focus to welcoming non-white Jews. The Union for Reform Judaism and Reconstructing Judaism both recently hired diversity directors with mandates focused largely on racial equity.

Rabbi Sandra Lawson, director of racial diversity, equity and inclusion at Reconstructing Judaism, said the relatively swift acceptance of LGBTQ Jews in recent years was made possible partly because American society was likewise becoming more inclusive toward queer people, and because many straight Jews have gay or lesbian family and friends.

“We’re doing a pretty good job of being less homophobic in our Jewish spaces,” said Lawson, who is both queer and Black. “The slowness with which this is happening with Black and brown people is because in our society white people and black and brown people are so segregated.”

Some historically LGBT synagogues are defining their contemporary mandates in ways that may make them more hospitable to non-white Jews and others who have felt shut out of Jewish life. Joshua Lesser, rabbi emeritus of Atlanta’s Congregation Beit Haverim, said that his synagogue sought to explicitly connect its gay roots to the current racial justice movement.

“From our experience, we understand more deeply the imperative of coalition building and being able to work for civil rights,” said Lesser.

Taking a more expansive view of the role of LGBT synagogues is part of an effort to “rethink what queer means,” according to Gregg Drinkwater, a historian at Rutgers University who has studied gay synagogues.

“‘Queer’ more broadly is a space that actively — proactively, aggressively — celebrates people who feel that they are on the margins,” said Drinkwater, “and that can be anyone.”

One example of this philosophy in action can be found at Congregation Sha’ar Zahav in San Francisco, which was created by a group of gay men in 1977 and still has an overwhelmingly LGBTQ membership — 77% according to a recent survey. But Sha’ar Zahav has also become a hub for people in the Bay Area interested in converting to Judaism who find the synagogue to be an especially welcoming place to take that plunge.

Mychal Copeland, the congregation’s rabbi, said LGBT advocacy in the 1970s ran parallel to the feminism movement within the Jewish community and in recent years it has, to a lesser degree, dovetailed with advocacy around interfaith couples when it comes to questions over what counts as a Jewish family. But inclusion for LGBT Jews doesn’t always extend to people of color, people with disabilities and other groups that have faced similar discrimination. Copeland said people in interfaith relationships have also been excluded, and noted that many rabbis who happily marry same-sex couples have no interest in interfaith unions.

“It’s not like we opened one door and other doors swung wide open,” said Copeland, who has performed many such ceremonies and previously worked for 18Doors, an interfaith Jewish group.

Recognizing that the door has been opened in most of the Jewish community, some leaders are pivoting from calls for inclusion to calls for advocacy. Idit Klein, president of the LGBT equality organization Keshet, said one of her current priorities is convincing synagogues and other Jewish institutions that a “basic level of inclusion” is insufficient. Instead, Klein said, they need to support legislation that protects LGBT people from discrimination and speak out on behalf of transgender youth who are targeted by conservative lawmakers.

“That is the work of today: pushing communities to move from looking solely at their own internal dynamics and toward, ‘What is our responsibility in terms of how we show up in public life?’” Klein said.

There is a special urgency behind that call for public advocacy as a battle over transgender rights plays out in the public arena, testing Jewish institutions that have been slower to accept transgender Jews than gay and lesbian members.

Klein has also encountered new roadblocks. Where ten or fifteen years ago, Jewish leaders expressed concerns that embracing LGBT Jews would alienate Orthodox members of the community, she now hears fear that marching in a Pride parade or allowing the creation of a Gay-Straight Alliance will anger politically conservative Jews.

“We were told flat out by some institutions that they couldn’t work with us because they were concerned about alienating the Trump supporters on their board,” Klein said. She described one incident in which teachers at a Jewish day school were told to remove stickers that said “LGBTQ safe zone” from their classroom because they were viewed as partisan.

The Orthodox Jewish community — which turned increasingly conservative during the Trump administration — has moved more slowly than liberal movements on LGBT inclusion. The organization Eshel was founded a decade ago to promote acceptance of LGBT Jews within Orthodox congregations and Rabbi Steven Greenberg, the founding director, said he’s seen significant progress in recent years. As the Orthodox approach to homosexuality evolved since the 1980s from one that treated it as sin toward viewing it as a more generic “difference” that individuals should not be blamed or attacked for, many day schools and synagogues have taken steps to stop the bullying of LGBT children.

But it has been more of an uphill battle within the adult population, where the heterosexual family unit is still the dominant and almost exclusive model for Orthodox adulthood.

“Compassion exists but no one yet is offering a credible adult life to queer people,” Greenberg said. “The synagogue doesn’t really know yet how to represent us.”

No Orthodox denomination has sanctioned marriage equality and Greenberg said that’s not a focus of his organization. Instead, Eshel encourages “commitment ceremonies” for gay and lesbian couples and said that roughly half a dozen Orthodox rabbis have begun performing them. Greenberg’s approach is focused on meeting Orthodox Jews where they’re at and, while he said the rightward drift in Orthodox politics hasn’t directly impeded his work, the organization is careful to avoid potential triggers for Republicans. For example, they don’t encourage people to share their gender pronouns at Eshel events to avoid rankling those who associate the practice with liberal identity politics.

“We tend to avoid those debates,” Greenberg said. “We are attempting to solve problems pragmatically.”

The leaders of some shuls say it is the desire to not have to compromise any aspects of their identity that keep queer Jews coming back to the congregations that continue to proudly identify as LGBTQ.

Copeland, at Sha’ar Zahav, said she was struck by what she saw at the synagogue’s services before she took over as rabbi. One evening a trans member told his story of coming out in an evangelical family; on another, a gay couple celebrating their wedding anniversary lit Shabbat candles. Neither event drew the kind of attention it might have at a predominantly straight congregation.