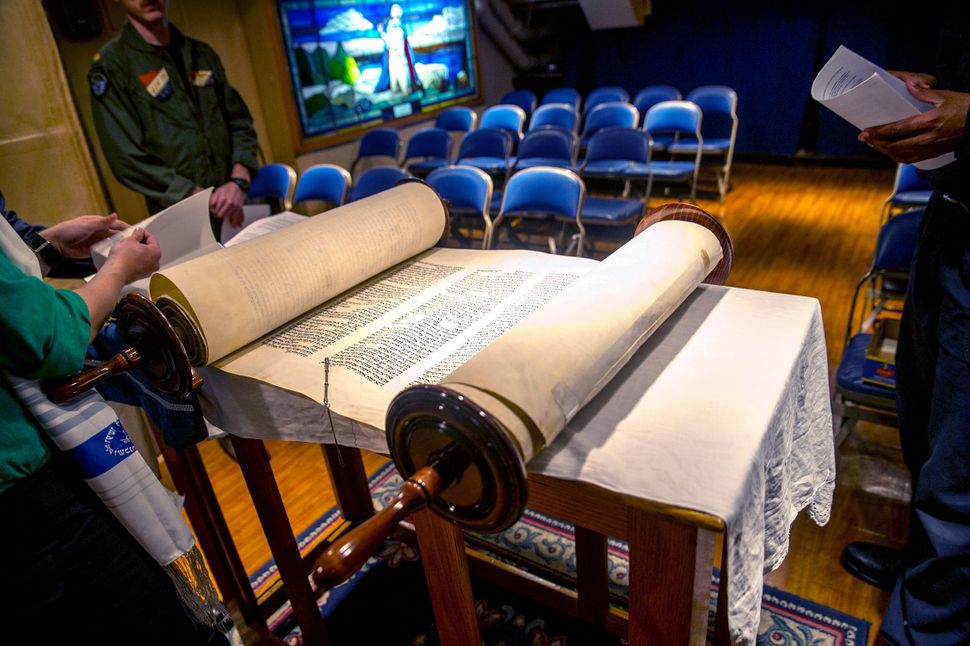 Sailors prepare to read from the Torah during Shavuot Service in the chapel aboard the Nimitz-class aircraft carrier USS George Washington. The Defense Logistics Agency helps ensure chaplains have the items they need so service members can practice their religious faith wherever they’re stationed. Photo by Navy Petty Officer Seaman Brian

For the past nine years, Rabbi Mitchell Nesenoff has been asking synagogues if they would donate one of their Torahs to him for use in his congregation, Temple Adat Yisrael in Lagos, Nigeria. None agreed.

“When you represent a synagogue in Nigeria, people don’t believe you,” he said. “Nigeria has a terrible reputation because of all the fake emails.”

Prior to the COVID-19 pandemic, Nesenoff, a full-time resident of Dix Hills, L.I., had flown to Lagos as many as 15 times a year to serve as spiritual leader of his congregation’s 50 families. The congregation has been using a two-foot tall $25 Torah printed on paper. Until he arrived, the congregants believed it was a real Torah.

“I have done 15 Zoom presentations about my Nigeria congregation in which I asked anyone who has Jewish items they are not using to please send them to me for my congregation,” he said. “And when they ask what I need, I tell them a Torah.”

Recently, a “friend of a friend” connected Nesenoff with someone in Maryland who had a Torah in his home that was not being used. He donated it to Nesenoff, who is now preparing the Torah for shipment to Lagos. 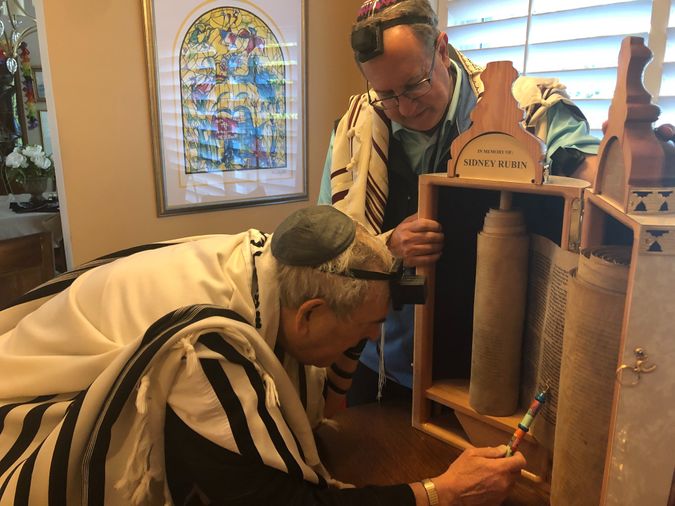 Rabbi Mitchell Nesenoff (left) with the Torah that was donated to his synagogue in Nigeria. Stewart Ain, author of this article, looks on. Photo by Meryl Ain

Temple Adat Yisrael and other congregations across the world are often at the mercy of the marketplace when searching for a Torah. The scrolls can cost in the tens of thousands of dollars and, unless a generous donor steps up to the plate, they can be at a loss.

Conversely, many synagogues in the United States have an excess number of Torahs accumulated either from donations or mergers with other synagogues. Sometimes a synagogue will sell one of its Torahs to get money to cover a budget shortfall. It can advertise it in online marketplaces like Sofer on Site to connect it to a synagogue looking to buy a Torah. Prices for used Torahs range from $9,000 to more than $40,000.

Sofer on Site also has scribes who write new Torahs for purchase. There are 304,805 letters in the Torah and it takes about a year to write one, according to Aaron Zaks, a scribe at Sofer on Site, who said it is “preferable that one scribe writes the Torah from beginning to end. A new Torah today can run from $30,000 to $60,000, depending on how beautiful the writing is and who the scribe is.”

The lighter and finer the parchment, the less it weighs and the more expensive it costs. A 17.75-inch to 19-inch Torah (the standard size) should weigh no more than 10 pounds, according to Sofer on Site. It also encourages synagogues to have their Torahs regularly examined by a scribe because they deteriorate over time and can become hard to read. And the cost of making extensive repairs is substantial.

In addition, it offers appraisals of a Torah at the current market value and stresses the importance of insuring each Torah “with ample coverage against theft, water or fire damage or loss.”

‘It was a real cloak and dagger situation’

A series of Torah thefts in New York in the early 1980s – 200 were stolen in one year alone – prompted the New York City Police Department to suggest to the Jewish Community Relations Council of New York that it register all Torahs to cut down on theft.

“From 1994-95 there were 14 Torah thefts and we announced a Torah registry,” recalled David Pollock, the JCRC’s associate executive director.

At about the same time, a man was caught breaking into hotel rooms. During questioning by police, he confessed to have stolen 14 Torahs and led them to his fence, who agreed to help recover the Torahs for a reduced sentence.

“It was a real cloak and dagger situation,” Pollock recalled. “I had Torahs being dropped off on street corners. I got 10 back. Then we found out that the majority of the stolen Torahs were registered but that none of the ones returned were registered. Someone tried to pull a switcheroo. The fence was rearrested. We finally got back one of the stolen Torahs after long negotiations.” They found the Torah halfway around the world, in Israel.

B’nai Congregation in Boca Raton, Fla., recently commissioned a scribe to write a new Torah to mark the end of the pandemic, the return to the synagogue and to honor and remember those lost to COVID-19. 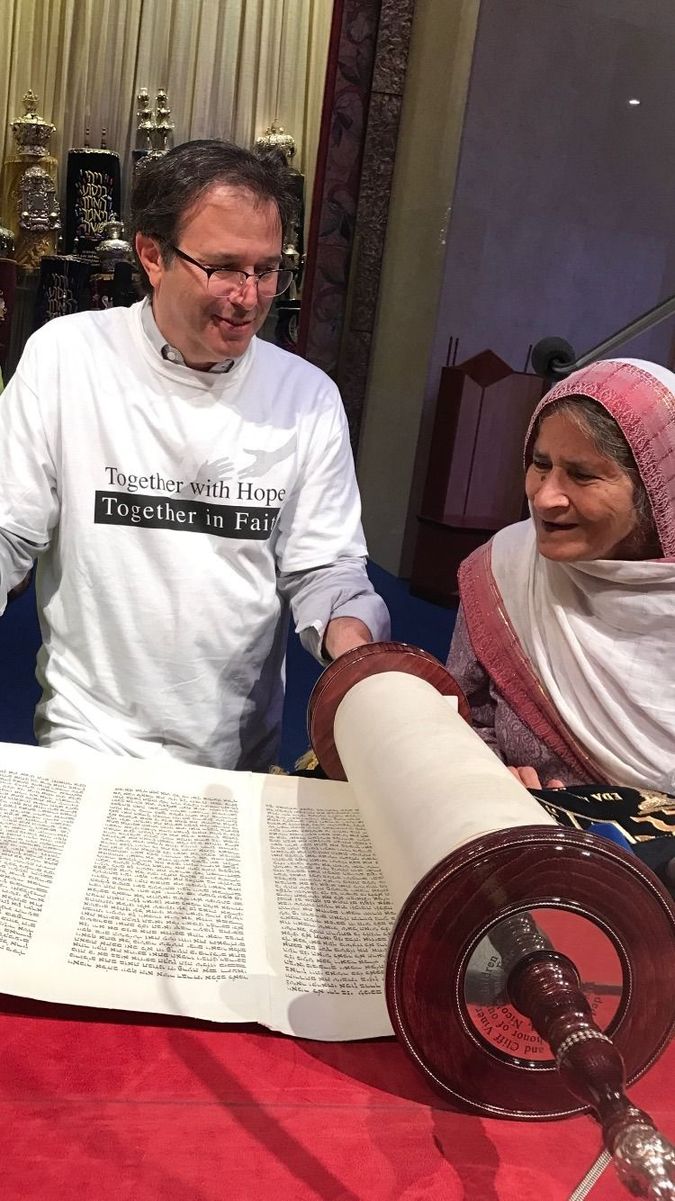 Rabbi David Steinhardt, spiritual leader of B’nai Torah Congregation in Boca Raton, Fla., showing a Torah to a Moslem woman visiting the synagogue from a local mosque in January 2017.

Although the congregation has many Torahs, most are too fragile or heavy to use on a regular basis. David Steinhardt, its senior rabbi, said about a half-dozen are used regularly for the simultaneous services held in different parts of the synagogue. He said the congregation plans to donate one of its infrequently used Torahs to a new synagogue in the Philippines.

He noted that the congregation takes special precautions with the Torahs in the event of hurricane warnings. Each is wrapped in plastic bags that are then put into plastic bins and placed in an inner room that is far from any outside wall.

Steinhardt said that many years ago he developed a greater appreciation for the Torah after a non-Jewish woman saw one for the first time and remarked how “precious” it is to her and that she understands “why the Jewish people have survived. The intention, care and writing of the Torah scroll touches my heart.” And more recently, an elderly Islamic woman looked at the Torah and told him, “I know it is the word of God, and we all share the same God.”

The new Torah is expected to be dedicated between Purim and Passover next year. In the meantime, “we have created a whole structure that involves education not just about the writing of a Torah but special Torah classes, moments of celebration and to give thanks to God for our survival.”

“Our community survived because of Torah and the lessons of Torah,” he added.