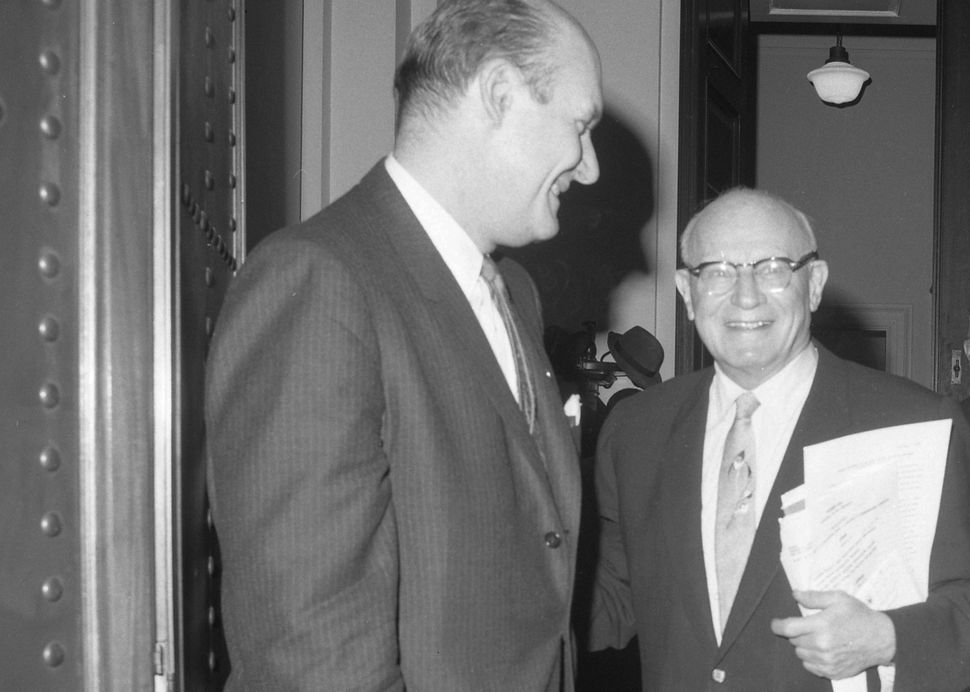 You’re in what has to be a small company of Black scholars who’ve written books about white figures, at least any who’ve done so since the Civil Rights Movement. What led you to Emanuel Celler?

I wrote a biography of my mentor, Andrew Cooper. He started the City Sun in Brooklyn in 1984 and ran it for 12 years. His other claim to fame was he was part of a voting rights lawsuit in 1966. If you looked at the gerrymandered district, you saw these knives carving up Bedford-Stuyvesant five ways. One piece went to a district represented by this person named Emanuel Celler.

I start taking a look at him and one thing that comes out is he’s the person behind the 1965 Voting Rights Act. Then I see he’s also behind Immigration and Naturalization Act of 1965. My family being up Caribbean heritage, we have a special story as far as that is concerned. The other thing that fascinated me was when I was doing some Google searches, I kept pulling up these white nationalists posts with the general theme, “You know Celler, Jacob Javits and Chuck Schumer — they have destroyed American culture. So I thought, “OK, now I’m interested.”

He entered Congress in 1923, just before Congress passed the Johnson-Reed Act, which you write began a whitening of America. It severely restricted immigration from Eastern Europe and virtually cut it off from Asia. He was solidly against it but there wasn’t much he could do at the time.

There was a group of about 10 congressmen from New York, Chicago, places like that, including people like Fiorella LaGuardia. They put up a good fight but they were young and outnumbered.

During Celler’s first 10 years in Congress, he would often wonder what am I doing here? But as the Nazis began overrunning countries in Europe, he found his purpose, saying, “We have to find a way to get these refugees either into America or somewhere else.”

After the war, our rigid immigration law was creating huge headaches for American presidents. Now that the Cold War was on, do we really want those folks to fall into the hands of the Communists? Celler worked with Clare Booth Luce on the bill to recognize India as it was about to go independent. He said you can’t let them fall to the Chinese.

We had these crazy rules, like one under the Chinese Exclusion Act that allowed for maybe a hundred immigrants per year. I learned he had what he called “mortgaging”; to get immigrants into America, he would borrow against their country’s future quota. In 1948, he got the Displaced Persons Act passed.

I want to come back to when he started out. Why do you think he had this proclivity for the underdog? Wasn’t he fairly comfortable?

He was comfortable until his father’s distillery business failed. Then his father died and he became the male head of the household. He gets accepted to Columbia and had to work and take care of the family. An uncle who was well-off offered to support him, saying, “I’m going to pay your way through Columbia but under this condition: You live a life of service.”

He lived in that part of Brooklyn where he saw how everyone else lived all around him — Irish, Italians, Germans, Jews. There had always been Black people there but their numbers were very small then.

He wrote the Civil Rights Acts of 1957 and 1960, which you quote then-NAACP lawyer Thurgood Marshall saying it “isn’t worth the paper it’s written on.”

Yes, but by getting those acts passed, he set up a system to document voter repression, intimidation and violence, particularly in the South. By then, he’s been with the Congress a long time and he knows you don’t get a hundred percent of what you want. Sometimes you get half a loaf, and it’s better than not having anything. But he lays the groundwork with those two acts to set up the big one in 1964, and then the Voting Rights Act.

Many people attribute passage of the Civil Rights as a tribute to Kennedy after the assasination.

The Southern Democrats who held power were still his nemeses. Sen. Rankin of Mississippi really tormented him in the 40s and 50s. He infuriated Rep. Howard Judge Smith of Virginia.

The funniest part for me is when Smith tried to set a trap with the Civil Rights Bill, saying, “Well. if we make Black people first-class citizens, we have to add women.” Celler responded by going into this role of the henpecked husband.

I think you quote him saying that “gender problems are solved in my household because I say, ‘Yes, dear.’”

Some of the women members of Congress did not appreciate that, but you know but in the end —

They added the word “sex,” which Smith had no intention of including in reality. But it passed.

Right. So now it’s not just about race, it’s about sex. It’s about religion. It covers discrimination based on a lot of things. That opened it up and today we have all these titles. So before you know it, there’s a more inclusive Civil Rights Bill.

I have to go back to how unusual it is for a Black scholar to write a biography about a white man — and I say “white man” in quotes with the whole thing about Jews being or not being considered white.

I’m from Brooklyn. Everybody lives near everybody else and we all have to know each other’s culture just to be able to navigate New York City. My middle brother, for instance, is a civil servant. He speaks with that Italian-Irish-Yiddish accent from his generation. Now, that New York accent has evolved to be more Latin and Asian and Caribbean. But that’s how you fit in.

So you wrote about him because you’re a Brooklyn kid and he was a Brooklyn guy made good?