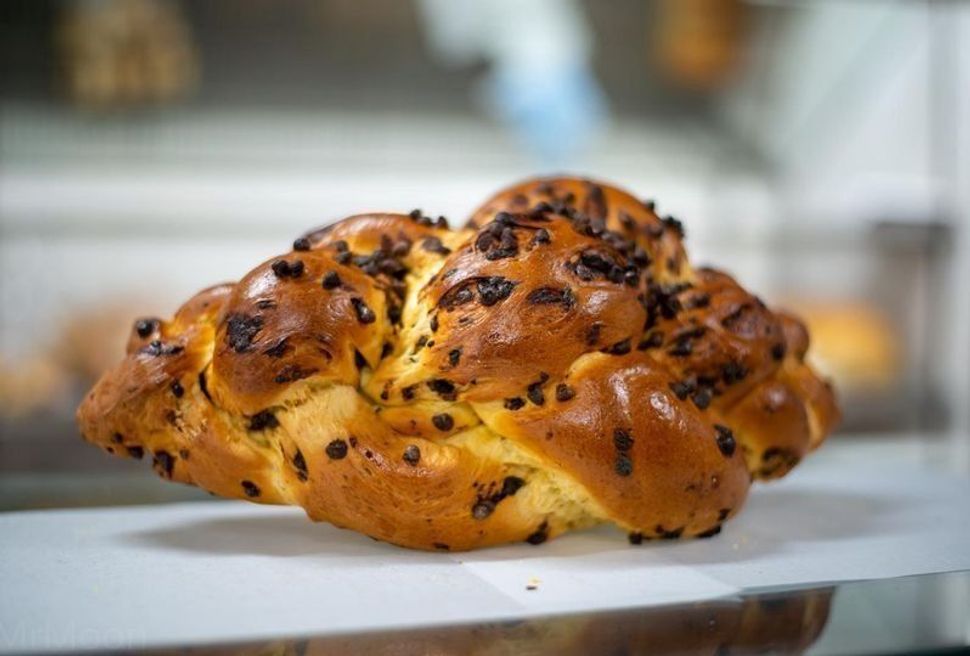 Diamond Bakery is known for their signature sweets, pastries, and challahs that come from recipes nearly a century old. Courtesy of Diamond Bakery

A few months ago, two men drove from Santa Barbara to Los Angeles to satisfy their craving for a good pastrami sandwich. The trip turned out to be life-changing. They bought their sandwiches — and decided to buy a famous Jewish bakery, too.

“We came down to buy a pastrami sandwich and bought the most expensive one ever sold,” said Diamond’s new co-owner Brian Hollander.

Hollander and Doug Weinstein had become friends through cooking meals for seniors and then baking challah during the pandemic through the Jewish Federation of Greater Santa Barbara. Their baking program grew so popular that at last count, they were baking about 200 challahs each week. 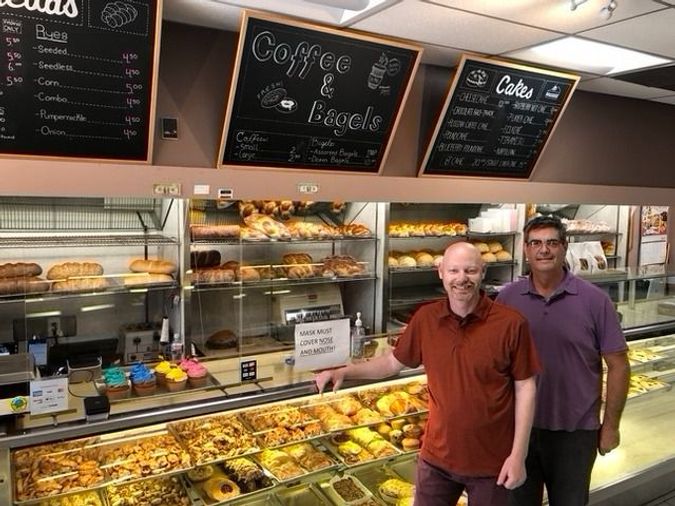 Brian Hollander and Doug Weinstein stand in front of the bakery counter at Diamond Bakery, which they purchased and reopened at the end of June. Courtesy of Brian Hollander

With Canter’s Deli in their sights, the men – who live in Santa Barbara, 90 miles away – decided a short road trip was in order. The other destination on their itinerary might not have the same national name recognition as Canter’s, but for L.A. Jews, Diamond Bakery, on the next block, is no less a culinary landmark. After their sandwich at Canter’s, they stopped at Diamond for some of its famed marbled rye and other goodies.

There, they learned that the 75-year-old kosher bakery was struggling. It had been sold to its head baker, Ramon Luna, shortly before the pandemic started, but the loss of all of its wholesale accounts as well as its foot traffic due to the pandemic was crippling. Despite his and his family’s best efforts, Luna was contemplating closing its doors for good.

Luna and Weinstein had met before, and Luna offered to show them around. What began as them joking about how much more efficient their challah program could be in that amount of space soon turned into something else, and the next thing they knew, they were asking its selling price.

On the drive home, Weinstein and Hollander came up with a business plan. They began brainstorming about what the bakery could be — not just a place to get bread and black-and-whites, but a non-profit that would serve the community.

“By the end of that drive, we knew what we wanted to do,” said Hollander.

Rather than closing its doors in June, instead Diamond held a re-opening on June 28.

It was a pretzel-like twist in a long, historic story. Diamond Bakery was started by Jack and Betty Segal in 1946. In 1969, they sold it to two couples, the Lottmans and the Rubensteins, all of whom survived the Holocaust — some lore says the two couples met at Auschwitz.

The Lottman’s son Mark then ran it, selling it to Luna and other long-serving employees who pooled their money together to buy it.

Much of Diamond’s repertoire is unknown to those who ate it regularly — its breads were sold wholesale to many of Los Angeles’ eateries. 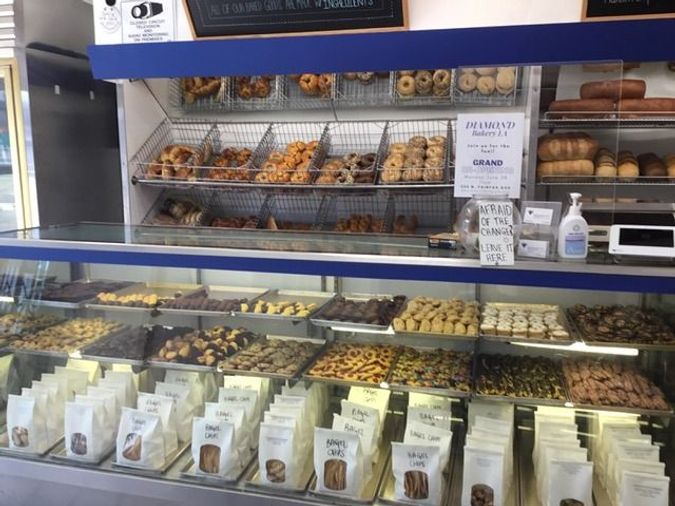 Head baker Ramon Luna will stay on as chief baking officer after owning and operating the bakery during the pandemic. Courtesy of Brian Hollander

But for many native Angelenos, it holds a special place. Mina Yaroslavsky Bressler remembers the rainbow-sprinkled cookies she was handed as a child by one of the hairnetted, elderly women behind the counter, every time she walked in the door. Free cookies were always handed to children, while their parents or grandparents shopped.

“My family would come into L.A. proper to visit Bubbe and relatives and most often we’d eat at Canter’s,” said Bruce Bierman. “But we’d always get my mom’s favorite black-and-white cookies and dad’s favorite rugulach at Diamond.”

“Pretty much everything baked in my home came from Diamond or Canter’s,” said Jami Goldstene, who grew up in the neighborhood.

Now a co-owner of Solomon’s Deli in Sacramento, Goldstene added, “Diamond is a big part of my inspiration for Solomon’s.”

Many former Angelenos had items shipped to them around the country. But as many entrepreneurs have learned the hard way, nostalgia isn’t always enough to carry a business.

“We want to still give our retail customers the feel of a family business, but a wholesale bakery has to be run like a company, and that side hasn’t really existed,” said Hollander. “We need to both focus on the business side, while making sure it feels like it’s still the same place they’ve been coming to for generations.”

Weinstein, who is the bakery’s new chief operating officer as well as director of bakery operations, has over 30 years experience in L.A. restaurants and hotels as a pastry chef. He intends to strike a balance between offering the recipes for classics the bakery is known for, and both increasing and upgrading its pastry offerings.

“My background is in fine pastries, and I want to feature some of that as long as it’s consistent with our theme,” he said.

As catering returns, he plans on offering fine pastries along with the five to 15 pound challahs made for weddings and b’nei mitzvah, and even wedding cakes, as they used to do.

Noting that Diamond already does excellent cannoli and eclairs, he hopes to start offering pastries from other countries where Jews live, he said.

Meanwhile, Hollander is the chief operating officer and director of business operations, as well as the director of the new non-profit arm, L’Dor V’Dough — a play on the Hebrew expression l’dor v’dor, meaning “from generation to generation.” Hollander has spent most of his career as an administrator in the disabled community.

Ramon Luna will stay on as chief baking officer.

“We credit him and his family with having held this together during the pandemic,” said Hollander. “One of the conditions of the deal was that we be able to retain all of the staff that have been working here, because they know the bakery and the recipes and customers.”

Meanwhile, Hollander and Weinstein are busy planning for the future. There are smaller items on the agenda, like switching over to fully sustainable packaging. And then there are the larger items, like serving as a job training ground for those with disabilities and the formerly incarcerated.

Hollander has been thinking about how to use the bakery’s history – as it was owned by Holocaust survivors for much of its existence – to continue the discussion about discrimination today. The protests after the murder of George Floyd started in the Fairfax district, Hollander pointed out.

“We want to talk about how speaking out and standing up for the rights of other people and yourselves is all interconnected, especially the interests of historically marginalized groups,” he said. “We want to bring young people into that conversation and also give them baking experience.”

A mural is planned for one of the bakery’s walls that depicts the bakery and the history of the Fairfax neighborhood interspersed with other significant social justice figures throughout history, said Hollander, who intends to invite neighbors and community members to work on it. 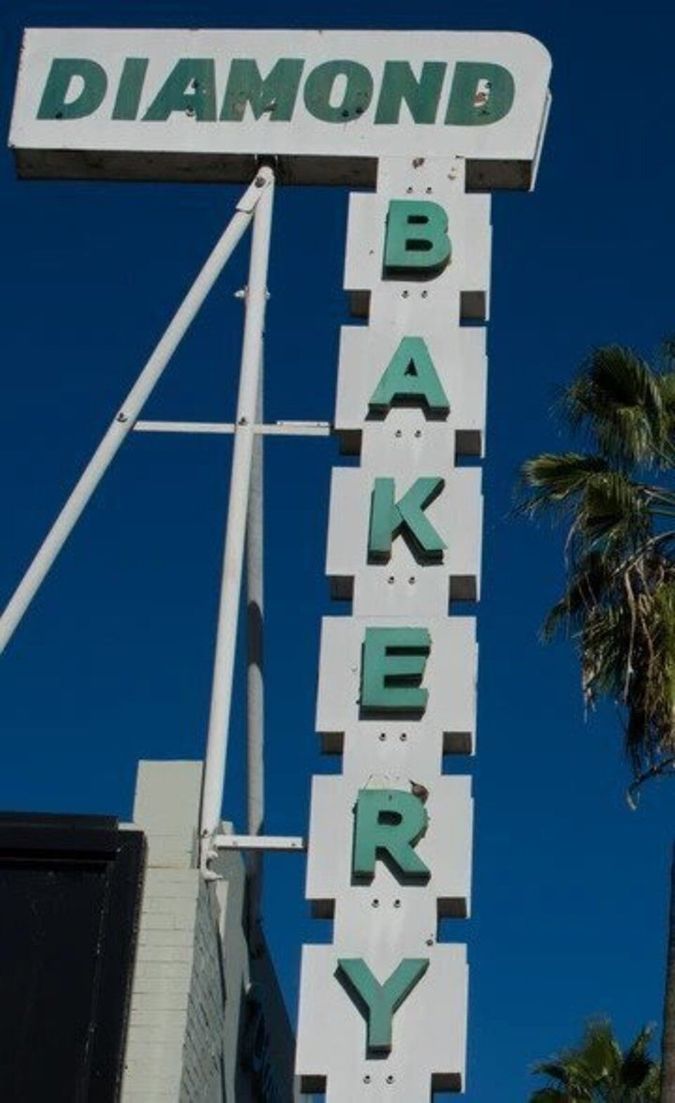 The Jewish bakery is located at 355 N Fairfax Avenue in Los Angeles. Courtesy of Diamond Bakery