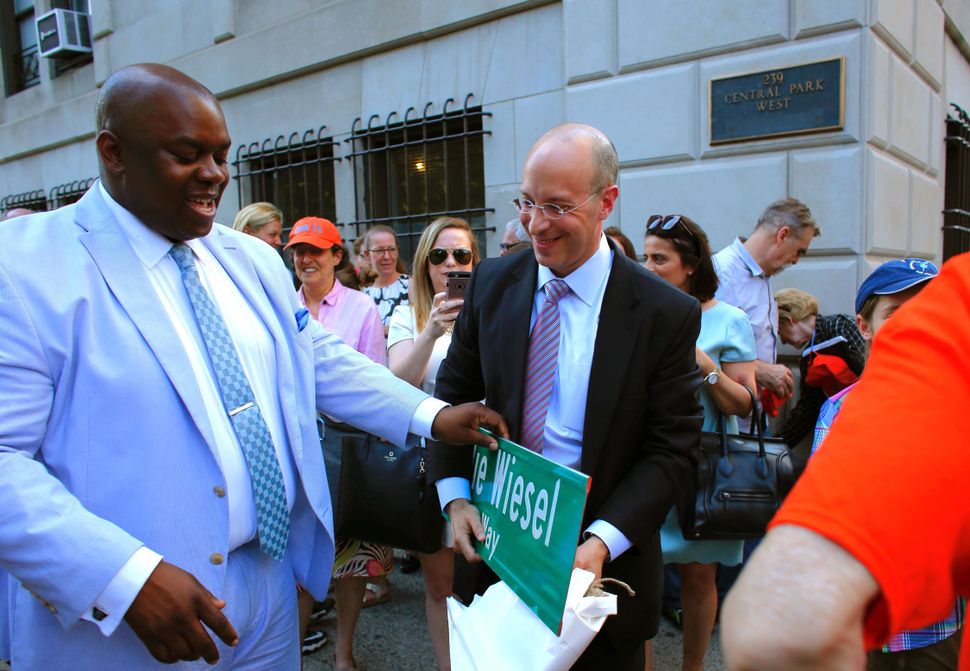 When Paula Bienenfeld applied for permits to hold a rally against antisemitism in Washington three months ago, she had modest aspirations. The local activist had been alarmed by the uptick in antisemitic violence during Israel’s war in Gaza in May and what she felt was a failure by major Jewish organizations to forcefully respond to years of growing animosity toward American Jews.

“I just thought enough is enough,” said Bienenfeld, who teamed up with friends to get the event off the ground. “We just started calling everybody that we knew.”

The cohort quickly assembled a list of mostly right-wing sponsors before an unexpected assist from Elisha Wiesel, son of the late Nobel Laureate Elie, helped turn it from a niche event into what may be the largest such demonstration in the nation’s capital since more than 250,000 people marched on behalf of Soviet Jewry in 1987, or 100,000 rallied for Israel in 2002 during the second Palestinian intifada.

Its transformation has been praised by many as a triumph of diplomacy and Jewish solidarity. But some progressive groups feel alienated by the way the event — called “No Fear: A Rally In Solidarity With The Jewish People” — came together, particularly over disputes related to Israel.

More than 100 Jewish groups that met the organizers’ requirement that they be Zionist have signed up as sponsors, including establishment stalwarts like the American Jewish Committee and the Anti-Defamation League and the three major religious denominations, Orthodox, Conservative and Reform. Buses are bringing attendees from as far away as Boston and the White House plans to send a video message.

“Eighty percent of the value of the rally, honestly, is in the work we’ve done leading up,” Wiesel said in an interview, “defining what I want to put forward as the big tent approach to combating antisemitism.”

The rally will be a show of strength for those concerned by antisemitic incidents that, according to several reports, skyrocketed this spring, and a blow to those on the left who have sought to separate the fight against antisemitism from support for Israel.

Wiesel, a banking executive, said he initially felt compelled to create an event during Israel’s May war with Hamas — “when the bombs were still dropping in Israel” — but was alarmed by the fear among Jewish groups that the community was too divided around Israel to come together for a rally.

“That concerned me,” Wiesel said, “that we could let ourselves get to this place where Israel has become a political wedge for us.”

He took a neder, Hebrew for oath, to support the next Jewish solidarity event in Washington and by June 7 was emailing Bienenfeld to lend assistance. Wiesel set out to expand the roster of sponsors from conservative Israel advocacy groups assembled like StandWithUs and the Zionist Organization of America. Those organizations had been recruited by Melissa Landa, director of the tiny Alliance for Israel, who spearheaded early rally plans and took a firm line on making support for Israel a key part of the event.

“I see a lot of the antisemitism in the United States being articulated as anti-Zionism,” Landa said in an interview. “To me, it’s for the most part one in the same.”

Wiesel succeeded in broadening the tent. He convinced the American Jewish Committee to sign on, followed quickly by the Anti-Defamation League. By the first week of July, the Reform, Conservative and Orthodox movements had signed on as well, adding broad legitimacy to what had been a niche affair.

The leading groups representing Republicans Jews and Democratic Jews came aboard too.

Hadar Susskind, head of Americans for Peace Now, a liberal Zionist group, described “this domino [effect] of groups being afraid to be seen as not fighting antisemitism as much as the next guy.”

The delicate matter of Israel

But not everyone wanted in.

Susskind declined to join in over uncertainty about the event’s programming and its origins on the right.

“We’ve seen a push that started with the far-right but has encompassed a large, large breadth of the community to very intentionally conflate anti-Zionism with antisemitism,” Susskind said. “It’s quite likely that you’re going to see a lot of that there.”

And Dove Kent, U.S. director of strategy for the Jerusalem Declaration on Antisemitism project, which seeks to makes room for even harsh criticism of Israel, said some of the rally’s organizers, “are taking this moment of increased fear about Jewish safety — here and in Israel and everywhere — to stake out a claim that only Jewish Zionist voices can speak about Jewish safety.”

While the coalition has expanded far beyond organizations focused primarily on Israel, Wiesel acknowledged that he doesn’t view fighting antisemitism as distinct from supporting the Jewish state, which is home to roughly half the world’s Jewish population.

“It’s a rally against antisemitism, there’s no question,” he said. “And to me, antisemitism encompasses the thought that half of our brothers and sisters get to live in peace and security in our homeland.”

What that means for the event itself is unclear but a June invitation sent to Jewish organizations was blunt. “Haters and one-staters are not welcome – if you’re calling for the forced expulsion of Arabs, or the end of Israel as a Jewish and Zionist state, then stay away,” the invitation read. “But aside from that, our tent is big.” 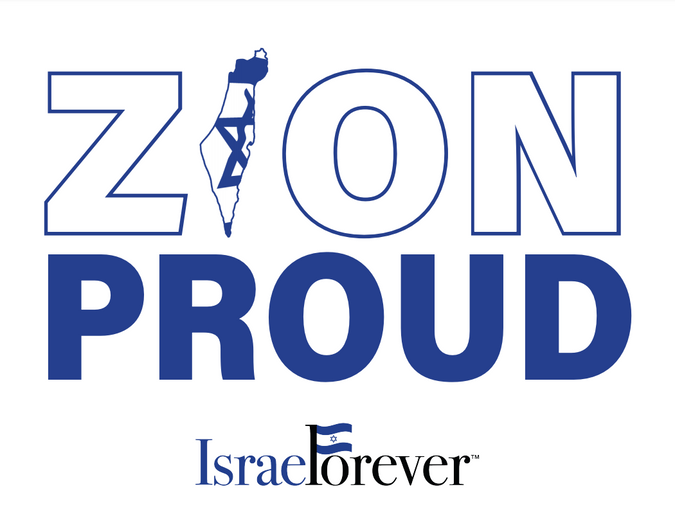 The Israel Forever Foundation, one of the rally’s main sponsors, initially encouraged attendees to download a poster that read “Zion Proud” and featured a map made out of the Israeli flag that combined Israel, the West Bank and Gaza into a single territory. The foundation removed that version this week at the behest of organizers.

Steve Rabinowitz, a political strategist hired to promote the rally, said there was disagreement among those involved over the event’s focus.

“For my money it’s an antisemitism rally,” Rabinowitz said. “I know there are a lot of people who would like it to be an Israel rally.”

J Street on the margins

One of the groups most notably absent from the rally will be J Street, the prominent, liberal pro-Israel group.

Some of the early promotional material for the event declared that all Zionist Jews were welcome “from J Street on the left, ZOA on the right, and everyone in between.” But the J Street reference quickly disappeared.

Mort Klein, ZOA’s president and a longtime J Street foe, took credit for its removal but Wiesel said “that is definitely not what happened.” Wiesel declined to elaborate, citing the issue’s sensitivity, and J Street spokesman Misha Linneham declined to say why the group was not participating in the rally or whether it had asked organizers to stop using its name.

The dispute comes months after J Street was blocked from joining the American Zionist Movement, an umbrella organization. But where that debate divided Zionist organizations along political lines, Sunday’s rally has mostly managed to transcend such differences. Sarrae Crane, director of the Conservative movement’s Zionist arm, praised Wiesel for convincing all the major players to participate.

“He understood that antisemitism is a threat to all of us,” said Crane. “He is single-handedly responsible for moving this rally from a right-wing gathering to a community event.”

Wiesel’s own ambiguous politics may have helped him.

He spoke out against President Donald Trump’s ban on travel from Muslim-majority countries, and donated to both Hillary Clinton and Joe Biden’s presidential campaigns, according to the Federal Election Commission. Wiesel has also donated thousands of dollars to Republicans, although the bulk of his contributions — more than $50,000 — have gone to the political action committee of Goldman Sachs, where he was a longtime executive.

An effort to move the rally leftward

Rabbi Rick Jacobs, president of the Union for Reform Judaism, said that rather than adding a stamp of approval to a right-wing gathering, the participation of progressive organizations like his own will help moderate its content.

“It’s not that we’re being co-opted by some smaller groups,” Jacobs said. “We’ve helped redefine the event.”

Jacobs pointed to the speakers list, which includes a liberal voices like Rabbis Menachem Creditor and David Saperstein, alongside a conservative figures such as Meghan McCain and Hussein Aboubakr. Those at the rally will also hear from victims of antisemitism, including Rabbi Sholmo Noginski, who was stabbed in Boston last week.

Left-leaning voices from the political realm will also take the stage at the rally, including Ron Klein, a former congressman and chairman of the Jewish Democratic Council of America. And the White House Thursday expressed its commitment to the cause: “President Biden has made clear that the rise of attacks on the Jewish community are despicable and they must stop,” a spokesperson said in a statement to the Forward.

Organizers made other concessions to the late liberal additions to the sponsor list, including adding a “statement of inclusion” to the rally’s website at the request of the Anti-Defamation League. The declaration initially said the coalition “will not tolerate expressions of racism, Islamophobia, misogyny, classism, ableism, homophobia, transphobia, xenophobia or any other hate.”

That language in turn rankled some of the original, conservative sponsors.

“This is a rally about Jew hatred,” Mort Klein, the ZOA head, said in an interview. “It’s not that we’re not appalled by every hatred — of course we are — but this really waters down the theme.”

The references to specific forms of bigotry was removed Thursday, leaving a more generic line opposing “all hatred.” Rally spokesman Nathan Miller said the deletion was inadvertent and due to the challenge of managing a web page that was being constantly updated. The full statement was restored Friday morning.

The 11th hour changes underscored the difficulty of holding together a massive coalition that remained fragile just days before thousands of Jews are expected to arrive outside the U.S. Capitol.

Security, the organizers promise, will be high.