LIVE UPDATES: Jews and allies gather at the Capitol to rally against antisemitism 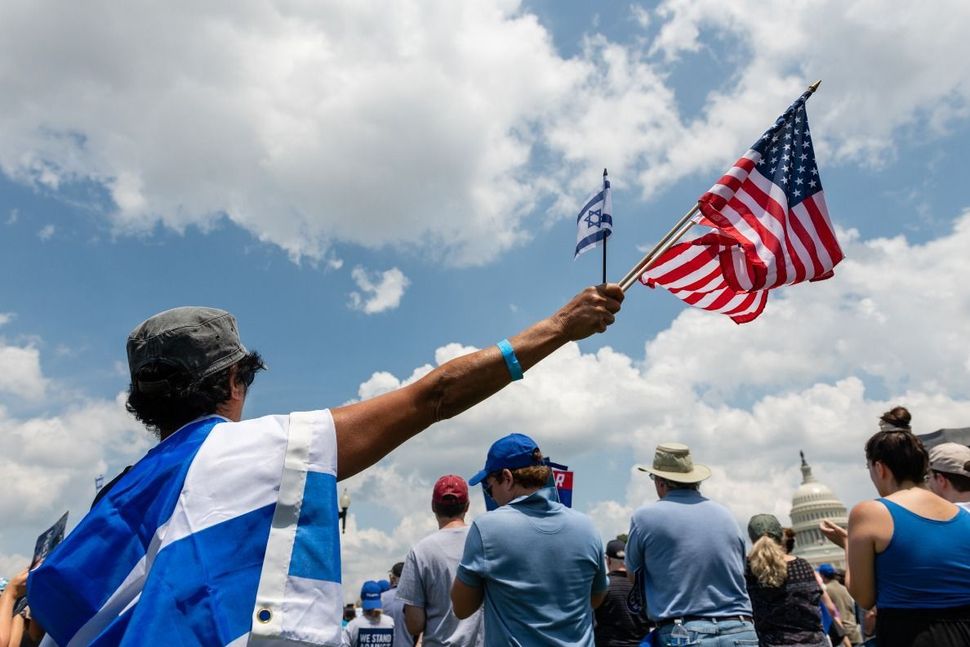 A person waves American and Israeli flags at “No Fear: A Rally in Solitary with the Jewish People,” near the U.S. Capitol in Washington, D.C. on July 11, 2021. By Eric Lee 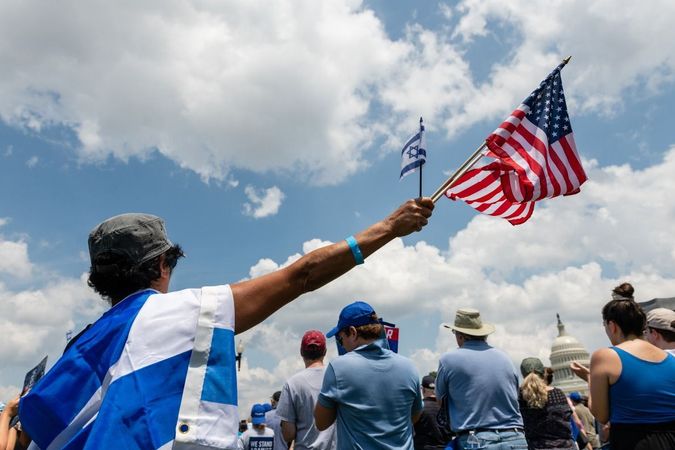 A person waves American and Israeli flags at “No Fear: A Rally in Solitary with the Jewish People,” near the U.S. Capitol in Washington, D.C. on July 11, 2021. By Eric Lee

Jews and allies from across the East Coast and beyond demonstrated Sunday afternoon in Washington against rising antisemitism and hostility toward Israel. The gathering was sponsored by the entire Jewish establishment even as a handful of influential progressive organizations declined to participate amid concerns over how the event will approach Israel.

Attendees were brought to the rally site outside the U.S. Capitol by free buses from as far away as Boston to hear from victims of antisemitism, clergy and both Democratic and Republican political leaders.

“No Fear: A Rally In Solidarity with the Jewish People” may mark the first time American Jews protested in the nation’s capital against domestic antisemitism, though the crowd — at about 2,000 — did not approach the size of those seen in 2002 when an estimated 100,000 people attended a solidarity rally in support of Israel, or the 250,000 who marched on behalf of Soviet Jews in 1987.

3:10 p.m. Rally wraps up with a cappella group of alumni and students from the University of Maryland singing in English and Hebrew.

3:01 p.m. “Never again is now,” said Yzabella Hazan, whose grandparents fled antisemitism in the Middle East. She said last month someone tried to rip her Star of David necklace from her neck.

2:48 p.m. “Clubhouse Rabbi” Shlomo Litvin of Chabad of the Bluegrass says more assimilation will not protect Jews. “The response to those who want to harm Jews is to embrace Judaism,” he said.

2:30 p.m. Marie Fischer, chair of the Maryland Republican Jewish Council implores the crowd to “work together as one people.” She said Reps. Ilhan Omar, Rashida Tlaib and Marjorie Taylor Greene need to be removed from Congress.

2:20 p.m. “The fight against antisemitism bridges the political divide,” said former Sen. Norm Coleman, Republican of Minnesota, who took the podium with former Democratic Rep. Ron Klein, who chairs of the Jewish Democratic Council of America.

1:50 p.m. Rabbi Jeffrey Myers of the Tree of Life synagogue in Pittsburgh, where Jews were gunned down during Shabbat services in 2018 said, “Eleven Jews died for the crime of being Jewish in America.”

1:45 p.m. Matthew Haverim recounted the violent attack on him, family and friends as they dined outside a Los Angeles restaurant in May. The assailants asked them whether they were Jewish. “If you ask me if I’m Jewish, my answer will always be yes,” said Haverim, whose parents fled Iran to escape antisemitism.

1:35 p.m. “Don’t concede an inch of your humanity,” said Joshua Washington, Director of the Institute for Black Solidarity with Israel. “You have non Jewish allies here who stand with you unequivocally.”

1:15 p.m. “I’m Meghan McCain and I’m a Zionist,” said the conservative pundit and daughter of deceased Sen. John McCain. Calling anti-Zionism antisemitism, she said one of the last conversations she had with her father was about Israel. She said he told her to keep the flame for the country because “there’s no guarantee it’s going to keep burning.” 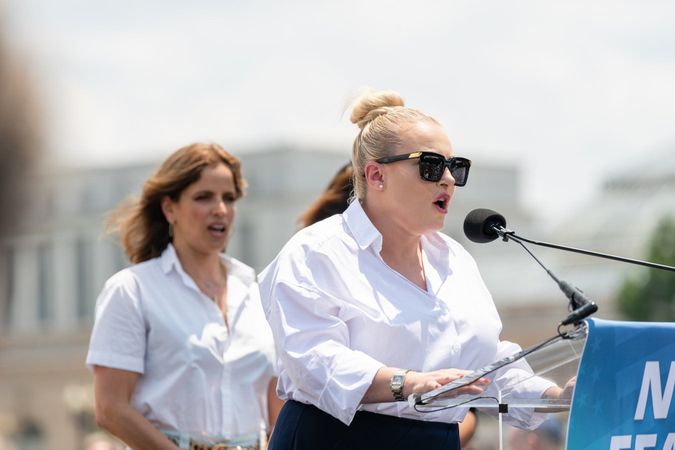 Meghan McCain speaks at “No Fear: A Rally in Solitary with the Jewish People,” near the U.S. Capitol in Washington, D.C. on July 11, 2021.

1:10 p.m. Israeli actress Noa Tishbi tells the crowd that antisemitism is now often masked as anti-Zionism. She condemned the “modern day libel of blaming Israel as a genocidal state.”

12:51 p.m. A vehicle flying a giant flag that emblazoned with “Trump Won” just drove by the rally.

12:45 p.m. Hundreds of people are gathered near the Capitol Reflecting pool, wearing hats emblazoned with #NoFear and holding signs that read “Stand Up to Hate” and “I promise to love being Jewish more than anyone hates me for it.” The crowd took cover in the shade as temperatures reached nearly 90 degrees on a muggy Washington afternoon.

Marsha Klein, a retired special education teacher from New York City, took a free bus to the rally, prompted by her mounting frustration with what she felt was a lack of outrage over antisemitism in the United States compared with bigotry targeting Blacks and Asians. “There was no way I wasn’t coming out,” said Klein, 61, who lives in Queens. “Jewish lives matter too.”

12:30 p.m. Beatboxing friends from the University of Maryland did a sound check to prepare for their performance. “Be brave, be strong,” sang the group, who came together yesterday and did not yet have an official name. “Stand up as one.”

12:20 p.m. Elisha Wiesel, the son of Nobel Laureate author Elie Wiesel, who helped bring together the dozens of Jewish groups co-sponsoring the rally, tells the Forward: “We’re trying to achieve this temporary moment of unity.” He said that he hopes the detente between conservative and liberal Jewish groups — albeit all Zionist organizations — lasts well beyond Sunday. “Many people care very deeply about this topic but were just fearful,” Wiesel said, describing concerns he heard from Jewish leaders as he recruited them to sponsor the event: that a speaker would say something that offensive, or that another sponsoring organization would turn out to be unacceptable to their membership. “There are a lot of divisive grounds in our community,” he said.

12:15 p.m. About 200 people have already arrived at the rally and organizers say they are now expecting between 2,000 and 4,000. A stage is set up on the west side of the Capitol so speakers will have the building as a backdrop.

9:20 a.m. Passing Jersey City: On a touring bus that took off from New York’s Upper East Side with 35 people, Rabbi Chayim Boruch Alevsky — a friend of rally organizer Elisha Weisel — took the microphone at the front of the bus and offered a traveling prayer in Hebrew. “In English, Rabbi!” a woman shouts. He translates, and then makes his way down the aisle taking selfies with the other passengers and offering the men tefillin.

Sunday’s event came together on short notice, with key Jewish organizations signing on less than 10 days ago after the rally evolved from a niche affair sponsored by a small number of right-wing Jewish groups to one sponsored by a wider spectrum of organizations, including the American Jewish Committee, Anti-Defamation League, all three major Jewish denominations and dozens of others from local synagogues to pro-Israel groups.

The organizers, led by Elisha Wiesel, son of the late Nobel Laureate author Elie Wiesel, announced a lengthy roster of speakers ranging from conservative pundit Meghan McCain to Rabbi David Saperstein, a Reform leader who was appointed as ambassador for international religious freedom under President Barack Obama. Leaders of both the Republican Jewish Coalition and the Jewish Democratic Council of America will also speak.

At a time when Jewish groups disagree on the definition of antisemitism, and specifically whether harsh criticism of Israel should considered an attack on Jews, the rally organizers allowed only Zionist sponsors of the event. The liberal pro-Israel organization J Street declined to be a sponsor or to comment on its decision. And Bend the Arc, the largest grassroots progressive Jewish advocacy group in the nation, which does not involve itself in matters related to Israel, was also absent.

Among the victims of antisemitism who addressed the crowd were Rabbi Shlomo Noginski and Matthew Haverim, both of whom were violently attacked in public, as well as Talia and Daniel Rabb, siblings who organized a pro-Israel march near Chicago that was targeted by counterprotesters.

The Anti-Defamation League reported a surge in antisemitic incidents during Israel’s May conflict with Hamas, as well as a rise in the number of Jews in the U.S. who reported encountering antisemitism following the violence, although critics argued the ADL was mixing criticism of Israel with actual discrimination against Jews.

The “No Fear” rally was the first major event held outside the Capitol since the fences and security barriers erected following the January 6 riot were removed Saturday.

LIVE UPDATES: Jews and allies gather at the Capitol to rally against antisemitism