Amid calls for Jewish unity, rally against antisemitism centers Israel 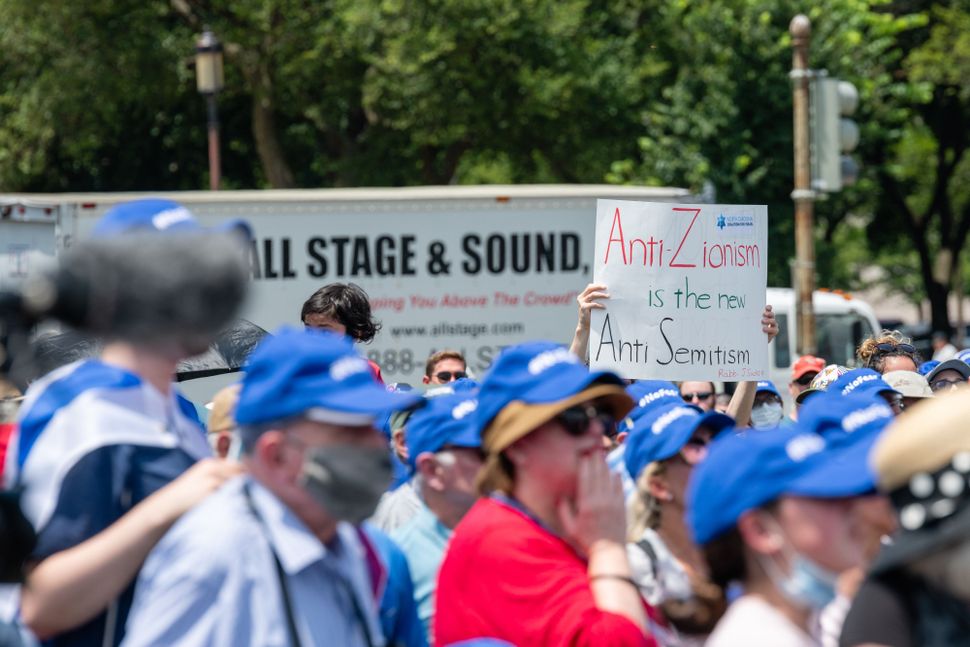 It was the likely first major protest against domestic antisemitism held in the nation’s capital in American history, but to many it bore more resemblance to a pro-Israel rally.

“No Fear: A Rally In Solidarity with the Jewish People” brought more than 2,000 to the Capitol Sunday, when the temperature approached 90 degrees. Relatively few liberal and progressive Jews stood among them, though organizers billed the event as one to unify Jews from across the political and religious spectrum — as long as they were not anti-Zionist.

“Zionism,” Israeli actress Noa Tishby told the crowd, is “about the Jews, their right to live free of persecution after millennia of persecution.” 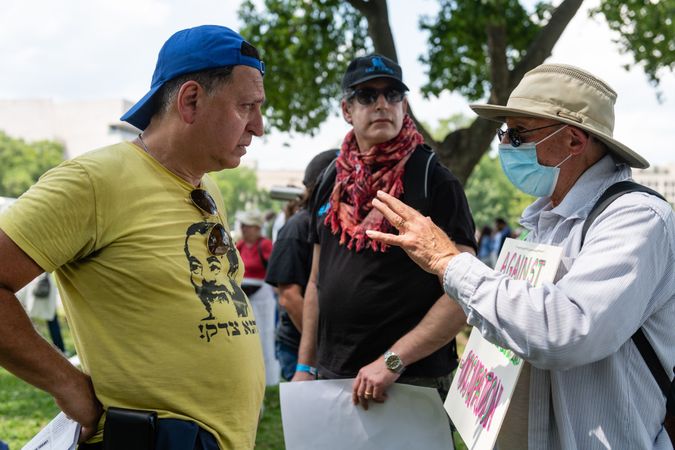 Bruce Kutnick of Kensington, Md., argues with a man wearing a shirt featuring the deceased right-wing extremist Meir Kahane. Kutnick and his wife Malka brought homemade signs to the rally decrying both antisemitism and the Israeli occupation of the West Bank and Gaza. Photo by Eric Lee for the Forward

Far more common were Israeli flags large and small and posters that declared support for Zionism. And many speakers sought to link antisemitism with criticism of Israel. Bruce Kutnick noticed how few liberal organizations had shown up.

“I was quite upset that there were a number of groups who chose not to participate,” he said. “We have to stand together.”

Malka said they hadn’t received many compliments on their matching signs but that the only harassment had come from a couple of “Kahanists,” followers of the deceased, far-right Jewish extremist Meir Kahane who were asked by the event’s leaders to stay away. As the couple was being interviewed by the Forward, explaining how the Kahanists had yelled at them, a man wearing a yellow shirt with Kahane’s face on it interjected — “I wasn’t yelling at you! I was trying to have a conversation!”

As Bruce began arguing with the man, Malka rolled her eyes.

“He wasn’t invited as far as I’m concerned,” she said. 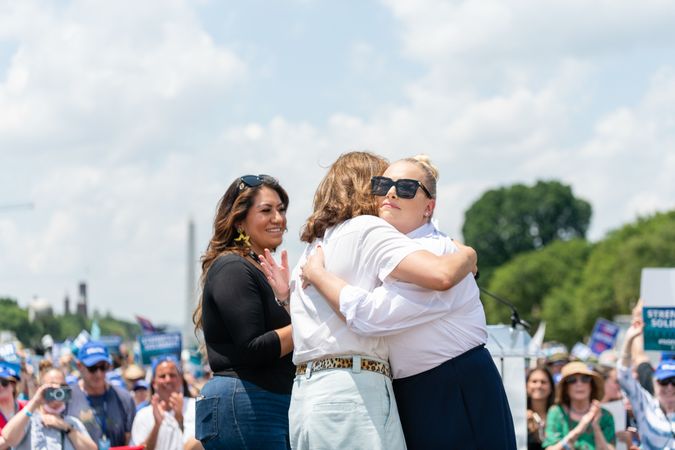 Conservative pundit Meghan McCain embraces model and author Noa Tishby on stage at the “No Fear” rally against antisemitism on Sunday, July 11 in Washington, D.C. as Arizona State Rep. Alma Hernandez, a Democrat, looks on. Photo by Eric Lee for the Forward

The exchange underscored the difficult diplomacy that led up to the rally, which was sponsored by almost the entire Jewish establishment. Most American Jews, according to the Pew Research Center, are liberal and vote for Democrats.

But the idea for the rally had started in right-leaning circles, which expanded to welcome more moderate groups, including the ADL and the three largest Jewish movements — Orthodox, Conservative and Reform.

Organizers handed out blue and white baseball hats emblazoned with “#NoFear” and the event’s official promotional material and posters did not emphasize the Jewish state. But many in the crowd wore Israeli flags and shirts promoting the Israeli military.

Several victims of antisemitic violence spoke, including Rabbi Shlomo Noginski, who was stabbed by an assailant in Boston last week outside a Jewish day school.

“The real target of this killer were the children,” Noginski said in a speech translated by his brother. “Thank God I was standing there to ruin his plan to murder Jewish kids on American soil.” 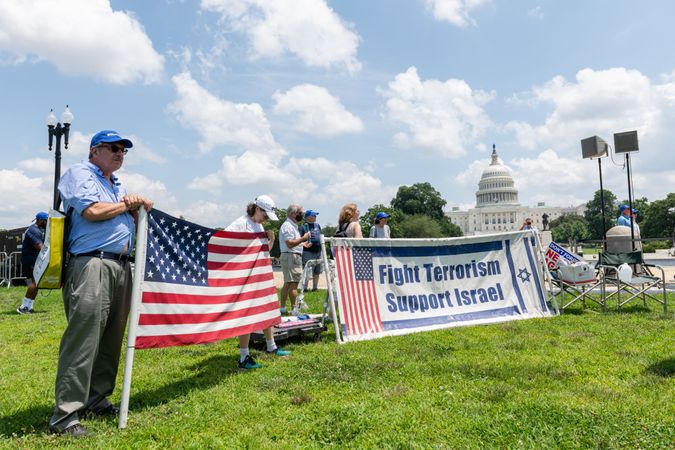 Bob Kunst, not pictured, traveled to Sunday’s “No Fear” rally against antisemitism from Miami Beach with a banner supporting Israel. Organizers asked him to move it away from the stage before the event began. Photo by Eric Lee for the Forward

Others sought to bridge the gap between unambiguous cases of antisemitism and attacks on Jews who support Israel. Talia Raab, a high school student outside Chicago, described receiving antisemitic rape and death threats for organizing a pro-Israel rally during the May violence between Israel and Hamas, and said counterprotestors violently accosted her at the event itself.

Many speeches built on that theme, emphasizing American Jewish support for Israel.

“We show Israel that we are with them!” Raab’s brother Daniel told the crowd. “We go to war with them!”

A solitary counterprotester carried a sign that declared “Free Palestine” until it was ripped by a man wearing an American Zionist Movement t-shirt. The protester declined to provide his name but said he saw the rally as focused on Israel rather than antisemitism.

“One of the greatest PR campaigns of all time was the conflation of anti-Zionism with antisemitism,” he said. It was a similar concern that kept away Americans for Peace Now, whose director Hadar Susskind said last week that he was concerned about the rally’s origins among a small clutch of right-wing groups.

Other leading liberal Jewish organizations including J Street, Bend the Arc and T’ruah also did not participate although their leadership did not specify a reason. 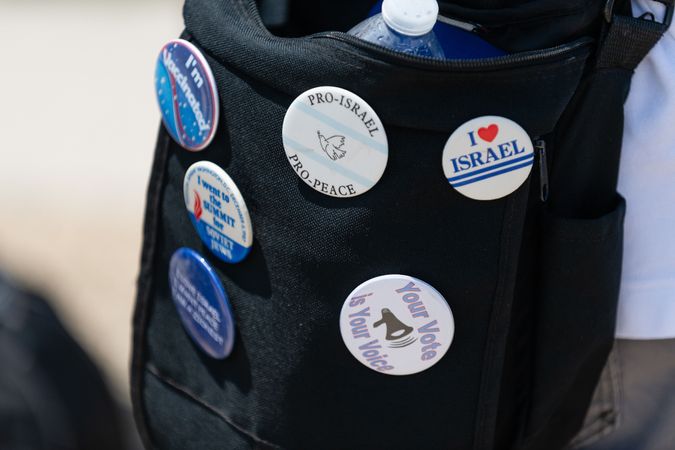 A knapsack at the “No Fear” rally against antisemitism Sunday, June 11 in Washington, D.C. features a pin reading, “Pro-Israel, Pro-Peace.” Photo by Eric Lee for the Forward

The most prominent liberal speaker was Rabbi David Saperstein, a longtime Reform leader who served as ambassador for international religious freedom under President Barack Obama. Saperstein received lukewarm applause as he tried to connect the fight against antisemitism to that against all forms of racial discrimination and bigotry. He did somewhat better when he pointed to the rally’s principle of unity.

“Jews who vote Republican, Democratic or independent,” Saperstein said, “supporters of West Bank settlements and critics of the occupation as I am, we stand united against antisemitism.”

The White House’s representative Erika Moritsugu, deputy assistant to the president, touted the Biden administration’s policies to combat hate crimes and increase antisemitism education and received a polite response from the crowd, except for a handful of hecklers who shouted at the stage: “Biden is evil” and “this administration is more antisemitic than anything.” 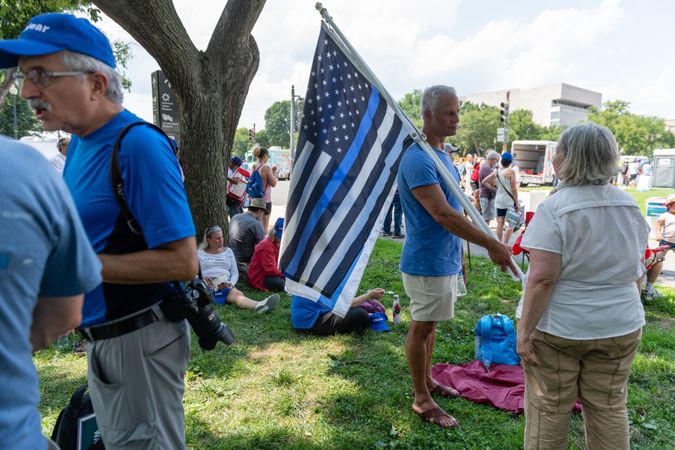 Chen Liebstein of Bethesda, Md., brought an Israeli flag and a “thin blue line” flag to the “No Fear” rally against antisemitism in Washington, D.C. Sunday, July 11. Photo by Eric Lee for the Forward

Chen Liebstein of Bethesda, Md., brought an Israeli flag and “thin blue line” flag — a banner meant to support police that has become a right-wing totem — to the event and carried it behind the stage while Moritsugu was speaking.

Liebstein said he hoped the event would be a wake up call for his more liberal co-religionists. He said he wanted, “left-wing Jews to stand up against their own party.”

A steady stream of rally-goers approach Liebstein and his wife to take photographs with the two flags.

On such a sweltering afternoon many in the crowd took shelter under trees far away from the stage where they sat in lawn chairs or on picnic blankets and chatted with friends.

Taking it all in was an intergenerational group that included people like Marsha Klein, a retired special education teacher from New York City, and Liz Heydorn, a college student in Tennessee who brought a denim jacket that her grandmother had embroidered with a message for the event: “Punch Nazis.”

Jordyn Tilchen, 28, who advocates for Israel on social media and drove from New York to attend the rally, echoed the sentiments of many in the crowd who said that what they viewed as unfair attacks on Israel in recent months had made them more aware of animosity toward Jews.

“A lot of American Jews around my age started to understand how tensions in the Middle East could make them feel unsafe here,” she said. “The last several months felt unbearable.”

Amid calls for Jewish unity, rally against antisemitism centers Israel