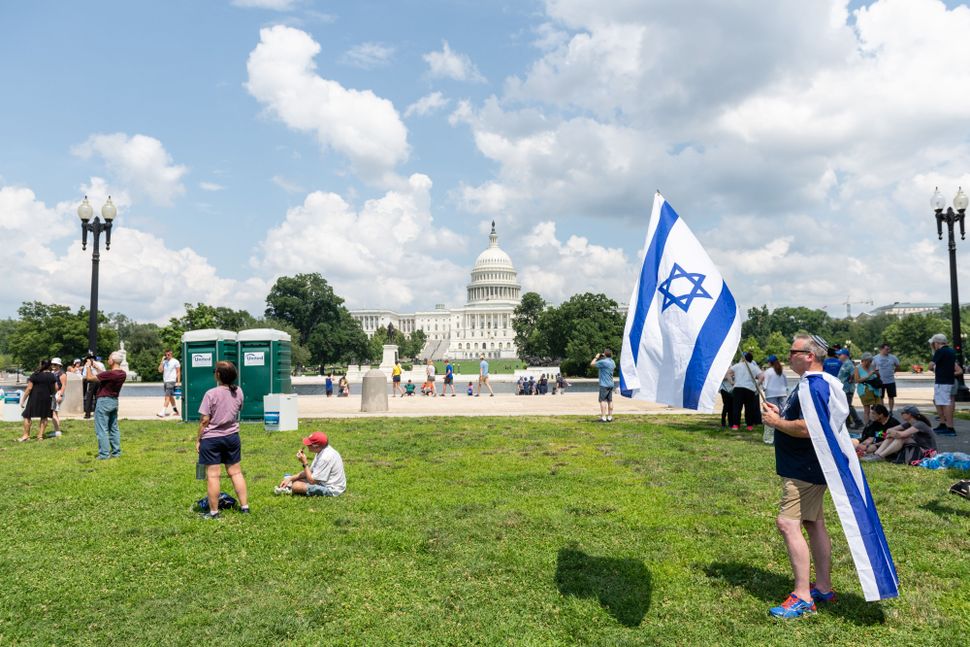 Sunday’s rally against antisemitism drew over 2,000 to Washington, D.C. Photo by Eric Lee for the Forward

Shoshana Baum was on the fence about coming to Washington to rally against antisemitism, given the 10 hour round-trip from Manhattan. When she mentioned the event at a friend’s housewarming party Saturday and was met with an off-color joke that turned into an argument about criticizing Israel, she decided to attend the event, which drew more than 2,000 to the Capitol on a sweltering, humid afternoon.

But before she braved the heat, Baum sat among about 35 others on an air-conditioned bus from New York’s Upper East Side to “No Fear: A Rally In Solidarity with the Jewish People,” as organizers called the event. It was one of several free buses that rally organizers chartered from Boston, Philadelphia and elsewhere. About half-full, passengers of all ages and Jewish backgrounds dotted the rows of seats. A woman forgot a sweater and used an Israeli flag as a blanket. One row chatted in Hebrew, and another shared snacks.

They said they chose to come to the rally in response to a spike in antisemitic hate crimes and what they fear is a normalization of antisemitic rhetoric. Some had marched in the 2002 rally for Israel at the Capitol and felt they had to once again stand up for Jews. Others wanted to see a massive showing of Jewish unity, despite the growing rift between conservative and liberal Jews.

She said she is wary of history repeating itself in the United States, and noted how often Jews have been allowed to live in countries before they are exiled or worse. “It almost feels like that time is coming,” she said. 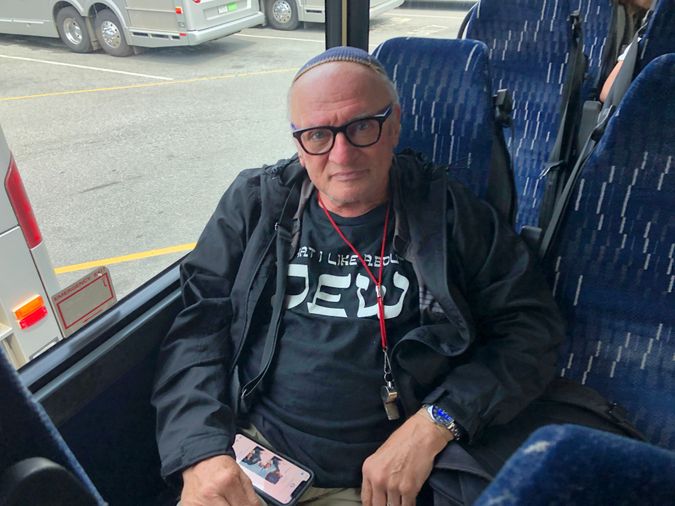 Isaac Geld rode on the Manhattan bus, after the one from the Bronx was cancelled. Photo by Rebecca Salzhauer

Isaac Geld, a child of Holocaust survivors who came to the U.S. when he was four and a half, expressed a similar concern. When it comes to antisemitism, “as a child of survivors, there’s that antenna that goes up,” he said. “Things have become a lot more obvious at this point. You have to be blind not to see it.”

Geld, who joined the bus from Manhattan after the one he planned to take from the Bronx was cancelled due to low turnout, worried that the bus was only half-full. “The only thing worse than not having a rally is having one that’s poorly attended,” he said.

The idea for the rally began in right-leaning circles but came to include more mainstream groups — the ADL, the American Jewish Committee, and the three largest Jewish movements were all sponsors. Organizers took pains to bill the event as a unifying one.

But on the bus, Je’Jae Daniels, an artist from Staten Island who uses the “they” pronoun, expressed discomfort with the rally organizers’ calls for unity, particularly given some of the sponsors’ hostility toward left-leaning Jewish groups, they said.

“You’re clumping a huge group of people together. We say this is one big tribe, but we’re not,” said Daniels, who came with their Israeli-Yemeni mother. “We need to find other ways to build a coalition other than our shared pain.” 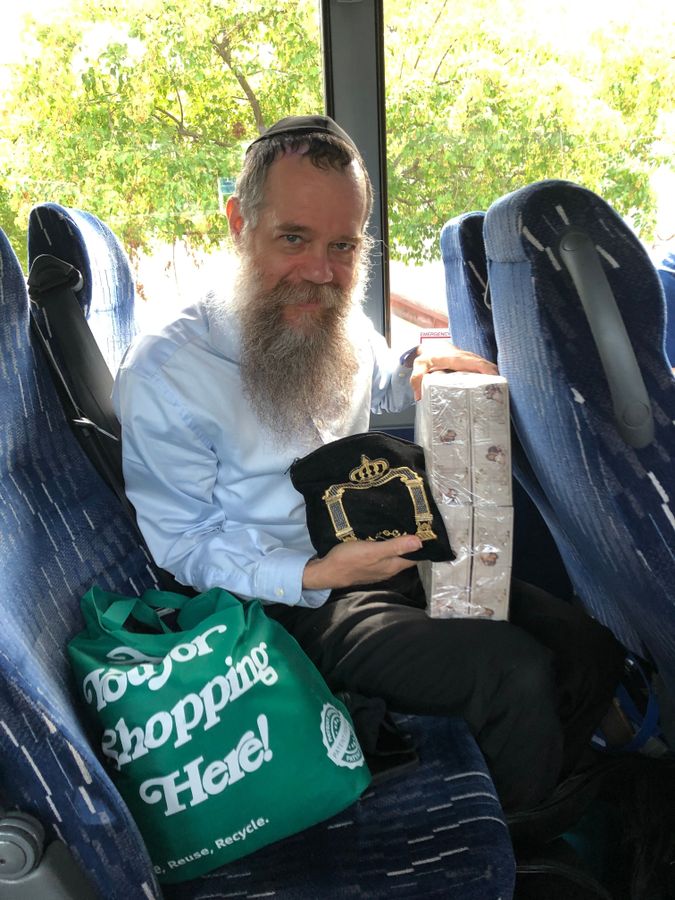 As the bus passed Jersey City, Rabbi Chayim Boruch Alevsky made his way to the front. With the microphone in one hand and his smart phone in the other, Alevsky read a traveler’s prayer in Hebrew. “In English, rabbi!” a woman shouted. He translated and then returned to his seat.

Alevsky, a rabbi at the Chabad of the West Side of Manhattan, traveled with a pair of tefillin that had belonged to Elie Wiesel, the writer and activist, and 250 sets of miniature Shabbat candles. Rally organizer Elisha Wiesel — Elie Wiesel’s son — asked Alevsky, a friend of the family, to “provide an extra mitzvah opportunity for the thousands of individuals who will be congregating for this event,” Alevsky said.

Once in Washington, on the west side of the Capitol, Alevsky and other volunteers organized tefillin stations where rallygoers gathered. They followed Lubavitcher Rebbe Menachem Mendel Schneerson’s tradition of wrapping Israeli soldiers in tefillin for spiritual protection during the Six Day War, he said. 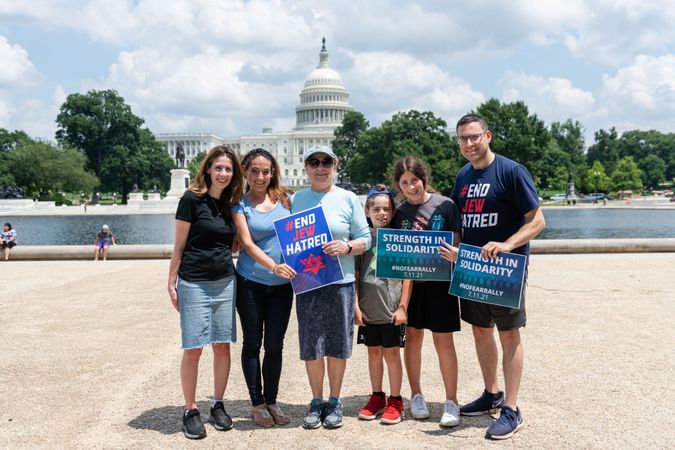 Shoshana Baum met her mother, brother and his family at the rally. Photo by Eric Lee for the Forward

At the rally, Baum met her mother, a Russian immigrant who took the Brooklyn bus, and her brother’s family, who came from New Jersey. Baum, who came to the 2002 rally as a high schooler, was happy to show her niece and nephew what standing against antisemitism looks like but was disappointed by the turnout, she said. “I think because of assimilation, a lot of Jews have gotten too comfortable.” 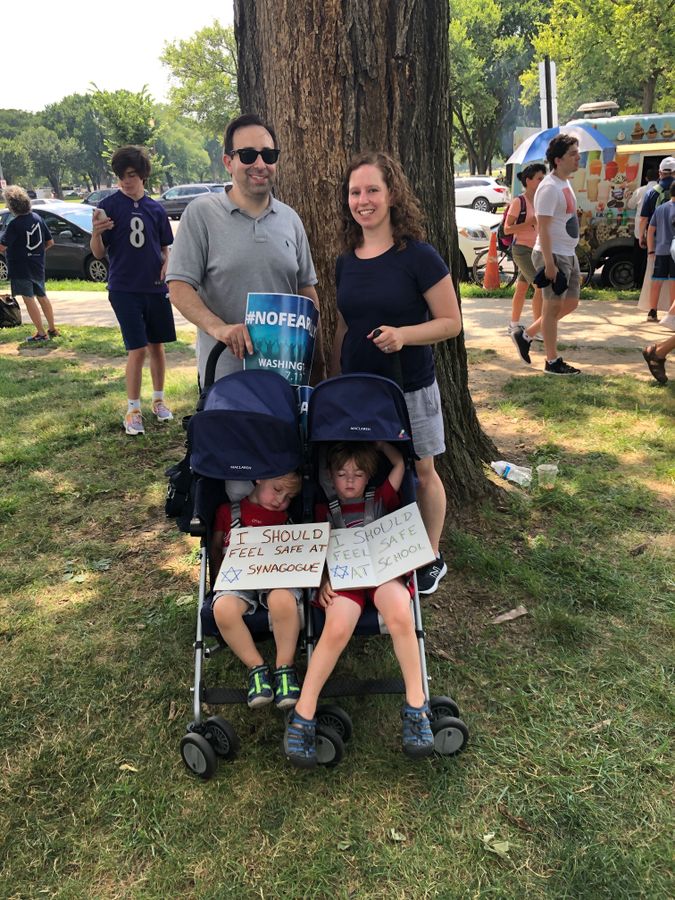 Miriam and Eric Wachter brought their two sons to the rally. Photo by Rebecca Salzhauer

“Our synagogue where they go to preschool was vandalized,” Miriam Wachter said. “We want them to see that we stand up for hatred against anyone and against ourselves.”

While a crowd gathered in front of the stage, clusters of people sat on picnic blankets or stood in the pockets of shade. Two older couples from Fredericksburg, Vir., brought folding chairs, umbrellas and snacks.

“I marched for Soviet Refuseniks in the seventies, then I married one,” Olivia Dolgin, one of the women, said, referring to her husband, Ben. “I’m sick of this.”