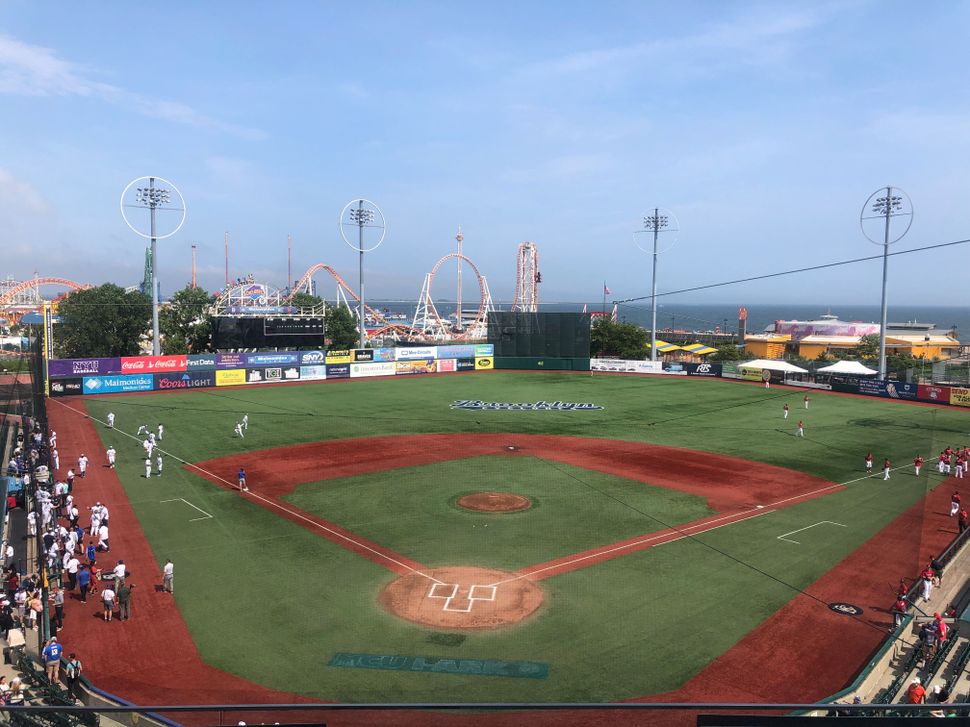 Sure, Lipman’s team — made up of soon-to-be Olympians — had pretty much destroyed the Fire Department of New York’s amateur team, with a final score of 12-3.

But beyond his team’s victory, Lipman endeared himself to the crowd by signing baseballs and taking pictures with fans impressed by his one-of-a-kind tzitzit-adorned Team Israel hoodie, the strands of which he tied himself — and because he led a widely-attended and rousing prayer session by the concession stand just ahead of the first pitch. 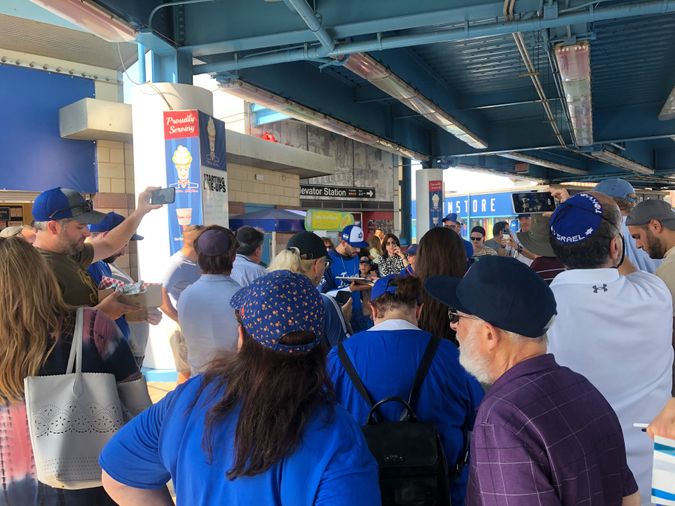 Team Israel pitcher Shlomo Lipman led the davening by the concession stand before the team’s exhibition game in Coney Island on Sunday, July 11.

Lipman himself, who noted that he was studying Torah on the way to the game, seemed to understand that it’s his observance and athleticism in combination that make him stand out.

“To be able to play baseball at a high level while studying Torah — two things I’m really passionate about, two things I think are really important — I think it was just sanctifying God’s name in the best way possible, and it was really emotional,” he said.

The game at Coney Island, despite a high level of play, felt a bit like a little-league baseball game in the stands, with many a Jewish twist. Most of the approximately 1,500 people in attendance, according to Peter Kurz, the general manager, have a connection to someone on the team. The advertisements displayed on a big screen by the scoreboard touted the Jewish Press, JewishLink, and the 5 Towns Jewish Times. Some fans snuck food from home into the stadium and snacked on croissants with tuna salad and microwave popcorn while talking across the aisles to friends. They sported Team Israel gear, but also Yankees, Mets and Dodgers swag. 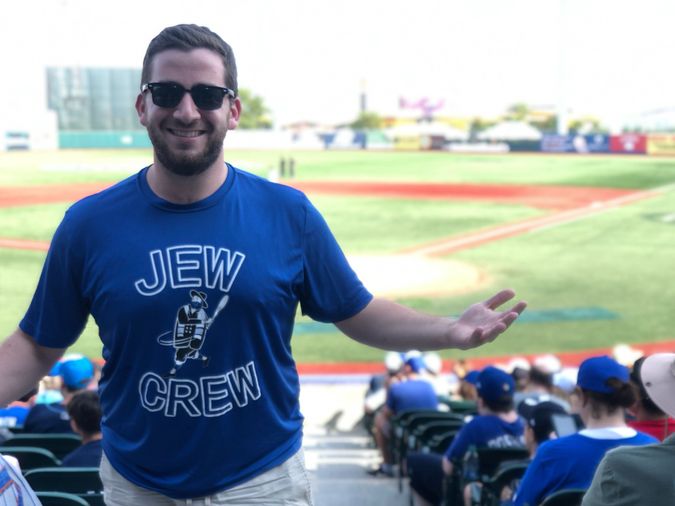 “I sent all that Israel stuff and you didn’t wear any?” a father scolded an adult daughter.

The game began with what could reasonably be described as a weird rendition of the American National Anthem, the word “bombs” strung out over multiple syllables, sung by a cantor whose name no one was able to provide. Hatikvah was better, made even more dramatic by the slow climb of the Thunderbolt roller coaster at Coney Island in the backdrop.

“I think he destroyed those two anthems totally,” said Kurz, laughing. “I don’t know who brought him here or why he was here, but I don’t think he sang it very well.” 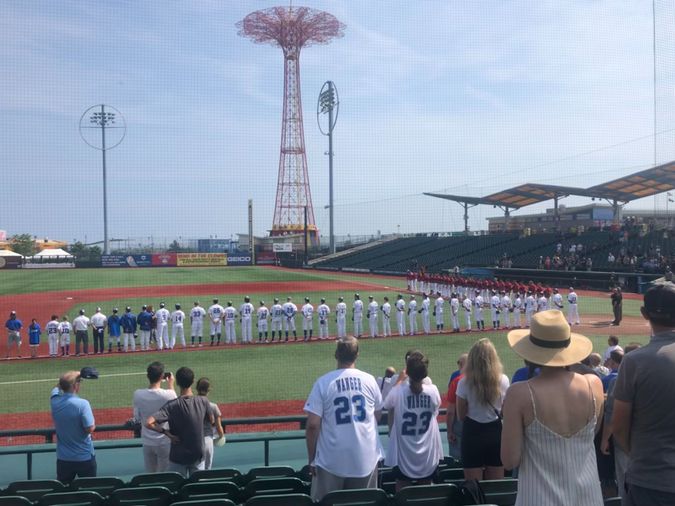 Fans and players stand for the American and Israeli national anthems before the game. Photo by Molly Boigon

The Israeli national baseball team is headed to the Olympics for the first time and is made up mostly of Jewish Americans who became Israeli citizens in the last two years to compete in this year’s games, though there are a handful of Israeli natives. Six teams in Tokyo will be competing for three medals.

There were no signs of anti-Israel protestors anywhere, though there was talk that Team Israel might encounter them at future exhibitions.

At this first exhibition game in Brooklyn, it was a largely visibly religious crowd, with big families, tischels, sheitels and kippot peppered among the visitors. The kosher concessions stand had a nearly constant line, with the kosher pretzel appearing particularly popular. The knish? Not so much.

Edwin Schneider, 65, had a hat covered in Olympic pins and Mort Fiedler, 63, was wearing an Olympics necklace. The two had driven in from Lyndonhurst, on Long Island. Schneider has been to 13 Olympic games.

“We would have had tickets to see Team Israel in Tokyo,” he said. “Since we can’t go to Tokyo, we figured this is the closest we’re going to get.”

The pair has been following and watching the Olympics together since 1984. 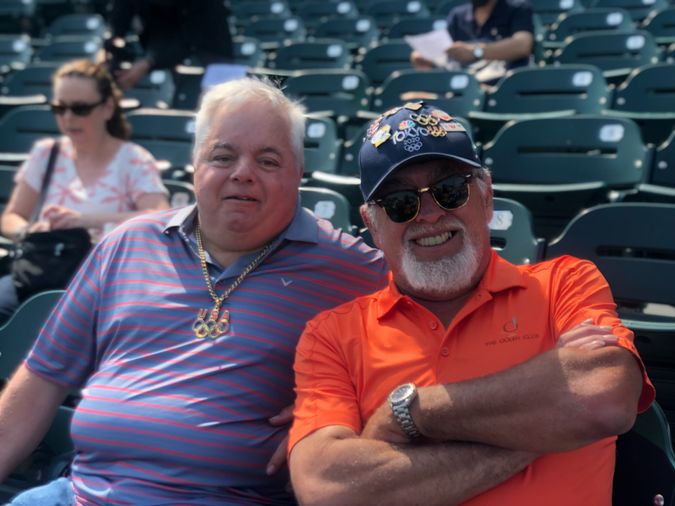 From left: Mort Fiedler, 63, and Edwin Schneider, 65, in the stands at Maimonides Park. Photo by Molly Boigon

“He’s like the brother I never had,” said Schneider.

“I had a good brother, so I don’t need him,” quipped Fiedler.

Team Israel breezed past the FDNY team until the sixth inning, when the firefighters got their first run, followed by sportsmanlike applause.

Lawrence, 44, who asked to be identified only by his first name, said he supports both teams.

His son, Raphi, who is seven, said his favorite part of the day so far was “the game.”

The game was co-hosted by Makor Disability Services, an organization that operates more than 30 homes for people with developmental disabilities in New York. Some of the residents were able to attend the game at Maimonides Park, said Tzally Seewald, the chief operating officer of Makor.

He said the residents were thrilled to come to the park, since they had been so restricted during the pandemic.

“There haven’t been many opportunities to go to real social settings,” he said. “This is probably one of the first events they can go to where they don’t have to wear masks.”

Around the seventh inning, the score was still 12-1, and the crowd started to get restless. There was chatter about the “mercy rule,” which would end the game early. A rumor circulated that the FDNY did not want to quit. The crowd mostly stayed put. Someone made a joke about the San Diego Padres’ third baseman, Manny Machado, really being named Manny Machadowitz.

Conversation turned away from baseball: “They got engaged on Masada,” said one man to another.

Ultimately, the FDNY team squeezed in two more runs in the ninth inning. The pounding bass from Coney Island’s disc jockey seemed to get louder, and some shivered as the sun slipped below the Thunderbolt.

Ryan Feuerstein, 22, made what appeared to this novice sports reporter as an incredible catch of a foul ball to the back-right of home plate. He handed the ball off to a couple from Midwood who only wanted to give their first names, Sarah and Charlie, and who said they caught a foul ball on their first date at Maimonides Park eight years ago. 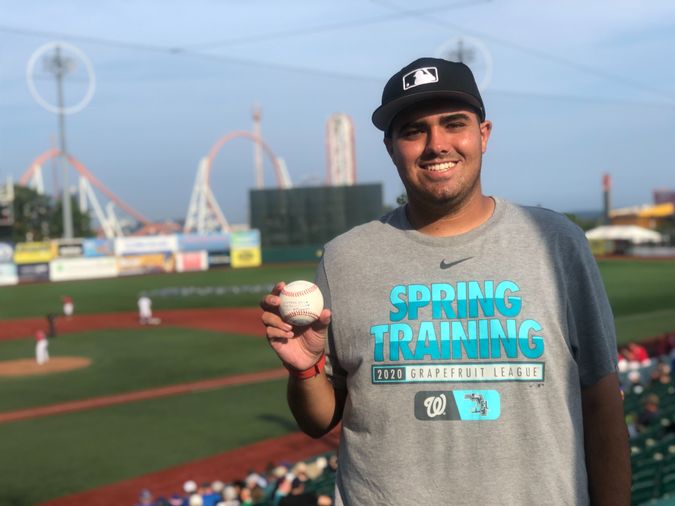 “I positioned myself there knowing that that’s a hot spot for fouls,” Feuerstein said. “I’ve caught over 2,000 baseballs.”

Asked about how he thought the game was going, he offered this sound analysis:

“It’s a team of mostly professional baseball players playing against amateurs,” he said. “So far, it’s about what I expected.”

Game two of the exhibition tour is Monday night in Rockland County versus the New York Boulders, an independent professional team.

Correction, August 9, 3:00 pm: A previous version of this story incorrectly referred to the Thunderbolt roller coaster as the Thunderdome.