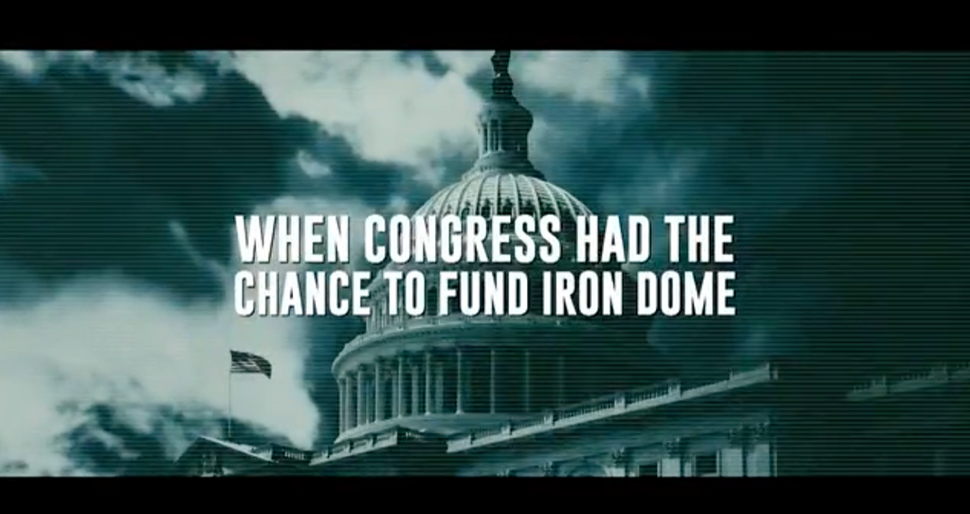 Sheffey railed against this May 2021 ad from American Action Network, part of a GOP-led effort to falsely paint Democrats as opposing Iron Dome funding for Israel. Courtesy of Steve Sheffey

The annoyance oozed out from the newsletter he sent in late May, a newsletter that is, arguably, the most widely shared local Jewish media in Chicago.

Republicans in Congress had spent the prior days claiming Democrats in the U.S. House had voted against funding a refresh of Israel’s Iron Dome missile defense just weeks after the system had saved countless lives amid this spring’s sustained shelling by Hamas. In truth, the Democratic and Jewish activist from Chicago insisted, GOP leaders had twice manipulated an arcane bit of House procedure to claim Democrats were anti-Israel. 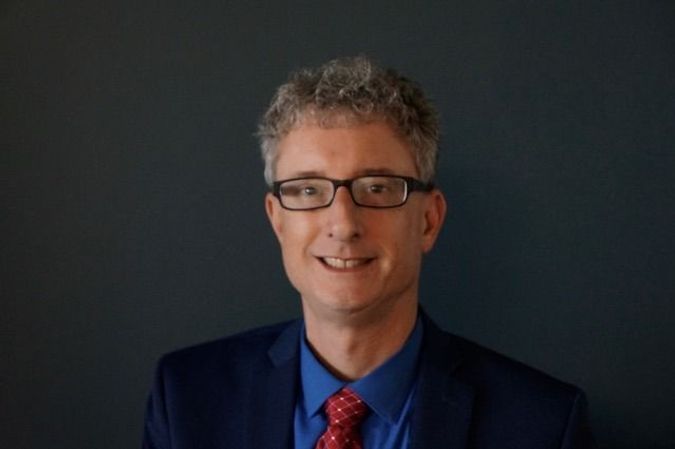 Sheffey started his newsletter in 2006 for a few friends in the Chicago area, but it has grown to reach thousands of readers across the country. Courtesy of Steve Sheffey

“This is political theater at its worst,” Sheffey harrumphed on May 23. “If you see crap like this on social media, speak up, and let whoever posted it know the damage they are doing to the pro-Israel community by spreading lies like these. If you need the facts, contact me—that’s what I’m here for.”

His 15-year-old, free weekly email newsletter may be called the “Chicagoland Pro-Israel Political Update,” but the reach of his breakdowns of issues of Israel and American Jewish politics – plus links to random, irrelevant funny videos — stretches far beyond his locale. It is carefully read in Congress and the Knesset, the White House and Beit Aghion, the offices of AIPAC and JPAC, and living rooms in the Five Towns and Flatbush. His phrases and arguments echo across social media, pop up in position papers and Congressional floor speeches. In what may be our hyper-partisan age’s sincerest form of flattery, Sheffey’s takes are regularly taken out of context by the hyper-political folks at sites like Breitbart.

Among his biggest moments, Sheffey said, was persuading a skeptical Democratic congressman to support the 2015 deal to curb Iran’s nuclear weapon capabilities. 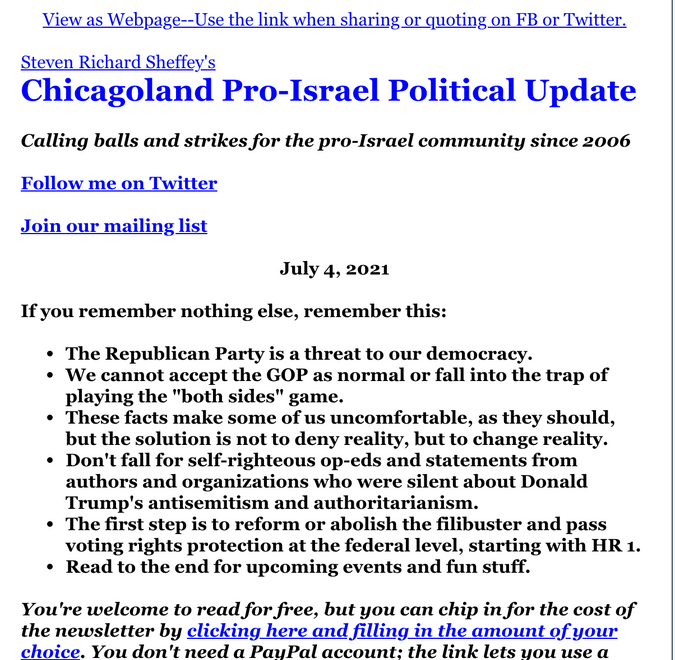 “A member of Congress actually called me while I was driving in my car and said, ‘I’ve decided to vote for the Iran deal, I want to tell you right away, and thank you for your help,’ ” he said. “I was told that another member of Congress sent my newsletter to the entire Democratic caucus twice during the debate on the Iran deal.”

More recently, Rep. Brad Schneider, an Illinois Democrat, got in touch as the GOP tried to gin up the claim that Democrats had opposed Iron Dome funding, said Dana Gordon, a fellow Chicago-area progressive activist. “There’s a congressman who is very good on Israel and very knowledgeable on Israel, and still his office sought Steve out to say, ‘How can we get the truth out?” she said.

Sheffey declines to disclose the precise number of recipients or identify his high-profile subscribers. But he did offer that his emails have a 52% open rate — that’s the percentage of recipients who open his email — and the rate at which readers click on links he provides is 13%. Both are stratospheric levels of engagement for such a vehicle. Constant Contact, the popular email management service he uses, maintains that an open rate of 30 percent is a “top-tier” score.

“The reason people listen to him — and I know that elected officials and his staff alike are reading his newsletter — is because he combines unique insights with timely, relevant developments that the Jewish community and Jewish Democrats specifically are most interested in, and he provides in-depth analysis in a unique way,” said Halie Soifer, chief executive officer of the Jewish Democratic Council of America, which employs Sheffey, a longtime political strategist, as a senior adviser. “There are a few things that you can count on in this world, and Steve Sheffey’s newsletter arriving on Sunday at 6 a.m. is one of them.”

Sheffey, a 61-year-old married father of three with fewer than 750 Twitter followers, would seem an unlikely figure to attain this level of relevance. He’s long been a Windy City fixture in U.S.-Israel and Democratic politics, serving seven years in the 1990s on the board of Chicago-based pro-Israel group CityPAC and frequently involved in Democratic campaigns on both local and national levels. But his actual profession is more mundane — he’s a corporate lawyer who has worked primarily for auto insurance firms. 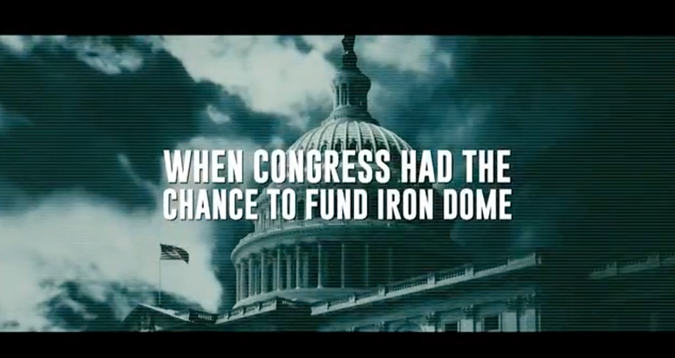 Sheffey railed against this May 2021 ad from American Action Network, part of a GOP-led effort to falsely paint Democrats as opposing Iron Dome funding for Israel. Courtesy of Steve Sheffey

Indeed, when his newsletter began as an email to a dozen friends in 2006, he had no designs on it becoming a significant platform. His friends, though, found that Sheffey had a knack for simplifying complex political issues and providing progressive answers to right-leaning rhetoric. They passed it on to others, and his email list grew until, in 2010, he moved it to Constant Contact.

“That’s why I started the newsletter,” Sheffey said, “because there were some things that just weren’t being said that I thought needed to be said. Some people are persuaded, and some people just like to hear that they’re not alone in thinking what they think.”

Gordon, the progressive activist, who was among the original email recipients, is unsurprised by the newsletter’s popularity.

“He’s the nicest guy in the entire world and very unassuming, and then you read his newsletter and it’s very forceful and strong,” Gordon said. “You may not agree with the viewpoint he’s coming from, but you can’t ever disagree with his facts.”

That’s not to say his views haven’t been controversial. In 2006 and 2008, for instance, he advocated for the defeat of then-Rep. Mark Kirk, an Illinois Republican, by Democratic challenger Dan Seals, who went on to lose to Kirk in both elections. Pro-Israel advocates on both sides of the political aisle took umbrage because Kirk was well-regarded for his support of the Jewish state, but Sheffey maintained that Seals would be just as good and promote progressive policies.

“I talked to a Jewish member of Congress who clearly knew about this stuff,” recalled Sheffey, “and I asked, ‘Am I doing a bad thing? Is Kirk really that important?’ and the member said to me: ‘There’s no question he’s helpful. But all these things would have happened without him, too.’”

In a sense, the underlying mission of Sheffey’s work is to reclaim the term “pro-Israel” from Republicans and other American right-leaning activists who seek to wrap themselves in that mantle to the exclusion of those who criticize the Israeli government or show empathy for the plight of Palestinians. It’s a prominent theme, reiterated in many newsletters including his most recent, which opened with this bullet point: “Israel’s policies do not excuse antisemitism, but criticizing Israel’s policies, real or imagined, is not necessarily antisemitic.”

Despite its longevity and growth, Sheffey’s newsletter remains charmingly low-tech. There are no photos or fancy designs, just a weekly sermon of sorts with a list of bold-faced bullet points at the top for people who don’t want to take the time to read his longer explanations and arguments. There isn’t even an easily accessed or searchable archive; to read older newsletters you have to click on the link for “Last week’s newsletter” week by week until you find what you want.

His weekly routine is equally simple. Unlike many newsletter authors and bloggers, Sheffey has no Google News alerts set to feed stories. Rather, he e-mails himself articles or social media posts that pique his interest throughout the week and, by Thursday he composes an essay that incorporates them.

The reason he publishes on Sunday mornings is, he said, because he’s confrontation-averse — he’d rather not be roped into debating what he writes at his Conservative shul on Shabbat and “since Sunday is the day that’s furthest away from Saturday, I figured they’ll forget about it by the next Shabbat and I can have a pleasant Shabbat.”

Sheffey also uses his audience to promote events he’s hosting – often fundraisers for Jewish Democratic candidates – and sells space for other community events. Donations cover the cost of his email service, but he doesn’t have sponsors and said he has no interest in making much money off the newsletter. Instead, he basks in the unusual niche he’s carved for himself.

“Perhaps the biggest fringe benefit, by far, is that I’ve got this informal network of people — current members of Congress, former members of Congress, other people — who I can call up or email and say, ‘Look, you’re totally off the record, just between you and me. Am I nuts?’ ” he said.

While occasionally the newsletter seems redundant, that’s as much because the news on Israel is so cyclical and, to Sheffey’s mind, the Republican effort to politicize the Middle East is never-ending.

“I always wonder each week if this is the week I don’t have anything to write about,” he said. “And it’s never happened.”