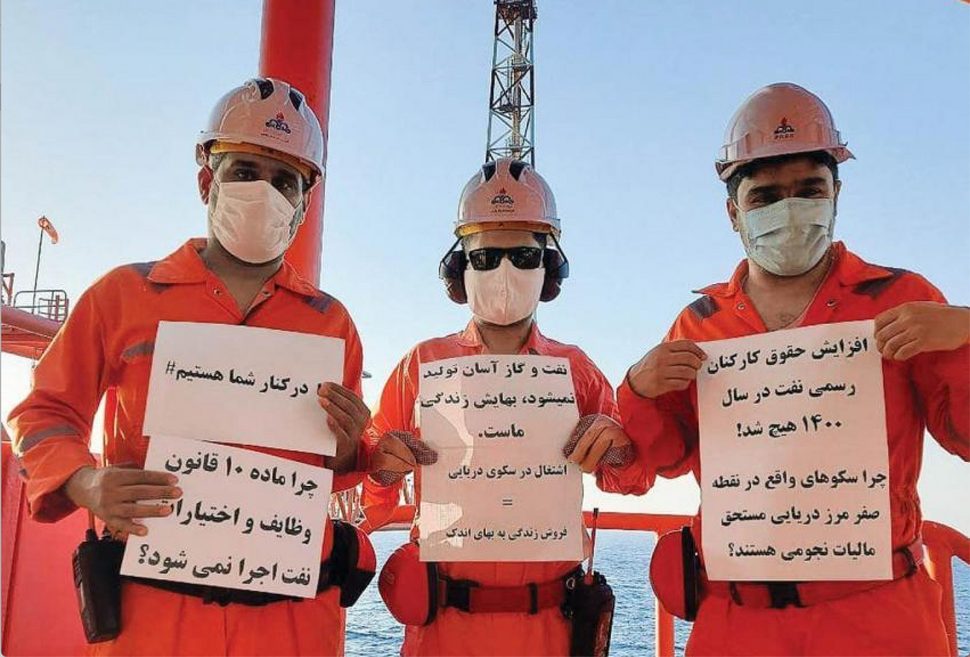 Oil workers in Iran holding up signs of protest. Courtesy of Twitter

Iranian American and Jewish activists are voicing support for striking Iranian oil workers who are demanding Iranian regime’s state-owned companies pay their past due wages, pay higher wages, and provide other benefits.

Iranian American activists who are not Jewish said the latest Iranian energy workers’ latest nationwide strike, now entering its third week,has been a major blow to the Iranian regime’s already faltering economy which has been suffering due to U.S. sanctions. The strikes could potentially bring down the regime, say activists here.

“The workers have been striking off and on for nearly five years in various parts of Iran,” said Mansour Osanloo, an Iranian trade union leader and activist now living in New Jersey.“But now with the oil, gas and petrochemical workers striking, there’s no money coming into the Iranian regime’s coffers and this could seriously hurt the regime.” 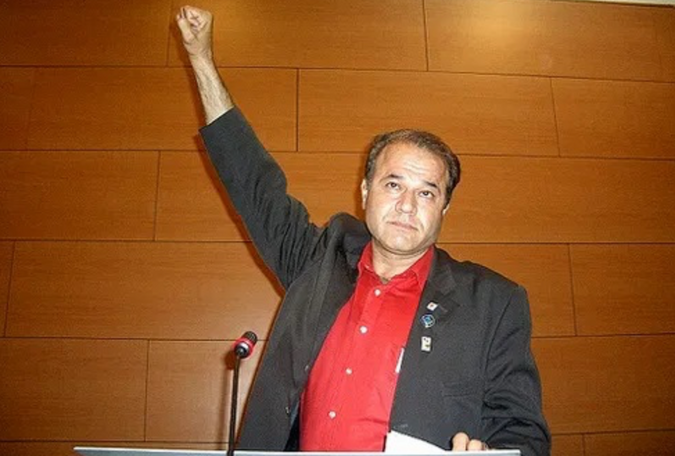 The average contract worker in Iran’s oil, gas and petrochemical industry makes close to $100 per month, and workers are prohibited by the Iranian regime from forming their own independent labor groups, said Osanloo. Official labor unions in Iran are controlled by the regime and do not advocate on behalf of workers.

Other Iranian American activists said the energy sector workers’ strikes have also encouraged strikes and protests from many of Iran’s truck drivers, teachers, retired government workers, agricultural workers and other industrial sector workers. They said the situation has become so financially difficult for so many families that workers in Iran are willing to endure the regime’s brutal reprisals for striking.

“The regime imposed severe consequences on those who strike, even on their families,” said Cameron Khansarinia, policy director for the National Union for Democracy in Iran, a Washington D.C.-based opposition group to the Iranian regime. “Iranians abroad, including the opposition, are exploring creative and safe ways to get money to the families of these striking workers and political prisoners. This can be an immense help and allow the strikes to last until their ultimate victory.”

Social media sites such as Twitter, Instagram and Telegram have been abuzz over the past several weeks with countless videos of various striking workers within Iran’s industrial sector protesting for better wages, time off from work, safer working conditions and health insurance.

One video posted on Twitter last week showed dozens of protesting dairy workers in the Iranian city of Isfahan beheading their own prized dairy cows in front of regime government offices and dumping several tons of milk on nearby highways in symbolic protest of the regime’s corruption and lack of economic opportunities.

Ali Ebrahimzadeh, an Iranian Muslim-born activist who heads the Los Angeles-based “Normal Life Council” a non-profit group raising awareness about human rights violations in Iran, said the widespread national strikes in Iran are a continuation of a civil disobedience campaign led by millions in Iran who refused to show up at the polls for the country’s recent elections.

“The average workers in Iran see themselves get poorer each year where they can now barely feed their families while the regime’s elite have gotten richer off the nation’s wealth and sent those millions of dollars overseas to terrorists,” said Ebrahimzadeh. “Average Iranians have had enough of this suffering and are coming out in massive numbers to protest.” 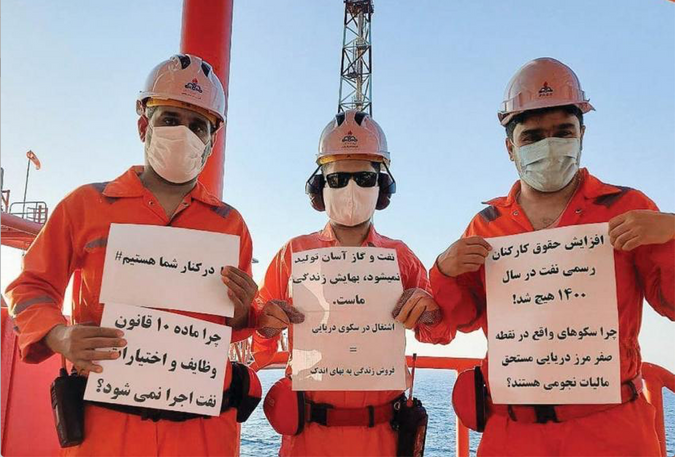 Oil workers in Iran holding up signs of protest. Courtesy of Twitter

None of the groups listed on the statement were American labor or trade union groups and Iranian American activists voiced concern with the lack of U.S. labor support for Iranian workers.

“American labor unions, the AFL-CIO especially— were once a key backer of unions battling repressive regimes,” said Iranian American activist Mariam Memarsadeghi based in Maryland. “In Poland, American labor institutions’ support for the Solidarity movement were instrumental in defeating Communism. Iranian workers deserve the same support and the outcome of their struggle is just as significant to the world’s security and freedom.”

Calls made for comment to major U.S. unions such as the AFL-CIO union, the International Brotherhood of Teamsters, Service Employees International Union (SEIU) and the Screen Actors Guild – American Federation of Television and Radio Artists union (SAG-AFTRA) were not returned.

Several Iranian Jewish leaders in Southern California and New York declined to comment on the situation with striking workers in Iran. For more than four decades they have primarily refrained from commenting about political matters concerning Iran for fear of the regime’s reprisals against the 5,000 to 8,000 Jews still living in Iran.

Still many individual Iranian American Jewish activists said they have expressed their solidarity with the workers in Iran who are facing a dire situation with the survival of their families.

“These people are being abused under the harshest conditions,” said George Haroonian, an Iranian Jewish activist based in L.A. “To support the striking workers of Iran, who are only asking for fair wages and fair treatment interestingly by mostly government owned entities, is as American as apple pie and baseball.”

Other Iranian Jewish activists expressed sympathy for the striking workers in Iran because many of their ancestors faced similar financial struggles trying to make ends meet while living in extreme poverty in Iran.

“Workers have always constituted the heartbeat of Iran and as Iranian American Jews, we should know,” said Tabby Rafael, an Iranian Jewish writer and co-founder of the L.A.-based “30 Years After” Iranian Jewish non-profit group. “In Iran, our grandparents, great-grandparents and ancestors were almost all downtrodden workers who only wanted a chance at a better life.”

The Progressive Zionists of California , a pro-Israel non-profit group based in Northern California, also released a statement expressing support for the striking workers in Iran on social justice grounds.

“It takes tremendous courage and perseverance to demand accountability, fair working conditions, and fair wages, especially in the face of a repressive and authoritarian regime,” stated the group in its letter. “We know and these brave workers know, these things cannot and will not happen without their work.”

Dr. Danial Jafari, president of the Iranian-Americans for Liberty, a nonprofit advocacy group opposed to the Iranian regime and based in Washington, D.C., said his organization is reaching out to American Jews and non-Jews to support the striking workers in Iran.

“I call on my dear friends in the Jewish American community to please consider the true cost of this regime’s existence to Israel, their freedoms, and their economic prosperity,” said Jafari, who is not Jewish. “We must join together in America to say no to the Islamic regime in Tehran!”

For their part, Iranian American activists said they will continue to advocate on behalf of the striking workers in Iran in the U.S. media and among U.S. elected officials to help bring about monumental changes in Iran.

“I honestly believe that if these workers’ strikes continue for another two months in Iran, it could potentially cause the ultimate collapse of the regime since the Ayatollahs will not have the cash to pay all of these striking workers, their own corrupt cronies, their security apparatus that cracks down on protestors and all their terrorist proxies in the region,” said Osanloo.