‘Arnie could help you’: In Surfside collapse, a P.E. teacher who touched the heart of everyone he met 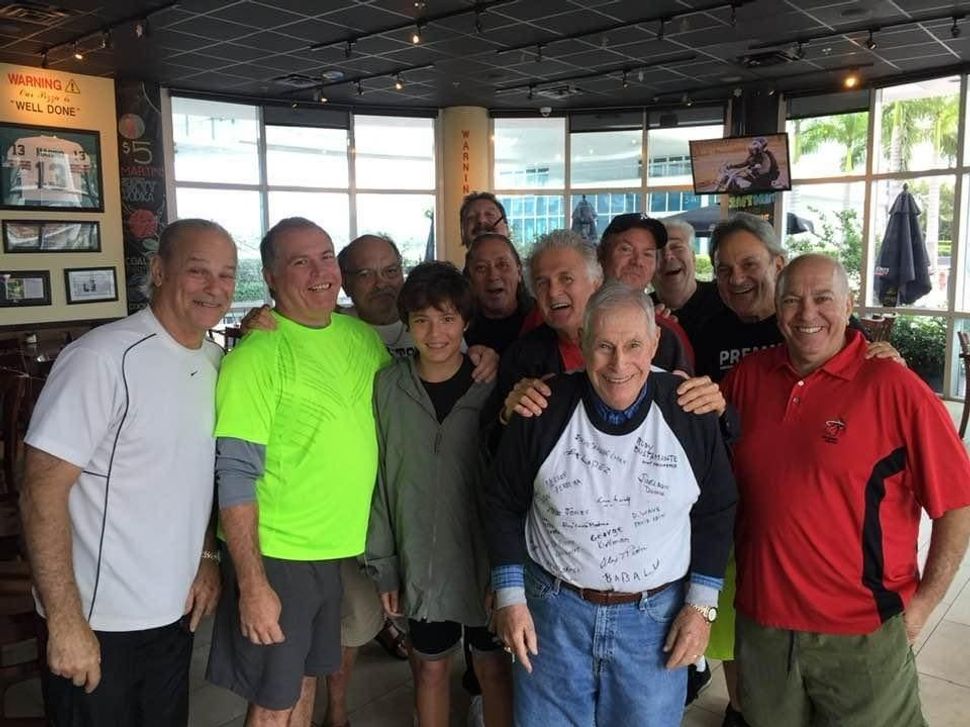 Arnold “Arnie” Notkin at a reunion with his former charges in 2015. Courtesy of Steve Cohen

When Janet Howell learned that her old coach, Arnold “Arnie” Notkin, was among the missing in the Surfside condominium collapse, memories of a difficult childhood in Miami Beach came flooding back. In those days, Miami Beach was more strongly associated with trouble than with glamour, and her parents, Honduran immigrants, were among many in the neighborhood who worked long hours to keep their family afloat.

She credited “Mr. Notkin” — her fifth-grade physical education teacher at Fienberg Elementary School, but also much more than that — with keeping her off the street.

Arnold Notkin tended to kids born with little privilege. Whether it was engaging them in after-school sports, taking them to the circus or serving as a crossing guard, Notkin’s care and attention touched seemingly everyone who encountered him, and was still felt more than 40 years later by former students who said the coach’s mentorship put them on the right path.

Notkin, 87, and his wife, Myriam Caspi Notkin, 81, lived on the third floor of the Champlain Towers South and were in the building when the 12-story building collapsed on June 24. Crews recovered their remains on July 9. The Notkins were among 97 who are dead in the disaster, with eight people still unaccounted for.

The Notkins were regulars at Temple Menorah, where their funeral was held, according to the Miami Herald. Friends said his warmth and generosity reached far beyond his Jewish community.

If kids growing up in the area didn’t know Notkin as a P.E. coach at Fienberg Elementary in Central Beach, they knew him from the Police Athletic League, an after-school sports program. If they didn’t know him from the police league, they knew him as a counselor at Flamingo Park, or as a youth football equipment manager, or a coordinator of an amateur boxing program.

Notkin, who remained a fixture in Miami Beach after his retirement, was the kind of mentor who kids not only adore and remember, but also stay in touch with well into adulthood.

Steve Cohen, who knew Notkin from youth football, posted a picture to Facebook on June 24 of a 2015 celebration thrown for Notkin by former students. All of the people in the photo came from refugee families who fled the Cuban Revolution, Cohen said, and either knew Notkin from Central Beach Elementary or from Flamingo Park.

Like Howell, Cohen emphasized that Miami Beach was anything but glitzy back when he grew up there in the 1960s and 1970s. The boardwalks now lined with posh nightclubs and five-star hotels were instead dotted by liquor stores and government-subsidized housing.

“If you were a poor kid and needed help, Arnie could help you,” Cohen said. “When you don’t have cleats, he finds a way to get you cleats.”

If students’ fond memories of their coach remained vivid decades later, the affection was mutual.

In an interview with the Herald, Sandy Arbor, who had Notkin as a P.E. teacher in the 1970s at Fienberg Elementary, said he never failed to tout her gymnastics talent at school reunions, even decades after he had her in his class.

“It would be really cute … he would talk to whoever would listen,” she told the Herald. “He’d say, ‘This is Sandy Arbor and she was a superstar athlete when she was in elementary school.’”

Frances McPhee, who met Notkin when he was president of the local police athletic league, an after-school program, said the other mentors called his flock of happy campers “Arnie’s kids.”

“He was completely self-confident without self-satisfaction or arrogance; and what’s more, it was linked to a deep humility,” she said in an email.

One such “Arnie kid,” Howard Cohen, recalled Notkin going the extra mile to fortify his self-esteem.

Cohen (who is not related to Steve Cohen) said that as the son of two athletes — his mom was a fierce tennis player, his dad a hockey coach — he was embarrassed by his weakness in ball sports, even though he was a strong swimmer. When it was time for the Presidential Fitness Awards — an annual athletic aptitude test — Cohen seemed unlikely to demonstrate his own athleticism because the school did not have a pool.

Noting the youngster’s proclivity for climbing trees, Notkin found a test on which Cohen could excel: the pull-up bar. Cohen says he did 10, among the most in the class. The teacher also awarded him with a certificate of merit for “proficiency in stunts and climbing,” which Cohen keeps to this day.

Years later, when Cohen became a swimming coach, he applied some of the lessons he learned from his beloved teacher.

The same story spoke to what his former students described as Notkin’s defining quality — a desire to uplift people who were in poor circumstances. In an environment where many fended for themselves, it left an indelible impression.

“We always thought it was kind of weird,” said Howell, his former Fienberg student. “Like why does this guy care so much?”

‘Arnie could help you’: In Surfside collapse, a P.E. teacher who touched the heart of everyone he met