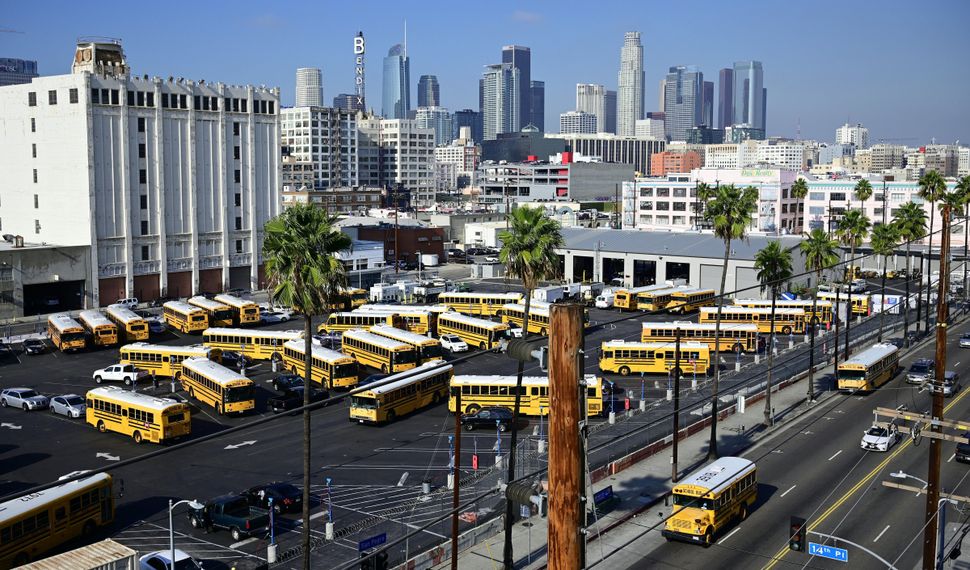 An intense campaign to derail a Los Angeles teachers’ union resolution supporting the Boycott, Divestment and Sanctions movement is working, say members of Jewish groups that banded together to defeat it. Pressure from the Jewish Federation of Los Angeles, the Anti-Defamation League and a host of other Jewish groups will likely mean the union will shelve or reject the resolution, which is slated for a September vote, said several teachers opposed to the resolution and familiar with the effort.

Jewish teachers have threatened to leave United Teachers Los Angeles en masse if the resolution passed in the union’s 250-member House of Representatives.

Scott Mandel, a musical theater teacher who sits on the House of Representatives as well as the union’s 36-member Board of Directors, said the measure was likely to fail because of the Jewish community’s swift action, which included a petition signed by hundreds of teachers and vocal support for new school board legislation.

If the resolution is defeated, it will mark a departure from a trend in American labor. Since the 11-day Gaza-Israel conflict in May, teachers’ unions in San Francisco and Seattle passed BDS resolutions, as did Vermont’s AFL-CIO state council and the longshoremen’s union in Oakland.

Efforts to stop the resolution began almost immediately after two of the union’s eight area chapters passed the resolution in May, triggering an automatic union-wide vote Sept. 1.

A new Federation-backed coalition, L.A. Parents Against Antisemitism, distributed a petition for teachers opposing the measure and a form letter for parents to send to their children’s teachers encouraging them to sign it. The petition, addressed to the union’s board and House of Representatives, said the resolution “dehumanizes and demonizes Jews and Israelis.”

The advocacy groups the American Jewish Committee, StandWithUs and the Israeli American Council, as well as the Southern California Board of Rabbis, joined the Federation and the ADL in the coalition.

According to Mandel, the resolution was both a product and a victim of its timing.

It was introduced in response to the May war between Israel and Hamas, and also late in the school year, when teachers may be less plugged in to union affairs — making the resolution easier to pass in area chapters, he said.

But it also introduced controversy at a time when unity feels especially critical for the country’s second-largest teacher’s union, which is currently in negotiations with Los Angeles Unified School District over returning to classrooms safely amid a resurgent pandemic.

“We’re going to need parent support in passing legislation,” Mandel said. “This is going to alienate voters, members of our community. It is just value signaling at its very worst.”

In addition to supporting BDS, the resolution expressed solidarity with the Palestinian people, condemned the Sheikh Jarrah evictions and called on Israel to stop bombing the Gaza Strip.

Larry Shoham, an English teacher who has been active in the letter-writing campaign, said over 800 teachers had signed the coalition’s petition so far. Like Mandel, he was confident the resolution was headed for defeat.

Shoham said he welcomed debate on Israel from other teachers, and that he was friends with one of the teachers who put forward the motion.

But he was one of several teachers who, though they were not present, said that chapter votes at which the resolution passed occurred with only a few dozen votes and with little or no debate. (The motion failed in Shoham’s chapter, whose area includes West Los Angeles and Hancock Park, where many Jewish teachers live.)

“There should be space in our union to disagree, but we really should not move forward on any initiative unless we have strong unity,” he said.

In an email, Maya Suzuki Daniels, a high school English teacher who introduced the resolution at one of the chapter meetings where it passed, said it had been “interpreted and manipulated” since then.

“There is a conflation around Judaism and the state of Israel that I find troubling and concerning — we should always discern and differentiate between a faith or identity and the political and military actions of a nation-state,” she wrote. “A motion against documented human rights abuses should never be interpreted as an ‘attack’ on another community. Jewish safety cannot and should not come at the expense of Palestinian lives.”

While she was unwilling to speculate on the outcome of the election, Daniels said she was heartened by a discourse around Israel that welcomes deeper analysis. “I am grateful for the ability to educate myself and others and remain engaged in a democratic process,” she said.

After the resolution passed in the North and Harbor area meetings — located in Northeast Los Angeles and South Los Angeles, respectively — UTLA issued a statement distancing itself from the resolution’s politics.

The Federation announced the formation of the coalition in a June 18 press release. On June 23, the group held an information session for Jewish Los Angeles public school parents, at which school board member Scott Schmerelson and an aide of another school board member, Nick Melvoin, took turns inveighing against the resolution.

At a school board meeting a few weeks later, Schmerelson and Melvoin co-sponsored a resolution addressing antisemitism, which allowed parents and teachers to speak publicly about their experiences facing antisemitism. That was by design, said Amy Leserman, a high school English teacher and vice president of Association of Jewish Educators, a group that advocates for Jewish L.A. public school teachers and students.

The school board’s resolution, which denounces “anti-Israeli rhetoric” but does not mention BDS, passed July 13.

While the resolution UTLA will vote on does not include any directive on curriculum, Leserman said it would embolden teachers to speak out against Israel in the classroom.

“In reality there is a huge web of laws that would be broken if any teacher showed bias against a Jewish student or an Israeli immigrant,” Leserman said. “But the important thing is it sets the tone. How does it leave students and families feeling?”

Perhaps the sharpest prong of the strategy was the threat of financial consequences for the union itself.

Leserman said enough teachers — both Jewish and pro-Israel Christians — had threatened to leave the union that UTLA treasurer Alex Orozco was calculating the budget impact of a loss of 500 teachers. UTLA’s annual dues are about $1,100, and most estimates place the total number of teachers in the union between 25,000 and 30,000. (UTLA does not release its total enrollment figure.)

In a June 23 information session held by the LAPAA coalition for Jewish LAUSD parents, Shoham said the goal of the unified efforts was to prevent a vote from happening at all, though that was not in the language of the petitions because “you get into issues of trying to disrupt a normal democratic process, which within these efforts can help the other side.”

The union can choose to table the resolution indefinitely, which Mandel, the union board member, said was now the most likely outcome. But if it did go to a vote, he was confident the resolution would fail.