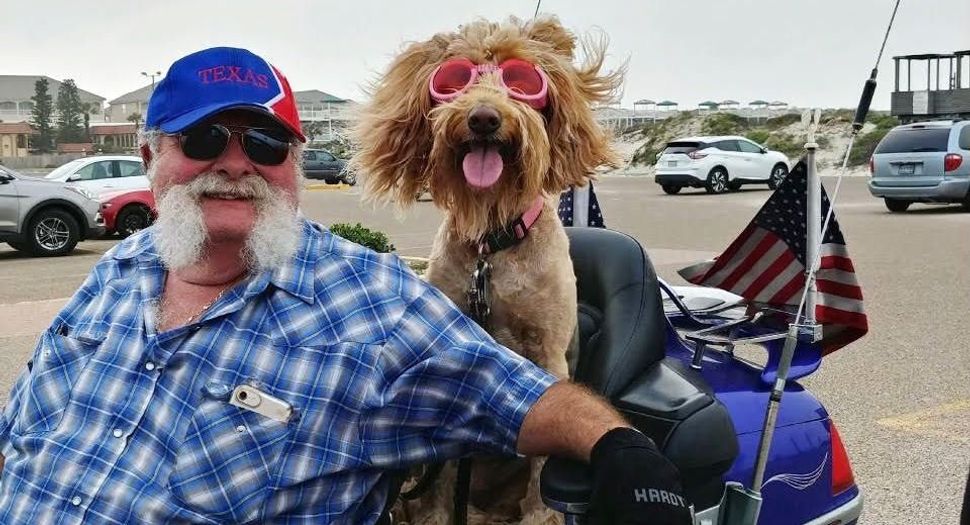 Harvey pictured with his dog and motorcycle. Courtesy of Harvey Lashinsky

A butcher, comedian and environmentalist walk into a bar. Turns out they’re all the same guy: Harvey Lashinsky. The Borscht Belt bred comedian used his Yiddish influenced sense of humor as a relief from his job at his family’s meat shop in a tiny Catskills resort town. Now, he adds another role to his resume — saving the most endangered sea turtles species in the world.

When a friend first told me about Harvey, he said the 75-year-old is one of the funniest people he’s ever met, and also that he might talk my ear off. Before Harvey could make an impression, though, I caught his homemade voicemail inbox:

“Oh-h-h, my father’s name is Ferdinand, my mother’s name is Liza-a-a. In between the two of ‘em, they called me fertilizer-r-r! Had a hen down on the farm, smart as she could be-e-e, she laid seven eggs every five days ‘cause she wanted her weekends free! Leav-e-e-e a message, we’ll call you back-k-k-k!”

In short, Harvey’s a character.

He’s in a cheerful mood when he calls me from his home in South Padre Island, Texas, where he retired after 30 years raising two children and working in Colorado’s restaurant industry. Nowadays he fills his time visiting with his grandchildren and volunteering at the local beach during turtle season.

But his mind still whirls with memories from his youth in Monticello — time spent hunting cottontail rabbits and snowshoe hares with his uncles in the winters, the sound of Jimi Hendrix’s guitar riff at Woodstock and the blur of racing Yamaha motorcycles at tracks in Peekskill and Maybrook. Most formative are his childhood days living above his family’s kosher butcher shop, where Harvey said a twelve-hour shift was merely considered a half-day of work. His Forverts-reading grandfather taught him about Yiddish, spirituality and how to cut meat straight off the block.

“If I wanted to see my mom and dad I went downstairs and pulled on their aprons. I had a knife in my hand by the time I was seven-years-old and I was a full fledged butcher by the time I was 12; I cut the meat for my own bar mitzvah.” 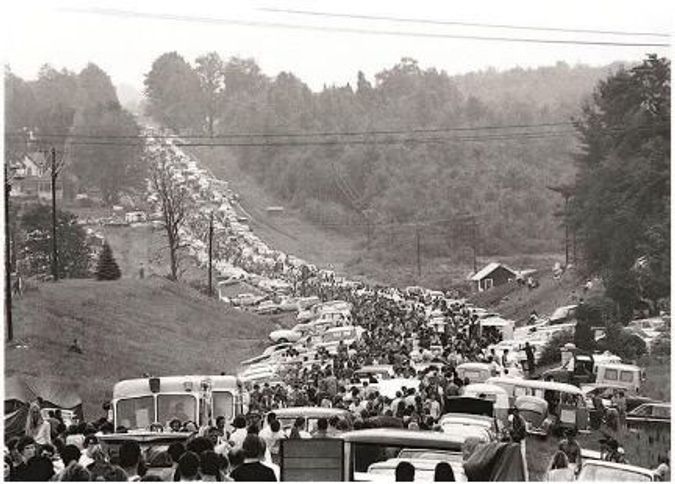 A photograph Harvey took on his brownie instamatic of Woodstock, 1969. Image by Harvey Lashinsky

A ticket out of Monticello

Harvey quickly realized comedy could be his ticket out of a lifetime slicing pastrami. He built up a reputation in his small high school as the class clown, and people came to count on him for a quick laugh – whether he was emceeing the talent show or performing in it. Going by the stage name “Harvey I. Lash” (pun intended) he later made his standup debut at the Homowack Lodge in Ellenville. People walked out of his first performance, but he got better, learning improv acting and how to play a rendition of “Sweet Georgia Brown” through a kazoo plugged up his nose. He made his way through places like the Raleigh and Grossinger’s in the Catskills, Catch A Rising Star and the Comic Strip in New York City and at the Jerry Lewis Telethon in Monticello and Newberg. He looked up to Mel Brooks, Rodney Dangerfield, George Carlin and Robin Williams. He doesn’t like to tell what he calls “long shaggy dog” stories, opting instead for punchy one liners.

“I don’t know if you saw the news yesterday but Willie Nelson was hit by a car. He was playing on the road again!”

This reminds him of another joke — one story often tangents into another— but the exuberance only adds to Harvey’s charisma.

“Oh my gosh,” he says with excitement. “Did I tell you the story about this little old Jewish lady who flies on an airplane to Miami? After the plane takes off and the sign says, ‘Seat belts can be taken off’ to walk around, she stands up and says very loudly, ‘Is there a doctor on the plane? Is a doctor on board?!’” Harvey says, a high-pitched note of fake hysteria straining his otherwise deep voice. “And this man comes running up and says, ‘I’m a doctor! What can I do for you?!’ She says,‘Oh, thank you doctor for being on board! I want you to introduce you to my daughter!”

Do people ever get offended by these?

Occasionally, he says. But to those who know Harvey, a kind word or helping hand is never far behind his punchline. Most of the jokes he tells me are too risque to put in print and many others go over my head, but none are too serious to keep the comedian from letting out a hearty chuckle at his own lines, making one feel like they should laugh along, too.

“I’m a believer that if nobody gets hurt feelings, or it isn’t totally disgusting, anything for a laugh is okay,” he tells me. His other advice? “Always end a phone call on a joke.”

The smallest sea turtles in the world

The moment that made Harvey an animal lover came in the form of a brown and white spotted bar mitzvah gift: a beagle puppy. Him, the dog, and a 22 rifle hunted pheasants and rabbits growing up, but Harvey insists he never shot anything he wasn’t going to eat. He followed his uncles into the Izaak Walton League, becoming chapter secretary and treasurer in his early 20s, and later volunteered with the Division of Wildlife in Colorado to help relocate grizzly bears. 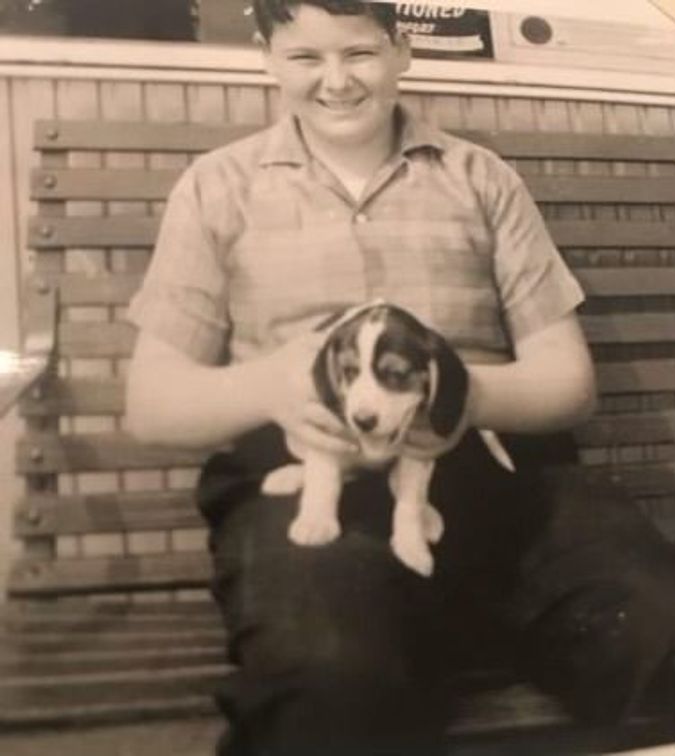 Harvey pictured with the beagle he was given as a bar mitzvah present. Courtesy of Harvey Lashinsky

Years after having pet turtles as a child, volunteering with the creatures now has been a way for Harvey to come full circle with his environmental efforts. It’s illegal to drive on the beach near Harvey, because the Kemp’s ridley sea turtles, the smallest sea turtle species in the world, are protected under the Endangered Species Act; an average nest has between 50 and 150 eggs. During nesting season in early April through July, Harvey and a biologist go down to the beach in government vehicles, often finding the animals wrapped up in fishing lines or nets. They also work to attach satellite transmitters to turtles to track where they go in the summer and fall, each one taking roughly five hours to attach.

This month, 5,000 people came to watch as Harvey and the other volunteers released 550 sea turtles out to the sea.

“It’s like my subconscious relaxes and I feel fulfilled. It gives me a good warm feeling when you can take these docile creatures that people were harvesting and protect them.” 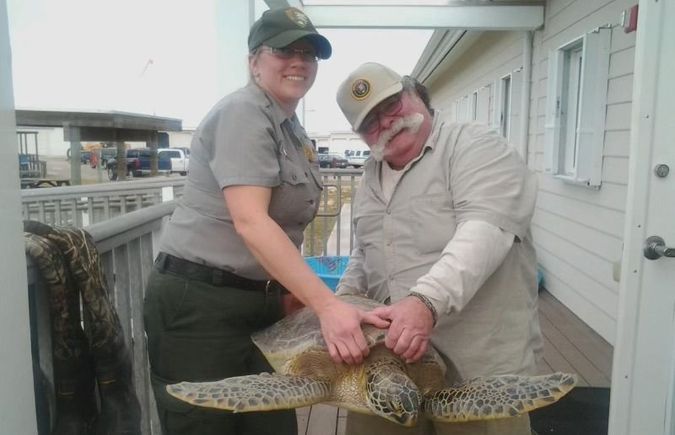 Those who have met Harvey on his journey are unlikely to forget him. Along the way, he married and divorced three times, traveled to all 50 U.S. states, went to community college, served six years in the military and broke 20 bones motorcycling. With so many tales, sometimes one wonders if the ultimate joke could be a fabrication of details. Yet something about Harvey’s innate genuineness, seasoned with dashes of his New York accent like salt and pepper, overshadows any doubts about his integrity, leaving only warmth and peals of laughter in their presence.

When I ask what he says when people wonder if he’s pulling their leg, he imparts some final Yiddish wisdom on me:

“There’s a word in Yiddish called the ‘emmis,’ and that means ‘it’s the whole godly truth.’ Yes, I’ve had a very interesting life — I just love to make people laugh.” 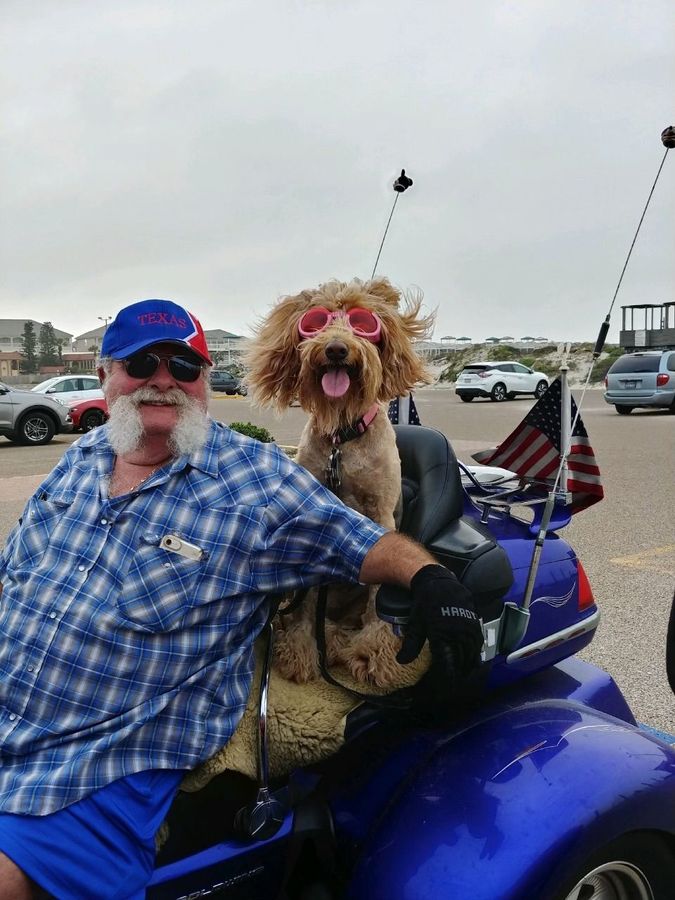 Harvey pictured with his dog and motorcycle. Courtesy of Harvey Lashinsky