Meet the eccentric Jews running in the recall election: a lawyer, a poultry prince and a billboard queen 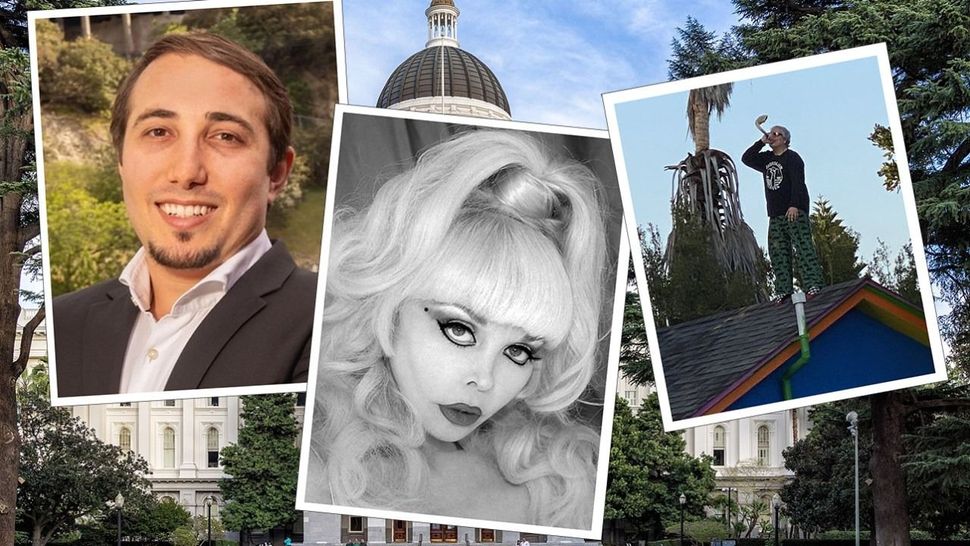 (From left) Leo Zacky, Angelyne and Dan Kapelovitz are among the dozens running to replace Gov. Gavin Newsom.

California’s $276 million recall election on Sept. 14 consists of two questions. The first is, essentially, “Should Gov. Gavin Newsom be given the heave-ho?” The second asks who should replace him, with 46 people on the ballot seeking to do just that.

At least three of the candidates are Jewish — a Republican businessman, a billboard diva, and a progressive attorney who opposes the recall altogether.

“I love San Francisco, it’s so beautiful,” said Dan Kapelovitz, Green Party candidate and criminal defense lawyer, musing on the city he used to call home. Now in Los Angeles, he’s on the ballot — but his position, curiously, is that Newsom, former mayor of San Francisco, should not be recalled.

“I’m one of the few candidates campaigning ‘vote no’ on the recall,” he told J., explaining that he supports the governor but has issues with how the California Democratic Party is advising voters. The party is asking people to refrain from selecting anyone from the list of 46, which includes Democrats, Republicans, Libertarians and independents, and to vote no on the first question and skip the second one (or, as Newsom put it at a press conference: “One question. One answer. No on the recall. Move on.”)

In fact, voters can answer either one of the questions, or both, or none. The Democratic Party decided not to put a big-name Democrat forward on the ballot as a way to appear united behind the governor. They are placing all of their bets on Newsom.

Kapelovitz is running as a Green because he thinks the party’s progressive ideas have the support of a lot of left-leaning Californians. He also supports ranked-choice voting, something he thinks might weaken the hold the two big parties have on seats in California elections.

One wouldn’t know all that from his candidate statement, however, which merely reads “Can you dig it?”

While there are several Republicans who have a chance of knocking Newsom out of the top spot, the one confirmed Jewish GOP candidate on the ballot is considered a long shot (he doesn’t even make ripples on recent polls), even though his family is well known among chicken-eating Californians of a certain age.

While there are several Republicans who have a chance of knocking Newsom out of the top spot, Leo Zacky is not believed to be one of them (he doesn’t even make ripples on recent polls). He is a scion of the Zacky Farms family, purveyors of a familiar supermarket brand of poultry out of Fresno until the plant shut down in 2018. (Historically, the farming of chickens and turkeys was a very Jewish industry in California in the 1920s and 1930s, especially in the Petaluma region.)

According to the L.A.-based Jewish Journal, the patriarch of the family came to the U.S. in 1903 and got into the bird business. The family had membership at Boyle Heights’ iconic Breed Street Shul. Leo Zacky is a great-grandson who helped revitalize his family’s brand after bankruptcy in 2012.

Despite that family background, Zacky told J. that he “is not Jewish, I’ve never been Jewish. I don’t identify with any religion. I never have. I’m just Leo.” ”

Asked about his grandparents, Lillian and the late Robert Zacky, he said, “My grandparents are Jewish, I guess. Lillian is awesome. I talk to her about five times a day.”

As a candidate, he’s running on a low-tax, low-business-regulation platform and is “strongly against mandatory vaccinations for adults and children, lockdowns and mask mandates” because he thinks Covid-19 is part of a global plan orchestrated by the World Economic Forum.

And then there’s Angelyne, the blond Los Angeleno known for the mammoth billboards regularly scattered around the city featuring … herself.

In 2017 the Hollywood Reporter investigated Angelyne’s background and established her as the former Renee Goldberg, daughter of Holocaust survivors, who was born in Poland and lived in Israel before coming to Los Angeles and reinventing herself as a blond bombshell famous for just existing.

(Angelyne’s campaign manager contacted J. directly to say the documents obtained by the Hollywood Reporter during its lengthy, in-depth investigation are “fake news.”

“I regret to tell you that the information you have about Angelyne’s ethnicity is not correct. Although she respects your religion, she is not,” wrote Jill Morris. The documents included photos, school records and a name change petition that together trace the trail of Angelyne’s identity.)

This is actually the second time Angelyne has run for governor in a recall election. The pink-clad diva had thrown her hat into the ring in 2003 when Gov. Gray Davis was recalled and replaced by Arnold Schwarzenegger.

Her platform, as stated on her website, ranges from positions on solving homelessness (paid for by “churches, mosques and temples”) and tax reform to “an annual masquerade ball for people to dress up like a governor!” and a bubble bath day where everyone has to clean something. She is also pro-otter.

With these three names on the recall ballot, the percentage of Jewish candidates is 6.5 percent, a far higher representation of the almost 3 percent of Californians who are Jewish. (Based on census results, the state’s population is around 39.5 million, and Brandeis University estimates there are 1.17 million Jews in the state).

It may surprise some people that the 46 names on the ballot are so diverse. But it really doesn’t take that much to qualify.

Candidates have to be citizens registered to vote in California. They can’t have been convicted of a felony for bribery or extortion. They’ve got to file a lot of paperwork, though, and submit a minimum of 65 signatures and pay about $4,000. With 7,000 signatures, filing becomes free.

Recall attempts are common in California. People tried to recall Newsom six times between March 2019 and June 2020, failing each time to qualify for the ballot. But this time things are looking dicey for the governor.

While a recent poll found that “keep the governor” is polling at an average of 48.8 percent and “remove the governor” at 47.6 percent, the “remove” voters are highly motivated and eager to vote. It’s estimated many on the “keep” side are unlikely to bother filling out a ballot on a topic they weren’t in support of voting on in the first place.

Because the replacement candidate with the most votes will take over if the recall vote passes, Newsom could wind up being replaced by someone who received, in numerical terms, a very small fraction of California votes.

The idea that it’ll be Leo Zacky, Dan Kapelovitz or Angelyne seems unlikely. But California politics are anything but predictable, and maybe next year we’ll all be celebrating Bubble Bath Day.

Meet the eccentric Jews running in the recall election: a lawyer, a poultry prince and a billboard queen