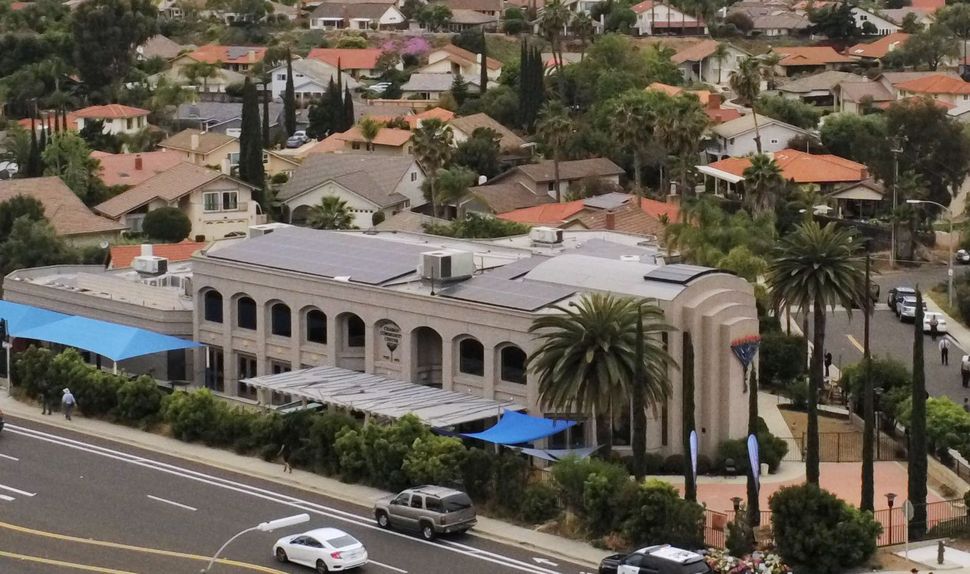 Chabad of Poway. By Sandy Huffaker/AFP via Getty Images

The family of a rabbi who made his San Diego-area synagogue the center of a sprawling network of tax fraud has regained control of the synagogue’s finances, state filings show, replacing a board that had sought to bring accountability to the institution.

For decades, Rabbi Yisroel Goldstein had exploited a lack of oversight at Chabad of Poway and at the Friendship Circle of San Diego, an affiliated charity, to enrich himself. He pleaded guilty in July 2020 to charges in the multimillion dollar scheme, and a lawyer, an accountant, and an insurance agent — all from outside of the synagogue’s orbit — volunteered to act as an independent board as the rabbi’s son, Rabbi Mendel Goldstein, took the helm.

Mendel Goldstein, who is in his early 30s, had not been implicated in his father’s case, which began before he was born. Nevertheless, both to stabilize the synagogue and reassure a community deeply shaken by the scandal, the new board aimed to provide that oversight, reviewing the new rabbi’s expenditures and steering both institutions toward more conventional governance.

Now, according to documents filed June 21 with the California Secretary of State, all three members of the Chabad of Poway board have been replaced. Stepping into their old roles: a congregant as secretary and, as the new chief financial officer, Mendel Goldstein’s father-in-law, Rabbi Yisrael Greenberg.

“Things can happen at every organization,” Greenberg said, referring to the scandal, in which at least 30 co-conspirators were involved. “Here, at this point, the people who are involved with this organization — the rabbi, the rebbetzin — want to see it working.”

Sources familiar with the situation, speaking on the condition of anonymity because they feared blowback from the synagogue, said the previous board had resigned.

Sam Dagan, a member of the board, said in an email that he stepped down after a year that was “positive and spiritually rewarding.”

“I enjoyed helping the local Jewish community through the challenging times of the pandemic,” Dagan said. “I served for the year I had committed to and then left to pursue other obligations.”

Dagan did not reply to follow-up questions. The former board members, Jeffrey Gelwix and Hal Wilson, declined comment or did not respond to requests for comment. 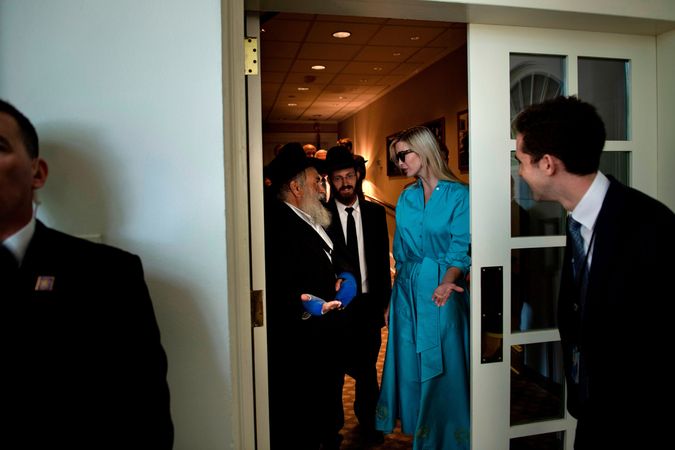 Rabbi Yisroel Goldstein speaks with Ivanka Trump before a national day of prayer ceremony at the White House. Between them is Goldstein’s son, Rabbi Mendel Goldstein, succeeded him as Chabad of Poway director. By Brendan Smiolowski/AFP via Getty Images

The apparent reversal from independent oversight to insider governance marks the end of what was a rare example in the Chabad world of a synagogue governed as much by its board as the rabbi that appointed it. More typically, Chabad rabbis have total authority.

The family-centered management at Chabad of Poway resembles the approach that enabled the previous rabbi’s scamming, even as the Goldstein investigation continues to unfold in public.

So far, 10 co-conspirators have been charged in addition to Goldstein, including at least four former Chabad of Poway congregants and Yisroel Goldstein’s brother, who lives in Brooklyn.

Greenberg, who lives in El Paso, where he opened a new $2.5 million Chabad synagogue last year, said his son-in-law deserved the benefit of the doubt.

He added that a Chabad synagogue didn’t need an accountant to be its chief financial officer, and that his 35 years running a similar institution would suffice.

“We’re not running investments, we’re not moving millions of dollars every day,” he said, adding that the synagogue still employed an accountant. “My job is more the overview, to make sure things don’t go in the wrong direction.”

During his decades of tax fraud, Yisroel Goldstein’s most lucrative grift was accepting five- or six-figure donations on behalf of the synagogue, returning 90% of it and keeping the remainder. He would then provide a receipt to the donor enabling them to write off the full amount. According to the Justice Department, the fraudulent donations totaled at least $6.2 million.

Greenberg did not say how he would be able to prevent that deceit from occurring at Chabad of Poway under his oversight, only that there was no reason to be concerned because Mendel Goldstein was a different person from his father.

One of the independent board’s goals may have been to cleave the Friendship Circle, a nonprofit that assists children with special needs, from Chabad of Poway. Yisroel Goldstein had used the Friendship Circle for a corporate donation-matching scheme in which congregants donated money to the nonprofit, which their corporate employers matched as part of a company program. Goldstein would then return the donation to the congregant and keep the corporate donation for himself.

Creating an independent board for Friendship Circle to oversee its finances would also help ensure that donations to the nonprofit would not make their way into Chabad of Poway’s account.

But documents Friendship Circle filed with the state on June 22 — the day after the synagogue updated its board — list as chief financial officer Mendel Goldstein’s brother Yehoshua Goldstein chief executive officer. Yehoshua Goldstein’s wife Devorah Bressler is listed as secretary, and the chief financial officer is Sabrina Kaechele, who is described on the organization’s website as Friendship Circle’s office manager.

Greenberg acknowledged that some members of the Poway Jewish community would bristle at the family’s takeover of the Chabad of Poway board. But he said it was a tiny minority, one or two members at most, who would leave the synagogue over it.

“There’s always someone who’s upset,” Greenberg said. “Let’s be honest: no one is happy with everyone. Were they served by the synagogue for the past 20 years? Yes. Were they happy? Yes. So now, all of a sudden something happens so you right away throw the shoes?”

Mendel Goldstein declined to comment, as did Patricia Kadosch, who is listed as the synagogue’s secretary on state filings.

Chabad of Poway drew worldwide attention in April 2019 after it was the target of a mass shooting that killed one congregant, Lori Gilbert-Kaye, and injured three others, including Yisroel Goldstein, who lost a finger in the shooting. (The shooter, John Timothy Earnest, pleaded guilty to murder charges on June 4.)

At the time, Goldstein already knew he was under investigation. His house and the synagogue were raided by the FBI and IRS late in 2018, and he had tipped off multiple co-conspirators about the investigation in the following weeks.

Because the prosecutor has recommended probation for Goldstein in exchange for his continued cooperation, the former rabbi’s sentencing has been postponed multiple times and is not expected until the conclusion of the investigation. It is currently scheduled for Oct. 26.