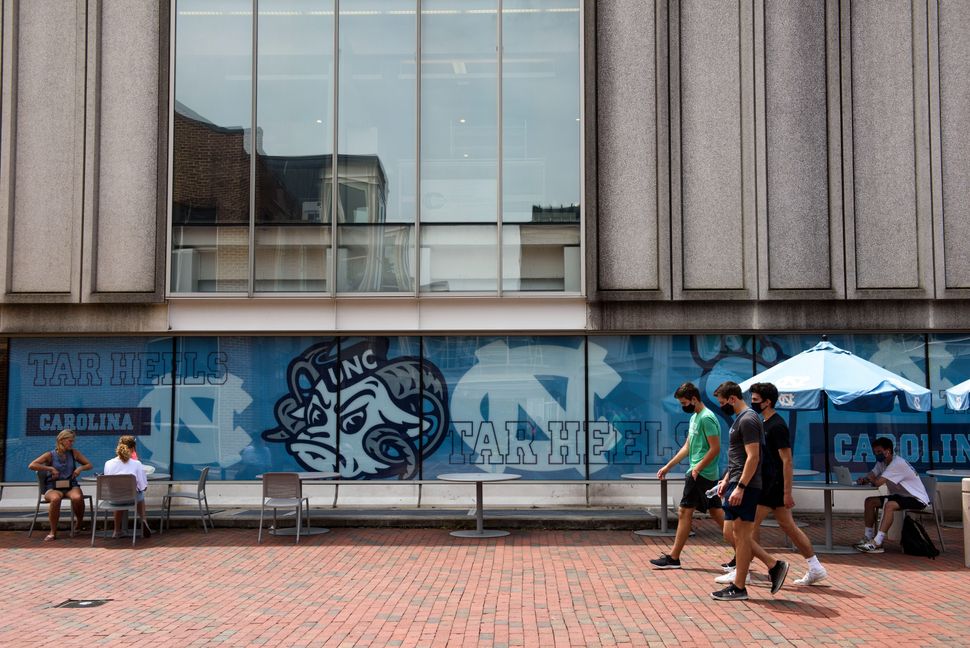 Students walk through the campus of the University of North Carolina at Chapel Hill on August 18, 2020 in Chapel Hill, North Carolina. The school halted in-person classes and reverted back to online courses after a rise in the number of COVID-19 cases over the past week. Photo by Getty Images

Kylie Broderick has made no secret of her support for Palestinian rights and the University of North Carolina graduate student posted stinging criticisms of Israel and its supporters during the height of fighting in Gaza last spring.

“God I love watching you Zionist dirtbags get ratio’d left and right,” Broderick wrote to another Twitter user in May, using slang for posts that receive a disproportionate amount of criticism. “Gaza is burning and all you care about is yourself.”

“When students’ identities are demeaned and dismissed, that’s where it crosses a line,” said Hillel director Ari Gauss.

Amid much lambasting of Israel at the time, her condemnations might not have garnered much attention. But now Broderick is teaching an undergraduate course about the Israeli-Palestinian conflict this fall on the flagship campus of a renowned public university, and pro-Israel groups have sounded an alarm. StopAntisemitism.org labeled her “antisemite of the week,” and Broderick’s course has become the latest campus flashpoint in academia’s debate over Israel. Critics see UNC’s decision to assign Broderick the course as indicative of the hostile climate that they say Jewish students sympathetic to Israel face on campuses across the country.

“Our concern is that there is a more systemic animus toward Israel,” said Mike Ross, board chair of Voice4Israel North Carolina. “It’s mind boggling that somebody like that, with those views, would be given a class to teach.”

Following the Gaza war and an associated uptick in antisemitic incidents in the United States, Israel advocates are bracing for a fraught school year as students stream back to campus after many spent more than a year at home due to the pandemic. The American Jewish Committee featured a “Back to School Week” event Wednesday discussing “Jew-Hate on Campus” and Alums for Campus Fairness released a report this week that showed high levels of student concern about antisemitism at colleges and universities, with many referencing incidents involving faculty and related to Israel.

But others are concerned that outrage over Broderick’s class, and other instances in academia where teaching about the Middle East conflict is called into question, is counterproductive and will fuel attempts to shut down legitimate speech.

“It suggests that support for Israel is somehow in tension with academic freedom and freedom of speech,” said Dov Waxman, director of Israel studies at UCLA. “That is a losing battle for the pro-Israel side.”

Some students are also concerned that wrangling over how the Israeli-Palestinian conflict is taught at UNC, including extensive coverage in the Jewish press and a threat of legal action from the Zionist Organization of America, have led the administration to distance itself from the topic altogether.

“UNC is not explicitly anti-Zionist or antisemitic — or any agenda — it just seems like they don’t have a dog in the fight,” said Zoe Beyer, a senior and former Hillel president who decided not to take the Israel course in past years after hearing from other Jewish students that it did not foster open discussion about the conflict.

“It’s not like UNC doesn’t have the resources to make a good and interesting class,” Beyer added, “but I don’t think there’s any will to do that.”

The controversy at UNC is part of a larger debate over whether protecting Jewish students on campus requires universities to police speech around Israel, or if the focus should be on swastika graffiti and professors who mock requests to move an exam falling on Rosh Hashanah — tangible issues that are often more easily adjudicated.

During the Trump administration, the Education Department embraced a definition of antisemitism that included some criticism of Israel and notched some notable victories, including a statement from the University of Illinois that said Jewish students “have the right to openly express identification with Israel,” following a federal investigation into discrimination at the school. The department also went after UNC in 2019, with a threat to defund the Middle Eastern studies center the school runs with nearby Duke University, following a conference about Gaza that outraged many local Jewish leaders.

Anger over Broderick teaching the course began in late July, weeks before classes began at UNC, and so far the criticism has focused on her social media posts and a copy of the syllabus for HIST 277, “The Conflict Over Israel and Palestine,” obtained by Voice4Israel.

“I don’t ever want to encourage them to believe there is reason to take on good faith the oppressive ideologies of American and Western imperialism, Zionists, & autocrats,” she wrote on Twitter. “(T)here is only one legitimate side — the oppressed — versus imperialist propaganda.”

Sarah Shields, a history professor at UNC who taught the Israeli-Palestinian conflict class until this year, is supervising the course. Shields said it was natural for scholars to draw conclusions about the area they study and share those thoughts with students. She also rejected the broader assertion, made by pro-Israel activists and students on campus, that much of UNC’s faculty was inappropriately hostile toward the Jewish state.

“Defining people as anti-Israel because they criticize the Israeli government over their treatment of Palestinians is the equivalent of defining people as anti-American because they criticize the treatment of African-Americans in this country,” Shields, the daughter of a rabbi who recalled raising money for the Jewish National Fund as a child, wrote in an email. “Some people would indeed define us in that way, but I reject the definition.”

But some Jewish leaders on campus say that framing Zionism as akin to colonialism and autocracy, as Broderick has, dismisses the deep connection many students feel toward Israel. Ari Gauss, director of North Carolina Hillel, said it was misguided to think that writing off Zionists altogether, in a class about Israel, would not infringe on the rights of Jews who take the course.

“A good number of these faculty don’t understand or don’t believe that Zionism is an intrinsic part of many Jews’ sense of Judaism,” Gauss said. “It’s not that one can’t be uncomfortable in class — there is value, pedagogically, in productive discomfort — but when students’ identities are demeaned and dismissed, that’s where it crosses a line.”

Beyer, the former Hillel president, said she was familiar with concerns that UNC’s programming about Israel, including this year’s course and the 2019 conference, has bordered on antisemitism. But she takes those claims with a grain of salt.

“A lot of Jewish people here conflate anti-Zionism with antisemitism and they associate criticism of Israel, or suggestions of a binational state, with hatred of Jewish people,” said Beyer. 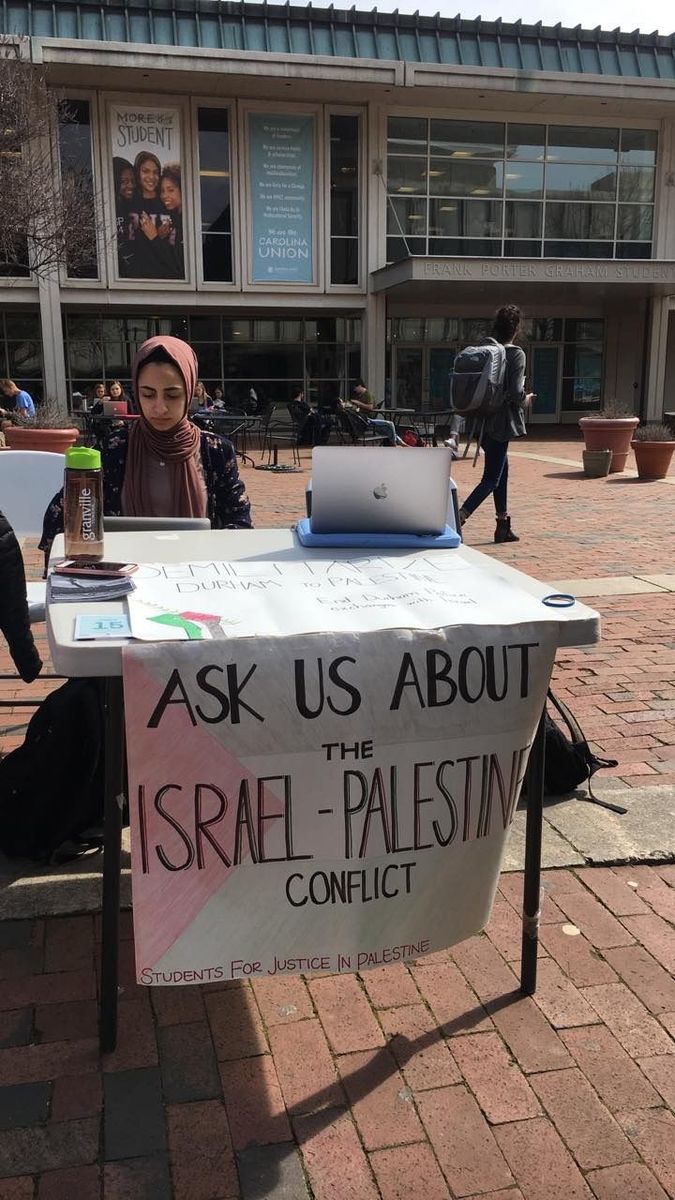 A student from the University of North Carolina - Chapel Hill chapter of Students for Justice in Palestine tables on campus in 2018. Courtesy of facebook

The UNC administration has largely stood by Broderick, declining to alter the course or change the instructor. Terry Rhodes, dean of the College of Arts and Science at UNC, said in a statement that the school was considering a variety of measures to monitor the course, including recording lectures, “blind” grading, periodic student surveys and providing information on how to file discrimination claims. “We are deeply committed to academic freedom, and academic freedom requires academic responsibility,” Rhodes said. She also noted that UNC also offers a course on “confronting antisemitism,” which examines discrimination against Jewish students on campus.

Zoha Khalili, an attorney for Palestine Legal, praised the university’s decision to allow the course to proceed while offering resources to students who are taking it in the event they face discrimination.

“If the university were just to say ‘academic freedom’ and dismiss any concerns people have, it would seem a bit callous because of the way people in the media have described the course,” Khalili said. But, she added, even if Broderick favors Palestinian perspectives in her class that would not be enough to remove her or cancel the course. “In a situation where someone is relying on academic materials,” Khalili said, “there is no requirement either in the law or university policies that some counter-narrative has to be presented.”

The administration’s response has still felt lacking for at least a share of UNC’s estimated 1,300 Jewish students. Abigail Adams, president of Heels for Israel, is in a group chat with two dozen other students frustrated by the university’s handling of the course and said several of them have reached out to UNC leadership but have not heard back.