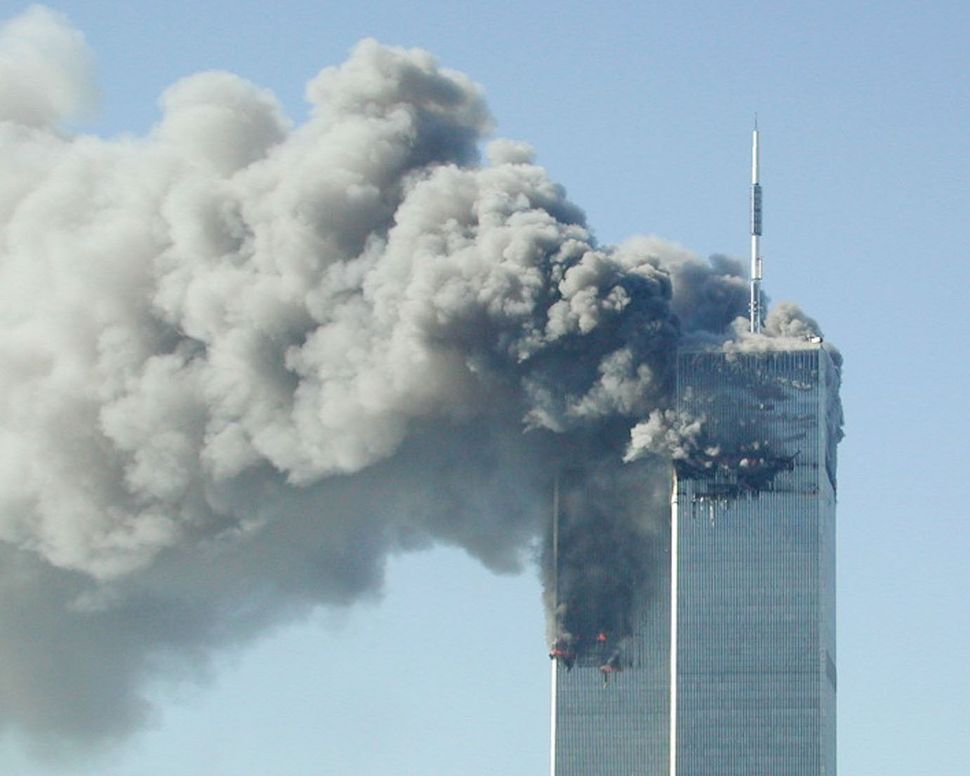 This is the 9/11 story I never got to write. It happened at Chelsea Piers, three miles from ground zero. It was inspiring — and ultimately, so tragic. It taught me about the importance of readiness, and how sometimes you cannot possibly prepare for what is coming.

I started that cloudless Tuesday in the New York Times newsroom, then on 43d street just off Times Square. I was a national education correspondent, getting ready to go to Pennsylvania to meet home-schoolers who were exploiting the state’s new charter-school rules to get public money. I was standing at a printer waiting for my pages of notes to come out when someone said, “You better get over to Metro. A second plane just hit the World Trade Center.” 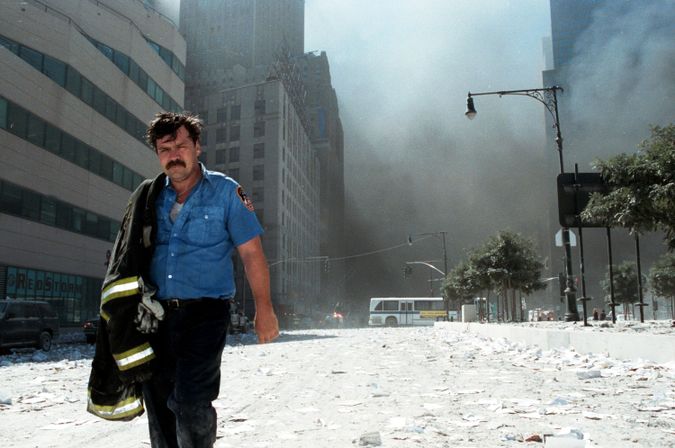 A New York City firefighter walks away from Ground Zero. Courtesy of Getty

I didn’t work for Metro, but of course that didn’t matter on that day. The editors there were dispatching any warm body with a notebook to anyplace they could think of. The core crew was of course at what would soon be called ground zero. I ended up with the odd assignment of checking out an art gallery that someone had heard had an exhibit with a live camera trained on Lower Manhattan; maybe that camera had unique footage? Maybe people would flock there to watch it.

Not so much. After an hour or so of nothing happening at the gallery, I called the desk and was rerouted to Chelsea Piers, where some doctors and nurses were said to be setting up a trauma center. Some of you already know, now, how this story ends, but bear with me. The middle is the powerful part. 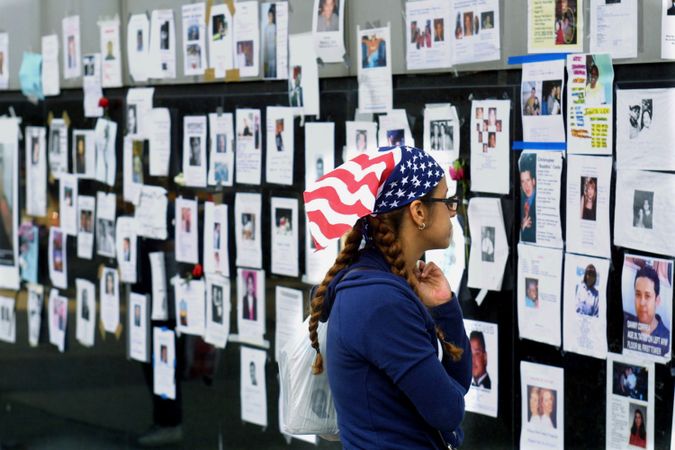 A woman looks at flyers posted at the University Medical Center on 1st Avenue seeking information on loved ones after the World Trade Center attacks. Courtesy of Getty

I arrived to find dozens of doctors and nurses using klieg lights and sets from old shows to create a makeshift emergency room. They hung IVs on coat racks, put file cabinets and desks together to make “beds,” and placed the syringes and other supplies ferried over from hospitals into paper cups at the ready.

They were not E.R. docs. Nor were they local: most had come from some kind of health-care conference uptown — I remember Minneapolis, St. Louis, Sacramento, Texas, even Hawaii. They didn’t know each other, but they spoke the same language — trauma. Some had not used it since school, but I think it’s a language you never forget, especially when the adrenaline kicks in.

They formed little teams, someone took charge. They made color-coded triage tags to hang on patients’ toes: green for stable, red for life-threatening, black for already gone. It was controlled chaos, and they were too focused to care if a reporter watched and listened. I filled pages with notes about who they were and what they were doing, complete with time-stamps. On a day of such despair, I would produce an amazing story of heroism, about people coming together to do what was needed, to do what they could. I called the desk in high journalistic excitement; I admit, I imagined it might make the front page.

Hours passed. More doctors came, but no patients. At 3:30 p.m., sandwiches showed up, but still no patients. It was 4 p.m., then 5. Doctors rested on the tables they’d set up, under the klieg lights that never got turned on. “I just hope there are people to see,” said Howard Katz, a surgeon who had hitched a ride there. Then he voiced what they all were afraid of: “We might not have anyone to work on.”

Yes, you know the ending. There were virtually no seriously injured people needing emergency care on 9/11. Nearly 3,000 were killed in the collapse of the World Trade Center. Those who escaped mostly were able to walk away. The makeshift trauma center never got any patients needing green, red or black toe tags. By 8:30 p.m., surgeons like Katz were urged to head to ground zero, in hopes of finding some survivors in the rubble. I filed my notes, which ended up at the bottom of a Dan Barry article on Page A9, and started the long walk home to 108th street and Amsterdam. 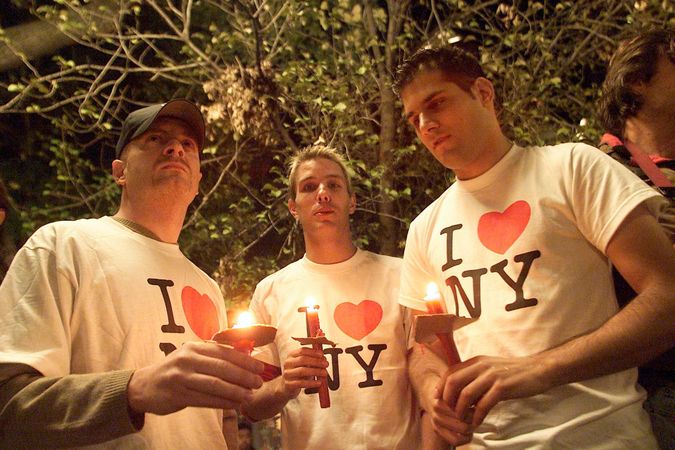 A candlelight vigil at Union Square.

I think about this story every year at this time, and every time I pass Chelsea Piers. I thought of it, too, earlier this summer, while reading “Counting by 7s,” a young-adult novel centered around a brilliant little girl whose adoptive parents are killed in a car crash. The book, by Holly Goldberg Sloan, is about how the girl’s radically under-qualified school counselor, an immigrant nail-salon owner and a cab driver come together to create for her a new family.

“I’ll be ready,” the protagonist says as the happy ending coheres. “I’m not sure for what exactly. But maybe that’s what being ready really means.”

None of us were ready for the previously unimaginable attacks on 9/11. Then our worlds changed, and we got ready for another mass terror attack on an iconic building, for more hijackings of civilian airplanes. Instead, we got the coronavirus pandemic. We got climate change, with its unimaginable heat waves and forest fires and a hurricane that flooded streets and basements in previously hurricane-spared sections of New Jersey. We got a Taliban takeover of Afghanistan.

One of my very favorite High Holiday traditions is borrowed from Rabbi Elliot Cosgrove. Years ago, when we were both at Congregation Anshe Emet in Chicago, Rabbi Cosgrove had his flock write our personal “sins” on little slips of paper. During Yom Kippur services, he’d read a few before each communal recitation of the viddui, or confessional prayer, the “Al Chayt.”

Instead of, “for the sins we committed by a gathering of lewdness” or “by impurity of speech,” we might talk about the sins we committed by looking at our phones during dinner or forgetting to thank the clerk at the convenience store. Last year, I asked readers to share their personal sins, and published some of the responses. Please use the blue button below to share whatever you’re repenting for this year, and include your name, age and hometown if you’re comfortable with us publishing those.

For the 20th anniversary of 9/11, we’ve published a number of compelling interviews and essays for you to savor. And after 9/11 comes Yom Kippur. Perfect reading material to prepare is Abigail Pogrebin’s series, “Still Small Voice,” in which she tackled 18 Jewish questions about God with 18 Jewish thinkers. You can download and print those interviews here or read them online.