Recall or not, Gavin Newsom needs to atone—and so do his critics 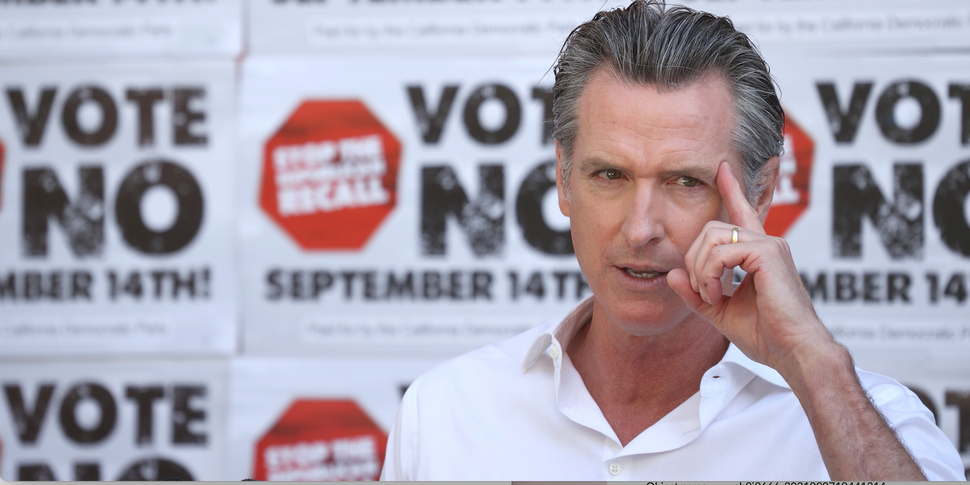 California Gov. Gavin Newsom speaks during a “Vote No” get out the vote tour campaign stop at Mission Language and Vocational School on September 07, 2021 in San Francisco, California. By Justin Sullivan/Getty Images

It’s a coincidence that the election to recall Gov. Gavin Newsom falls one day before the start of Yom Kippur, the Jewish holiday of atonement. But it may also be fortuitous. After a contest that has been alternately brutal and silly but always expensive, polls show that Newsom is likely to retain his seat.

After which he — and his opponents — should head straight to synagogue.

On the holiest of holy days, Jews are asked to make a heshbon nefesh, a soul-accounting, for their wrongdoings. Once the ballots are cast on Tuesday, it’s time for all sides to do just that.

Yom Kippur asks us to look back on the year and see where we have fallen short as human beings. I understand there may be little relationship between being a righteous person and a good politician. But a time of reflection is a terrible thing to waste. 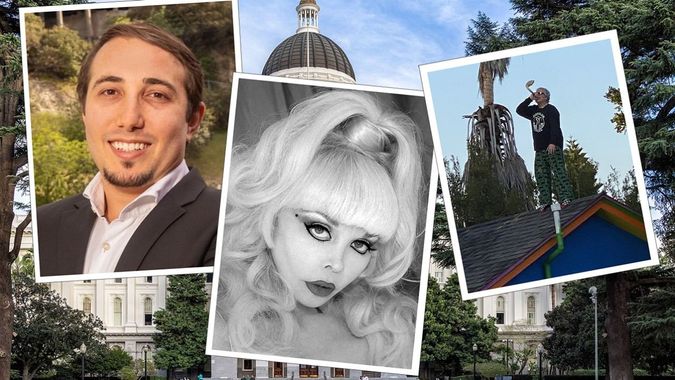 (From left) Leo Zacky, Angelyne and Dan Kapelovitz are among the dozens running to replace Gov. Gavin Newsom.

Newsom needs to reflect on how his actions, or lack of action, put his political career in so perilous a position. And the people who finally got the recall on the ballot after seven attempts need to ask themselves: Was it worth it?

Regardless of the outcome, Californians will wake up after the results are in and still be facing the same enormous problems we had when the recall campaign began Feb. 20, 2020.

•We will still have 150,000 unhoused people sleeping on our streets. In Venice, where I live, authorities finally in July found temporary housing vouchers for hundreds of souls sleeping on the famous boardwalk. But hundreds more are bedded down elsewhere in my neighborhood, and those vouchers expire soon.

•There will still be 1 in 6 Calfornians struggling to afford basic necessities. A decades-long housing shortage means rent and mortgage eat into the ability of 7.1 million Californians to put food on the table.

•Young people will still find it prohibitive to settle down here. The average home costs seven times the average household income, according to the CaMatters California Dream Project.

•Climate change and attendant drought and fires will still loom as existential threats to the state, whose energy and water policies, in turn, influence the entire country.

The enormity of these problems will quickly subsume the pettiness of the recall.

Newsom’s critics, who originally sought the governor’s ouster in reaction to what they considered California’s lax immigration policies and high taxes, just cost the public another $276 million to fund the recall. That’s not including the estimated $100 million Newsom and his opponents raised as of August.

For all that money, the pro-recall forces got a process that was part citizen’s revolt, and part just revolting. There was the poor brown bear that Republican candidate John Cox dragged along to his photo ops. There was the candidate better known for her breast implants than her tax policy, and there was lead Republican challenger, Larry Elder, who, given the weirdness of the recall process, could actually win despite holding Trump-like positions on climate change and systemic racism that a majority of California voters oppose.

Their outrage or opportunism put Newsom, a progressive who championed gay marriage, ended the death penalty and passed a record economic stimulus, in a political fight for survival. Should he narrowly win he will no doubt change too much, and if he comfortably wins, he may not change enough. The right response is somewhere in between.

Here’s what Newsom should atone for: First, stupid stuff, like dining out during the pandemic after telling everyone else to stay in.

Second, weak outreach to the constituencies that actually like him, including young people and Latinos. “They are tired of hearing the Republicans are evil, the Republicans are out to get you,” Gustavo Arellano, a Los Angeles Times columnist, told FoxLA. “He needs to be offering Latinos hope.”

Third, California’s broken Economic Development Department, whose dysfunction exacerbates hardship and inequality. Newsom, wrote Dan Waters in CalMatters, needs “ to issue a personal apology to hundreds of thousands of Californians who remain mired in the managerial meltdown” at the department. 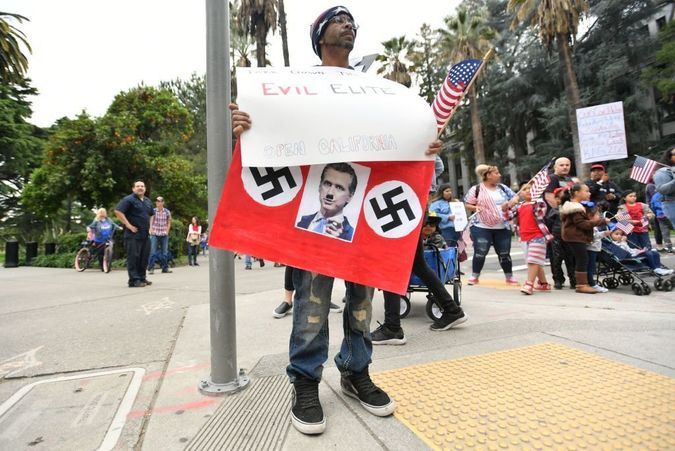 A man displays a sign depicting California Governor Gavin Newsom as a Nazi as hundreds of people gather to protest the lockdown in spite of shelter-in-place rules still being in effect at California’s state capitol building in Sacramento, California on April 20, 2020. Image by JOSH EDELSON/AFP via Getty Images

Dan Schnur, a former Republican political strategist, said the recall was happening too soon after President Donald Trump for that kind of party to emerge, but that it could happen in the next (real) election cycle.

A second atonement: Not thinking hard enough before playing the recall card. Beyond the issue of fiscal responsibility, the recall has been twisted into a tool that undermines democracy, with the possibility that Californians could elect a new governor with well under two million votes, while Newsom garnered 7.7 million votes in the regular 2018 election.

And finally there’s this atonement recall proponents should undertake: Pointing the finger solely at Newsom for California’s problems, without taking a look at themselves. The real momentum against Newsom began after the drastic steps he took to combat the COVID-19 epidemic mask mandates, lockdowns, school closures, vaccine campaigns. These steps have made California safer, according to 61% of residents.

“The people who really need to atone are the people who are filling up hospitals so people can’t get the life-saving surgeries they need,” one Newsom supporter said when I asked on Monday what the governor should repent for.

That’s where the ugly, expensive recall campaign has left our state. Just as divided, angry and beset by problems that only a change of course, if not a change of heart, can solve. The state didn’t need a recall, but it could really use Yom Kippur.

Recall or not, Gavin Newsom needs to atone—and so do his critics