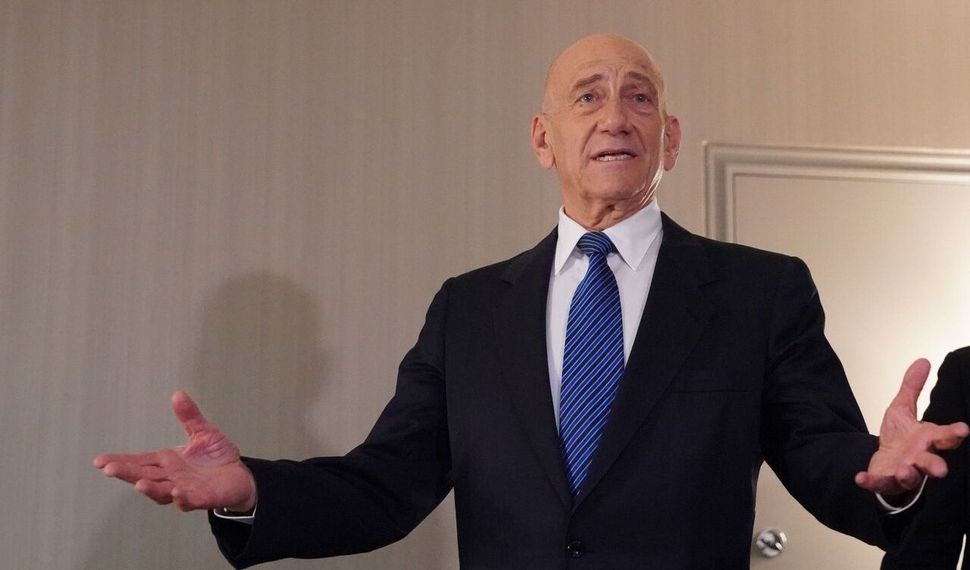 Ehud Olmert was one of Israel’s shortest-serving prime ministers, in office just over three years — and is the only one (so far) who has been convicted of a crime, serving 16 months in prison for bribery and obstruction of justice.

Now 75, Olmert remains fully engaged in his country’s rough-and-tumble politics, as one of the harshest critics of former Prime Minister Benyamin Netanyahu. In an hourlong interview last month in his Tel Aviv office, Olmert took partial credit for Netanyahu’s ouster, offered his early assessment of now-Prime Minister Naftali Bennett’s “change government” and President Biden’s Middle East policies, attempted some revisionist history on his own legacy and shared thoughts on the Iran nuclear deal and the U.S.-Israel alliance.

He sharply denounced Netanyahu’s claim, in his first speech as opposition leader, that the Iranian regime was “rejoicing” about his dethronement because of his tough stance against Tehran. “There was only one place where there was rejoicing — in Jerusalem,” Olmert quipped.

He also shared some personal reflections on his close relationship with former President George W. Bush.

“This is a picture of two friends, not two leaders,” Olmert remarked about the photo on the wall of his private office in which the two men are shown walking in the Rose Garden, Olmert’s left arm around Bush’s neck, the president smiling and holding both hands in his pockets. A second photo shows the the two leaders standing back-to-back at the prime minister’s residence in Jerusalem in 2008. “We were teasing each other who is taller,” Olmert recounted.

Excerpts of our conversation are below.

On Netanyahu’s demise — and Bennett’s rise

Olmert predicted back in 2019 that Netanyahu’s time was over when he failed to garner a majority in the first of the past four election cycles. He credited himself as “another voice” in the effort to oust him, and noted that before Bennett, he dealt Netanyahu “perhaps the most painful defeat he ever experienced in his life,” back in 2006. Of course three years later, Netanyahu replaced Olmert, and eventually became Israel’s longest-serving premier.

“Now it’s only a matter of time until he retires,” Olmert said of his political nemesis. “Disappear from the public eye,” was his advice to Netanyahu. “He is home — where he should stay, dealing with his legal problems.”

As the new government heads towards the hundred-day mark, Olmert gave it a positive grade for its performance so far, but said it is still early to judge whether Bennett, a former settler leader with hard-right positions on Israel’s conflict with the Palestinians, will be able to hold together a coalition that agrees on little other than opposition to Netanyahu.

“He definitely sounds very cool-headed and practical,” he said. “I think that in terms of the actual operation of government agencies, Bennett shows a certain ability that was totally lacking in the former government.”

On the U.S.-Israel alliance

Olmert said he has no doubt that the countries’ relationship has already improved because of the departures of Netanyahu and President Donald Trump.

“The Israeli government is not provocative against America as the former government may have been vis-à-vis Joe Biden, and as opposed to it was vis-à-vis Barack Obama,” he said. “And therefore I think that there will be a considerable degree of cooperation.

“At a time when Donald Trump didn’t even know Israel was on the map, Biden was already one of the staunchest supporters of Israel in the American political scene.”

He said “there is a lot of room for cooperation” as Washington works to revive the 2015 nuclear deal with Iran that Trump cancelled, and praised Biden handling of the issue, “just doing what needs to be done, without fanfare and without trumpets.”

Looking back: A race for peace

Reflecting on how his indictment and resignation in 2009 stalled peace talks with President Mahmoud Abbas of the Palestinian Authority, Olmert said the legacy of his government should be that failure — rather than its successful strike on the Syrian nuclear reactor and prosecution of the 2006 war against Hezbollah in Lebanon. (He described that war as “a historic achievement,” despite a scathing report that roiled his government at the time.

“The fact that we were so close to signing an agreement, I think, is a reminder to everyone that it is not impossible,” Olmert said. Researchers still reach out to hear about his proposal, Olmert added, suggesting that the option of two states “is still alive in the minds of people based on what has been achieved and what has been proposed by us.”

Olmert praised Trump’s recognition of Jerusalem as Israel’s capital and the relocation of the U.S. embassy from Tel Aviv to Jerusalem in 2017 as something that was long due. But he also said it should not be misconstrued to mean the future of the holy city is settled.

“Even Trump, who was not the most sensitive person about the different aspects, understood that Israel wouldn’t benefit from including 300,000 Palestinians into the State of Israel,” he said, referring to residents of East Jerusalem’s Arab neighborhoods. “Did we ever pray for Beit Hanina, Jabel Mukaber and Shu’afat 2,000 years ago, when we prayed for the return to Zion?”

Last year, Olmert and Abbas jointly denounced Trump’s peace plan in New York. He said Trump’s team never reached out to him to talk about his proposal, and that he nevertheless advised Abbas not to reject it, but instead to use its mention of the principles of two states to push Netanyahu to resume talks on that basis.

And no, he does not think a Palestinian state inherently threatens Israel’s security.

“I can tell you as someone that was at the top of the helm, making decisions about Israeli security: no one can come close to the strength and the power that Israel possesses,” he said. “We are in a position now that perhaps we never were, where we can make concessions that will not expose Israel to any existential dangers.”

On close relationship with Bush

In one of their phone calls in 2008, Olmert recalled, Bush gleefully informed him that his daughter Jenna was getting married. “It doesn’t usually happen with a foreign leader, especially the president of the U.S.,” he said. “But we were kind of close. We talked about our families and our children.”

Olmert and the 43rd president still communicate “every now and then,” he said.

“He was very helpful to me and very supportive on many different issues, most of which are not known and will not be known for obvious reasons. I always felt that he did not receive the warmth from the Jewish community in America for what he did and manifested towards the State of Israel.”