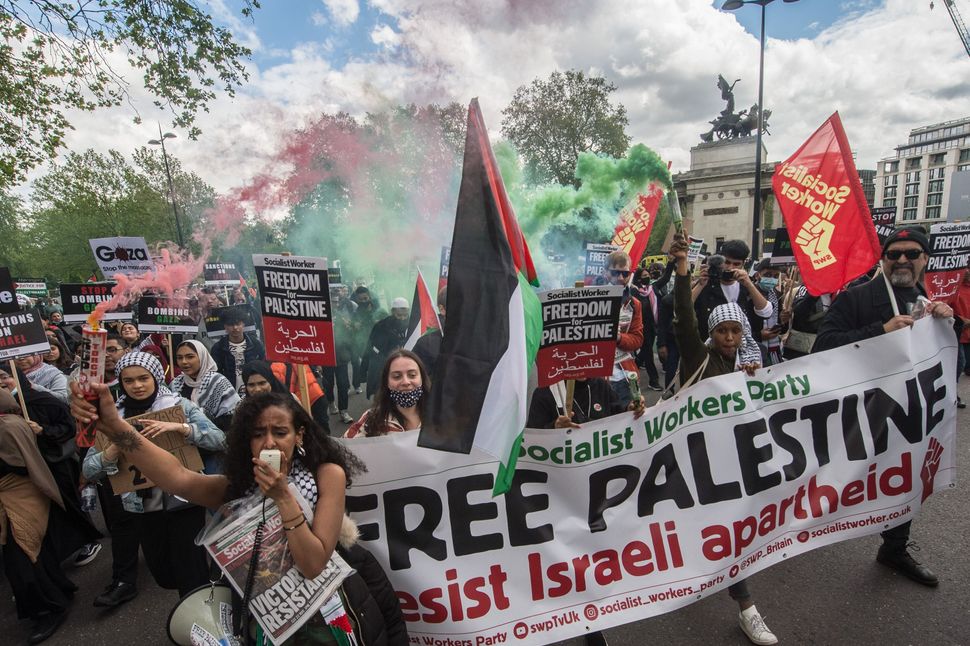 LONDON, ENGLAND – MAY 22: A huge demonstration of tens of thousands of people marches from the Embankment to Hyde park in solidarity with the Palestinian people on May 22, 2021 in London, England. Rallies in support of the Palestinian people have taken place across the globe during the recent eleven days of conflict between Israel and Palestine. Egypt brokered a ceasefire between Israel and the two main Palestinian armed groups in Gaza. (Photo by Guy Smallman/Getty Images) Photo by Getty Images

Middle Eastern Studies scholars in the United States overwhelmingly view Israel’s control over the West Bank and Gaza as similar to apartheid,” according to a poll conducted this month.

The survey found that 65% of professors and researchers studying the region believe this, while 80% say it will reach that point in the next ten years barring progress on a two-state solution. Those percentages are up since the last time this group of academics was polled in February, when 59% said the situation was akin to apartheid and 77% said it would become so in the near future.

Marc Lynch and Shibley Talhami, professors at George Washington University and the University of Maryland, respectively, oversaw the poll and said that the increasingly negative view of Israel was likely influenced by events in Jerusalem and Gaza last spring.

Several significant human rights organizations, including the Israeli groups B’Tselem and Yesh Din, as well as Human Rights Watch, have come out with reports accusing Israel of apartheid — political discrimination on a racial basis — in the last 18 months.

Those claims have been met with indignation by the Israeli government and the American Jewish establishment, which tend to see them as proof of bias and double standard being applied to Israel. But proponents of the apartheid label, which has long been used by pro-Palestinian activists, argue that it accurately describes a dynamic in the occupied West Bank where, for more than five decades, Jewish settlers have enjoyed full civil and political rights denied to Palestinians living in the same area.

There is some evidence that American Jews are increasingly sympathetic to the argument that Israel is guilty of apartheid. In a July poll, 25% of American Jewish voters said they believed Israel was “an apartheid state,” with another 22% saying they were unsure.

The Middle Eastern studies scholars polled in this more recent survey had a generally dim view of the current state of the Israeli-Palestinian conflict. While 43% said a two-state solution was still possible, only 3% believed it was “probable” within the next ten years and 57% said it was no longer possible at all.

Seventy-two percent said the Abraham Accords between Israel and several Arab states had hurt prospects for peace with the Palestinians, although 26% said they had advanced regional stability and 41% believed they had helped U.S. interests.

A possible American return to the nuclear deal with Iran received favorable marks from the group of academics, with 69% saying restoring the agreement would reduce the likelihood of Iran developing nuclear weapons and 65% stating that an immediate return would be “most likely to produce results favorable to U.S. interests.”

The poll, known as the Middle East Scholar Barometer, is a joint project of the University of Maryland and George Washington University. It surveyed 557 members of several major academic associations whose members study the Middle East.

In addition to questions about Israel and Iran, the survey also asked about political turmoil in Tunisia, the American withdrawal from Afghanistan.