What if a quarter of Jews really do think Israel is a genocidal, apartheid state? 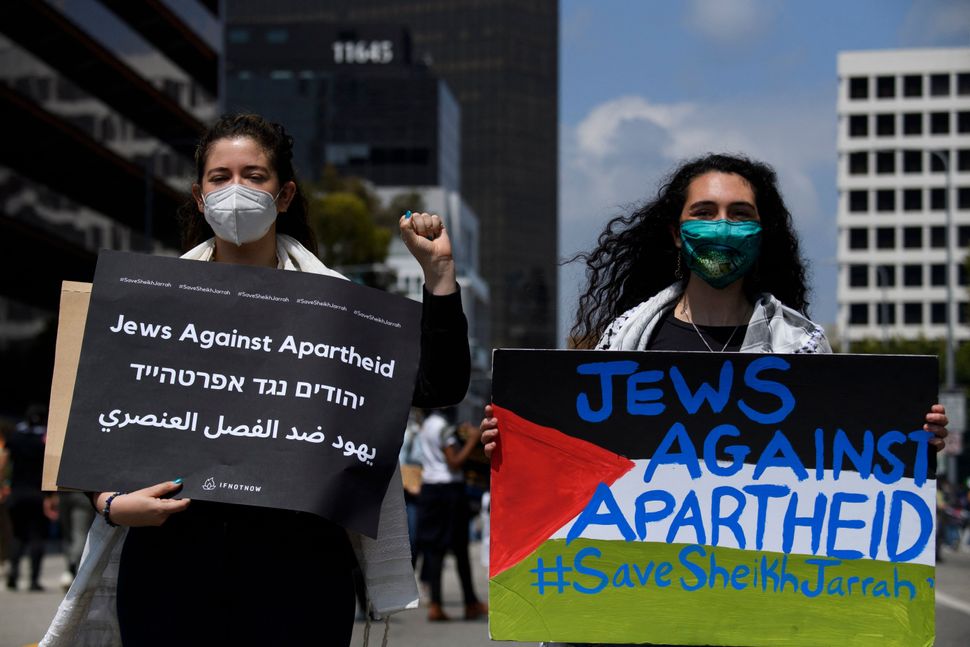 The questions were tucked toward the end of a lengthy poll of American Jewish voters: do you agree, the Jewish Electorate Institute asked respondents, “that Israel is an apartheid state?” Do you agree that “Israel is committing genocide against the Palestinians?’’

Released Tuesday, the poll appears to be the first time Jews in the United States were asked those questions as part of a formal survey — and the results were shocking to many: 25% agreed that Israel was an apartheid state, while another 22% were unsure. Twenty-two percent agreed that Israel was committing genocide.

But while more positive views of Israel prevailed among respondents — a slim majority of 52% disagreed that Israel was an apartheid state and a more solid 62% rejected the claim of genocide — the findings nonetheless raised eyebrows at a time when activists and politicians are accused of antisemitism for voicing similar criticism.

“The data shows what we’ve known for years and what the Jewish right — and even Jewish communal organizations — have tried to hide: there is an enormous range of opinion on Israel among American Jews,” said Barry Trachtenberg, a Jewish studies professor at Wake Forest University.

If the data are solid, and future surveys produce similar findings, mainstream Jewish institutions are facing a jarring reality: their constituency includes a significant minority that does not share the the establishment’s views on Israel — or at least holds far more nuanced views than have long been assumed. The data also raises questions about whether Israel is more of a unifying or divisive force within American Jewry, and the extent to which educational and other programming to strengthen ties to Israel has fallen short.

For many Jews who care deeply about Israel, the Institute’s poll shocked and dismayed, as if a cherished relative had been vilified by other members of the family.

“I’m just speechless and horrified,” said Susannah Heschel, Dartmouth professor and longtime observer of the Jewish community. “It breaks my heart and it comes like a tornado hitting me in the face.”

But not everyone is assuming that the survey by the Institute, which is affiliated with the Jewish Democratic Council of America, accurately reflects American Jewish opinion on Israel.

Some have assailed the survey itself, pointing out that the description of its methodology was not detailed enough to allow others to replicate it. The data came from 800 self-identified Jews found through a commercial database of registered voters, refined by both geography and using a list of common Jewish names. Polling firm GBAO, which conducted the study, then weighted the pool to match the Pew Research Center’s recent findings on denomination, synagogue attendance and other metrics.

None of that is unusual for a relatively inexpensive poll conducted by a nonprofit looking to glean some interesting data and win press coverage. And the bulk of the survey tracked with the Pew’s Research Center’s polls of Americans Jews, released in 2013 and in May — and considered the gold standard for Jewish communal research — and other frequent polls of Jewish adults. The institute found a roughly 70% to 30% split between liberals and conservatives and a large majority reporting both an emotional attachment to Israel alongside criticism of various Israeli government policies.

“The results are what they are,” said Jim Gerstein, who oversaw the poll for GBAO and has worked extensively for Democratic and progressive causes. “Jews are attached to Israel, it’s important to them, and they also have no problem with criticism of it.”

That nuanced view of Israel was reflected in the data, with 19% of those who said they were “emotionally attached to Israel” agreeing that it is an apartheid state and 16% saying that Israel is committing genocide against Palestinians, according to an analysis provided to the Forward by Gerstein. And the vast majority of Jews who did not report an emotional attachment to Israel still rejected some negative viewpoints on Israel. A slim 8% of those Jews agreed with the statement “Israel doesn’t have the right to exist,” while 54% agreed that such a statement was antisemitic.

Matt Boxer, who studies Jewish communities at Brandeis University, said he initially viewed the results as unreliable. But after more details on how survey was conducted were released after the initial Tuesday announcement, Boxer said he was more confident in its findings and said the poll may have actually underestimated the proportion of American Jews who hold critical views of Israel because it undercounted “Jews of no religion,” those who identify as either atheist or agnostic and also as Jewish and tend to be less attached to Israel.

“Had this information been available [earlier], the discussion among researchers like my colleagues and I might have been over whether, for instance, the apartheid measure was really 25% or closer to 30%,” Boxer said in an email, “rather than being so focused on how we don’t know enough about where the data came from and so can’t evaluate whether the findings are reliable.”

Gerstein said the questions about apartheid and genocide were included in the survey to better gauge Jewish opinions about Israel. Roughly an equal number of respondents — 24% — said that accusing Israel of apartheid is antisemitic as the 25% who said the statement was true. On the genocide question, 31% said it was antisemitic to charge Israel with committing genocide compared to the 22% who agreed that Israel was guilty of it. The margin of error for those questions was plus or minus 4.9 percentage points.

Such mixed opinions on Israel may complicate the Jewish establishment’s approach to both those within outside the community, including its recent push for governments and organizations to adopt a definition of antisemitism that holds that accusing Israel of being a “racist endeavor” and “drawing comparisons of contemporary Israeli policy to that of the Nazis” are both examples of anti-Jewish bigotry.

David Harris, chief executive of the American Jewish Committee, which has pushed hard for the so-called IHRA definition that limits criticism of Israel, said in a statement to the Forward that the poll pointed to “shortcomings in quality education and widespread inaccuracies on social media.”

“Clearly, greater efforts at educating American Jews, especially younger cohorts, about all aspects of Israeli society, and connecting them with their counterparts in Israel, are critical for ensuring nuanced understanding about Israel and strengthening Israel-Diaspora relations,” Harris said.

Younger Jews were especially likely to agree with negative statements about Israel, with 38% of those under 40 agreeing that Israel is an apartheid state and 33% saying it was committing genocide, compared to 13% and 15%, respectively, of those over 64 who said the same.

Sam Eilertsen, who is making a documentary about the relationship between young Jews and Israel, said he interviewed many Jews who said they were taught very little about the Israeli-Palestinian conflict and were quickly swayed after being exposed to the Palestinian experience in college.

“A lot of people come to college with a very simplistic perspective on the conflict,” Eilersten said, “and when they try to figure out the truth they tend to end up with much more pro-Palestinian views.”

“It suggests that young American Jews are much further left than any one of us thought was possible,” Kaplan said.

It is difficult to determine whether the May violence in Israel and Gaza, or recent reports from Israeli NGOs and Human Rights Watch accusing Israel of apartheid, changed American Jewish perceptions of the Jewish state’s culpability. Experts in the field were not familiar with any other poll that has asked similar questions about apartheid and genocide and Boxer, the Brandeis professor, said Jewish organizations were often reluctant to broach the topic in surveys.

“There are some groups I’ve worked with that want to limit the questions about Israel as much as possible because it’s a hot button issue,” Boxer said. “People get up in arms no matter what the numbers come out.”

Beyond the distress Tuesday’s survey release caused in the Jewish community and the questioning of its methodology came disagreements over who or what was to blame if the numbers were accurate.

Heschel, chair of the Jewish studies department at Dartmouth, blamed a combination of former Israeli Prime Minister Benjamin Netanyahu’s embrace of the Republican Party and a failure of the American Jewish community to confront Israel’s most controversial actions.

“Young people come and say, ‘Why expel people from Sheikh Jarrah? Why? Why expel Palestinians? Why can’t they live there?,’” Heschel said, referring to the Jerusalem neighborhood that has been at the center of recent conflict between Palestinians and Israeli settlers. “How do we respond to that?”

What if a quarter of Jews really do think Israel is a genocidal, apartheid state?