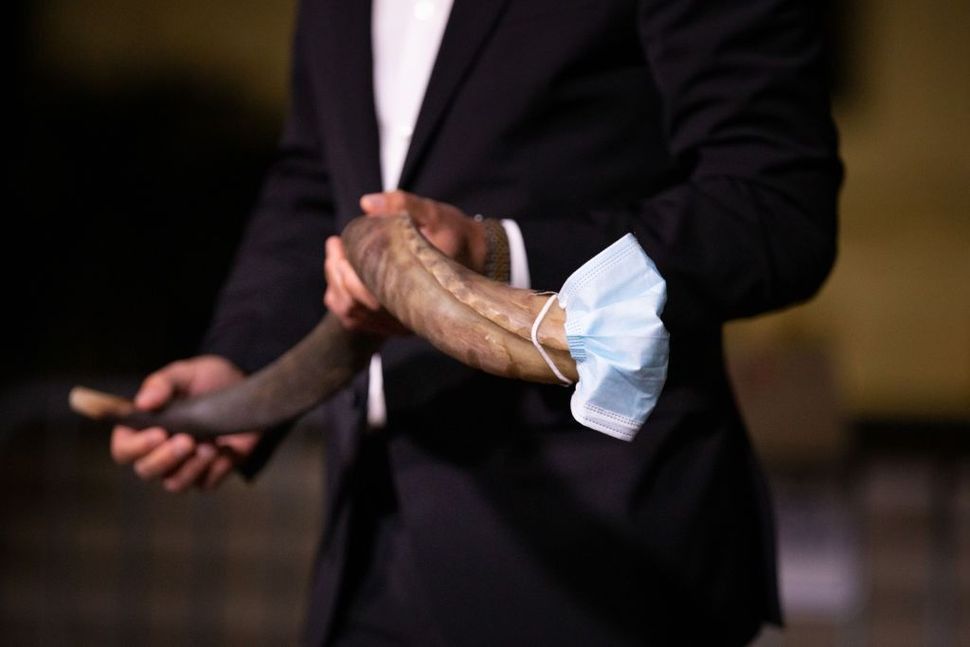 Putting a mask over the end of a shofar prevents the spread of COVID-19. Photo by Amanda Andrade-Rhoades/Bloomberg via Getty Images

Rabbi Jason Weiner, the senior rabbi at Cedars Sinai Medical Center, found himself on the front lines of the COVID-19 surge in Los Angeles in January. He still remembers the pain he felt when praying in the hospital rooms of those who had died from COVID, as body bags piled up in the hospital morgue.

While experiencing that devastation, Weiner continued to serve as a rabbi at Knesset Israel, a local Orthodox congregation. Juggling these two roles — one involving exposure to immense trauma, the other requiring him to support his congregation by delivering weekly sermons meant to instill hope — took its toll.

“I was trying to be uplifting and positive. But at the same time, I was seeing so many dead bodies, and suffering, and family members crying,” Wiener said. “As a rabbi and clergy, you see horrible things, and it’s inside of you and it stays there. If you don’t talk about it, it makes it even more difficult.” 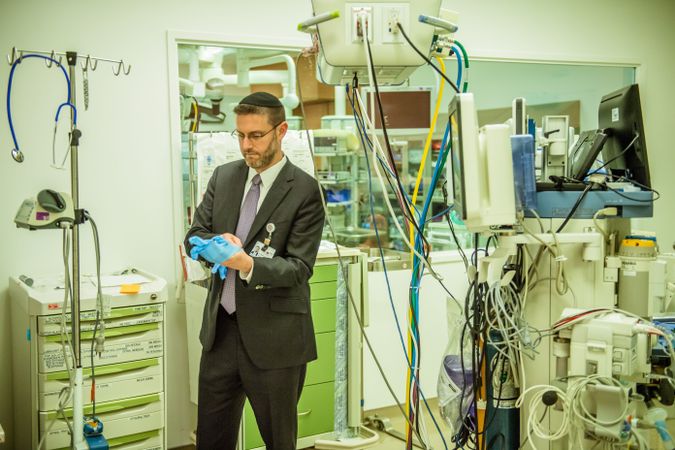 Wiener is far from alone in struggling with the emotional and spiritual burden of the last year. Rabbis and cantors, whose jobs involve supporting congregants in times of despair, have reported heightened strain on their mental health since the start of the COVID-19 pandemic. In this new phase, as vaccine hesitancy and variants force clergy to make contentious decisions about vaccine requirements and mask mandates, they’re facing new backlash — and with it, new sources of stress.

The “flood of grief and bereavement” that rabbis face in typical times has intensified during the pandemic, said Rabbi Adir Posy, director of the Orthodox Union’s Synagogue Initiative. Even as pandemic restrictions have eased up, clergy members are grappling not just with the stress of supporting their communities through loss for months on end, but also with that of navigating rapidly changing public health measures.

Posy, who is also the associate rabbi at Beth Jacob in Los Angeles, said he personally has struggled with maintaining an inclusive community while prioritizing public health in this most recent stage of the pandemic. Considering imposing vaccine requirements, in particular, “was challenging because it made us feel like our goal of being as welcoming of a congregation as we wanted to be ended up being stymied,” he said. Posy has been involved in setting up vaccine drives, and his congregation now mandates vaccines for many in-person events.

For many clergy, challenges posed by the question of vaccine requirements came to a head last month with the High Holidays. Rabbi Benny Berlin of the Orthodox BACH Jewish Center in Long Beach, New York said that his congregation has not issued a vaccine mandate, which made Yom Kippur — a holiday that draws in larger crowds than usual, including, this year, many guests whose vaccination status was unknown — particularly stressful for synagogue leadership.

With safety in mind, Berlin’s congregation decided to hold Kol Nidre services outdoors, which was a challenge psychologically for some members of the congregation. “I think it’s difficult for people to accept that we’re still not done,” Berlin said.

Berlin and others are emphasizing the stress of prioritizing safety while ensuring a meaningful spiritual experience.

“It does create a special type of stress, and is one space where you really have to care for yourself before you go out and care for others,” said Rabbi Jacob Blumenthal, CEO of the Rabbinical Assembly, the international association of Conservative rabbis. 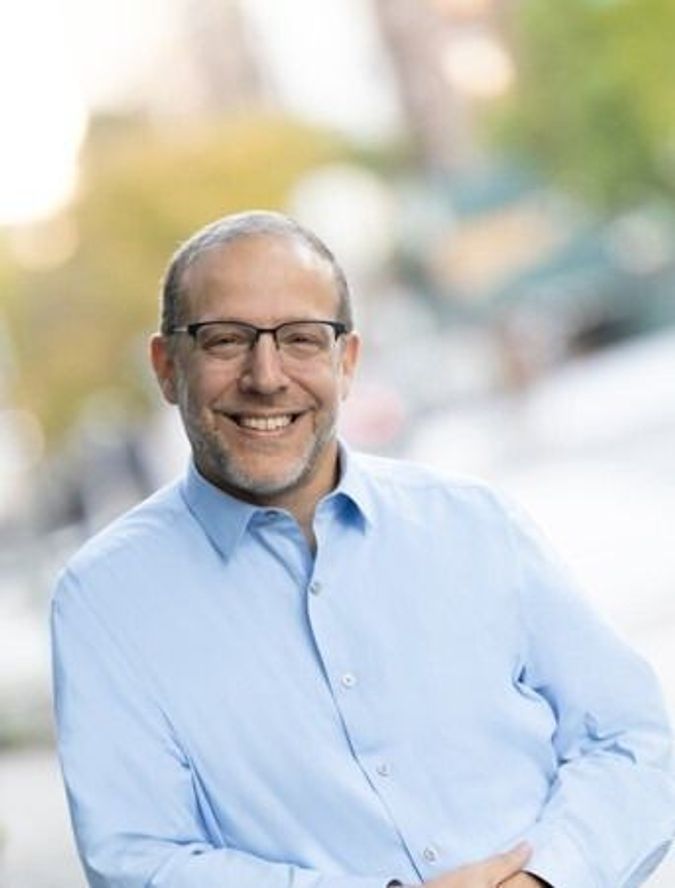 Many rabbis, Blumenthal said, are performing two or three times the number of funerals they would in a normal year. “I’ve had many conversations with rabbis where I hear them struggling — struggling to balance their personal situation with their responsibilities to the community, struggling to meet the needs of their congregation through new technology, struggling to make decisions quickly enough to be able to respond, and then struggling again when those decisions have to change.”

In response, he said, the Rabbinical Assembly began to offer new mental health resources during the pandemic, including workshops for rabbis to meditate, sing and pray in community. These workshops are ongoing; this month, the association organized two days of online programming on self care — including meditation, group singing, art and writing workshops. The association has also received grants to make other forms of self care available to rabbis, such as meetings with a social worker or psychologist.

Cantor Claire Franco, a congregational cantor in New York and the president of the American Conference of Cantors, or ACC, said that cantors have faced a unique additional challenge since the start of the pandemic: singing — the core of their jobs — became dangerous. Cantors have been forced to navigate safety precautions each day and produce high quality sound via Zoom. And in the recent stage of the pandemic, burnout from months of exhaustion has taken its toll.

“It was overwhelming — the responsibility I felt and the lack of connection with my people,” Franco said, adding that the “tremendous toll” has made her question, at times, whether she even wanted to remain in her job.

Mental health workshops organized by the ACC, Franco said, have offered both practical safety information and emotional support for cantors during the past 18 months.

For Berlin, being a rabbi in a pandemic has been “a 24/7 job.” The heightened emotional burden on rabbis, he said, has extended far beyond leading Jewish rituals for those who died during the pandemic.

One part of it: Handling an increase in mental health concerns within their communities. Isolation and various forms of loss have caused new challenges for congregants, meaning that at the same time rabbis have been balancing their own new needs, they have also been tasked with supporting an increasingly high number of congregants requesting emotional and spiritual support.

OK Clarity, an online mental health platform for the Jewish community, has seen a notable increase in engagement with its anonymous mental health forums and social media. Fay Brezel, the organization’s CEO, said that engagement with the OK Clarity WhatsApp rose from about 200 people before the pandemic to more than 3,000 today.

But while organizations like the Rabbinical Assembly and OK Clarity have made some resources available to rabbis experiencing stress, emotional fatigue and more, the rabbis we spoke to say much remains to be done.

Weiner noted that weekly Zoom meetings organized by the Board of Rabbis of Southern California have served as “a chance for colleagues to be open and vulnerable with each other.” Hearing the challenges other rabbis have been facing, Weiner said, helped him feel validated in his own struggles. But, he said, not every rabbi is a member of a rabbinical organization that provides this type of support, which means many face barriers to access.

Amy Asin, Vice President of Strengthening Congregations at the Union for Reform Judaism, said she would not be surprised if some clergy take leaves of absence in the near future due to pandemic fatigue. “Our clergy and our synagogue professionals are spent. They are exhausted — and we need to give them a break,” Asin said. “They have held so much for us over the last 18 months.”

“For any position, especially one where you’re doing community work, you can give more when you’re taking care of yourself,” Rabbi Berlin said. “If you’ve depleted yourself, you’re at a point where you have nothing to share.”