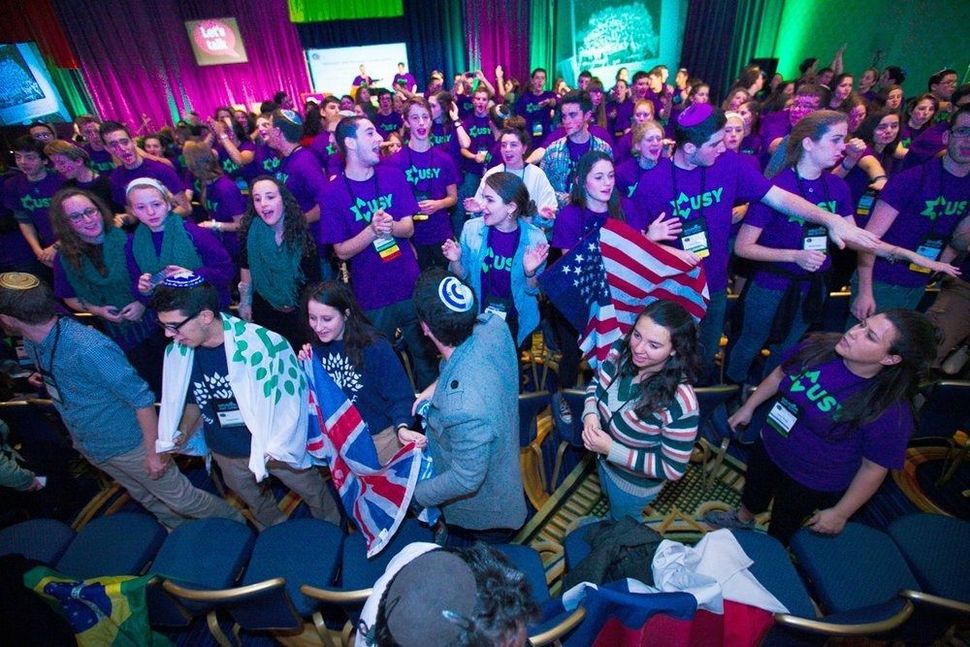 The mandate from the headquarters of Conservative Judaism’s youth movement is clear: the unvaccinated can’t participate in national and regional events. But that requirement conflicts with anti-mandate laws of a dozen states, including Florida, Texas and Georgia.

The result for hundreds of United Synagogue Youth staff and teens caught in the middle ranges from confusion to cancelled events, including a mini-golf Sunday in Coral Springs Florida for which 47 young people had signed up.

“This is not a political issue, this is an issue of just wanting Jewish children to get together with other Jewish children,” said Scott Daub, president of B’nai Aviv in Weston, Fla., a congregation with about 130 USY members. “We had a parent or two who said they would not vaccinate their child and nobody can make them because of the laws in Florida. I don’t think I am allowed to even ask if a child is vaccinated.”

Safe without the vaccine?

Some of those frustrated with the dilemma have directed their anger at USY’s New York based leadership. “This decision means that our synagogue will have to continue paying dues and get nothing for it,” said a Florida rabbi who said he wanted to remain anonymous so that he could work more effectively behind the scenes to solve the problem.

He said he and other synagogue leaders in Florida are looking for a compromise, perhaps COVID-19 testing, that would allow their children to participate in regional events.

But at least one affected community, North Miami Beach’s Beth Torah Benny Rok Campus, issued a statement supporting the national vaccine requirement, and cancelled an event at its site scheduled for Sunday involving 14 teens. We “recognized that this was a measure to keep our community safe and appreciate this commitment to Pikuach Nefesh,” its leaders wrote, referring to the idea that the preservation of human life takes precedence over virtually all other Jewish values.

Julie Marder, director of teen engagement for USY, which counts about 10,000 members, said that its decision to require vaccination was guided by its medical committee of four doctors — including an epidemiologist — and a nurse.

“At this moment for the movement, this is where we stand. Only vaccinated kids who are eligible for the vaccine are permitted at [regional] events, which must be held outdoors, with masks, spacing, and food that is served only by those who are masked and wearing gloves,” she said.

Rabbi Jacob Blumenthal, CEO of United Synagogue of Conservative Judaism, said USY was right to act cautiously in mandating vaccines. “If I needed to choose between a disappointed congregation leadership and having to speak with even one parent of a child who was seriously ill, or God forbid worse, with COVID, I would rather manage the frustration of our congregations.”

Marder said she understands the difficult position the national mandate poses for USY chapters in states where politicians have decided to make them unlawful. She said the group’s medical committee will meet Sunday “to determine if there are any changes that should be made to our policy.”

Rabbis in the southeastern region of USY are also planning to meet online soon to discuss the issue.

Rabbi Ed Farber, rabbi emeritus of Beth Torah Benny Rok Campus, said he wants to see if USY’s national office will reconsider its mandate and find a safe resolution that keeps everyone within the law.

According to USY, the conflict has so far resulted in the cancellation of three of its events, all of them in Florida and most of them with a small number of registrants.

Daub, the president of B’nai Aviv in Weston, Fla., said he believes some synagogue USY chapters will attend regional events in defiance of the USY mandate, and that others will stay away because “they don’t want to argue with the rules.”

The Reform movement does not have a national policy on vaccination for its youth programs, said Union For Reform Judaism spokesperson Laura Frank. “We continue to work with our URJ medical advisory committee and with local and state jurisdictions to determine the nature of our in-person programming”

In Orthodox Judaism, NCSY, formerly known as the National Conference of Synagogue Youth, does not require vaccinations to participate in its programs for its participants. Under the Orthodox Union, the group includes 28,000 members.

Rabbi Micah Greenland, the Orthodox youth movement’s international director, said it tried to prioritize safety and make sure it continues to run programs “that have an enormous emotional, educational, spiritual and psychological benefit to the teens and the community.”

“We insist that anybody not vaccinated must wear a mask,” Greenland said. “For overnight events, we require PCR testing of all participants and staff.”