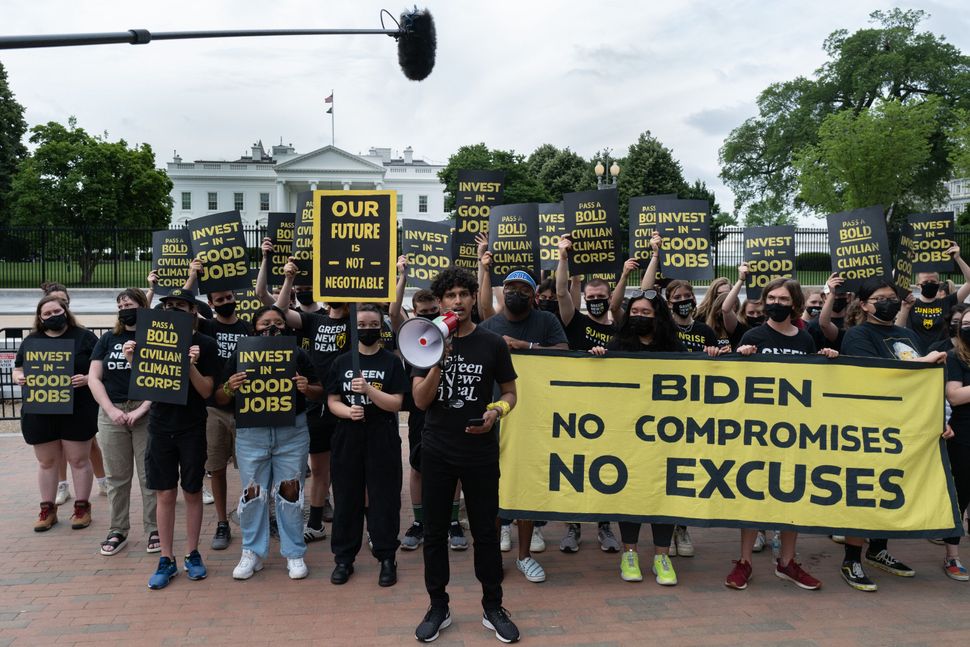 Members of the Sunrise Movement hold signs during a protest near the White House in Washington, D.C., U.S., on Friday, June 4, 2021. President Biden has pitched to Republicans the idea of a 15% minimum tax on U.S. corporations, along with strengthened IRS enforcement efforts, as a way to fund a bipartisan infrastructure package. Photographer: Shuran Huang/Bloomberg via Getty Images Photo by Getty Images

The Sunrise Movement called its D.C. chapter’s boycott of three Jewish, Zionist organizations “antisemitic and unacceptable” in a statement Friday. Those comments came after the national organization’s previous comments on the local boycott were assailed as insufficient by the Jewish groups involved.

“Sunrise DC’s statement and actions are not in line with our values,” the Sunrise Movement said on Twitter. “Singling out Jewish organizations for removal from a coalition, despite others holding similar views, is antisemitic and unacceptable.”

The condemnation was quickly welcomed by the three organizations targeted by the boycott. Sheila Katz, chief executive of the National Council of Jewish Women, said she had met with the Sunrise Movement’s leadership Friday.

“It was a very productive dialogue and it resulted in an amended statement naming what happened as antisemitic,” Katz said.

Sunrise decided to more forcefully condemn the boycott after speaking with several progressive Jewish leaders Thursday and Friday, according to several people familiar with the process.

The controversy began when Sunrise DC announced on Tuesday that it had declined a speaking role at a voting rights rally planned for Saturday over the inclusion of three Jewish organizations with ties to Israel: The Religious Action Center of Reform Judaism, the Jewish Council on Public Affairs and the National Council of Jewish Women — three liberal members of the Jewish establishment which primarily focus on domestic politics.

On Thursday, the Sunrise Movement released a statement saying that it had not reviewed the D.C. chapter’s announcement and that it rejected “antisemitism and anti-Palestinian racism” and was willing to work with “anyone who acts on our principles,” including support for Palestinian rights.

But it did not explicitly disagree with the boycott of the three Jewish organizations. The Religious Action Center reacted with anger on social media, calling the Sunrise Movement’s statement “tepid” and “shameful.”

While the progressive movement is careful to emphasize that criticizing Israel and Zionism is not inherently antisemitic, many Sunrise DC critics on the left took issue with the fact that Sunrise DC appeared to only be boycotting Jewish groups with ties to Israel while ignoring other liberal rally sponsors with friendly ties to the country.

“Singling out explicitly Jewish organizations despite non-Jewish organizations in the coalition holding similar stances on Israel is unquestionably antisemitic and has no place in our movement,” Sunrise’s chapter at George Washington University said Thursday.

Some were dissatisfied with the implication from both Sunrise GW and the national movement that a boycott of all Zionist groups — as opposed to only the Jewish, Zionist organizations — would have been acceptable. Katz, with NCJW said that more education needed to be done around the relationship between anti-Zionism and antisemitism but that her priority was ensuring that Jews were not subject to a higher standard than other members of progressive coalitions.

“Jews shouldn’t be subject to a litmus test in order to be part of movements to advance human rights,” she said.

The spat came during a week when both the Jewish groups targeted by boycott and environmental groups like Sunrise, which is best known for promoting the Green New Deal, are scrambling to save President Joe Biden’s social services and infrastructure package in Congress.

“This is modeling good accountability. When our friends make bad choices, we call them in,” Phil Aroneanu, who directs strategy for the Jewish climate change group Dayenu, wrote on Twitter in response to the Sunrise statement. “Now let’s get out there and pass the #BuildBackBetterAct!”