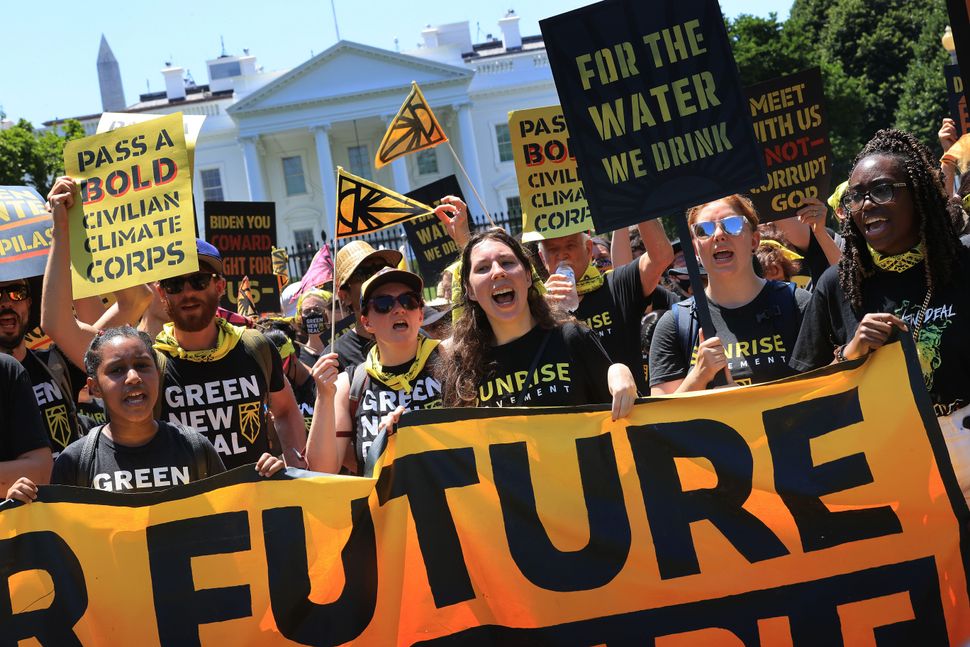 Hundreds of young climate activists rally in Lafayette Square on the north side of the White House to demand that U.S. President Joe Biden work to make the Green New Deal into law on June 28, 2021 in Washington, DC. Organized by the Sunrise Movement, the ‘No Climate, No Deal’ marchers demanded a meeting with Biden to insist on an ‘infrastructure package that truly invests in job creation and acts to combat the climate crisis.’ Photo by Getty Images

Update: The national Sunrise Movement distanced itself from its D.C. chapter on Thursday, but stopped short of condemning the boycott.

The D.C. chapter of the environmentalist Sunrise Movement is declining to participate in a voting rights rally in Washington because three pro-Israel Jewish groups are included: the Jewish Council on Public Affairs, the National Council of Jewish Women and the Religious Action Center of Reform Judaism.

“Given our commitment to racial justice, self-governance, and indigenous sovereignty, we opposed Zionism and any state that enforces its ideology,” Sunrise DC wrote in a statement posted to Twitter. The organization said it had declined a speaking role at the rally, scheduled for Saturday, and organized by the Declaration for American Democracy, a coalition of more than 200 liberal groups. Sunrise DC also asked rally organizers to remove JCPA, NCJW and the RAC from the coalition.

Those three groups are stalwarts of the Jewish establishment’s liberal wing, advocating for progressive political positions on on abortion, housing and other domestic issues while voicing varying degrees of support for Israel. While all three organizations support the principle of a Jewish state in Israel — the basic premise of Zionism — they are all focused primarily on U.S. politics and JCPA is the only organization that lists American support for Israel as one of its top priorities.

“National Council of Jewish Women works for the safety and wellbeing of Americans, Israelis, and Palestinians,” Sheila Katz, the group’s CEO, said in a statement. “Our commitment to working across lines of difference includes our willingness to engage in dialogue with groups that take issue with our policies.”

The Sunrise Movement, Sunrise DC and the Declaration for American Democracy did not respond to requests for comment.

The Sunrise Movement, best known for its support for the Green New Deal, spoke out against U.S. military aid to Israel during last spring’s violence in Gaza and Jerusalem, but it is not clear whether they approved the DC chapter’s statement.

IfNotNow, a close Jewish ally of Sunrise, declined to comment.

In addition to the three pro-Israel groups Sunrise DC took issue with, the coalition includes two other progressive Jewish organizations: Bend the Arc and Worker’s Circle. Bend the Arc intentionally does not take a position on Israel and Worker’s Circle has historically identified as “non-Zionist,” while supporting a two-state solution to the Israeli-Palestinian conflict.

“This is the vilification of Jewish nationhood and a litmus test for all who support it,” wrote Greenblatt, whose own organization has faced boycott calls from progressive groups over its support of Israel. “This is antisemitic – plain and simple.”

Both the Jewish Democratic Council of America and the American Jewish Committee posted similar statements, with all three describing it as “plain and simple” antisemitism on Twitter. Rep. Jerry Nadler, the New York Democrat, called the decision “misguided, unproductive, offensive and wrong.”

Sunrise DC drew praise from others on social media, including Anthony Lorenzo Green, a neighborhood commissioner in the city, and Zeina Ashrawi Hutchinson, daughter of longtime Palestinian Authority minister Hanan Ashrawi, who said, “This is what solidarity and commitment to justice and liberation looks like!”

The Declaration for American Democracy coalition organized the rally to support two pieces of federal legislation that would expand voting rights, and to champion statehood for the District of Columbia.

“The work of our coalition to ensure that every American has access to the right to vote is too important not to remain in partnership as we push Congress to act,” Rabbi Jonah Pesner, director of the RAC, said in a statement. “As an organization committed to social justice and our progressive Zionist values, we will continue to work toward the passage of comprehensive voting rights legislation.”

The coalition includes several non-Jewish organizations that have expressed strong support for Israel, including the American Federation of Teachers, which is run by Jewish labor leader Randi Weingarten, and the Leadership Conference on Civil and Human Rights. The coalition spans staunchly leftist organizations like Code Pink, the anti-war group, and religious affiliates like the Franciscan Action Network, which seeks to eradicate both poverty and abortion, according to its website.

Some liberal groups supportive of Israel have previously faced pressure from the right to cut ties or leave coalitions with figures and organizations that are harshly critical of Israel. The RAC, for example, works closely with the Quaker-affiliated American Friends Service Committee, which supports a boycott of Israel, and William Barber, a civil rights leader who called Israel “a colonialist project” in the service of “expanding a global empire.”