Sunrise Movement distances itself from boycott of Zionist groups 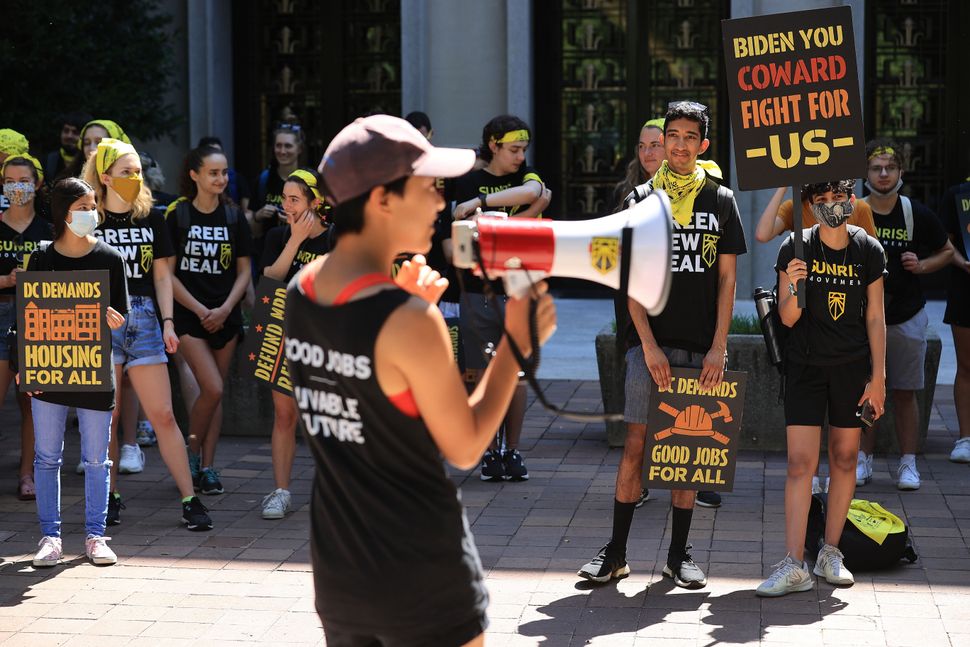 WASHINGTON, DC – JUNE 28: Hundreds of young climate activists prepare to march from John Marshall Park to the White House to demand that President Joe Biden work to make the Green New Deal into law on June 28, 2021 in Washington, DC. Organized by the Sunrise Movement, the ‘No Climate, No Deal’ marchers demanded a meeting with Biden to insist on an ‘infrastructure package that truly invests in job creation and acts to combat the climate crisis.’ Photo by Getty Images

The Sunrise Movement, best known for its support for the Green New Deal, distanced itself Thursday from its Washington, D.C. chapter’s boycott of a rally that included three Zionist Jewish groups.

“As a national movement that supports freedom and dignity for all people, we will always welcome anyone who acts on our principles and chooses to join the fight for collective liberation,” the national Sunrise Movement said in an press release Thursday afternoon.

“We will always welcome anyone who acts on our principles,” the Sunrise Movement said.

The national organization said it had not seen the statement from Sunrise DC released Tuesday evening. Sunrise DC said it had turned down a speaking role in a voting rights rally planned for Saturday over the inclusion of three Jewish organizations with ties to Israel — the Religious Action Center of Reform Judaism, the National Council of Jewish Women and the Jewish Council on Public Affairs — and asked organizers to remove those groups from their coalition.

The D.C. chapter’s stance is an increasingly common call from the left — that groups not just support Palestinians, but reject Jewish statehood.

The Sunrise Movement did not condemn its D.C. arm, though, and said that the struggle for “rights of Palestinians” are included within the principles that its coalition members should uphold. But it said that as a decentralized movement, its local chapters were run by volunteers with the ability to act independently.

The failure of the Sunrise movement to speak clearly in condemnation of the offensive statement this week from their Sunrise DC hub that sought to erase the presence of the RAC, NCJW, and JCPA from the fight for voting rights, is shameful. The statement and tepid response 1/4

“The failure of the Sunrise Movement to speak clearly in condemnation of the offensive statement this week from their Sunrise DC hub that sought to erase the presence of the RAC, NCJW, and JCPA from the fight for voting rights, is shameful,” the group said on Twitter. “We do not consider our work on voting rights to be in conflict with our progressive Zionist principles.”

The flap over the rally upset an understanding that has allowed the American Jewish establishment’s liberal wing to work with groups who hold a starkly different view of Israel. The RAC, which is part of the Reform Movement, for example, works closely with the Quaker-affiliated American Friends Service Committee, which supports a boycott of Israel.

Sara Yael Hirschhorn, who is working on a book about Zionism and identity politics, said the lack of support for the three Jewish groups from progressive allies will test those partnerships.

“How are we going to work with groups who, when we need people to stand up for us, are not standing up for us?” said Hirschhorn, who teaches at Northwestern University.

But Sunrise DC didn’t receive much support from the broader progressive movement either, and several liberal voices seized on Sunrise DC’s focus on Jewish groups. While the chapter did not object to the presence of two Jewish groups in the coalition that do not identify as Zionist — Bend the Arc and Worker’s Circle — they also did not object to a handful of non-Jewish organizations with [friendly ties to Israel.

The coalition includes, for example, the Center for American Progress, which hosted then-Israeli Prime Minister Benjamin Netanyahu in 2015, the American Federation of Teachers, which has sent delegations to Israel, and the Leadership Conference on Civil and Human Rights, which has released statements supportive of Israel.

Abraham Gutman, an opinion writer for The Philadelphia Inquirer, tweeted that he does not believe that boycotting Zionist groups is antisemitic. But he couldn’t help noticing which groups Sunrise DC targeted.

“It’s clear that they check the Zionist ‘cred’ of only the Jewish groups,” Gutman said on Twitter. “That’s bad.”

JCPA is the only one of the three organizations Sunrise DC objected to that lists advocating for Israel as one of its top priorities. NCJW lists support for a Jewish homeland in Israel as one of its principles, but its work on Israel is limited to a program supporting women’s rights in the country. The RAC is the political advocacy arm of the Reform Movement and its lobbying is focused almost exclusively on domestic issues like voting, racial justice and abortion, although it supports the positions of the Union for Reform Judaism, which is staunchly Zionist but often critical of the Israeli government.

Dov Waxman, who leads the Israel Studies center at the University of California, Los Angeles, said that the test for which Jewish groups are welcome in progressive coalitions has shifted in recent years. While there were pitched battles over Israel and Zionism among left-wing activists dating back to the 1960s, Waxman said many liberal Zionist Jewish organizations had still managed to participate in progressive coalitions through their support for Palestinian statehood and opposition to the Israeli occupation. But demands that these groups reject Jewish statehood altogether have been increasing in recent years.

“The protestations from American Jews that will say, ‘Look, we may be Zionist but we’re liberal Zionists’ — none of that matters in the eyes of groups and individuals who denounce Zionism as a whole,” Waxman said. He added that while he believes boycotting Zionist groups is not inherently antisemitic, it risks shutting the vast majority of American Jews out of liberal spaces.

While most American Jews are highly critical of the Israeli government’s treatment of Palestinians, and significant minorities believe Israel is guilty of apartheid or genocide, an overwhelming majority still express a close emotional attachment to the Jewish state.

The most prominent elected official to defend Sunrise DC was Virginia state representative Ibraheem Samirah, who apologized two years ago for making offensive comments about Jews and Israel.

“I stand with @SunriseMvmtDC in taking the strong stand against Zionist Supremacist co-opting of enviro-justice organizing, including the fight for voting rights for all,” Samirah wrote on Twitter in a series of messages Wednesday that falsely claimed Israel was responsible for starting the Iraq War.

Virtually no organizations involved in the controversy over Sunrise DC’s boycott wanted to comment this week. The silence may have been the result of what several of those familiar with the situation say was an unexpected move by Sunrise DC Tuesday that was not coordinated with the Sunrise Movement or any Palestinian rights groups.

Bend the Arc, one of the Jewish groups in the voting rights coalition not targeted by Sunrise DC, condemned the call to boycott the three other organizations.

“Only by working together across lines of difference are we powerful enough to tackle the enormous existential crises we face as a society,” a spokesman said by email. “We reject attempts to divide us from winning the future we need.”

At least one other local Sunrise chapter was explicit in its condemnation of Sunrise DC’s boycott.

“Standing in solidarity with the Palestinian people is morally just and not antisemitic,” the George Washington University Sunrise chapter said on Twitter Thursday. “Singling out explicitly Jewish organizations despite non-Jewish organizations in the coalition holding similar stances on Israel is unquestionably antisemitic and has no place in our movement.”

Sunrise Movement distances itself from boycott of Zionist groups