A Florida Jewish community turns out for police officer, 28, killed on duty in ‘Shabbos Park’ Days earlier, Chirino was shot and killed while confronting an 18-year-old accused of stealing items from cars.

The residents of Emerald Hills, a tight-knit community that boasts a close relationship with local police, were shaken by Chirino’s death and wanted to show gratitude for what many called an act of heroism. Volunteers passed out pink prayer cards, stickers with Chirino’s face and T-shirts that read, “Fallen but not forgotten.” 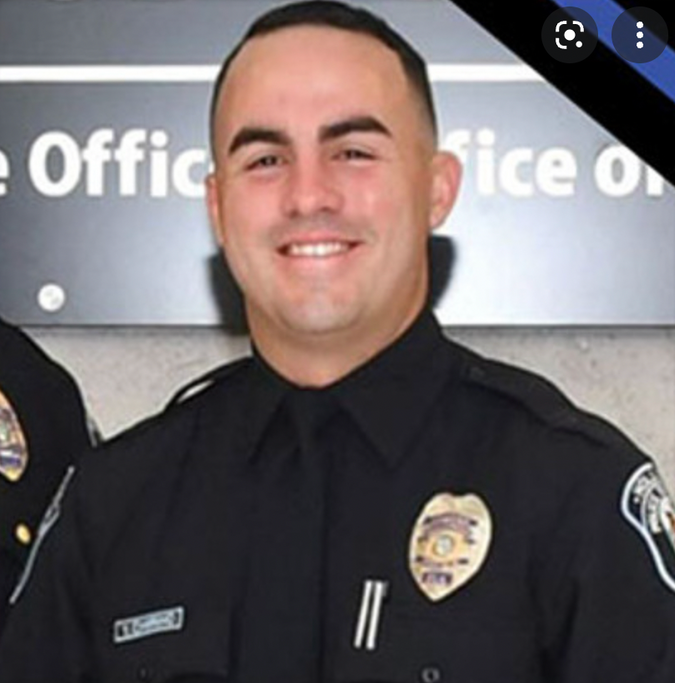 Organizers estimated some 1,000 attended the Oct. 21 vigil at Mara Berman Giulianti Park, the same park where the shooting took place. During the vigil, police and community members, both Jews and non-Jews, sang “Oseh Shalom” a Hebrew prayer for peace.

“For the community of Emerald Hills, this has always been a happy place, a spiritual place, not just for the Jewish community, but for everyone,” Hollywood Commissioner Adam Gruber said. “You see, this tragedy didn’t strike close to home. It struck home.” The shooting was a rare act of violence in Emerald Hills, a usually quiet residential neighborhood in Hollywood where residents say petty theft is the most common crime committed. Community faith leaders, politicians and law enforcement officials said the incident was a brutal reminder of the dangers law enforcement officers often face.

“They confront the risks he faced, and they do it every day for all of us,” said Congresswoman Debbie Wasserman Schultz while speaking on stage. “Few of us face that peril in our 9-to-5s.”

Chirino, 28, was born in Havana, Cuba, and migrated to Miami with his parents as a child. He became a U.S. citizen at 10-years-old, according to an official GoFundMe page to pay for funeral expenses. He earned a bachelor’s degree in criminal justice from Florida International University and began working at the Hollywood Police Department in 2017.

He loved playing soccer, traveling and posting videos about his adventures on Youtube. His friends, family and colleagues remembered Chirino as a fun-loving spirit and hardworking officer.

“In the short four and a half years he was with our police department family, he had such a positive impact, and he loved life and he lived it to the fullest,” said Hollywood Police Chief Chris O’Brien during the vigil.

Chirino was an hour into his shift on Oct. 17 when he responded to calls of a suspicious person in Emerald Hills late at night. Neighbors reported a young man riding a red bicycle and pulling on car door handles.

Police said that the young man was Jason Banegas, a Miami teenager with a lengthy criminal history who matched the description of the suspect. He had been released from jail 30 days earlier.

He stole a red bicycle from a house, police said, and rode around looking for unlocked cars. He later returned to the country club with two sets of AirPods, an iPhone, an iPod and cash, according to the warrant. He put the items on a bench and left again on the bike, the Jeep driver told police.

Banegas was riding near the park when Chirino stopped him. Another officer said he saw the two fighting in a grassy area as Chirino attempted to wrestle a gun from Banegas’ hand, the warrant said. The second officer kicked Banegas to knock the gun from his hand and handcuffed him.

The second officer then noticed that Chirino had been shot in the face and was unresponsive. Officers drove Chirino to a nearby hospital where he was pronounced dead at around 1 a.m. Monday.

The warrant does not mention if or when the second police officer heard a gunshot. The Jeep driver told police he heard two gunshots. Banegas told investigators that he meant to shoot himself, not Chirino, according to the warrant.

Banegas remains in jail without bond on five charges, including murder. His lawyers did not respond to emails requesting comment.

“The next morning, when it came out that we had lost an officer, everyone I spoke to was so distraught,” Frier said in an interview. “What can we do? We need to do something.”

Some community members brought food to the police department while others anonymously donated T-shirts for the vigil. Local school students wrote cards for Chirino’s family. Along with organizing the event, the synagogue also posted a fundraiser on its website to raise money for Chirino’s family and fellow officers. As of Thursday evening, over $22,000 had been donated.

Since last Monday, the memorial of flowers, photos, candles and hand-drawn posters at the park has grown. Community members and elected officials were especially disturbed that the shooting took place just outside of Mara Berman Giulianti Park, which many lovingly refer to as “Shabbos park.”

During the vigil, Commissioner Gruber announced that the commission supported a permanent memorial at the park to honor Chirino’s sacrifice.

Longtime residents like Marcy Hoffman, 70, have been bringing their children and grandchildren to play in the park every Saturday afternoon. She said it was heartbreaking that Chirino lost his life at their community park.

“It’s a safe neighborhood. My teenage grandchildren walk from house to house Friday night without a second thought,” Hoffman said. “I guess maybe there will be a second thought.”

Rabbi Yosef Weinstock gave the final remarks at the vigil. He noted that the Bible portion his synagogue would read Saturday morning was the binding of Isaac when Abraham was prepared to sacrifice his son until an angel intervened.

That space became sacred, Weinstock said, and now, after Chirino’s sacrifice, Emerald Hills’ park is a sacred space, too.

“May Officer Chirino’s memory be a blessing,” he said.

A Florida Jewish community turns out for police officer, 28, killed on duty in ‘Shabbos Park’