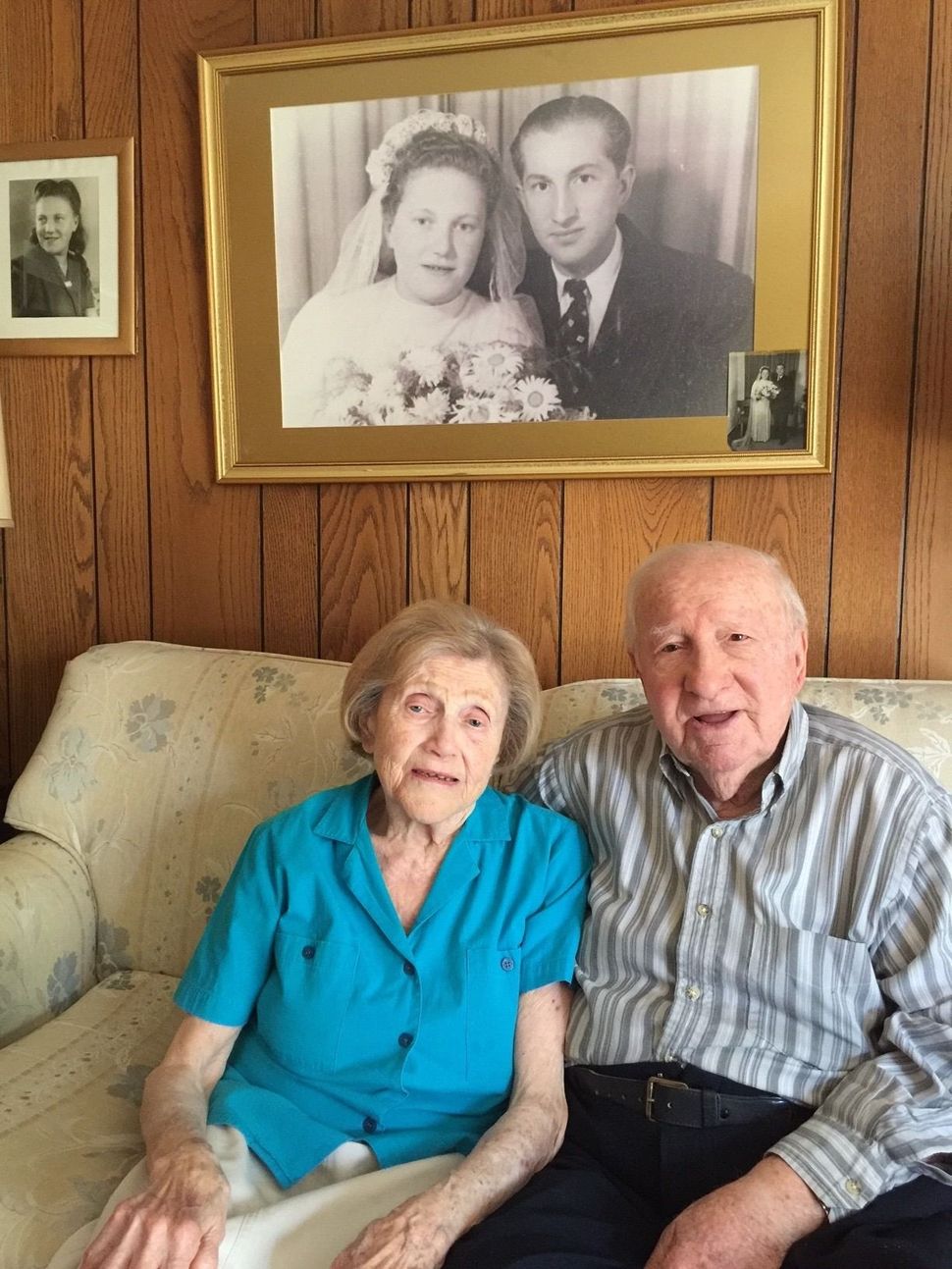 Sam and Frieda Weinreich are thriving. Sam is 102-years-old and Frieda is 97. They have been married 75 years. If they are not the oldest Holocaust-surviving couple in the United States, as local Memphis news reports claim, they are certainly in the running.

Frieda is tiny, like you could put her in your pocket. But looks can be deceiving. She survived hell on earth for six long years, as did Sam. 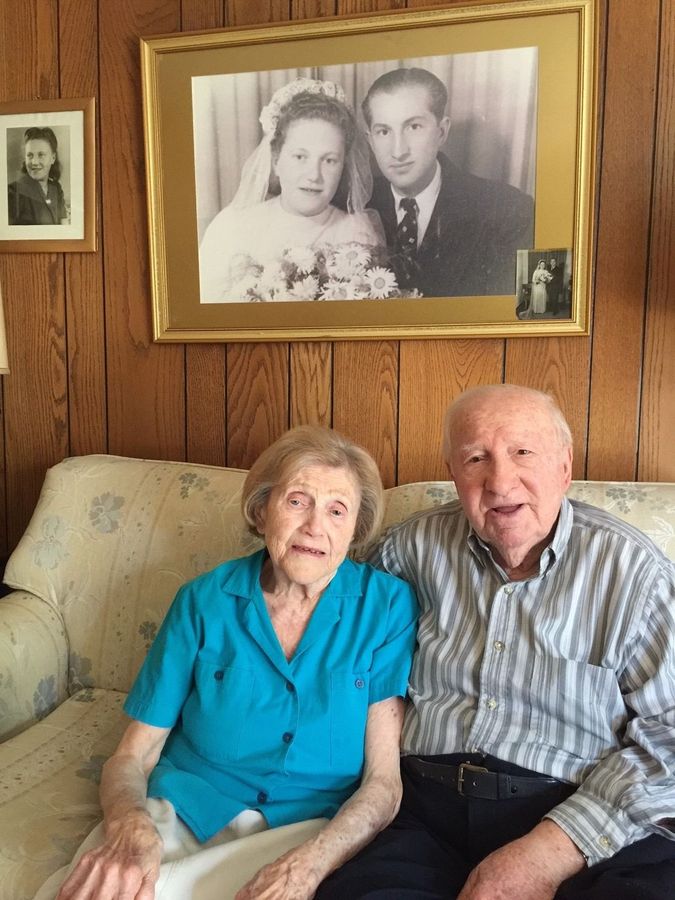 Sam has made it his life’s mission to tell his story to as many people as possible — at schools, synagogues, on Zoom, any place that’ll have him. “Everything I tell you is true,” Sam said. “Everything I say is real and happened.”

Sam was born into an Orthodox family in 1919 in Łódź, Poland. One of nine children — four brothers and four sisters — his family owned four furniture and antique shops. Sam began singing in his school’s choir when he was 8 years old. Gifted with perfect pitch, he was a mezzo-soprano in his youth, later becoming a tenor as he grew up.

“When I got wet as a baby, I’d cry in high C,” he joked. Sam sang in shul with the greatest cantors ( of that time. “We’d see so many Jews walking on Shabbos in Łódź,” he said. Frieda was also born in Łódź, on July 22, 1924. She grew up with five brothers and sisters and loving parents. Frieda was just 15 when “the Germans began beating up Jews in Łódź,” she said.

Both Frieda and Sam’s families were locked in the Łódź Ghetto, enduring despicable conditions and meager food rations. Frieda prayed in secret and kept the Sabbath however she could.

“We were so cold,” she recalled, “and many people died from starvation.” One of those who died was her father, in 1941.

“I saw people dying of starvation and disease in the streets. They’d sit on the sidewalk and die, right there,” Sam said with tears in his eyes. “I watched my mother, sister and brother starve and die from hunger. If someone died in the ghetto, we wouldn’t tell anyone right away, so others could still take their food rations. Life was miserable.”

When the Nazis transferred children out of the ghetto, two of Sam’s brothers and their wives decided to go with their children rather than remain. “We never saw them again,” Sam said, breaking down into tears.

His nephews’ shoes are in the display of children’s items at the Holocaust Museum.

Eventually, SS guards began liquidating the ghetto. Sam and Frieda were separately stuffed into a train’s cattle cars with other Jews.

Arriving at Auschwitz, Sam stood face to face with Josef Mengele, the Nazi doctor who decided the prisoners’ fate. Soon after, Sam was transferred to Dachau to work.

There, Sam once sang for a doctor in exchange for food while sick with typhus. “I assume because of that extra food, I’m still here to tell you what happened to my family and so many people,” Sam said. Another time, an SS guard kicked Sam in his face for hiding a potato he’d found.

“I lost seven teeth, for a potato,” he said.

In 1945, as Allied forces drew closer, the Nazis moved prisoners deeper into Germany. When Sam’s train was bombed, he and a friend hid in the woods, eventually stumbling upon a farmhouse with an American soldier standing guard. “I knew then that we were free,” said Sam.

Though Frieda was with her mother in Auschwitz in the beginning, it didn’t last long. They were forced into a line headed for the gas chambers. Somehow, fellow prisoners pulled Frieda out, but couldn’t save her mother.

“I held on to my mother as they dragged me away,” Frieda said. “I had no idea what was happening, but they knew, and they saved my life.”

Her mother was murdered in the gas chamber. Eventually, Frieda was taken to work as a bricklayer in the Parschnitz labor camp in Czechoslovakia, where Russian soldiers liberated her in 1945. After the liberation, Sam met Frieda in a displaced persons camp in Germany.

“We didn’t have any relatives, so everybody in the camp came — 300 people at our wedding dinner.”

On April 5, 1949, Sam and Freida emigrated to the United States. A rescue organization sent them to Memphis.

“I thought, ‘Why not Chicago, New York, Hollywood? What’s in Memphis? Where is Memphis?! Are there Jews?’”

When they arrived, the Memphis Jewish Federation sponsored them and helped them acclimate. Sam first worked restoring furniture, then transitioned to the paint industry and later retired as a property management superintendent.

Both Sam and Frieda, who still speak Yiddish to each other, were active in the Memphis Jewish community. Sam has sung the “Partisan Song” and “Ghetto Song” for nearly 60 years at the annual Yom HaShoah commemoration.

The secret to a long marriage after such a traumatic beginning?

“Everyone has ups and downs,” said Frieda of their marriage, “we kept the ups up and the downs down!”

“She likes green grapes, I like red,” said Sam. “I like poached eggs, she likes deviled. If one person has a hot temper, the other has to have a cool temper. I’m not going to tell you we didn’t have any misunderstandings. But one of us always has to forget what happened yesterday.”

“After what we went through, I never thought I’d survive — but to get married and have children, the Man upstairs is watching over me,” Frieda added. “Thank God, we have a beautiful family. That’s the most important.”