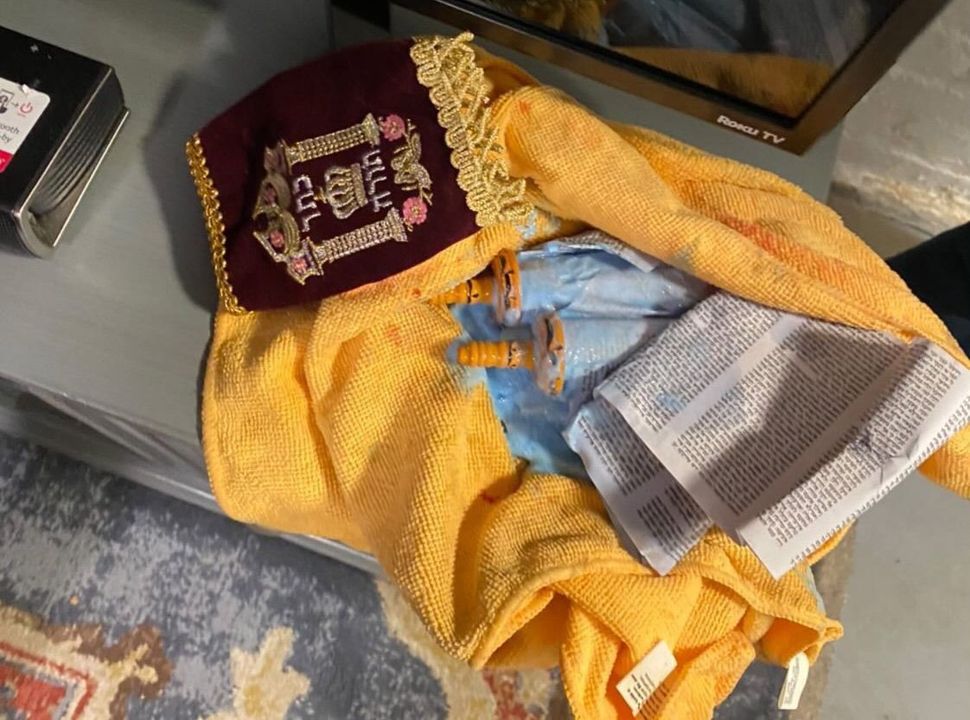 The Torah scroll at George Washington University was covered in laundry detergent. Courtesy of Twitter

A day after a fraternity at George Washington University reported that a small replica Torah used in its initiation process was damaged during a weekend vandalism spree, the university’s Jewish community is working to raise awareness of campus antisemitism — even while some wonder whether the incident was an act of hate.

A rally is set to take place at the university Monday evening, and the university’s president, Thomas LeBlanc, has condemned the vandalism, calling it an act of antisemitism in a statement to the student newspaper. University police and the police department of Washington, D.C., where the school is located, are jointly investigating, he said.

Ezra Meyer, a junior at the university, said in an interview that he was heartened by the university’s response but was waiting to see whether administrators backed up their statements with actions. One he’d like to see, he said: including antisemitism as a topic in campus diversity training.

“What I’ve seen so far is pretty universal condemnation,” Meyer said. “It remains to be seen whether those are just platitudes issued out of necessity.”

Rabbi Levi Shemtov, who directs the university’s Chabad and is the senior representative of Chabad in Washington, D.C., visited the fraternity on Sunday. He said in an interview that “the plague of antisemitism is raging on campus” and had become worse during the COVID-19 pandemic.

“As to the intent of the perpetrator and whether they knew exactly what this text was, attention still must be called to this heinous act,” Shemtov said. “This cannot be tolerated any further.”

But some voices cautioned against jumping to conclusions regarding the incident, which occurred at the Tau Kappa Epsilon fraternity.

Mitchell Barak, an Israeli political consultant and alum of the school, said the incident looked like the work of drunk college kids on a Saturday night.

“When the bars in D.C. close at 1:30 they look for trouble, or an afterparty, and either they had a vendetta against someone in TKE or they were blackballed pledges who weren’t accepted into the fraternity,” said Barak, who graduated in 1990. “Not everyone who’s a vandal is an antisemite.”

Meyer, president of the student club GW for Israel, said that a Christian Bible near the Torah in the fraternity basement was not vandalized and that the event is only the latest in a series of incidents targeting Jewish students.

“There’s a possibility that it was some drunk kid on Halloween,” Meyer said. “But in most of these instances, there have been people who have been quick to be dubious of the presence of antisemitism.”

In his opinion, Meyer said, it “is quite a coincidence for these things to keep happening to the Jewish community at this school and have it not be antisemitism.”

The president of Tau Kappa Epsilon said the vandalism took place early Sunday morning, according to a report in the university’s student newspaper. He said hot sauce was poured throughout the house and many objects were thrown around.

Tau Kappa Epsilon is not known as a Jewish fraternity. At George Washington, its share of Jewish members approximately reflects the 24% of the overall student body that is Jewish.

The damage that most caught the public eye was a replica Torah that the fraternity president said was kept in the basement and used to swear in new members. Replica Torahs, available in gift shops, are printed and not prepared by a scribe.

“Our entire chapter is outraged and saddened by this blatant act of antisemitism and violence against our brothers,” the fraternity said in a statement Sunday afternoon.

A picture showing the damaged Torah circulated widely on social media on Sunday, drawing condemnation from a wide array of Jewish advocates and influencers, some of whom connected the incident to what they said was a pattern of antisemitism on college campuses.

“This isn’t Nazi Germany in 1938. It’s American college campuses in 2021,” wrote Hen Mazzig, an influencer who was one of the first to post the picture online, in a tweet that was shared more than 5,000 times by early Monday morning.

The vandalism comes days after Hillel International and the Anti-Defamation League released the results of their first-ever joint survey about antisemitism on college campuses. The survey found that a third of American college students said they had experienced antisemitism in some form over the last year. The ADL’s D.C. chapter tweeted that it had spoken with students and police and “expected a full & rapid investigation.”

As news of the incident spread rapidly online, several inaccuracies spread as well. Among the many accounts stating that the vandalism took place at a Jewish fraternity were Yeshiva World News, an Orthodox news service, and the American Jewish Committee, which last week released an antisemitism report of its own.

The Instagram announcement of the “Torah procession and solidarity rally” planned for Monday afternoon shows a number of participating groups including the campus Hillel, which said that it would host a discussion space at its building during the hour before the rally for students to talk about the incident.

“I feel that something like this deserves a lot more than routine attention,” Shemtov, the Chabad rabbi, told the student newspaper. “Especially as it comes in the face of last week’s event where the president of the university himself stood on a stage and said he wouldn’t tolerate any antisemitism on this campus.”

—
Portions of this post appeared first on Jewish Telegraphic Agency.