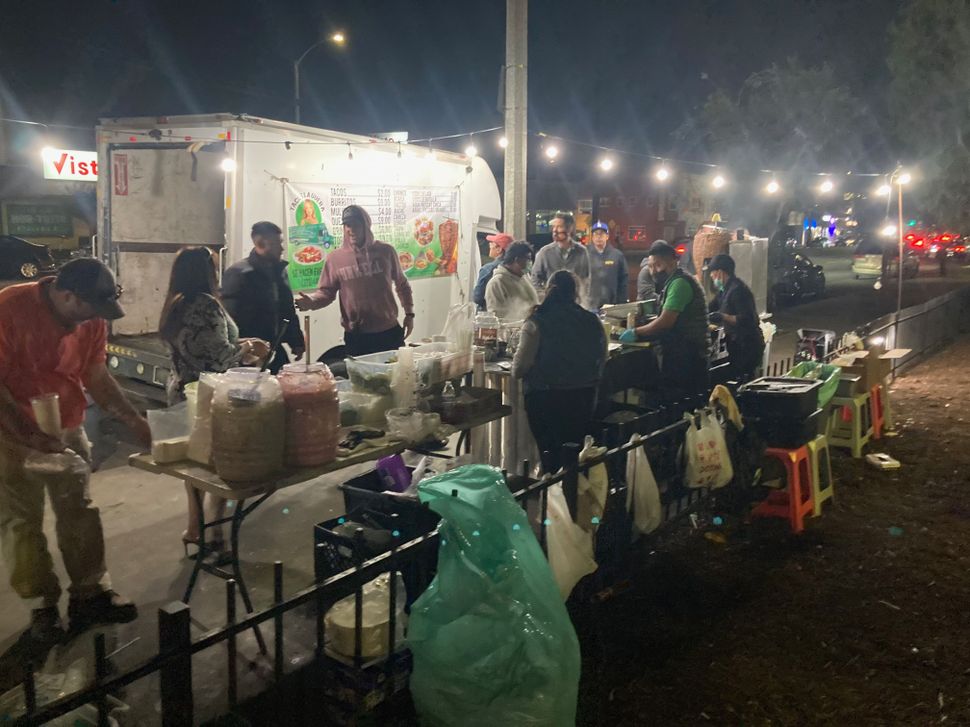 I was standing on the sidewalk waiting my turn at Tacos La Guera, a street vending stand that sets up each evening between a Whole Foods parking lot and the four lane cacophony that is Lincoln Boulevard.

“How many tacos?” a young man named Rafael asked me, pressing a 12-inch chef’s knife against a massive cone of al pastor pork crowned with a pineapple.

I passed on the pork and asked for a quesadilla, which means another cook tossed shreds of white cheese directly on a sizzling flat top where it instantly melted, topped it with a flour tortilla, then flipped and folded the whole gooey mess, and handed it over to me so I could ladle on some bright green tomatillo salsa.

It’s one of the best meals in L.A., but the system that delivers it to me is broken and deeply unfair. Despite a state law that was supposed to ease licensing for street-cart vendors, few have been able to get the necessary permits. They remain at the whim of authorities who cite them and confiscate their goods.

That’s where we come in. Yes, we Jews.

“The vendor-rights movement really touches me,” said Donna Bojarsky, a longtime civic activist and philanthropic consultant. “It’s how many Jewish immigrants started life in America, and here and now, street vendors are often key support for their family.”

She’s not wrong on the history. More than 2.5 million Eastern European Jewish immigrants settled in New York in the early 20th century. To make a living, they sold, swapped and bargained like in the old country, from carts.

In fact, Jews were the first pushcart vendors in America, starting in 1889. By 1900 there were 25,000 pushcarts in New York. Of course the uptown New Yorkers looked down on these immigrants and their street vending, calling them dangerous, dirty and a threat to local businesses. An 1893 editorial in The New York Times decried the Jewish vendors for turning lower Manhattan, “into perhaps the filthiest place on the Western Continent.” From a July 6, 1924 edition of the Forverts. A pickle pushcart on the Lower East Side. Image by From the Forward archive

As they say in Yiddish, plus ca change. The LA Street Vendor Campaign fought for a decade to allow street vendors to operate with proper licensing in Los Angeles, winning a big victory in 2018 when a state law decriminalized street vending and set out certain conditions to legalize it.

But a UCLA study found that, “there are still significant legal barriers that make it virtually impossible for sidewalk food vendors to formalize their businesses.”

Sheriff’s deputies slap vendors with tickets and confiscate their carts. Most vendors cannot navigate the confusing permitting regulations, making vendors ripe for extortion and violence, according to the August report by the UCLA School of Law Community Economic Development Clinic and the nonprofit law firm Public Counsel.

The pandemic highlighted the inequalities, said the report, with vendors being among the first businesses shut down and the last to receive economic aide.

“Permits? There’s no permits,” Tacos La Guera’s owner, Rosia Lopez, said when I called her after downing my quesadilla. “Nobody I know has them, and people who say they have them are lying.”

Lopez, who is 34 and from Guadalajara, has six taco stands around the city. She opened her first cart in 2006, and now supports 10 employees plus her family. Lopez said she gets a fine every week. The day before we spoke, she said deputies gave one of her carts a $1,000 fine and threw its food on the ground.

“Food vendors remain exposed to the daily threat of ticketing, harassment, and fines, which perpetuate an unending cycle of criminalization and poverty,” reported the UCLA study. Of the city’s estimated 10,000 sidewalk food vendors, it found only 165 have received permits.

It’s a self-defeating way to treat business people who, according to a 2015 study, pump $500 million into the local economy.

“For me, street vending is an important industry because it cuts across many sectors,” said Rudy Espinosa, who for a decade has helped lead the movement to legalize street vending. “Street vendors support local businesses, hire local workers, and often serve as the sole source of retail food in under-invested neighborhoods.”

Their goods are part of the way L.A. likes to see itself. Even as real street vendors struggle for legitimacy, at the Hollywood Bowl, a faux “Street Taco” kiosk sells two bland tacos for $11.50, $7 more than you’ll pay for much better versions from Tacos La Guera.

Last month, I was in line for a quesadilla at the stand on Lincoln Boulevard when two police officers got out of their patrol car — and joined the line behind me.

“Is this legal?” I asked one of them.

There was a pause. “It’s a gray area,” he finally said.

If the cops don’t know whether a taco cart is legal, how should the vendors?

Bojarsky wants the Jewish community to lend a hand in the legal and political battle — not just because it’s the right thing to do, but also to show we haven’t forgotten where we came from.

And how we got here. Where did New York’s Russ & Daughters appetizing juggernaut start? A pushcart. How about Moscot, Johnny Depp’s preferred eyewear company with hundreds of employees and $30 million in annual revenue? On Hyman Moscot’s pushcart.

In New York, at least one Jewish group, the Littauer Foundation, has helped fund the non-profit Street Vendor Project since 2017 based on this legacy. The Project, which provides financial aid and other support to vendors, “appealed to the heritage of Jewish immigrant peddlers,” said Littauer program director Alan Divack.

For Bojarsky, who founded the Future of Cities:LA civic initiative, there’s a moral imperative in overcoming our pushcart amnesia and helping the next generation of vendors gain their foothold on the American dream. She would like to see Jews and Jewish organizations — and maybe Moscot? — join with the LA Street Vendor Coalition to support state and local policy reforms the UCLA study said would reduce barriers to legal sidewalk vending, including a moratorium on citations.

Lopez, the owner of my favorite taco stand, would like that too.

“Everybody starts in the same place,” she said, “and they should support people who are like them.”