I visited a tiny home village for the homeless. Why aren’t there more of them? 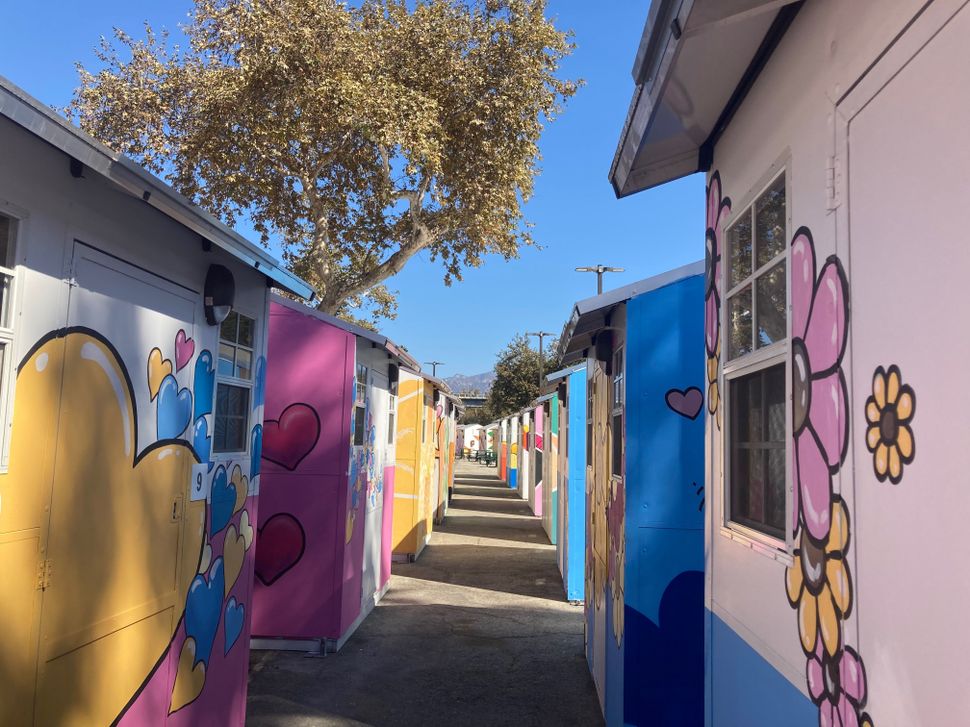 There are 115 tiny homes along the Arroyo Grande Freeway between Pasadena and Los Angeles that weren’t there a month ago. Each took 90 minutes to build, and together they will soon offer 230 unhoused people immediate shelter, food, and health and occupational services.

Oh, and there’s an off-leash area and free veterinary care for dogs in the new development, too.

I walked through the Arroyo Seco Tiny Home Village in L.A.’s Highland Park neighborhood on Sunday with the man behind it, Pastor Ken Craft. I stepped inside one of the brightly painted homes, peeked into the shower and restroom trailers which get cleaned after each use, sat in a shady communal courtyard where future residents will be able to eat or just hang out.

The pastor made sure I saw that each two-person home had a lock on the inside.

“People come here because they feel safe,” he said. “They have a real home.”

All of which raises one obvious question: Why isn’t L.A. building thousands of these? 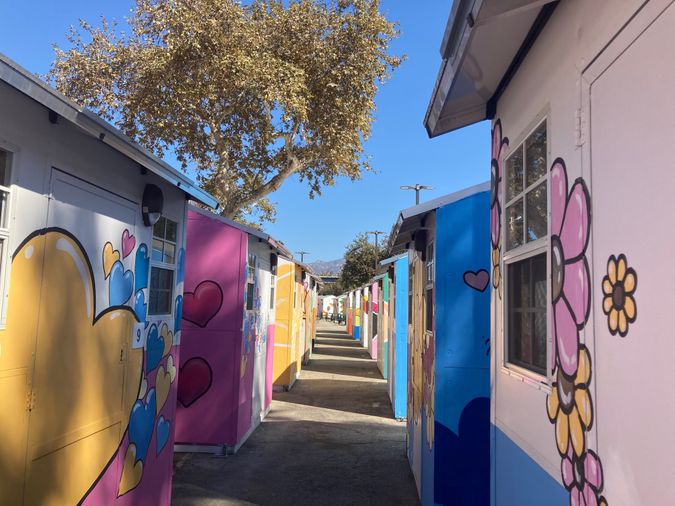 You’ve heard the depressing statistics before: Los Angeles has more than 50,000 unhoused people. The numbers go up by double digits each year. Makeshift shelters spread across our sidewalks. Cars used as homes regularly go up in flames. Three homeless people die on the streets each day in this city. Some 40% of the unhoused are Black.

The medium- and long-term solution is for developers or the government to build much more affordable housing, and for years city officials focused on that, even as the costs to build it went up, and street homelessness mushroomed.

Angelenos complained, or, you know, wrote columns about it. Meanwhile, Craft’s Hope of the Valley Church borrowed an idea being used in other cities and started building villages of tiny homes in February. Arroyo Seco is the sixth, built with the help of L.A. City Councilmember Kevin de Leon on a narrow stretch of land beside the freeway.

An eight-foot sound barrier dampens the noise. When I shut the door of a home and locked it, the cars were a distant stream. It felt … peaceful. A hand-painted sign on the wall read, “You Are Always Enough.” 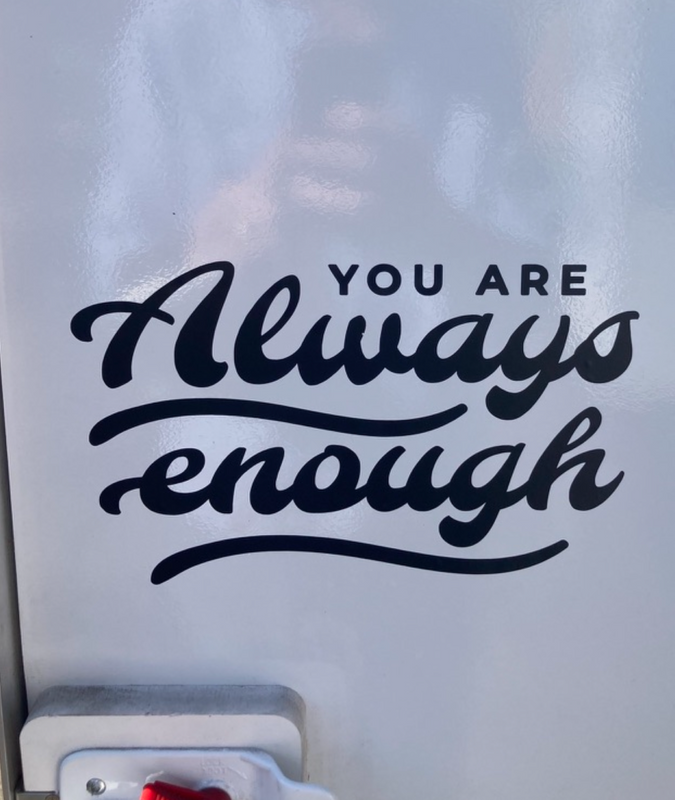 The idea is simple. The city’s Homeless Services Authority assesses homeless people who live within a three-mile radius of each village. To stay there, people have to leave drugs, weapons and alcohol in lockers outside the enclosed, guarded community. There’s a 10 p.m. curfew, with exceptions for work. Residents receive three meals each day, along with medical, mental-health, occupational and other services. Churches, synagogues, businesses and other groups provide donations and volunteers. And every tiny village has a big dog run.

“This isn’t a lockdown,” a church employee told me. “This is a neighborhood.” 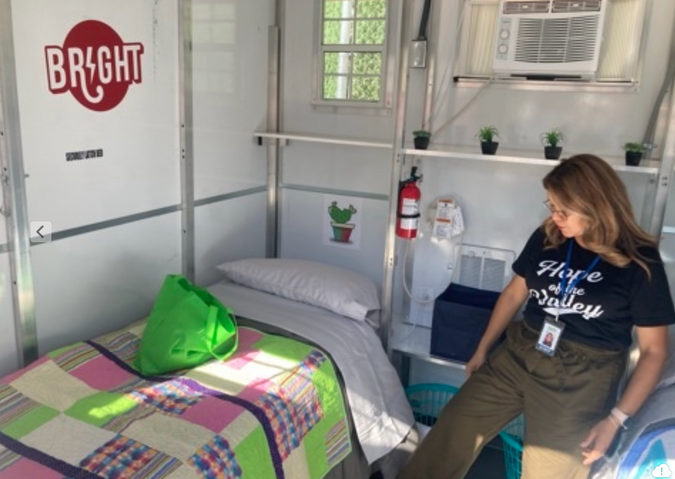 A Hope of the Valley staffer shows the interior of a tiny home. Each resident receives a welcome bag of donated snacks and personal hygiene goods. By Rob Eshman

After the maximum three-month stay, about 60% of the several hundred people who have joined one of the five existing Arroyo villages have found more permanent housing, 20% return to the streets and 20% move in with family or friends, according to Craft..

I asked Craft why a pastor felt compelled to step in where politicians failed.

He told me he was expelled from his last pulpit for having an affair with a congregant. He lost his job and his marriage. After a friend took him to visit a downtown soup kitchen, he dedicated himself to providing men and women with what he needed most himself— a second chance.

“I believe in the value and worth of every human being,” Craft said. “I know what it is to crash and burn and I believe it is incumbent upon us to not write people off. So whether people are motivated because it’s a mitzvah or whether as a Christian or Hindu, I don’t care. Let’s work together to address the humanitarian crisis.”

All of which begs the question: why haven’t a thousand tiny home villages bloomed in every council district? They are relatively cheap, they work, and they don’t take long to build— the homes themselves were designed to pop up at refugee camps.

I e-mailed Mike Bonin, the council member for my neighborhood, Venice, where hundreds of homeless people camp under freeways, on the beach and where four homeless men were shot in August alongside the once-protected Ballona Creek. A spokesman wrote back that Bonin is “continuing to work with the city administrative officer to identify possible locations for a temporary cabin community on the Westside,” including on 70 acres of unused land near Los Angeles International Airport, an idea I proposed in a column in the Los Angeles Times three years ago.

Bonin has yet to meet with Craft, which is unfortunate. The emphasis on permanent housing has come at the expense of getting people off the street, now, into safe places to sleep. Land is not the issue: City Controller Ron Galperin, a long-time proponent of the tiny home villages, has for years published online maps of vacant, available city-owned land where emergency housing could be erected. He is working on an updated map focused specifically on sites that could potentially be used to alleviate homelessness.

Back at Arroyo Seco Village, an elderly man approached Craft and began asking what seemed like endless questions. I assumed he was a journalist like me. Then he asked, “Tell me, how can I move in?”

Craft told the man a church worker would help him arrange it.

Later, the man, who is 66 and asked to be identified only as David, told me he had been homeless for three years. His wife, who was diabetic, died, and he couldn’t afford their Eagle Rock apartment on his own. I asked him what he did for a living. “I took care of her,” he said.

He had been living on the steps of nearby St. Ignatius Church. He said the stress of surviving outside makes finding work and housing impossible. That’s why he had come to Arroyo village.

I visited a tiny home village for the homeless. Why aren’t there more of them?