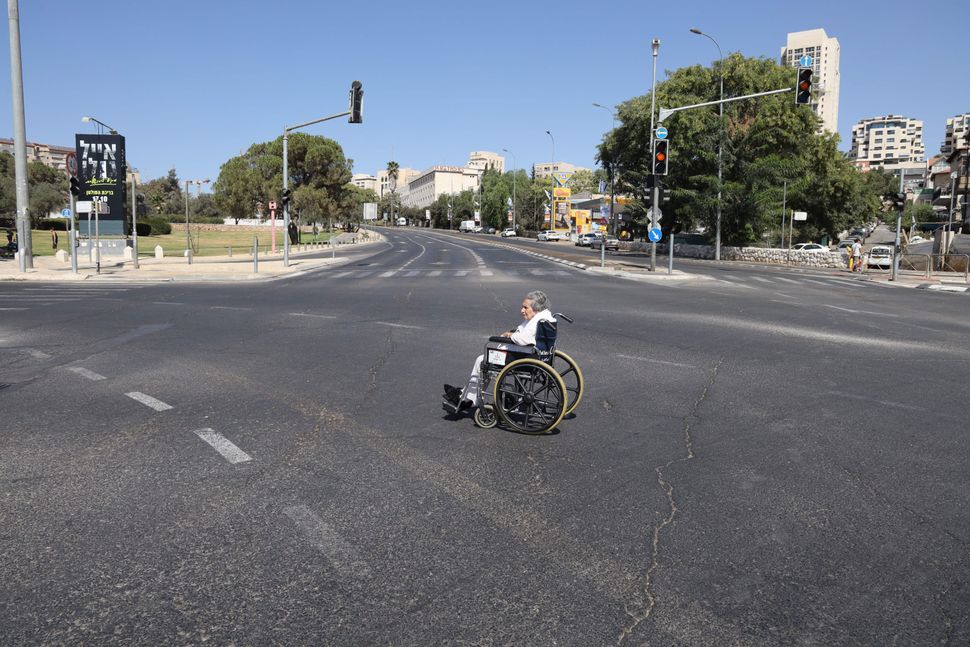 An elderly woman uses her wheelchair on a car-free highway in Jerusalem on October 9, 2019, as Israelis mark the solemn Jewish fast of Yom Kippur and abstain from driving. – Yom Kippur, also known as the Day of Atonement, is one of the most important holidays of the Jewish year, during which Israelis observe a period of a 25-hour fasting, reflection and prayers. (Photo by MENAHEM KAHANA / AFP) (Photo by MENAHEM KAHANA/AFP via Getty Images) Photo by Getty Images

People with disabilities face challenges within the Jewish community, but conditions are improving — with young Jews leading the charge — according to an unprecedented trio of new studies released jointly Wednesday.

Together, the studies looked at a sample of Jewish Americans and employees at Jewish organizations. One also examined the services offered by Jewish social service agencies. Their findings throw into relief the difficulties — from job dissatisfaction to pay disparities — that workers with disabilities face compared to other workers.

Gali Cooks, president of Leading Edge, said the three reports help shine a light on disability rights, which she said was an integral but sometimes overlooked component of the diversity work that the Jewish community has focused on in recent years.

They “really widen the aperture of the way we think about identity and belonging in the workplace,” Cooks said.

The roughly 8% of employees at Jewish nonprofits surveyed by research company Leading Edge who reported that they had a physical or mental disability that impacted daily life expressed lower levels of satisfaction with their employers: 67% of workers with disabilities said they would recommend their organization as a good place to work compared to 74% of all employees.

Another of the reports, by RespectAbility, which advocates for disability rights in the Jewish community, found that despite similar levels of education, Jews with disabilities earned less money than their peers: 26% earn less than $50,000 per year, compared to 8% of all Jewish adults.

But both studies found signs for hope.

The boom in online programming prompted by the COVID-19 pandemic helped 73% of Jews with disabilities connect to Jewish events and 65% of respondents felt the Jewish community had improved at “including people with disabilities” compared to five years ago. When that same question was asked in a previous survey, only 14% agreed with the statement, said Jennifer Laszlo Mizrahi, president of RespectAbility.

Among employees with disabilities at Jewish nonprofits, 53% said their organization provided necessary accommodations to allow them to be successful while 39% were neutral on the question.

Mizrahi said another cause for optimism was that the demographic trends of employees at Jewish organizations who reported having a disability showed that younger generations may be more confident pursuing careers despite a physical or mental disability.

Among the general population, older age groups tend to report higher levels of disability caused by aging or accidents that occur throughout the course of life. However, among Jewish nonprofit workers, 61% of those who reported having a disability were between 20 and 39 compared to fewer than 20% who were over 50.

“That means people with disabilities are starting to feel comfortable applying for jobs at Jewish organizations,” Mizrahi said.

Mizrahi said the Jewish community faces a variety of unique challenges when it comes to disability rights. While educational attainment is highly valued among American Jews, there continue to be disparities in career development between Jews with disabilities and those without them despite similar levels of education. She also said that it was possible that more American Jews may live with autism, schizophrenia and bipolar disorder as a result of being born to older mothers.

While most indicators about accessibility for Jews with disabilities had improved since the last RespectAbility survey in 2018, there remained a disparity between how the general Jewish population and those with disabilities felt about how Jewish communities were faring on inclusion.

The RespectAbility survey also asked survey respondents with disabilities where they felt the most included and the most excluded. Their answers present a complex picture, with synagogues ranking the highest on each count: 21% thought synagogues provided the most access, while 18% said they provided the most challenges.

“We have — definitely — some shining examples of success in certain synagogues, and others that are a continuous challenge for access and inclusion,” Meagan Buren, who oversaw the study, said during a panel discussion Wednesday.

The third study was conducted by the Network of Jewish Human Services Agencies and sought to identify programs helping people with disabilities. The group found 18 programs at Jewish organizations, most of which focused on job training.

Those involved in the research agreed that a crucial way to increase inclusion within the Jewish community is for clergy and nonprofit leaders to become more comfortable discussing disability rights, including sharing their own disabilities and showing their familiarity with the topic.

“Feeling safe is a critical reason people stay employed where they are employed,” said Rueben Rotman, of the human services coalition. “That’s where I think we need to put our energy.”