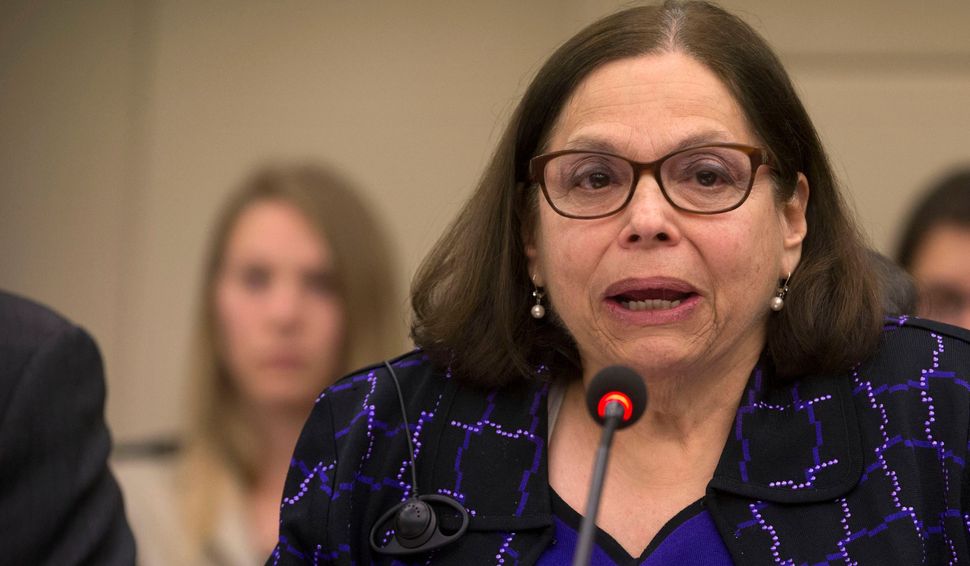 Judith Heumann speaks at the China-US Coordination Meeting on Disability in Beijing on April 12, 2016. Photo by MARK SCHIEFELBEIN/AFP via Getty Images

In 1970, Judith “Judy” Heumann became the first wheelchair user to teach in a New York City public school. Seven years later, she led a 28-day sit-in that resulted in the signing of Section 504 of the Rehabilitation Act — the first federal civil rights law protecting those with disabilities. Since then, Heumann, 73, has served in both the Clinton and Obama administrations and become an international leader in disability rights work.

In February 2020, Heumann published her book Being Heumann: An Unrepentant Memoir of a Disability Rights Activist. On March 2, she will be speaking publicly at a virtual event hosted by Hillel and moderated by Naomi Hess, a junior at Princeton who is passionate about raising awareness of disability issues in Jewish spaces.

As Jewish Disability Awareness and Inclusion Month comes to a close, The Forward spoke with Heumann about the pandemic’s impact on disability rights, her hopes for the Biden administration and how Jewish communities can better elevate the voices of their disabled members. The conversation below has been lightly edited for clarity and length.

Synagogues and most Jewish community centers have been closed during the pandemic. I previously wrote about how Zoom may be opening doors to Jewish prayer spaces for some who don’t normally have access. After the pandemic is over, what lessons of accessibility should Jewish spaces take for the future?

I think we shouldn’t be jumping to conclusions. I think it’s very obvious that one of the important things about this is being able to attend services at synagogues anywhere in the country if they’re doing things virtually. That isn’t even a disability-related issue.

The synagogue I go to in DC – Adas Israel – for many years, they have had the ability to call in, not video… That was something that I used from time to time when it was really cold outside, maybe I would call in. I think being able to keep going virtually could be very important for somebody who is sick, they don’t drive anymore, whatever it might be. But I would definitely not want things to mainly be virtual. I like going to synagogue, because it’s a place for me to be and kind of reflect and meditate.

I think what’s been great about virtual is I think people are really looking — or need to be looking — at what we thought could or couldn’t happen previously, but not go to one extreme or the other. While this has been very beneficial in some cases, virtual has also been difficult for people with certain types of disabilities — low vision and people who are deaf or hard of hearing — [because] there is no captioning. The universe has expanded in a way that we didn’t anticipate previously, in a way that’s forced us to look at things that we previously didn’t.

What do you want to see the Jewish community be doing better for disability awareness and inclusion — beyond pandemic-specific issues?

I think I want it to no longer be called “awareness and inclusion.” We don’t say that for the LGBTQ community or the POC [People of Color] community… For those communities, I think we’ve recognized that we’re having to deal with issues of discrimination and inclusion, learning about what the barriers are, what our feelings are, how we treat people. I think that’s very important.

What do I want? I want the younger community really to have more influence. Typically, in synagogues and other religious groups, older people play more of a role. I think it’s really important for younger people to be looking at the issues of Black Lives Matter, broader communities, segregation — and to speak out about what they want and make it a part of what we’re doing.

That’s a good transition to something else I wanted to ask. There’s a few big movements right now, towards women’s rights and racial justice, and questions of intersectionality come up in all of them. I’m curious how you see those movements being inclusive, or not inclusive, of people with disabilities?

I think it’s fair to say that we’re all learning from each other. Disability, I feel, is really one of the last groups… When looking at intersectionality, I still don’t hear other movements talk about disability regularly. I think it’s a combination of separation, isolation from each other.

I’m learning that disabled individuals are participating in their synagogues. But when you really get to a more meaningful discussion, they still don’t feel a part of the community because of things that people say to them, or don’t say to them, or include or don’t include. I think it’s really, at the most ground level, trying to get people to talk about issues.

I was wondering if you have any specific hopes for what President Biden’s administration will focus on in terms of disability.

So first of all, [I hope] that issues of disabled people will extend to all corners of government. Obviously, leadership from within the White House, but also every government agency needs to be really looking at what they’re doing in relation to hiring, advancements, accommodations for their employees, recruitment of people, training of their staff. Both domestically and internationally, I [hope that] that we as disabled people are not sitting and listening to hear if the word is mentioned. We’re really wanting to get beyond “Is the word mentioned?” Is there a person with a disability seen or people who have invisible disabilities who are mentioning that in who they are?

And again, what we were discussing a minute ago, the importance of all of our movements and recognizing each other’s movements. I am a disabled Jewish woman. I’m pretty secure around disability related issues. But as a woman, I’m still not really fully included in the women’s movement or in the Jewish community. So I think ultimately, what we want to be seeing down the road is being able to bring all of ourselves forward, which does mean a very significantly different way of doing business.

Could you elaborate a bit on what you mean by not being included in women’s movements or Jewish spaces?

I just think that in the women’s movement, including disabled women is something which is happening slowly… I’m old enough that I still look at advertisements. And I love looking at advertisements, because advertisements for me are reflecting the changes that companies believe viewers want to see. And the number of times you see a disabled person in those advertisements is so insignificant, but you see, kind of every combination of people, right? Gay people, straight people, interracial couples, people with different religious dressing, all kinds of things that are going on that really reflect something that I think meaningfully shows change – but you do not, on a regular basis, see disabled people. I think that at the end of the day as a disabled person, we are still basically invisible. It’s not as bad as it was 10 years ago. It gets a little better every year.