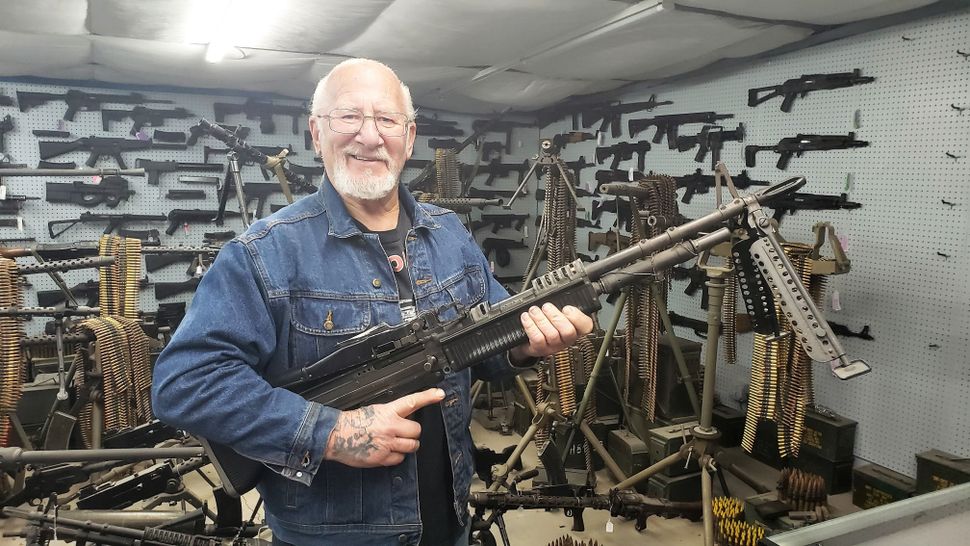 The long dirt road that leads to Dragon Land is lined with crushed cars pierced with bullet holes, with bloodied mannequins protruding from their shattered windows. “Is There Life After Death?” reads a sign along the way. “Trespass Here Tonight And Find Out.”

The idea is that anyone thinking about robbing Dragon Land, a historical military museum in Colorado Springs, or the adjacent Dragon Man gun store or the Dragon Man himself should reconsider.

Dragon Man is Mel Bernstein, 75, a gun dealer with a Class 7 Federal Firearms License. Some visitors come here to purchase guns or use the shooting range. Others come to go on the dirt bike track or to visit the 75,000 square-foot military museum which Bernstein opened 35 years ago on his 260-acre land.

I came to visit Mel Bernstein.

He founded and funded the museum and also gives tours of the place three times a week. Bernstein invested over $7 million in the museum and estimates that today it had doubled its value.

“This is the best museum in the country,” said Bernstein.

It took Bernstein close to 50 years to collect all the war paraphernalia that he displays in the museum’s 28 rooms. He started collecting after serving in Vietnam, then continued to gather from other collectors, magazine ads and even donations.

I visited the museum on Veterans Day. A few dozen veterans arrived for a personalized tour by Bernstein himself. The tour takes just over two hours as Bernstein, with his Brooklyn accent he hasn’t lost since moving to Colorado some 40 years ago, tells the stories behind the impressive displays of soldiers in original uniforms from the Revolutionary War, the Civil War, both World Wars, the Vietnam War and the most recent wars in Afghanistan and Iraq. 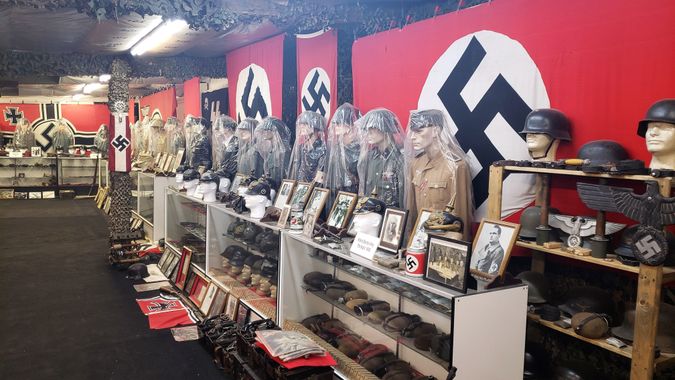 Bernstein is a colorful fellow — literally. His body is covered in tattoos — 138, by his count — and he gestured and spoke passionately while he gave the crowd a history lesson of each war or invasion. He guided us to the “Iraqi room” full of items brought back by soldiers from Saddam Hussein’s palace.

“Look at this huge hookah and this knife that can easily take your head off,” he said. “I thank all the Special Forces and the Fort Carson soldiers that for the past 27 years brought back these souvenirs to me.”

Bernstein talked without pause as we followed him from room to room of war memorabilia and displays of soldiers in various battle modes, carrying authentic weapons and sitting in half-tracks ready to shoot. Every vehicle and tank in the museum still operates, Bernstein said.

“What makes my museum so special is that 98% of everything you see here is fully operational — real machine guns, real bullets,” he said. “Everything here is authentic, no fake stuff.”

We followed him into a large room where we found ourselves surrounded by red swastika flags.

“This is the most popular room” he said.

The Nazi room displays hundreds of World War II items: Nazi uniforms, hats, winter boots that weigh seven pounds each, Nazi bicycles and one ceremonial uniform such as Hitler wore. There are Holocaust artifacts, too: Star of David patches from each concentration camp, prisoner uniforms and soap that Nazis gave to the Jews lining up for the gas chambers. 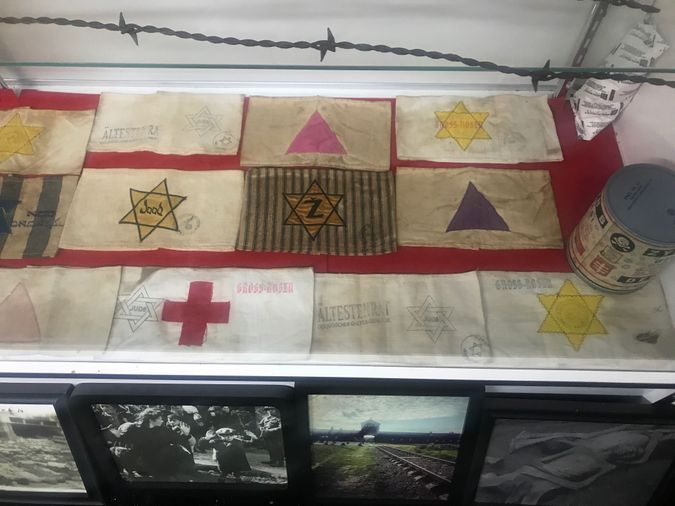 “I have over two dozen Zyklon B cans” he announced as he pulled one can out of the cabinet. He shook the can and continued: “If this opens and we breathe it, we are dead in three minutes.”

“You want to hear a story?” he asked me, “Once a rabbi came here and wanted me to give him the soap so he could bury it. He tried to convince me that I have to give it to him, but I refused. People should know what the Nazi did and each thing here tells what they had done.”

Once Bernstein had two Holocaust survivor visitors faint in this room.

“They were young girls back then and had lost their whole family in the concentration camps,” Bernstein said.

The guests were taken out and revived before they continued with the tour. They didn’t object to the display, he said, but it brought back difficult memories.

Dragon Man’s YouTube Channel brought him new fans who get to see his museum online along with his impressive car collection, including the “Dragon Motorcycle,” which he built himself, his gun store and his gun range. 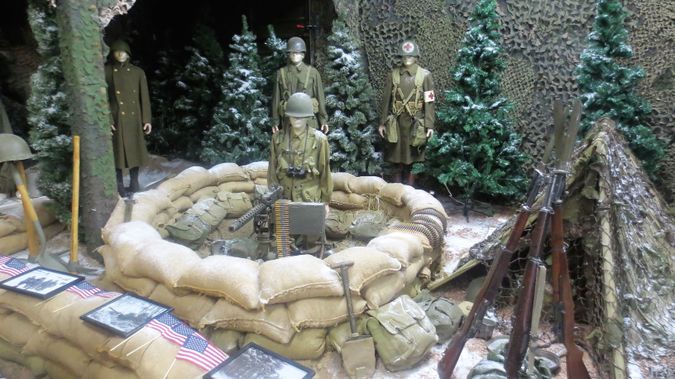 “I’ve been working since I was 13,” he said. “Most New Yorkers are workers. The last time I took a vacation was 25 years ago. Besides, I have to stay here and watch over my store and museum. If someone will break-in, by the time the police will get here, it would be too late.”

In fact, four years ago, in August 2017, four people broke into his gun store and stole 84 guns. Two of the four suspects were relations — his stepdaughter and stepgrandson. The police were able to return all Bernstein’s weapons. His stepdaughter, who was a drug addict, is still serving time.

Bernstein was married three times, divorced twice and widowed once. He has seven children but only one of them, Melissa, is helping him run Dragon Land. One day, she will take over.

In 2012, Bernstein’s second wife, Terry Flanell, was killed in a freak accident during the filming of the first episode of a new Discovery Channel reality show about Bernstein and his crew called “Dragon Land.”

Bernstein dedicated a display for his wife in the museum. Flanell was not only his wife but his business partner. She managed the books and arranged all the necessary permits, liability and compliance.

“She helped me a lot,” he said “For two years I couldn’t talk about it and I almost had gone out of business.”

What helped Bernstein deal with the loss, he said, were his work and sense of humor.

The museum is open three times a week and is closed during the winter months between mid-November until the end of March when it gets too cold inside. Bernstein is planning to expand and add some more rooms for an additional 15,000 square feet. 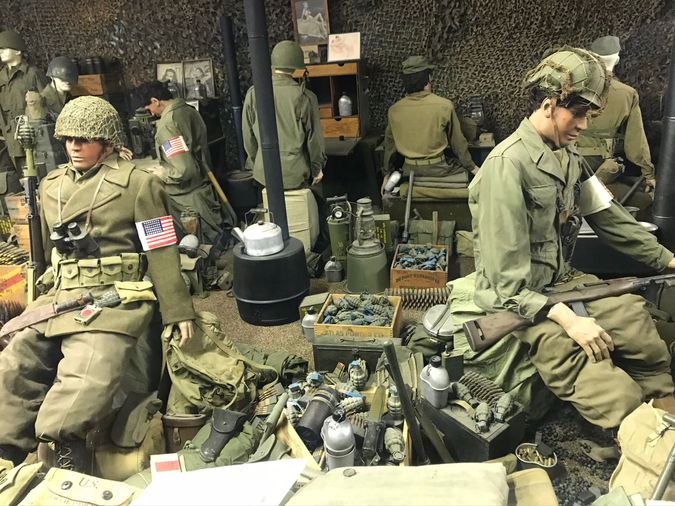 On this tour as on every tour, he made sure to ask if there were any war veterans among the guests and then proceeded to tell them, “Welcome back home.”

“When we came back from Vietnam, nobody welcomed us back, they called us ‘child killers,’” he told our group. “Everybody was against the Vietnam War. It’s important for me to acknowledge them.”

One of the last rooms in the museum is dedicated to Bernstein’s late parents, Edith and Kermit Bernstein, who died only a year after his wife. On display are many pictures of his parents and also their ashes in an urn so he feels they are still close to him. The year after they died, he lost his son Joey to cancer.

“He was a great son,” Bernstein said.

Finally, Bernstein brought us to a room straight from the 1950s, decked out with neon lights, female mannequins in poodle skirts, Coca Cola machines, vintage gas pumps and a life-sized Elvis Presley mannequin. Music from the ’50s and ’60s plays in the background.

Bernstein said he misses those days, and he gets to relive them every time he steps into the room. He has some of these mannequin girls back at his home to keep him company.

Would he ever consider selling his museum, I asked.

“Oh no, never” Bernstein said, “I don’t need the money. I make a lot of it in my store. People come here from all over the world. Veterans are doing reunions here. I’m happy with what I’m doing. This is not just a museum, it’s my home.”