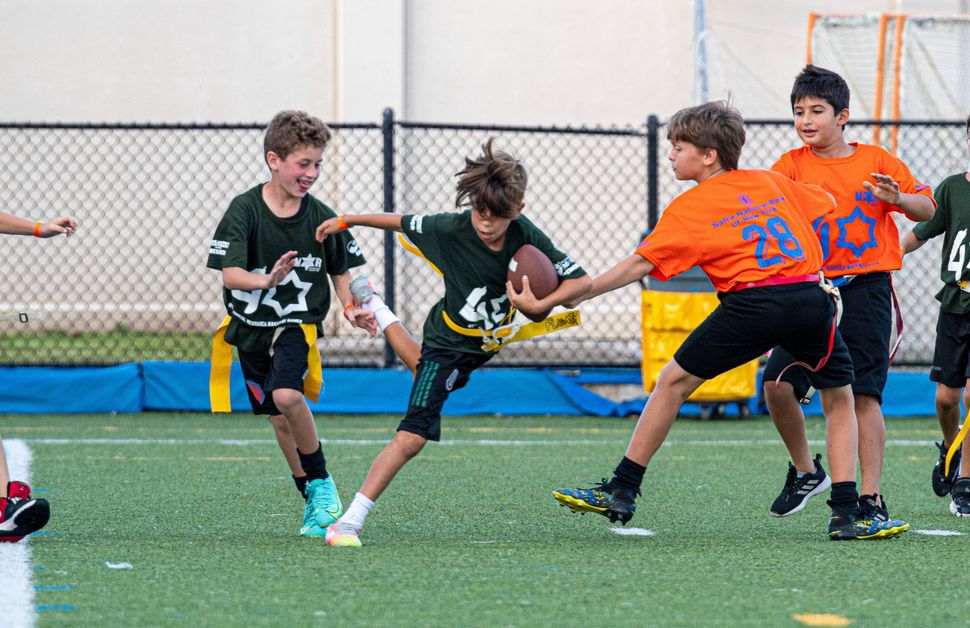 Flag football at the Hebraica Maccabi Games By Markos Leave/tufotografo.com

Last Sunday, hundreds of children in bright team colors surged across a sun-drenched Miami sports field as their families from Venezuela, Colombia, Peru, Mexico, Argentina and Brazil cheered them on.

They were there for Miami’s annual Hebraica Maccabi Games, which for four decades has brought together Jewish immigrants from Latin America in a unique, intertwined celebration of community, culture, family, Judaism, and, yes, athletics. 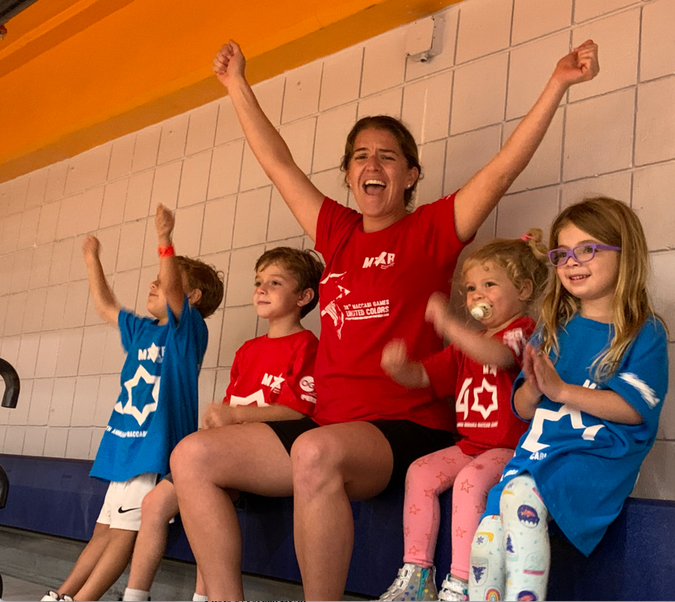 The Games, which draw some 2000 participants and still more to watch and enjoy, are held over 10 days in late November at the Michael-Ann Russell Jewish Community Center, a thriving JCC largely thanks to the Hispanic immigrants who have invigorated this North Miami Jewish community.

In these Maccabi Games, they reconnect with their country of origin and the tight-knit Jewish communities where generations lived, went to school, worshipped, married and raised families together. They unite with fellow Jews from Latin America. And they teach their American-born children about their heritage.

“It’s like a melting pot,” said Monica Sichel, a passionate volunteer and fundraiser for the Games who heads the team for her native Venezuela. “We are one big community. But we each add our own beautiful flavor.” 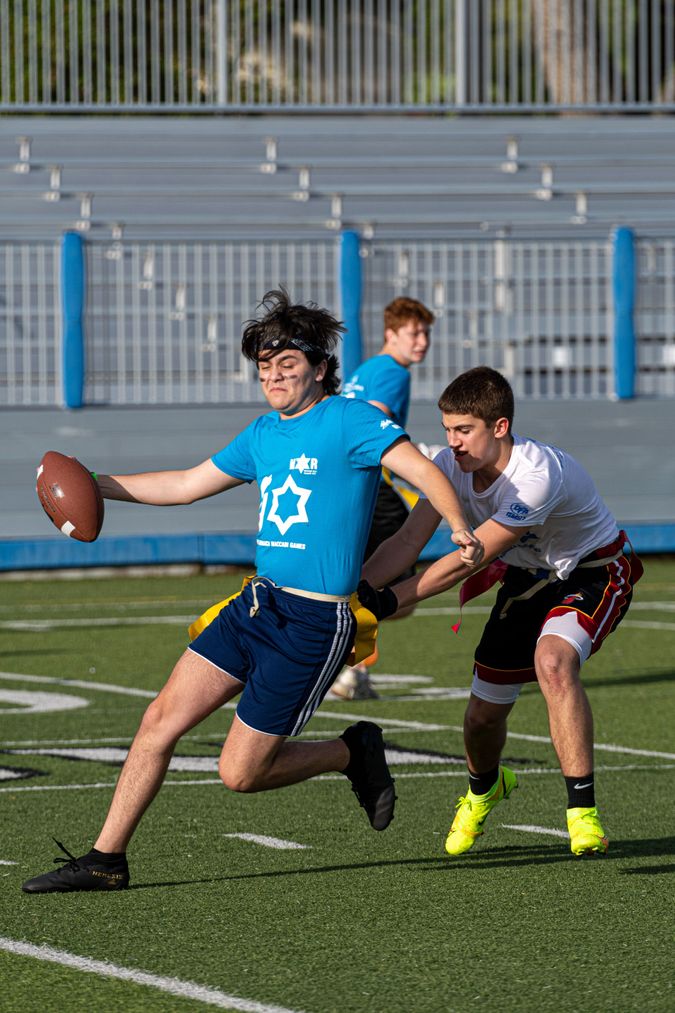 Touch football at the Hebraica Maccabi Games By Markos Leave/tufotografo.com

Marleny Rosenberg, another Venezuelan immigrant who has worked on the Games since she came to Miami in 2000, heading them since 2009, said the event felt like home. “With the Games I could reconnect with Venezuela and for 10 days you would have everyone in one place,” she said. “I am teaching my kids who are born in the U.S. but play for Venezuela. It’s all about them remembering where they come from, remembering their roots.”

A handful of Colombian immigrants started the Games in 1982, continuing an annual tradition that brought together Jews from across Colombia in a national version of the international Maccabi Games held in Israel every four years. “That’s how we socialized and met other Jews,” said Diani Azout, of Colombia, who now runs the Miami Games with Rosenberg. “Here it was a way to re-experience what we had in Colombia. We were all over Miami and South Florida. We would never have seen each other without the Games.”

From 200 people on a scruffy field, the Games have grown to a massive event with approximately 2000 participants, from pre-schoolers to grandparents, competing in soccer, basketball, volleyball, flag football, tennis, and more, plus gentler games like golf and dominoes, filling the sprawling grounds of the JCC and the adjacent Scheck Hillel Community Day School.

Still more people come to watch, cheer on friends and family, or volunteer. Competitors are divided into national teams, for Colombia, Venezuela, Argentina, Brazil, Mexico, Peru, Israel, and the U.S.; and then into age groups. 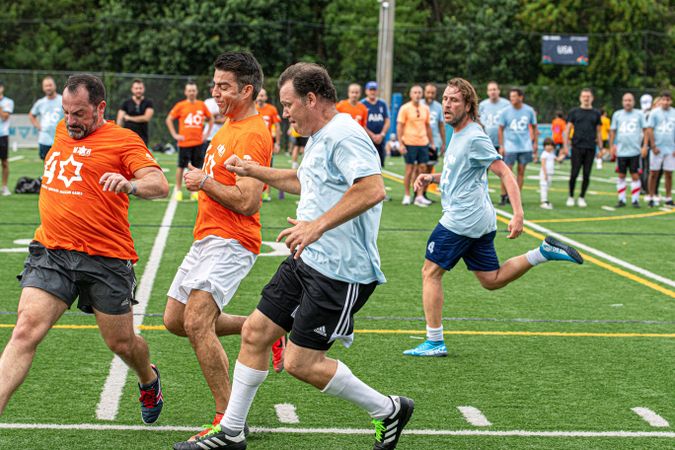 Soccer at the Hebraica Maccabi Games By Markos Leave/tufotografo.com

The event is a major one for the Michael-Ann Russell JCC, with registration fees and sponsorships, most from companies run by Hispanic Jewish families, projected to bring in approximately $400,000 this year. The money supports not just the Games, but JCC scholarships and programs.

At a reception last Saturday night the founders celebrated years of friendship and the tradition they’d created.

“This guy here did the second Games,” Besso proclaimed. “His father at Capital Bank was our first sponsor.”

Halberstein grinned back. “He had four or five Colombians, I had me and my wife.”

Halberstein and his family left their tiny, close-knit Jewish community soon after a military dictatorship took over Peru in 1975. “Now, thanks to Hugo Chavez, we have all these orange shirts,” added Besso, referring to the color the Venezuelan participants wear. Now 71, Besso’s eight grandchildren, ages 6 to 19, all play in the Games. “No other Jewish community has an event like this,” said Rully Moskowitz, Colombian-born co-chair of the Games.. “This joins us all together. It creates a bond that is really important.”

People were doubly emotional to be able to celebrate, not just the 40th anniversary, but the chance to gather after the pandemic kept the 2020 Games and other gatherings online.

“People can’t wait to be here,” said Alan Sataloff, chief executive officer of the Michael-Ann Russell JCC, at Saturday’s reception. “We are rebuilding Jewish community after the pandemic.”

Outside, hundreds of people filled the plaza around an elaborate stage for a much-anticipated opening ceremony, which a rainstorm had delayed from Wednesday. Twice rain sent people running for shelter, and twice they came back. They cheered wildly for a parade of national teams: Argentines whooping in blue and white soccer jerseys; Brazilians pounding on giant batucada drums; Mexicans in Day of the Dead-style make-up.

Parents carried tiny children on their shoulders, and older kids waved national flags. The dance team rehearsed a number swirling those flags to “Carnival del Barrio” from “In the Heights.” Teenage girls sang the U.S. and Israeli national anthems.

Miami-born Julia Jerusalmi, 12, was there in a green and yellow jersey for her parents’ native Brazil, to dance and compete in soccer, kickball and volleyball. “I love it,” she said. “I love the people. I love knowing everyone.”

The following day, Sunday, was the biggest day of the Games. Latin American accents echoed around soccer fields and basketball courts: singsong Italian-inflected Argentine Spanish, the choppy rhythms of Mexico, the smoother tones of Venezuela and Colombia, melodic Brazilian Portuguese. Adults and very young children mostly spoke Spanish. Sweating dads yelled furiously from the sidelines of a Mexico-Venezuela soccer game of 7 and 8 year olds, shouting “Tiralo! Llevalo! Mira la pelota_!” as their children raced and scrambled for the ball.

But the countless clumps of excited, leggy girls and lanky, awkward-arrogant boys, in a rainbow of colored T-shirts for different countries, all spoke English.

The food stands had standard American burgers and chicken fingers, but also Venezuelan arepas (a savory corn cake stuffed with cheese), Argentine choripan(bread and sausage with chimichurri), mango with lime and salt, and Mexican paletas (popsicles) in flavors like dulce de leche and passion fruit.

Monique Ohayon watched her son, 46, play soccer for Venezuela against Argentina. Born in Morocco and raised in Venezuela, she came to Miami to be with her three grandsons, now 19, 18, and 13, who’ve played for the Venezuelan team since they were tiny. Basketball at the Hebraica Macabbi Games By Markos Leave/tufotografo.com

“They’re American, but they play for Venezuela,” she says. “But we’re all American now.”

That’s certainly true for the younger generation, who increasingly want to play with their friends instead of a country they never knew. Some parents shrug this off. Others are conflicted. “Once my daughter said ‘I’m playing for Peru, because all my friends are’,” said Azout. “And I said ‘Over my dead body’. But now it’s more about sports and friends than countries.”

Yet the Jews who created these Maccabi Games hope their children will remember their origins as they carry on this new Jewish tradition. “What makes you who you are?” said Sichel. “I’m proud of being Jewish – it shapes who I am. I’m proud to be Venezuelan. I am American. We make sure our kids remember that.”