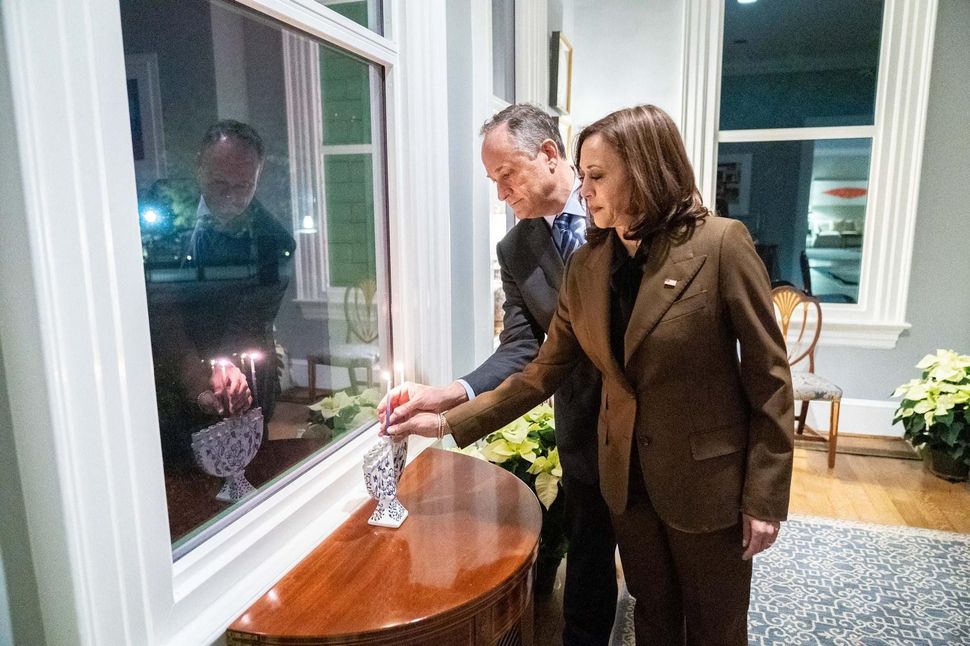 Second Gentleman Doug Emhoff and his wife, Vice President Kamala Harris, lit a menorah in a window of their official residence.

This Hanukkah, as Vice President Kamala Harris and her husband, Doug Emhoff, the nation’s first Jewish spouse of a president or vice president, light their menorah, they are honoring a man famous for taking care of his workers.

Aaron Feuerstein died of pneumonia last month at the age of 95, some 26 years after his factory in Massachusetts, Malden Mills, burned down. Instead of letting employees go without pay while the factory — which made sheets and other textiles — was rebuilt, he spent $25 million to keep them on the payroll, with health benefits. For his loyalty to his employees, President Bill Clinton honored Feuerstein during his 1996 State of the Union address.

Harris and Emhoff paid tribute to the so-called “mensch of Malden” by lighting his personal menorah in the vice president’s official residence, a few miles from the White House.

Feuerstein attributed his act of generosity to his study of the Talmud. “I’m not throwing 3,000 people out of work two weeks before Christmas,” he is quoted as having said at the time.

The menorah found its way to Washington after a White House employee reached out to a Jewish organization in Massachusetts.

“The vice president was looking for a unique menorah to light this Hanukkah,” said Marika Feuerstein, Aaron Feuerstein’s granddaughter, who hand-painted it. Learning of the textile magnate’s legacy, the White House official got in touch with Feuerstein’s family, which was happy to loan the menorah to the second family.

Aaron Feuerstein had several menorahs, but the one that his granddaughter painted in 2016 and given to him as a gift is particularly treasured by the family.

“I thought he would love it because he loved things that I made and things that had personal value,” she said. “We would light it every Hanukkah.” 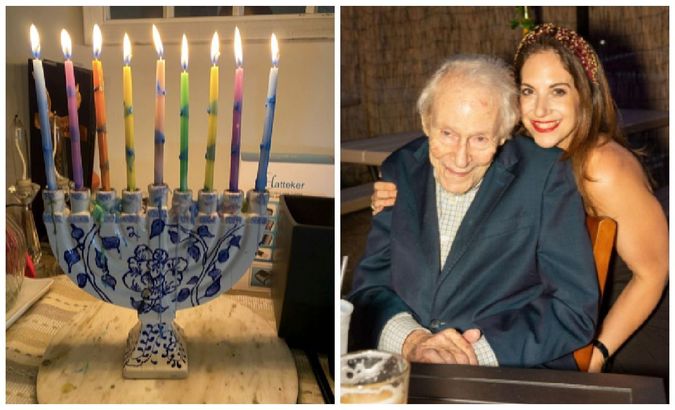 Aaron Feuerstein and his granddaughter, Marika, who painted a special menorah for him. (Courtesy Marika Feuerstein).

The menorah is painted with a blue and white rose and a vine, which was meant, Marika Feuerstein said, to serve as “a symbol of what my family and what my grandfather has gone through.”

“We’ve had a lot of hardship, but at the end of the day things blossomed,” she added.

A source familiar with the search for the menorah said Harris and Emhoff were drawn to Feuerstein’s because of his commitment to his employees. “He was a hero to workers,” the source said.

Marika Feuerstein, who described her grandfather as a “very proud Democrat,” said it’s an “incredible honor” for the second family to be using the menorah she painted while her family grieves his death.

“A menorah is a vessel for light, especially in darkness. This has been a dark time for our family,” she said. “To see his menorah in the vice president’s residence means his light is still shining.

“One light sparks another sparks another, and that’s what we’re supposed to do as individuals,” she said. “My grandfather, one hundred percent, is a symbol of the menorah.”