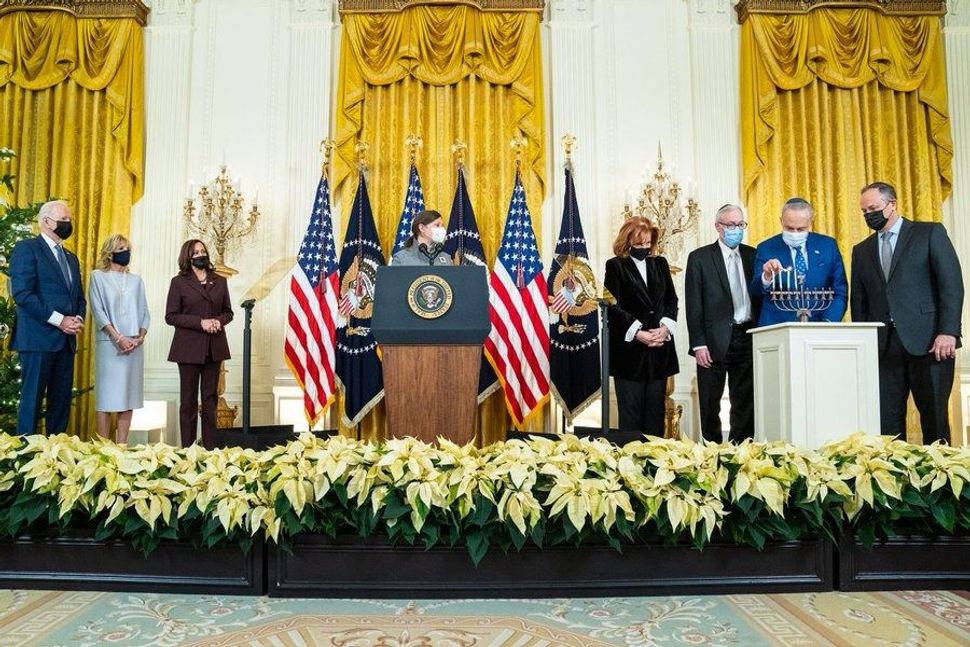 Absent were the bands and choir performing traditional holiday songs. Notably missing, too, were the signature lamb-chop trays and assorted latkes. And in the pandemic-limited crowd of 150, dotted with yarmulkes with the presidential seal, a lone member of the Hasidic community of Borough Park, Brooklyn — a community that voted in large numbers for Donald Trump and who had an open door in his White House — stood out.

Wednesday evening’s affair in the East Room of the White House was a very different Hanukkah party than all that have come before it in a tradition begun in 2001. It was a more intimate affair, due to concerns about the coronavirus, and for many of the attendees, it felt more personal.

“This is a White House tradition,” President Joe Biden noted at the beginning of his remarks. “But for the first time in history it is a family tradition.”

He was talking about the family of Vice President Kamala Harris, whose husband. Doug Emhoff, is Jewish — a first. It was also the first time that the menorah — designed by the famous Holocaust survivor Manfred Anson — was lit by a Jewish Senate Majority Leader, Chuck Schumer.

“It felt deeply moving and spiritual,” said Randi Weingarten, president of the American Federation of Teachers and the wife of Rabbi Sharon Kleinbaum of Congregation Beit Simchat Torah in Manhattan. 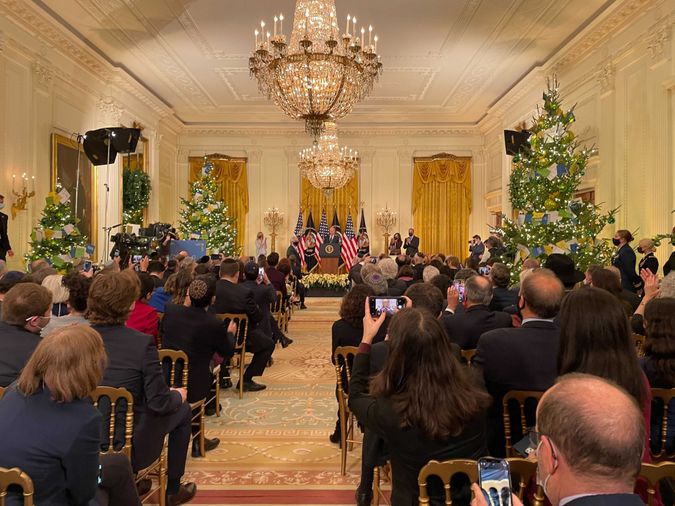 Susie Stern, founder of Jewish Women for Joe, said she had told the president before the event, “Out there is a room where everybody loves you.” She was among the candle-lighters, alongside Emhoff, Schumer and Rabbi Aaron Glat, joked that she was glad she didn’t burn the place down. “Schumer told me, “Don’t drop it,’” she said.

The president’s remarks were relatively informal — he said Glatt, a doctor and associate rabbi at the Young Israel of Woodmere, N.Y., had told him that Hanukkah is Thanksgiving on steroids.

Biden acknowledged Jewish members of his cabinet as well as Israel’s new ambassador to the U.S., Michael Herzog, and Deborah E. Lipstadt, whose nomination as antisemitism envoy has been blocked by Senate Republicans. Then he repeated his favorite Golda Meir story in detail, reiterated his commitment to fighting antisemitism, and said he had recently been bragging about his many trips to Israel to members of his staff.

“And then, all of a sudden, I realized, “God, you’re getting old, Biden,” the president said to laughter.

“You can always build back better, perhaps, build back brighter,” Biden added, connecting the title of his signature infrastructure bill to the holiday’s story of rededicating the Temple and to the resurgence of the American Jewish community after the Holocaust.

Rabbi Kleinbaum said that she was “deeply moved” to be back at the White House after four years of Trump and “to be celebrating the deepest values of Hanukkah by the president of the United States. 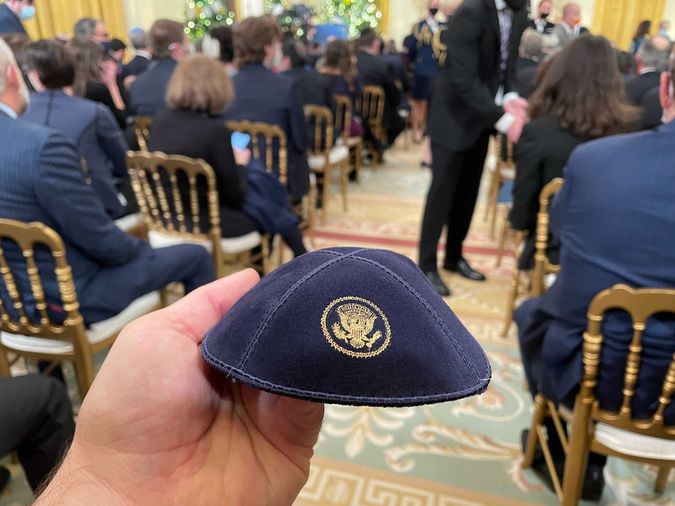 a yarmulke with the presidential seal at the White House Hanukkah reception on Dec. 1, 2021 Image by Jacob Kornbluh

Norm Eisen, a former ambassador and a counsel in the first impeachment trial of President Trump, said Emhoff’s role was the highlight of the event. He said that while he missed chomping on the kosher lamb chops, he was gratified to “have the zechus to have a member of the mishpucha, of klal yisrael be part of the celebration,” using Yiddish and Hebrew terms for honor, family and the Jewish people.

The event was organized by Chanan Weissman, the White House Jewish liaison, whose fourth child was born on Monday night. “Tonight we get to celebrate Chananukah,” Emhoff joked.

William Daroff, CEO of the Conference of Presidents of Major American Jewish Organizations, said it was meaningful that the event took place despite the pandemic, to celebrate “Jewish continuity and the integral role Jews play in this citadel of freedom.” Daroff’s predecessor, Malcolm Hoenlein — who has attended every White House Hanukkah event going back to former President Jimmy Carter except for last year’s — said that the fact that most powerful country in the world designates a day to celebrate the Jewish holiday is “a level of acceptance that is of great significance.”

David Schwartz, a member of the Hasidic community and a Democratic district leader in Brooklyn, said he “felt honored,” as the grandson of Holocaust survivors, to be at the annual event for the first time.

After about an hour of speeches and schmoozing, guests took selfies with Biden on the rope line. There were sugar cookies decorated with the presidential seal at the exit.

Outside, masked and socially distanced, a minyan including Rep. Ted Deutch of Florida assembled outside for the evening prayers.