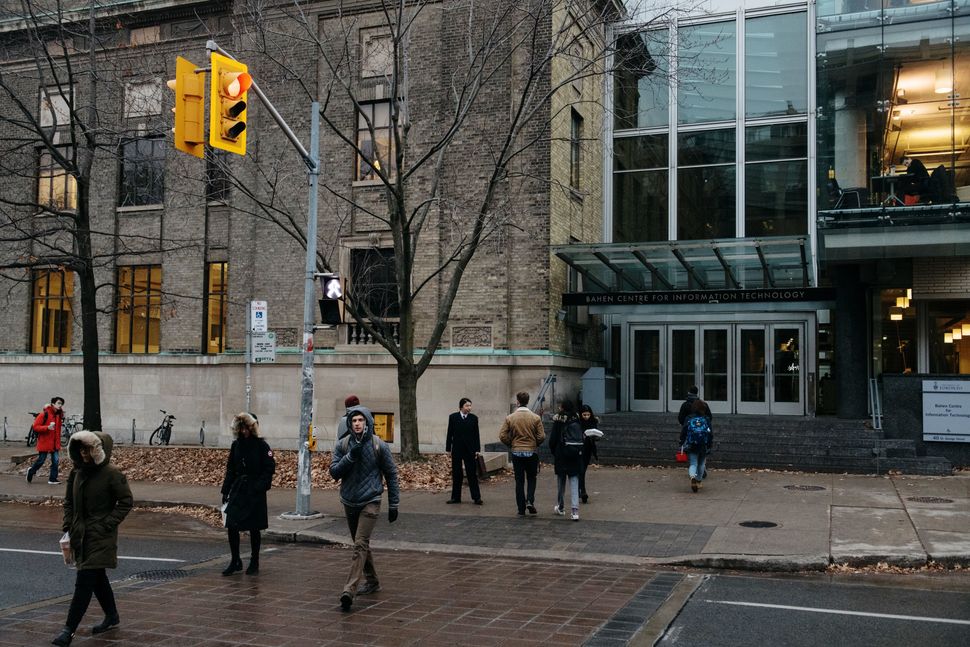 Students walk through the University of Toronto campus in Toronto, Ontario, Canada, on Tuesday, Dec. 11, 2018. Photo by Getty Images

When the University of Toronto announced that it had accepted all the recommendations of a campus working group on antisemitism, much of the Canadian Jewish establishment reacted with frustration and anger.

“This report is beyond disappointing,” Michael Mostyn, chief of B’nai Brith Canada said in a statement. Friends of Simon Wiesenthal Center, a group based in Toronto, said the report showed “a lack of commitment and courage,” while StandWithUs Canada said it used “misleading framing.”

Canada’s top-ranked university committed itself last Wednesday to both practical steps and structural changes to accommodate Jews on campus and combat anti-Jewish bigotry — from ensuring the availability of kosher food and not scheduling major events on Jewish holidays, to adding antisemitism to the portfolio of its Anti-Racism and Cultural Diversity Office.

But the anger stemmed from the school’s decision to reject a controversial definition of antisemitism that proponents say is necessarily to shield Jewish students from bigoted activism aimed at Israel.

“External Jewish groups are hugely disappointed that the IHRA definition was not accepted,” said Anna Shternshis, a member of the working group, referring to language promoted by the International Holocaust Remembrance Alliance.

The working group’s decision not to adopt the definition is a notable loss for Jewish organizations that have worked assiduously in recent years to convince universities, governments and other institutions to accept the definition as a first step in responding to rising rates of antisemitism.

Progressive Jewish organizations and academics who have banded together over the past year to resist the IHRA definition, which they deem a tool to target Palestinians – claimed the university’s decision as a win.

More than 300 Jewish scholars signed onto the Jerusalem Declaration on Antisemitism in March, endorsing a definition that broke with the IHRA language, which suggests that holding Israel to a double standard or opposing a Jewish state in the region is antisemitic.

The disagreement over how to define antisemitism has dovetailed with controversy over the level of discrimination that Jewish college students in the United States and Canada are actually facing.

B’nai Brith Canada, one of the groups that expressed anger at the university report, released an accounting of antisemitism at the school last year that painted an alarming picture. Its list of incidents included antisemitic graffiti, a professor who encouraged her students to conduct a “Jew count” of faculty members, as well as several votes by student associations on campus to boycott Israel.

But Independent Jewish Voices Canada, which has campaigned against the IHRA definition, claimed in its own assessment last year that the B’nai Brith consistently uses a methodology that overstates the level of antisemitism to fit a political agenda that includes staunch support for Israel.

Shternshis, who runs the Centre for Jewish Studies on campus, said that rising levels of antisemitism in society were reflected on campus but that concern over Israel activism had earned the school an undeserved reputation as a hotbed of antisemitism.

“These discussions are not as central to university experience as many Jewish parents think,” said Shternshis, whose son is a student at the University of Toronto. “What’s more troubling to me is that because of this growing reputation – ‘this university is a good but becoming antisemitic’ – Jewish students choose universities of lesser quality.’” 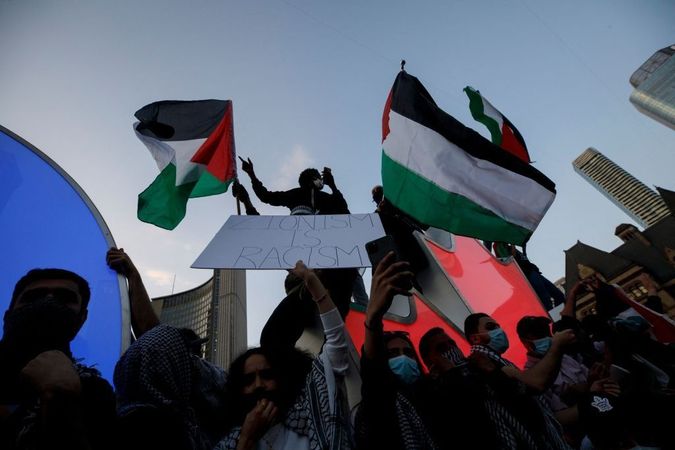 People wave flags and chant during a demonstration to voice support for the people of Palestine, at Toronto City Hall in Toronto, Ontario, Canada, on May 15, 2021. Photo by Getty Images

Limited controversy – or a trend?

The Toronto working group’s report outlined several examples of antisemitism, and stated that bigotry toward Jews sometimes manifested in relation to Israel and that anti-Jewish stereotypes were often aimed at “Zionists.” But it declined to endorse any definition of antisemitism, stating that there were “sharply divergent views” among Jews on campus and that as a university it could not adopt language that could impinge on free speech.

Uncertainty around the definition helped lead to its rejection

Arthur Ripstein, a legal scholar at the school who chaired the antisemitism working group, declined an interview request, but the report noted that in addition to Hillel and other mainstream student groups, his team met with representatives from Independent Jewish Voices.

Ripstein said in a press release that his aim was to address antisemitism on campus “in ways that are sensitive to the particular position of the university as a place of learning and as a place of academic disagreement.”

Yet despite the University of Toronto’s decision to not to strictly delineate what constitutes antisemitism, the IHRA definition continues to be widely endorsed by most major Jewish organizations in the United States, and despite resistance at least a dozen American universities have adopted it this year alone.

Mark Weitzman, who shepherded the definition through the Holocaust remembrance group, said its defeat at the University of Toronto underscored IHRA’s ongoing dominance.