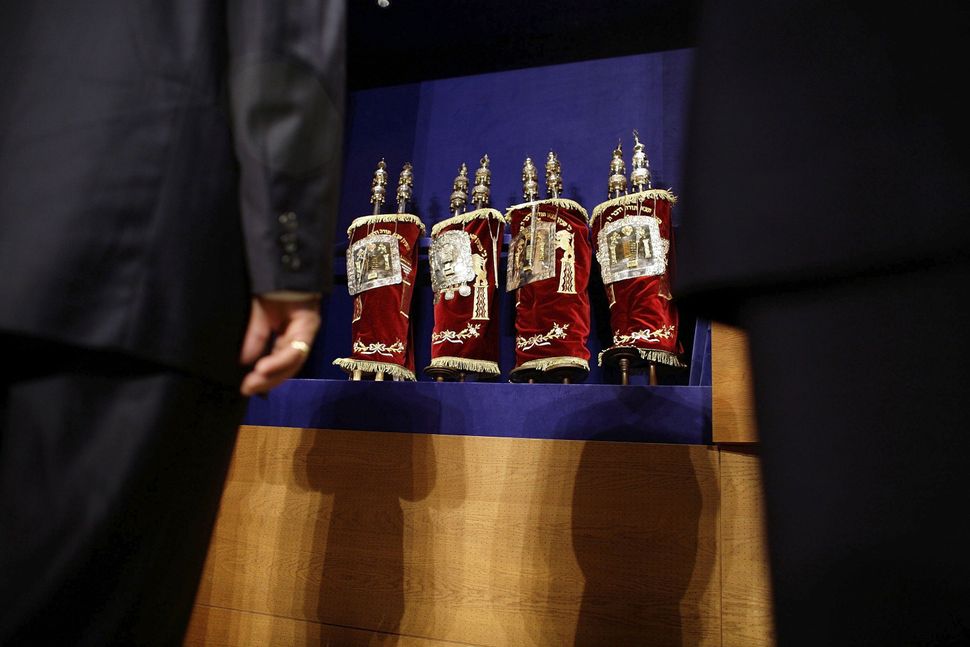 Torah scrolls are seen in the opened scroll cabinet at the rehearsal for an ordination in the New Synagogue on September 14, 2006 in Dresden, Germany. Photo by Getty Images

The association that oversees Reform rabbis detailed problems with the way it handles accusations of sexual misconduct and other ethical violations in an extensive report released Wednesday.

The report found that despite numerous revisions since its code of ethics was created in 1991, the Central Conference of American Rabbis has often failed to effectively investigate and sanction rabbis and in at least two cases allowed renowned rabbis accused of predatory sexual behavior to continue working in movement institutions.

“This report reveals that there is much work to be done.”

“Rabbis have a sacred responsibility to the Jewish community and should be held to the highest ethical standards,” said Rabbi Mary Zamore, director of the Women’s Rabbinic Network, which has pushed the Reform movement, the largest stream of Judaism, to tackle discrimination and sexual harassment for decades. “This report reveals that there is much work to be done.”

The CCAR report is part of a broader societal reckoning over sexual misconduct that began four years ago with the #MeToo movement. It follows the release last month of a similar – and more explosive – investigation from another major Reform movement institution, Hebrew Union College-Jewish Institute of Religion. A report from the Union for Reform Judaism, the congregational arm of the Reform movement, has not yet been completed.

Hara Person, chief of the CCAR, said that her organization is in a unique position because it is responsible for disciplining rabbis who breach ethical norms but does not have hiring or firing power, which remains with individual synagogues and other institutions. Until changes were made earlier this year, Reform rabbis accused of misconduct could terminate CCAR investigations by resigning from the group.

“It’s a complicated place to sit,” Person said in an interview.

In perhaps the most notable case examined in the CCAR investigation, which was compiled by attorneys from Alcalaw LLP, investigators found that the organization’s ethics committee received a letter in the late 1990s from a rabbi accusing Alfred Gottschalk of sexual misconduct. Gottschalk, who led HUC-JIR for nearly three decades, was revealed in last month’s report on that institution to have sexually harassed and assaulted women throughout his tenure there.

But despite receiving the letter, which described allegations against Gottschalk from three people and a request that the CCAR investigate, its ethics committee failed to formally look into the allegations at least in part because no official complaint had been made. Gottschalk died in 2009.

The CCAR did take action in a second case involving Sheldon Zimmerman, a rabbi who succeeded Gottschalk as president of HUC-JIR, after a woman reported that he had engaged in a sexual relationship with her while she was a minor. Zimmerman resigned from the college and was ultimately suspended from the CCAR for four years, but both institutions said only that he had engaged in a “personal relationship” that had violated the ethics code without mentioning that it had involved an underage member of his congregation.

Zimmerman went on to lead Birthright Israel and Temple Emanu-El, a major Reform congregation in Dallas, which fired Zimmerman last May after more details about his past behavior came to light. He also served as a counselor for CCAR’s ethics committee. He did not immediately respond to a request for comment Wednesday.

The report’s authors found that the CCAR currently allows rabbis to be sanctioned privately, and congregation leaders expressed frustration that the organization does not always inform Reform synagogues that a rabbi they are considering hiring has been accused or even found guilty of misconduct.

“We do not agree that reprimand and censure should be confidential from a synagogue board,” one group of lay leaders told investigators. “For there to be a sacred partnership, it starts with the hiring process.”

And while the report found that those who served on the ethics committee were committed to their work and acted in good faith, it noted widespread distrust of the institution among Reform Jews.

“At our synagogue, we have a lot of cynicism about the CCAR,” one congregational leader, who was not identified, said in the report. “It is thought of as a union for rabbis. I think it is a totally flawed process because it is a union policing its own people.”

Other CCAR members said there was a perception of the organization as “good old boy’s club” and that it was difficult to police misbehavior between colleagues who know each other well: “I don’t know how to do this work when everyone was bunkmates in camp,” one rabbi said.

Investigators, who were led by former sex crimes attorney Rena Paul, recommended that CCAR rely less on rabbis to investigate claims and counsel peers accused of misconduct. The report also called for more collaboration between the major Reform movement institutions, including the Union for Reform Judaism.

“The CCAR report’s findings are troubling and require profound changes in our Movement,” the URJ said in a statement Wednesday. “The Union for Reform Judaism is committed to working with our partner Reform Jewish institutions to address these findings immediately and thoroughly.”

Person and other CCAR leaders said in a letter accompanying the report that they would adopt many of the report’s recommendations, including instituting a process to repair past harm, making changes to the ethics code and asking a committee to begin proposing changes based on the investigation that can be implemented over the next two years.

Person said that some of the recommendations would be more difficult to adopt because they required funding that does not currently exist. Overall, Person said she had mixed feelings about the report.

“There’s a real feeling of hopefulness about our path forward because there are so many helpful, concrete recommendations for us to change and grow and do repair,” she said. “And at the same time, I do feel really deep pain and empathy for the people who have been hurt by this system.”