She defended disgraced author Chaim Walder. Now a revered rebbetzin is facing a backlash of her own. 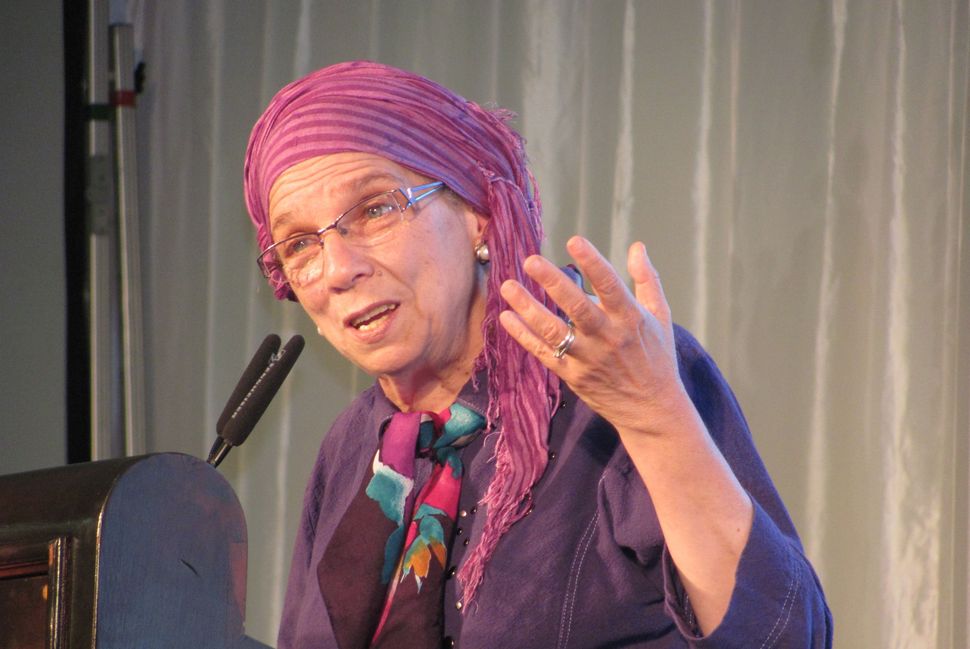 Rebbetzin Tziporah Heller speaking in Jerusalem in 2012. Courtesy of Wikicommons/Yoninah

The recent revelation of acclaimed children’s author Chaim Walder’s decades of sexual abuse has prompted a reckoning in the Orthodox community, or at least calls for one.

It also prompted a prominent Haredi rebbetzin and scholar, Tziporah Heller, to write an impassioned Facebook post decrying those who shamed Walder and vilifying the reporter who first wrote about the women who have accused him of molestation and rape. Heller described the Haaretz journalist as a “supercilious” and dishonest lapsed Orthodox Jew — and appeared to blame him for Walder’s Dec. 27 death by suicide.

She also seemed to downplay the alleged victims’ trauma, writing that Walder — convicted in a Haredi religious court in Israel after the judges heard testimony about 22 victims — “lost his balance.”

Her Jan. 2 post, and its warnings to Orthodox Jews to keep ugly stories out of the public eye, then drew a backlash of its own, and provided a window into the way that the Haredi community is grappling with sexual abuse. Traditional ideas rooted in the Biblical prohibition of talebearing are butting up against more notions about accountability that are no less Biblical but much less talked about.

The post drew hundreds of angry comments from Heller’s followers, many of whom have non-Orthodox backgrounds themselves.

“Now you too have blood on your hands,” wrote one woman, “as an enabler and victim blamer in this case.”

Heller, who did not respond to requests for comment, has written two Facebook posts since, neither of which seemed to placate those upset with her. On Wednesday, she wrote of Walder, “the deeds that were done were evil.” In a lengthier post the next day, she admitted she hadn’t been fully informed about Walder. She recalled how lovingly the author, a very public figure who was also a therapist, seemed to write and care for children, and called herself a victim of “Say it isn’t so syndrome.”

But she did not qualify her criticism of the journalist, Aaron Rabinowitz, whose reporting (along with colleague Shira Elk’s) brought allegations of Walder’s abuse to light.

“The reason that I don’t blindly trust anti-religious journalists is not because they don’t wear the right kippahs or that the stories they choose are juicy,” she wrote. “Their policy of denigrating the religious community (and not only the chareidim but also the ‘settlers’ and any one else who is not them) is not a deep secret.”

In Haaretz’s report, which was initially published in Hebrew on Nov. 12, several women came forward with sexual abuse allegations against Walder, including one who was 12 when the abuse began and two who were 15. At least one first encountered Walder as a patient.

Heller, who has taught for 40 years at Neve Yerushalayim, a women’s seminary which primarily attracts those from secular Jewish backgrounds, is revered for her ability to make lofty Torah concepts — in particular Orthodox views of gender and sexuality — accessible to learners without a traditional Jewish education.

Responding to her initial Facebook post, some of Heller’s followers tried to reason with her, defending the journalists or speaking up for the victims. More than one commenter noted that Walder had used the books Heller called “sensitively written” to groom his victims. “Gaslighting 101,” one wrote. “With women like you saying these things, sexual predators will forever roam free in the community.”

The prevailing tone among the more than 750 comments, however, seemed to be disappointment.

“I have so much respect for you and love your classes and books,” one woman said, prefacing her point that Walder’s serial abuse was too extreme to be cast as mere imbalance. “I’m writing this with the hope that you and all Jewish leaders and role models can be a part of protecting our children, and take a clear and strong stance against any abusers in our community. Thank you for all you do for am yisrael.”

The Haredi Orthodox world is insular by design, and reporting that could portray the community or its members in a negative light is often characterized as slander — which is forbidden by the Torah — rather than as an instrument of accountability, or even merely as a reliable source of information.

Acting upon information that could prevent harm is, in fact, commanded in the same verse in Leviticus that forbids lashon hara, or slander: “Thou shalt not go up and down as a talebearer among thy people; neither shalt thou stand against the blood of thy neighbor.”

But while the first half of the verse has been expounded upon by rabbis for millennia and is taught religiously in Jewish schools, the latter half is seldom taught as a counterpoint. Instead, it is mostly used today in the context of preventing genocide.

Therefore, the journalists who broke the Walder story that the Haredi community now widely acknowledges as fact remain the subject of contempt.

At Walder’s funeral, a Haredi lawyer called Rabinowitz “a little vicious reporter,” adding, “You sucked his blood. You murdered him as far as I’m concerned. You and your group.”

Meanwhile, trusted Haredi publications like HaModia — where Heller is a columnist — and Yated Ne’eman generally elide stories of sexual abuse. Walder’s recurring column in Yated was pulled after the Haaretz article came out with no explanation; after his death, he was reportedly described in Yated’s pages as “the righteous departed of blessed memory” and as “a man of education and good deeds” who was “taken away in his prime.”

Asher Lovy, director of the nonprofit Za’akah, which combats child sexual assault in the Orthodox Jewish community, said that these newspapers’ tendency to sanitize or ignore stories of clear-cut abuse discourages victims from coming forward.

For survivors of assault, “There’s no media to talk to,” Lovy said. “You literally cannot tell your story.”

That may be changing. Many Haredi Jews are discussing the Walder case more openly than community leaders may like. Some English-language Haredi blogs have also been commenting freely on his abuse and took the sides of his victims, Haaretz reported.

The response to Heller’s post on social media, and the rebbetzin’s eventual qualifying of her words, may indicate a Haredi community warming to candor about sexual misdeeds.

But Lovy is not optimistic.

He said Za’akah had given up on getting sexual abuse education and reporting standards enacted in the Haredi school system. Instead, the organization focuses on providing direct services to victims and lobbying for laws like New York’s Child Victims Act, which has yielded some 150 lawsuits against Jewish organizations.

“They know full well that they would never, ever, do anything about sexual abuse unless we were pushing from the outside,” Lovy said of Haredi leadership. “And they resent that.”

She defended disgraced author Chaim Walder. Now a revered rebbetzin is facing a backlash of her own.