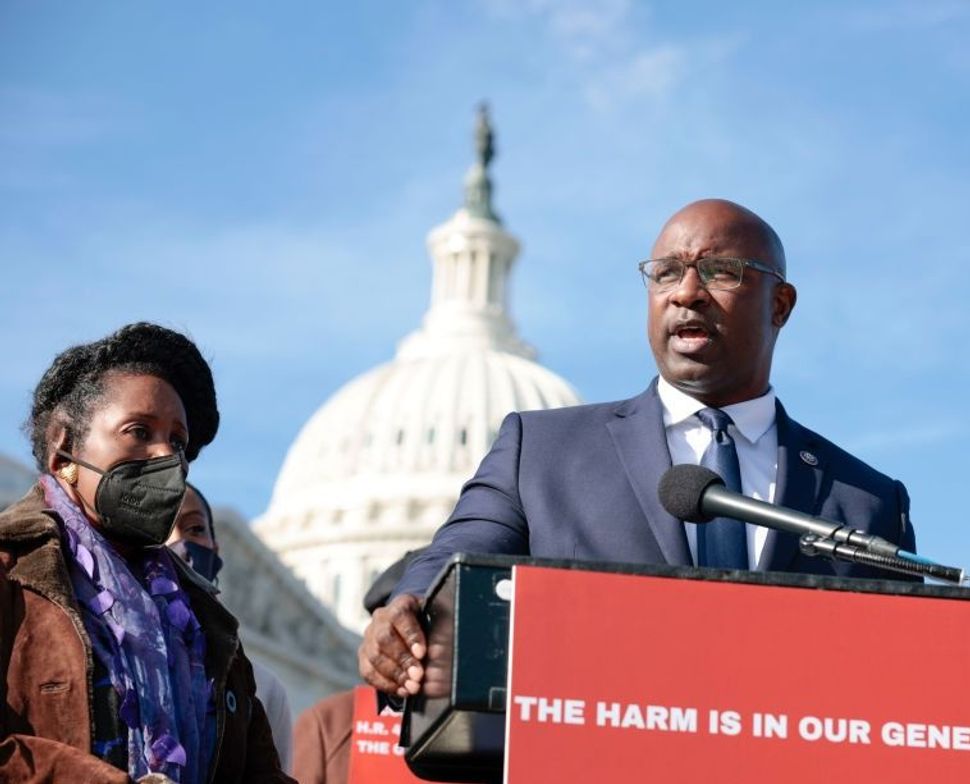 Jamaal Bowman, a first-term congressman from New York, has earned the backing of a local Jewish progressive group in his re-election bid this year amid fierce criticism from his left-wing and Socialist allies over his support of Israel.

The Jewish Vote, formed in 2018 by leaders of Jews For Racial & Economic Justice (JFREJ), made the decision to re-endorse Bowman in New York’s 16th congressional district following a rigorous discussion with its members last week.

“In a time when our democracy is at stake, we must recognize that Congressman Bowman is one of our best fighters,” Rachel McCullough, the Jewish Vote’s political director, told the Forward. “He doesn’t mince words when it comes to authoritarianism and white supremacy, and he’s going to be indispensable in the coming years.”

Bowman, whose district spans parts part of Southern Westchester County and the Bronx — including a large Jewish population in the Riverdale section of the borough — has taken an approach to Israel that is more nuanced than that of his progressive allies – the four congresswomen — Alexandria Ocasio-Cortez of New York, Rashida Tlaib of Michigan, Ilhan Omar of Minnesota and Ayanna Pressley of Massachusetts — known as “The Squad.” He voted in favor of the replenishment of Israel’s anti-missile Iron Dome defense system, he expressed his opposition to the Boycott, Sanctions and Divestment movement, and went to the Israeli Consulate in Midtown Manhattan last year for a briefing about Israel.

But he has also expressed support for the Palestinian Children and Families Act, legislation that prohibits Israel from using U.S. aid for the detainment of Palestinian children by Israeli security forces in the Palestinian territories, and blasted Israel for not offering to distribute coronavirus vaccines to Palestinians living in the West Bank and Gaza.

He drew a strong condemnation from the Democratic Socialists of America’s national political committee following a congressional trip he took to Israel in November.During the weeklong visit – which was sponsored by the liberal Zionist group J Street – Bowman and his Democratic colleagues met with Israeli Prime Minister Naftali Bennett and Foreign Minister Yair Lapid, and toured Hebron, a Palestinian city in the Israeli-occupied West Bank. Several local chapters called on the movement, which supports BDS, to expel the congressman or commit to not endorsing him in the next election.

But, following a tense meeting with its leaders, the DSA announced it will hold off on further action and rather seek to engage with Bowman to change his position on the Israeli-Palestinian conflict. Bowman defended the trip, telling supporters it allowed him to better understand how the occupation is affecting the lives of the Palestinians in the region. He also criticized Israel’s leadership for its “arrogance” on the issue of establishing two states.

Participants at last week’s virtual meeting hosted by JFREJ leaders included activists affiliated with far-left groups like the DSA, IfNotNow and Jewish Voice for Peace. The overwhelming majority of the 100 members on the call praised Bowman’s “bravery” on the issue, and his willingness to learn more about Israel and the Palestinians, the group said.

Ultimately, the group came to a consensus that Bowman deserves their support, touting his nearly impeccable progressive credentials and pointing to his victory against former Rep. Eliot Engel in 2020, which proved that holding a hawkish position on Israel doesn’t solely guarantee re-election.

McCullough maintained that progressive Jews are not single-issue voters and “vote for candidates who stand for our values: care, compassion, equity, and a commitment to fight persecution and discrimination in every form.”

The group touted Bowman’s voting record and his support of progressive legislation, including his vote against President Joe Biden’s bipartisan $1.2 trillion infrastructure bill because it was not part of a larger, more progressive, spending bill.

The Jewish Vote is also expected to endorse Alexandria Ocasio-Cortez, the progressive trailblazer who shook up the establishment with her surprise victory in 2018.

The group will also consider endorsing non-incumbents in this year’s federal primaries. A steering committee will interview candidates who filled out a survey, which includes a question about support for the bill on Palestinian rights.